Madonna di Campiglio (TN), 27 July, 2013 – The winner of the first stage of the Tour de Pologne is Diego Ulissi (Lampre Merida). At Madonna di Campiglio on the finish line of the first of two historical Italian stages in Trentino that are opening the 70th edition of the Polish stage race, Ulissi beat Colombian Darwin Atapuma (Colombia), Pole Rafal Majka (Team Saxo-Tinkoff) and then Eros Capecchi (Movistar), Ivan Basso (Cannondale) and Domenico Pozzovivo (Ag2r). Far from the first positions of the group some of the most expected big as Vincenzo Nibali (Astana) and Bradley Wiggins (Sky).

It was a punctual start at 1:30 p.m. from Rovereto, with the sun shining down and more than 30 degrees celsius. It was a compelling, well fought stage from the get go and it was animated by the initial break made up of six riders: Marco Pinotti (BMC Racing), Serge Pauwels (Omega Pharma), Cedric Pineau (Francaise des Jeux), Bartosz Huzarski (Net App), Valerio Agnoli (Astana) and Bartlomiej Matysiak (CCC Polsat), who reached a maximum advantage of more than 8 minutes.

But the kilometers and the climbs with the Fai – sponsored GPMs on Paganella first and then on the Passo del Durone started making a selection. First there were only four riders left: Pinotti, Pauwels, Pineau and Huzarski and then there were only two, with Pauwels and Huzarski who were the last ones to peter out and give in when the best group caught up. On the climb towards Madonna di Campiglio the bustle broke out for the stage victory which saw Diego Ulissi triumph and thus capture the first yellow Skandia jersey as leader of the general classification. Ulissi also put on the white-red Lang Team jersey for the points’ classification.

“I was coming back to the races after a month off from competition and I didn’t think I’d be so competitive right out of the gate,” says Diego Ulissi. “It was a long, challenging stage, we took on three hard yet pedal-able climbs. It was hard work but I managed to keep up with the best and so in the final I tried to not give up because I knew I was one of the fastest riders in the little lead group. I’m very happy. The Tour de Pologne is a very important World Tour race and moreover this year we took off from Italy and this adds a larger sense of achievement. The goal was to come here to try and win a stage and I managed to do so right away. Tomorrow we have a very difficult stage ahead of us with the arrival at Pordoi and other riders are definitely going to try to attack me but I’m going to try to defend this jersey although I know it won’t be easy.”

Today even the Polish riders were major players. Bartosz Huzarski was one of the most active riders in today’s break and captured the cyclamen Tauron jersey for the classification of the mountain grand prix and the red jersey that distinguishes the most active rider in the group. Rafal Majka was third across the finish line at Campiglio and third in the GC; considering his fantastic climbing skills he can confidently look forward to tomorrow’s stage.

Tomorrow, Sunday, July 28th, the Tour de Pologne continues in Trentino; there will be the spectacular and difficult Dolomite super stage Marilleva/Val di Sole – Passo Pordoi/Val di Fassa for a total of 206.5 km with Alpe di Pampeago, Passo Costalunga and a climbing arrival on the Pordoi. The pro race will be anticipated by the climbing time trial on Pordoi open to everyone called “Pedalando verso il cielo…”- “Pedalling towards the sky…” dedicated to Pope Karol Wojtyla (starting at 10:30 with registration open starting at 8:30 at hotel al Lupo Bianco). 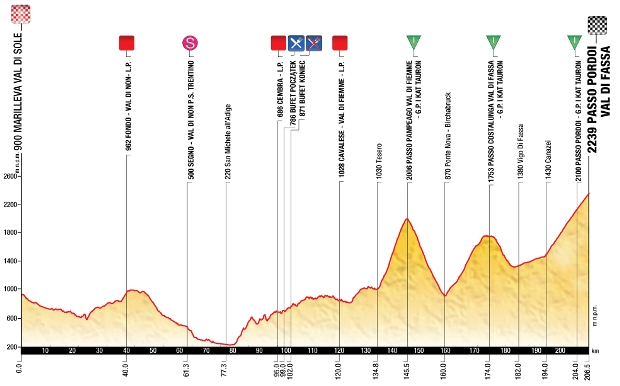 Christophe Riblon is the King of the Passo Pordoi