TOUR OF ALBERTA St.2: TWO-MAN BREAKAWAY MAKES IT THROUGH

(Red Deer, AB – September 05, 2013) Very high speeds were on the agenda once again today as the 2013 Tour of Alberta continued with Stage two, a 174.8 km ride between Devon, outside of Edmonton, and Red Deer. The group once again today enjoyed a beautiful day to race, with sunshine and blue skies all across the course. 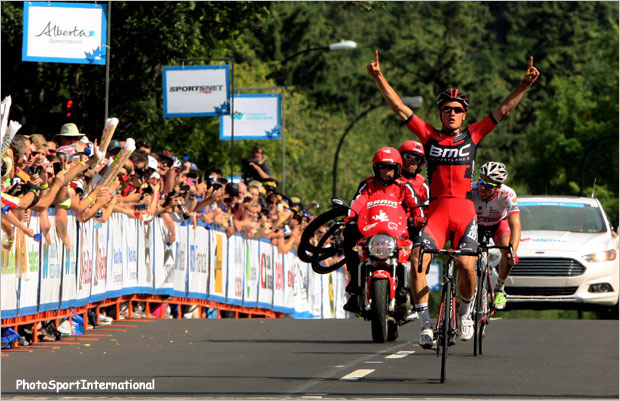 Despite leaving Devon 15 minutes later than originally planned due to the very fast speed from yesterday’s opening stage, where riders posted an average of 47.9 km/h, the group of 117 cyclists continued today with the high tempo, taking only 3:32:47 to complete the stage, averaging 45.3 km/hr

Two riders emerged in a break after the second sprint line in Ponoka with 75 km to go – Silvan Dillier of BMC Racing and Sergei Tvetcov of Jelly Belly Cycling Team. The break gained a maximum gap of 5:20, until the peloton decided to chase and attack. The two riders, two time trial specialists, worked well together and managed to stay ahead of the group entering the final laps.

The break managed to maintain their speeds and momentum in the three-lap circuit, and it is ultimately Sylvan Dillier who crossed the finish line first, with Tvetcov taking the second rank. The peloton sprinted for the third place, and it’s Peter Sagan of Cannondale Pro Cycling who completed the podium in third place, after launching the sprint early.

In the general classification, Peter Sagan is still sitting atop the standings, with a 0:26 lead over his closest competitor, Rohan Dennis of Team Garmin-Sharp. Rob Britton is the top member of the Canadian National Team in 27th place with a deficit of 1:07 over Sagan, while Antoine Duchesne still remains one second behind his teammate.

Canada’s Ryder Hesjedal is still sitting as the Top Canadian rider, wearing the Red Jersey in ninth place in the overall. Canada’s National Champion, Zach Bell of Champion System is sitting in 110th place of the general classification, after crashing yesterday.

Gord Fraser, the directeur sportif for the Canadian Team here at the Tour of Alberta, is impressed with with average speeds of racing: “For us, I think it was a good day. Jean-Sebastien [Perron] was on Sagan’s wheel in the finale. He said he was maxed out, but to have him up there in the hunt bodes well for the team… so far so good. Racing at approximately 50km/h for that long is difficult, and you can’t say that about races very often. They are certainly getting lots of speedwork.”

“Today was very much the same situation as it was yesterday, it was really a question of winds and how it would affect the race. With the wind turning from the north, we had a tailwind all day, with a speed in the peloton around 50km/h, for the entirety of the race.”

“Yesterday we just caught out a bit at the end, getting behind a split. We refreshed the guys this morning reminding them that it’s not over until they cross the finish line, and to encourage other riders in the peloton to keep the wheel. It happens, guys are tired and they have done their work, pulling the anchor and cause problems for others behind. These guys never stop learning, even at the professional level.”

Fraser was excited to see the break take the race today, after taking chances and launching the break attack: “Congratulations for both guys in the breakaway. It’s nice to see them rewarded for taking a chance. Sergie is a really aggressive rider. It’s too bad he couldn’t pull of the stage. It would have been good for domestic cycling and for Jelly Belly.”

The finish line spectators were treated to a great festival in Red Deer, with Country superstar band Emerson Drive entertaining the thousands of spectators awaiting the peloton to cross the finish line. Once again, the Tour of Alberta was embraced by local communities along the course, especially at start and finish locations.

This inaugural Tour of Alberta now makes its way to Southern Alberta for the last three stages. Tomorrow’s stage start in Strathmore, just east of Calgary, and end in Drumheller in the heart of the Canadian Badlands.

The Canadian broadcast partner for the Tour of Alberta, Sportsnet, will be airing the race live for two hours each day, along with daily one-hour highlights program to air in primetime each day of the race.