The designs for three of the Tour of Britain’s key jerseys have today been revealed ahead of this September’s race, which begins in Glasgow on Sunday 4 September. The new designs are for the Chain Reaction Cycles Points Jersey, ŠKODA King of the Mountains Jersey and Yodel Sprints Jersey, all of which are produced by Official Partner Dare2b. 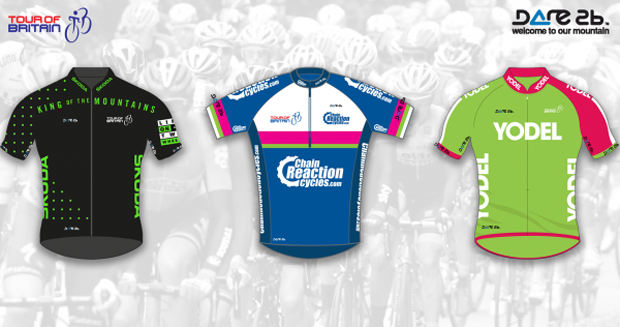 During the course of the 1,200 plus kilometres of this year’s Tour of Britain routes riders will contest 22 intermediate Yodel Sprints, sponsored by UK parcel delivery company Yodel. In addition to time bonuses, points awarded at the Yodel Sprints will count towards the Yodel Sprints Jersey, won last year by ONE Pro Cycling’s Peter Williams.

Dick Stead, executive chairman, Yodel, commented: “The Tour of Britain is a well-loved fixture in the UK’s sporting calendar and we’re delighted to be a sponsor for the sixth consecutive year. Like Yodel, the Tour is all about teamwork, pace and precision and we’re looking forward to some exciting sprint action in this special Olympic year. We’re proud to unveil our striking design for 2016’s sprint jersey, and hope to see rider’s fresh from Rio competing to wear it.”

This year’s Tour of Britain route will include some of the toughest ŠKODA King of the Mountains climbs in the history of the modern race including The Struggle in the Lake District on Stage Two and the summit finish of Haytor on Stage Six in Devon. The climb of the Cat and Fiddle in Cheshire’s Peak District on Stage Three is the longest of the race at over 10-kilometres and with the summit at 515-metres will be the highest point on the 2016 route.

In total riders will face 20 ŠKODA King of the Mountains climbs, with the final categorised climb of Bridge Valley Road in Bristol coming on the penultimate stage of the race on Saturday 10 September.

The 2016 Tour will see a completely new design for the ŠKODA King of the Mountains Jersey, with followers of the ŠKODA UK Facebook page helping to select the design.

“ŠKODA are delighted to be the official partner of the King of the Mountain once again. The response to this year’s jersey design has been extremely positive and we look forward to seeing it in action during the Tour in September,” said Erica Vernon, National Communications Manager, ŠKODA.

All three jerseys are produced by Official Partner Dare2b, whose Head of Marketing Helen Monks commented; “As Official Merchandise Supplier we’re excited as ever to be involved in producing and selling the jerseys throughout The Tour. These are some of the strongest designs we have seen to date and we look forward to launching them on our website in August and selling them at each stage of the event.”

In addition to the three jerseys Adnams will present a daily award to the leading British Rider in the general classification while official nutrition partners HIGH5 will present the daily combativity award.

Emma Hibbert, Adnams’ Marketing Director commented, “Adnams is proud to support the Tour of Britain and has been the official beer of the tour since 2011. We are delighted that this year we will also be presenting the Best British Rider Award at each stage of the race. Cycling is a growing sport and we know it’s particularly popular with our customers.”

“Carrying the fight, taking a chance where others won’t, and pushing the boundaries are all things we as a company strive to do which is why we are proud to sponsor the Combativity award at the Tour of Britain,” said Matt Hall from HIGH5.

The Tour of Britain is British Cycling’s premier road cycling event, giving cycling fans the opportunity to see the world’s best teams and riders competing on their door step.

About the Tour of Britain
Re-launched in 2004 after a five year absence from the calendar, the Tour of Britain is British Cycling’s premier road cycling event giving cycling fans the opportunity to see the world’s best teams and riders competing on their doorstep. The Tour of Britain is the UK’s highest ranked professional stage race and the country’s largest free-to-watch sporting event, organised annually by SweetSpot Group.

Ranked at the 2.HC level by the UCI, the Tour of Britain attracts the world’s top cyclists, including Olympic and World Champions and Tour de France stage winners, to compete on British roads each September, with three-hours of live coverage a day on ITV4.

The 2016 Tour of Britain takes place from Sunday 4 to Sunday 11 September.