2016 ONE OF THE LONGEST AND MOST CHALLENGING IN RACE HISTORY

The 2016 Amgen Tour of California route was released today, revealing a scenic but challenging course across nearly 1300 kilometers of California’s most beautiful terrain where the world’s most accomplished cyclists will compete for the overall title May 15-22, 2016. 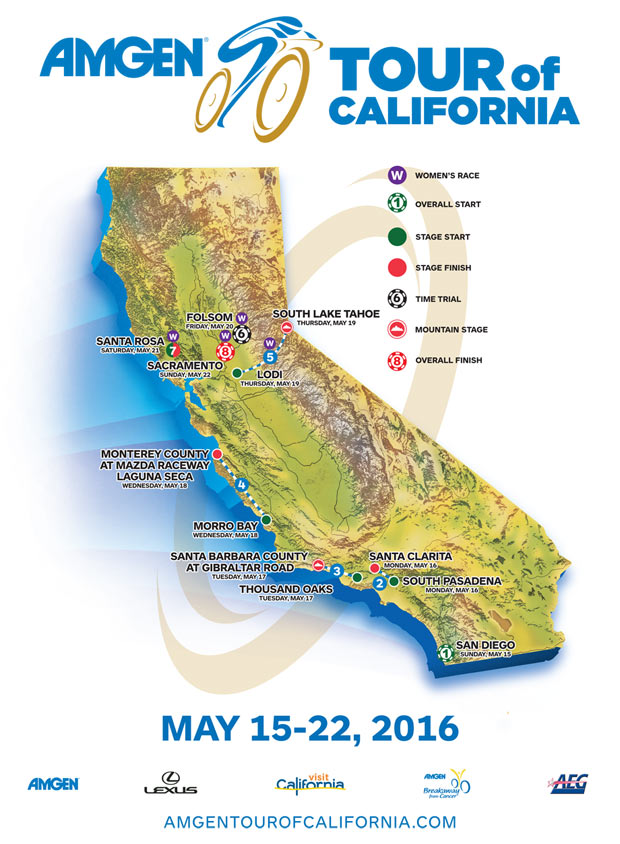 Another dimension for the Women race
Beginning May 19, an international field of lauded women cyclists will compete for four days with similar stage starts and finishes to the men’s course, doubling the racing excitement for many of this year’s host cities. The Amgen Tour of California Women’s Race empowered with SRAM is the first North American stage race of the inaugural UCI Women’s WorldTour and features the first Team Time Trial in race history.

A harder edition for the Men
For only the second time in Amgen Tour of California history, the race will progress south to north, beginning in San Diego and traveling through 10 additional host cities (four new this year) before a new champion is crowned in the state capital of Sacramento. The peloton will endure nearly 20 000 meters in height, including the race’s first ascent up the infamous Gibraltar Road in Santa Barbara County. This year’s route will offer varied scenarios, where sprinters, but also punchers and even climbers will have the opportunity to be seen.

For the men, the first day of racing will begin and end in first-time host city San Diego, the birthplace of California and the state’s second largest city. Then the sprinters will have another opportunity in stage 2, in Santa Clarita. But the day after, the queen stage will offer a perfect profile for the best climbers of the peloton. Fans and teams have long requested a finish in Gibraltar Road, and road conditions have finally made it possible this year. With each turn toward what is sure to be an epic finish, the peloton will experience magnificent views of Santa Barbara and the beach below. Then the punchers will have several opportunities in the following stage, notably in the finish of stage 4 in the famous Mazda Laguna Seca Raceway, a venue known worldwide for motorsports competitions. Stage 5 for the men will also mark the beginning of the competition for the women. Both men and women will race in an Individual Time Trial around South Lake Tahoe. It will probably be decisive for the final classification, which will be known on Sunday, 22 May, in Sacramento, the capital city of California. But like last year with the final victory of actual World Champion Peter Sagan for the men and Trixi Worrack for the women, the winner could be decided in the last moment of this very last stage.

Click on the image bellow to watch the presentation of the 2016 Amgen Tour of California: