Kristian Sbaragli took his first professional win ever by easily outsprinting the field at the first stage of the Tour of Korea (June 9-16 / UCI 2.2), and took MTN-Qhubeka p/b Samsung’s second leader’s jersey in a stage race. The young Italian won the sprint of an eight-man group by a cycle length to take not only his first season win but also the sixth win of the African team’s first Professional Continental season. After six top ten placings this season, the Italian finally made it to the top step of the podium.

His South African teammate Martin Wesemann made a large contribution to the win, having been away for some 100 kilometers both in a group and solo, and once caught, setting up Sbaragli for the sprint.

The Italian won the sprint in the Korean home of sponsor Samsung after 180.8 kilometers between Cheonan and Muju ahead of his countryman Albert Cecchin (Team Nippo) and Estonian Mart Ojavee (Champion System).

“What a great start, the team has been so motivated to get results this year”, said team principal Douglas Ryder. “Martin did an incredible job showing how he has developed the last 18 months and for Kris to get his first race win of the year after coming so close so many times is just fantastic for him. We will see many more victories from him now.”

The 23-year-old Sbaragli will now wear the yellow jersey of the race leader on the second stage of 142 kilometers from Muju to Gumi on Monday. In additon to having the overall lead, the Italian took the lead in the sprint ranking with his opening stage win.

Right from the start, the riders from MTN-Qhubeka p/b Samsung showed themselves to be equal to the other strong teams in the field. In a hectic start with many escape attempts, Johann Van Zyl and Songezo Jim tried to get in various break groups, before Martin Wesemann initiated the day’s escape with around 100 kilometers to go. Wesemann, Japanese rider Shinichi Fukushima (Team Nippo), Dutchman Thomas Rabou (OCBC Singapore), Chinese rider Yingchuan Gu (MAX) and New Zealander Jason Christie (OCBC Singapore) rode ahead of a large chase group around Sbaragli for about 80 kilometers.

In an exciting finale, Wesemann attacked on the last climb and tried to save his ever-shrinking gap with a solo ride on the last 20 kilometers. Although he was caught shortly before the finish, the win still went to his team as Sbaragali convincingly won the sprint.

The race in South Korea started this Sunday in Cheonan and ends after eight stages and 1,077 kilometers in Hanam. 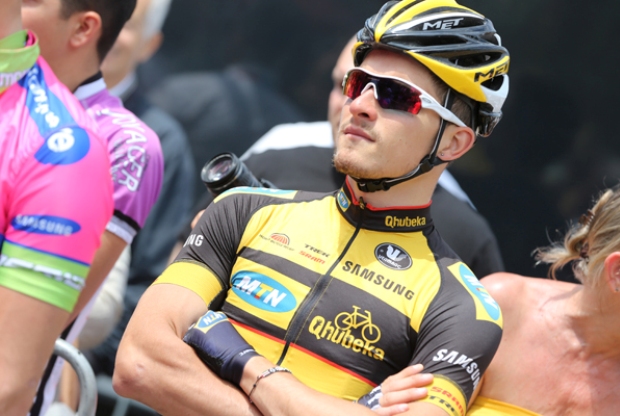 Seizing opportunities in the Skoda Tour of Luxembourg