Team MTN-Qhubeka p/b Samsung continues to shine in the Tour of Korea ( June 9-16 / UCI 2.2), as Dennis Van Niekerk was in the break group of the day, being caught within sight of the finish line, and teammates Louis Meintjes and Kristian Sbaragli finished fourth and fifth on the mountaintop finish of the third stage. Van Niekerk rode more than 90 kilometers in the day’s break group and fought hard for the stage win, taking off on a solo ride on the closing climb, but was heartbreakinlgly caught with only 200 meters to go.

Meintjes and Sbaragli were in the group which caught him, and all three finished in the same time, as did Johan van Zyl (12.), with Van Niekerk claiming 16th place. Meintjes and Sbaragli both claimed honors at the end of the stage for the South Afrian team, with Meintes being best young rider of the day and Sbaragli continuing to hold the sprinter’s jersey he has had since the first stage.

The stage win after 165 kilometer between Gumi and Yeongju went to Chinese rider Hau Liu (Max Success Sports), who caught Meintjes on the closing climb. Second was Norwegian Frederik Wilmann (Christina Watches) who was three seconds down. Third place went to Tour de Langkawi overall winner Julian David Arrerondo (Team Nippo), who along with Meintjes, was five seconds down.

“I am very pleased with the team’s performance today”, said a satisfied directeur sportif Kevin Campbell. “We rode positively and had a rider in every move. Dennis rode really well up front and was just short of a stage victory, but with 4 riders in the leading group we have plenty of options with days of racing to come.”

Wednesday’s fourth stage runs 156 km from Yeongju to Chungju. The race in South Korea ends after eight stages and 1,077 kilometers in Hanam. 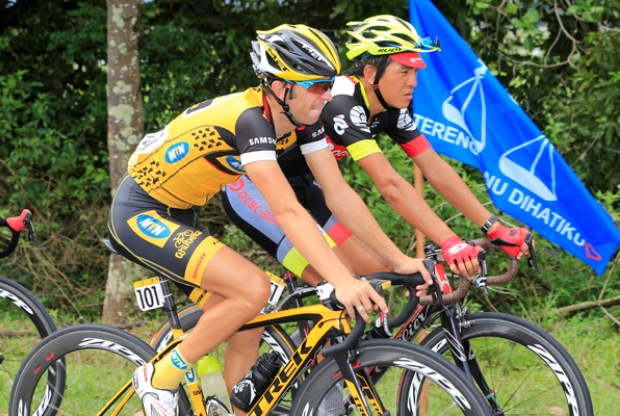