Tour of Luxembourg: Climbers and sprinters are asked for

MTN-Qhubeka p/b Samsung will take on the climbs and sprints of the Skoda Tour de Luxembourg (June 12-16 / UCI 2.HC) this week with its usual strong squad. Milan-San Remo winner Gerald Ciolek, who has shown his outstanding ability to come over the climbs and win the resulting sprint, and Spanish climber Sergio Pardilla will be the men in the spotlight.

“After we successfully rode the Fleche du Sud last year as a small African team, we are happy to be invited to the Tour de Luxembourg,” said sport director Jens Zemke. “We want to make a good impression and advertise for our project to get bikes to kids in Africa.”

The race opens Wednesday evening with a 2.5km prologue, with the speedy men expected to race around the city of Luxembourg in four minutes. The climbing starts the next day, as the 184 km from Luxembourg to Hautcharge includes six ranked climbs, including three category one. The climbers will be active again on stage two, with six climbs again. In both stages, however, the final climb is far enough away from the finish line that the peloton ought to have enough time to get back together.

That is just a warm-up for the third stage, 178.8 km from Eschweiler to Diekirch, with eight climbs, all of them ranked category one, and the last one less than 10 km from the finish line. The race ends up with six climbs on the fourth and final stage, but the final climb is followed by six laps of a 5.5km circuit course in Luxembourg City, with a mass sprint expected. 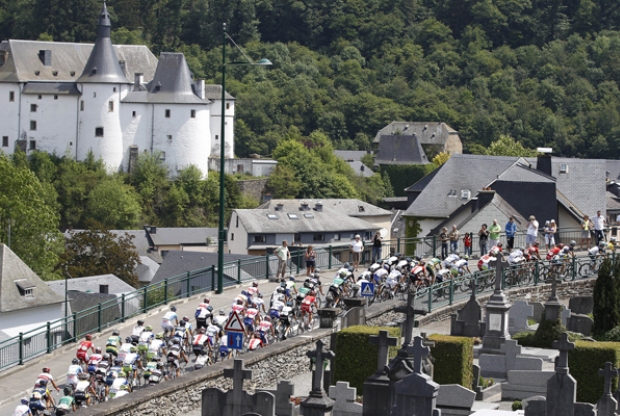