Neilson Powless notched his 11th podium finish of the season Thursday with third place in the Inner Loop Road Race at the Tour of the Gila.

The Axeon Hagens Berman Cycling Team rider took over in the sprint when teammate Justin Oien dropped his chain on the run-in to the finish. Travis McCabe (Holowesko-Citadel presented by Hincapie Sportswear) won the stage ahead of Marco Canola (UnitedHealthcare Pro Cycling Team). Powless was a further two seconds back.

“When we got to the final right hand turn, I looked back and it was kind of blown to bits,” Powless said. “I saw McCabe attack through the final corner but I was kind of gassed from trying to stay at the front. It was just a matter of trying to hold off (race leader) Lachlan Morton. We were kind of neck-and-neck in the final 500 meters. I actually sat back down and tried to get a couple seconds of recovery before sitting up to sprint with 50 meters to go.”

Oien – who was celebrating his 21st birthday Thursday – said his bit of bad luck struck on the second-to-last corner, about a kilometer from the finish.

“We had to jump a median and something happened and my chain dropped,” he said. “I tried to get it back on as soon as possible. But by the time I got it back on, I had lost 20 or 30 spots. I was really happy to have made the front group and the guys said they were going to work for me.”

A third Axeon rider was also in the thick of the action until the waning minutes. Tao Geoghegan Hart attacked over a small rise 13 kilometers from the end of the 122.6-km race. The winner of Trofeo Piva was joined in the escape by Robin Carpenter (Holowesko-Citadel) and Evan Huffman (Rally Cycling).

“I knew if something went up the road, it was a good time to follow it because a lot of guys were gassed,” he said. “We would either be in the move or we would have to chase. So it was better to be in it. I was hoping our guys could sit in for the sprint and the other teams would be forced to chase. For awhile, it looked like we would stay away but we were caught with about five kilometers to go.”

In the overall standings, Geoghegan Hart remains best-placed for Axeon Hagens Berman in 10th place, 2:17 back of Morton, who kept the lead after soloing to win Stage 1 Wednesday. Powless is 2:42 off the lead, in 13th place.

“In the end, it favors someone who can put down a lot of power for a long time,” Louder said. “Tom Zirbel (multi-time U.S. national time trial champion) has won it several times. It is a windy course and the downhills are not conducive to lighter people. So it is a course that suits a true time trialist.”

Powless, the current leader of the USA Cycling Pro Road Tour, will be looking to move up in the overall standings on the strength of a good performance, just as he did at the Redlands Bicycle Classic last month. There, he won the time trial – one of his four victories on the season – on the way to a runner-up finish overall.

“I think it’s good for me because I don’t think I’m am quite as strong in a dead flat time trial,” Powless said. “This course has a little bit of everything which makes it good for Tao and me. I think we will both hopefully be able to pull off a good result.” 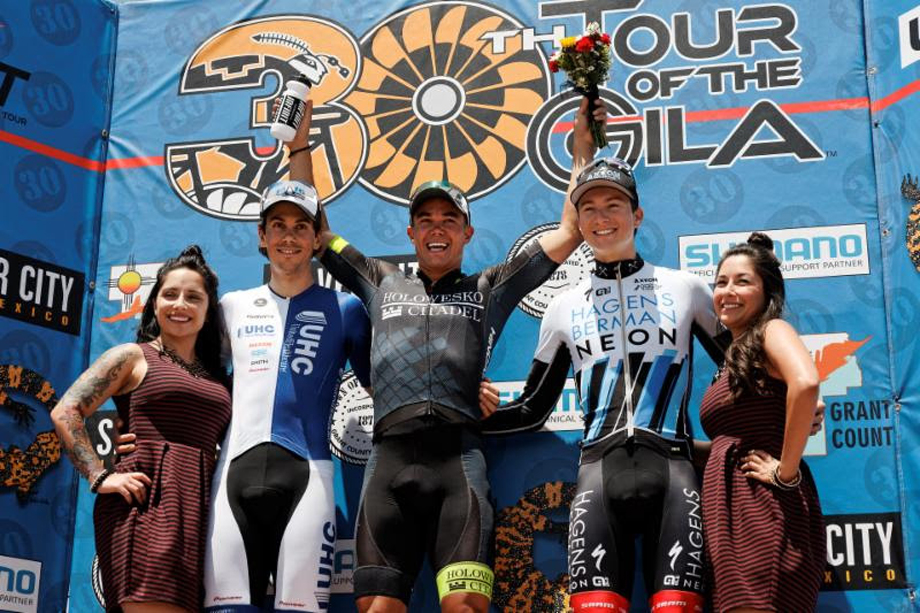 Axeon Hagens Berman’s Neilson Powless (second from right) was on the podium for the 11th time this season Thursday at Stage 2 of the Tour of the Gila. (Davey Wilson photo.)

Jasmin Glaesser Wins Stage 2 of Tour of the Gila