Tour preview with All Nine Riders

André Greipel, who turns 34 on 16 July, aims for an eleventh stage win in his sixth Tour de France.

“The run-up to this Tour has gone smoothly. In the first part of the season I had a difficult time because of an injury, but then I had a successful Giro and at the Tour de Luxembourg and Ster ZLM Toer I prepared for this race. Sunday I won the road race at the German Championships and I am really proud to wear that jersey again for one year. I came to the Tour with lots of confidence. Last year was wonderful with four stage wins, but Saturday we all start from scratch. The goal is to win at least one stage this edition and depending on when I achieve that one I can aim for another one. Saturday is the first opportunity, with the yellow jersey as extra reward for the winner. I can rely on the most experienced lead-out I’ve ever had, with Jürgen Roelandts who is part of my train again this year. The team is almost entirely built around me, the fact that the team has that much confidence in me, makes me happy.”

The Gorilla can count on Greg Henderson (39) once again, for whom this is the fifth Tour participation.

“I had a difficult spring, due to injuries, I’m happy that’s over now and that I can ride the Tour. Experience is of the utmost importance in the sprint, definitely at the Tour, and we have loads of experience in our team. Each team can select five good or even fast riders, but that’s not enough to win a stage. You need that experience. You have to do your homework, before the Tour and before every stage. You have to make a thorough study of the finish and discuss the tactics. A good timing is important as well, you need to move to the front on the right moment and trust each other 100%, know each other and know how the other will react. You need to be able to cope with the stress and pressure and keep cool. You win together and you lose together.”

Marcel Sieberg (34) is happy to help out his friend André Greipel during his seventh Tour.

“We would love to win the first stage and conquer that yellow jersey. In 2013 in Corsica and 2014 in Yorkshire there was already a chance to take the double, but then we didn’t succeed in it, one time because of mechanical problems. Hopefully luck is on our side this time. Jürgen Roelandts is part of our Tour team again, so we really have a strong lead-out. This will be my seventh Tour and taking yellow in the first stage would be a dream come true for me, André and the entire team. It’s one of the highest things you can achieve in cycling.”

Jürgen Roelandts, who turns 31 on the day of the first Tour stage, didn’t ride the Tour last year, but he’s back now for the sixth time ever.

“At first instance the Tour wasn’t part of my race schedule this year. I did the Giro together with André and then we started talking about the Tour. I was already thinking about riding the Tour again by that time. I had already told Jens Debusschere during our training rides that I would like to ride the Tour together. That will happen now, I’m looking forward to it. It was a really successful Giro with three stage wins for André and now we will hopefully have a successful Tour. We have a strong sprint train with Debusschere, Hansen, Henderson and Sieberg. We are one of the strongest trains in the world. The first stage is already important and I hope we can prove what we’re worth that day. It would be great to win more than one stage with the team, just like in the Giro. An early win on Saturday would lift the pressure, but that isn’t easy in the Tour.”

Adam Hansen (35) is about to start his fifteenth consecutive Grand Tour, his seventh Tour ever, which he hopes to complete.

“I have a double job: work for André and have a go of my own in other stages. Saturday we have an extra motivation, to conquer that yellow jersey. If everyone one can perform 110% and luck is on our side, then it could work. I hope that I can be part of a breakaway that gets to the finish in one of the stages. There will be opportunities in the second and third week. I’ve already won a stage at the Giro and Vuelta and it would be fantastic to add a Tour stage to that list. Maybe I quit the Tour afterwards (laughs). No, this is my fifteenth consecutive Grand Tour and of course I would love to reach Paris. For the second year in a row, we don’t have a GC rider in our team and that’s an advantage for me. Otherwise you always need to work for him. Now I can choose my moments to attack and stay quietly in the peloton for a day for example, to be fresh enough to join a breakaway the day after.”

Jens Debusschere (26) rode La Grande Boucle for the first time in 2015 and this year he is again selected to defend the Lotto Soudal colours.

“The first week wasn’t easy for me last year. I crashed hard and bruised my hand. Despite the injury it was of course great to be part of such a successful team. My role will be comparable to last year, I will be a member of the sprint train. When there is a sprint André is our man, there is no doubt about it. Only in exceptional circumstances, when André isn’t part of the first group because of a certain reason, I will sprint, but we don’t assume that will happen. The first stage is a big opportunity for our team, which we are looking forward to. It’s always nice to win early in a stage race. The typical weather here in Normandy could cause some spectacle and that would be good for us.”

Thomas De Gendt (29), who isn’t scared to ride hard, can also show his capabilities in his fourth Tour ever.

“I came to the Tour with a good feeling. I tested the legs at the Belgian Time Trial Championships last Thursday and in the road race on Sunday I rode solo in front for a while. I am ready to give the best of me the next three weeks. My role will differ from day to day. In the sprint stages I will need to control the break and at the end I could help the guys of the sprint train by getting them well positioned into the last kilometres. I can aim for a stage win myself in transition stages or in the mountains. Despite my rib injury last year I did came close a few times. Who knows I could also perform strong in one of the time trials. Wearing the polka-dot jersey is also a dream. I study the route of each stages. You need some luck to get in a break, but it also depends on other factors. Do I need to work for André the day after or have I already spent lots of energy the days before? I very much hope I won’t crash, in the past I already crashed two times on the first stage and also now it will be risky with the battle for the yellow jersey and the wind.”

28-year-old Tony Gallopin is about to start his sixth Tour ever. Just like Thomas De Gendt he did an altitude training camp in the Sierra Nevada to prepare for this time of the year. Tony is keen to show something in his home country.

“I would immediately sign for a Tour like 2014, where I won a stage and could wear yellow for one day. It’s my goal to win a stage again this year. I already looked at the road book and there are several opportunities for a rider like me, but I’ve learnt to see day by day and not to try to force anything. My experience of the past years has taught me how to cope with that. The second stage is indeed something for punchers, for riders who are suited for the Ardennes races. I hope that I can play a role on Sunday. A stage win with André in the first week would already take away some pressure, the sooner the better. 2015 was an incredible Tour for the team, with four victories from André. It’s really motivating to be part of a team that’s so close and strives for a common goal, but on the other hand it’s also stressful and demanding. The good atmosphere does outweigh the difficult moments, though. We can only hope for the best.”

Last but not least, Lars Bak (36) is also part of the Lotto Soudal line-up. The Danish rider crashed on the last day of the Giro, almost five weeks ago, and incurred a broken shoulder blade and six fractured ribs. Bak did have a speedy recovery, tested last week at Halle-Ingooigem and is ready for his sixth Tour.

“This is the sixth consecutive year I will ride the Tour. You will see me a lot at the head of the bunch, controlling the gap on the breakaway. There are other riders who will be part of the sprint train for André. With André and Tony we have two possible stage winners in our team, we can be sure of that. There is always pressure, but we have already achieved our goal in this kind of circumstances many times before. We have a lot of Tour experience and that’s an advantage as well. It’s a miracle that I got ready for the Tour after my crash at the Giro. The doctors gave me the all-clear. Physically I was probably better last year, but I am definitely capable of doing my work. I will make sure I take sufficient rest and take care of myself even more than other years. I will visit the doctor and physiotherapist often, to get through these three weeks.” 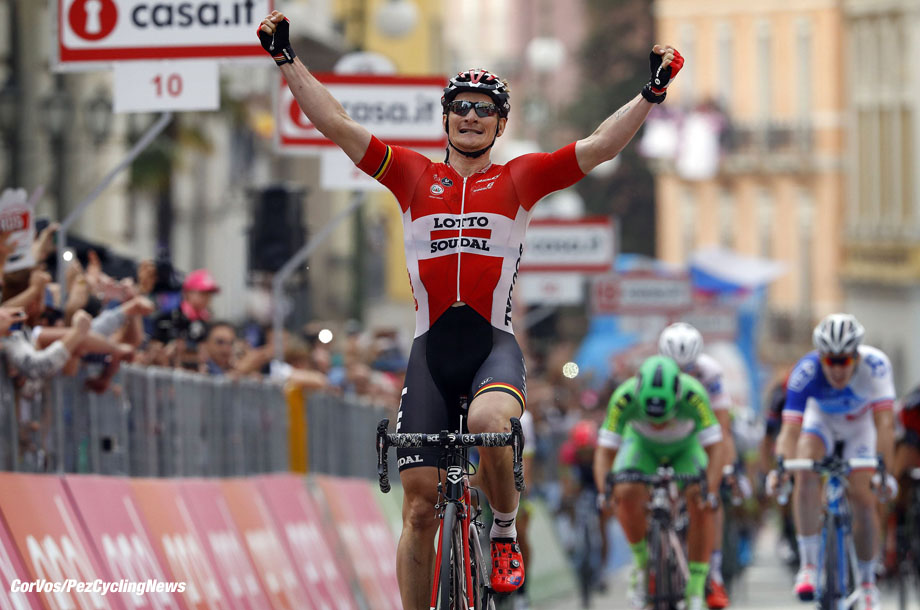