Bontrager’s Daytime Running Lights designed to increase rider visibility to motorists during hours most cyclists are on the road.

To raise greater awareness of the measures cyclists can take to increase their visibility to motorists and pedestrians, Trek-Segafredo riders will compete in the Giro d’Italia’s time trial stages with Bontrager Flare R taillights affixed to their bikes. Flare R is one of the world’s first lights designed specifically for cyclists to use to be seen in daylight and is visible up to 2 km away. A key component to the brand’s overall safety crusade to increase the safety of cyclists while on the road, Flare R taillights were first ridden in competition in the 2015 Giro.

The design of the Flare R takes cues from the auto industry’s findings that once installed, daytime running lights helped reduce car collisions by 25%. According to recent studies, cyclists carrying front and rear daytime running lights can effectively decrease the likelihood of a collision by up to 33%. Trek-Segafredo riders’ Speed Concepts will be equipped with the light set in “Day Flash” mode—a pattern of flash and brightness designed specifically to increase a motorist’s awareness of cyclists when approaching from behind.

“It’s not just about being visible. Everything in front of you is visible,” said Trek-Segafredo Team Liasion Matt Shriver. “It’s about making yourself standout. If I look in front of me, everything is visible to me, but I’m only focused on one thing. Flare R is intended to force the eyes to focus on the rider when approaching from behind and thereby recognize it as a cyclist and do what it takes to avoid them.”

While professional time trial events operate on closed courses and rarely present any potential collision with an automobile, Trek has tabbed its marquee professional team at one of the year’s biggest races to promote one of the brand’s most important messages. “We’re grateful to the UCI and to Giro d’Italia race organizer, RCS, for working with us to make this happen. It’s a bit unorthodox and maybe even goes against some common sense in terms of performance but when you think about how important rider safety is, anything that can help get this message across is a worthy venture,” said Trek’s Brand Manager Eric Bjorling. 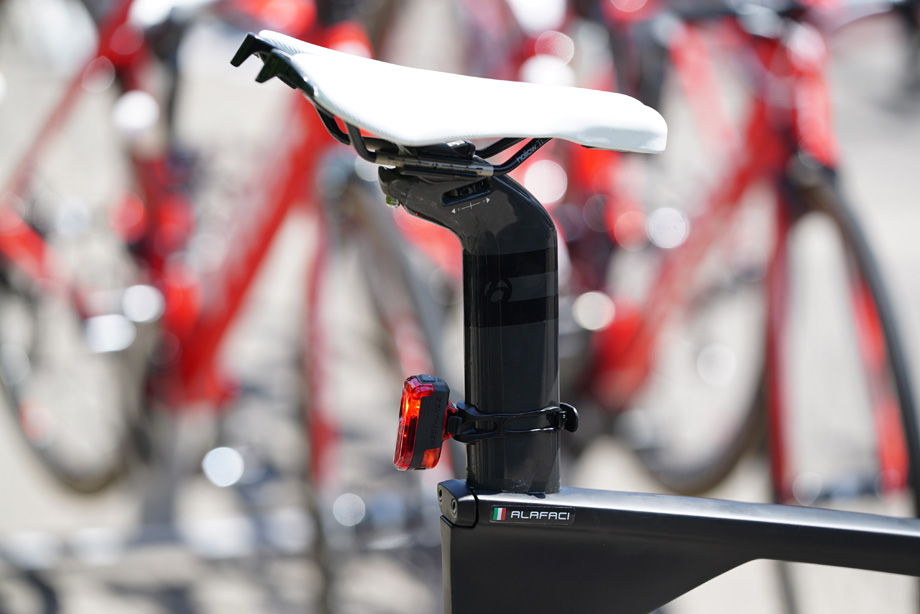