(Waterloo, WI/Baal, Belgium) – After weeks of speculation, Trek Bicycle is unveiling a new line of standard-setting carbon fiber cyclocross bikes with the announcement of the all-new Boone. After considerable amount of time in development with the world’s premiere cyclocross racers, Boone is ready to hit the stage as Trek’s first full line of carbon cyclocross bikes. The bikes were debuted underneath Trek’s dynamic duo of World Champion Sven Nys and World Cup Champion Katie Compton, at the Grand Prix Sven Nys in Baal, Belgium. 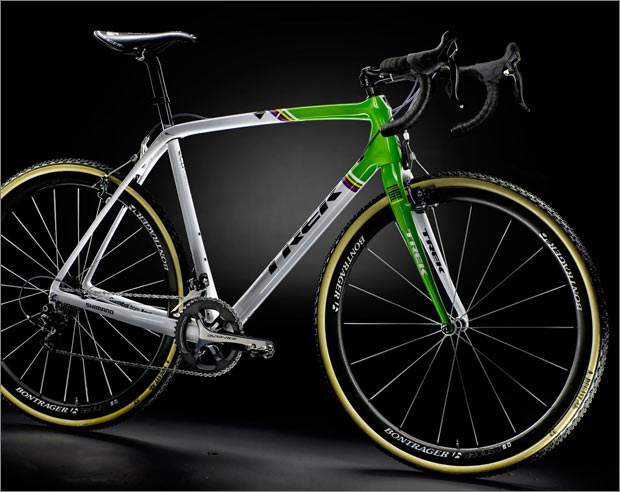 The revolutionary IsoSpeed decoupler, the key feature of Trek’s ground-breaking Domane line of endurance road race bikes (read the PEZ review here), has been adopted by Boone’s engineers in a match made in cyclocross heaven. By isolating the top tube at the seat tube, IsoSpeed doubles the vertical compliance of the frame without any negative effect on power transfer. IsoSpeed is a proven technology that creates a more seamless ride leaving the rider racing faster, stronger for longer periods of time. The adaptation of IsoSpeed for Boone is designed to incorporate all of the ride qualities while leaving more room for shouldered carrying.

Boone’s OCLV carbon construction creates one of the lightest cyclocross frames on the market while being reinforced with Trek’s Carbon Armor to ensure the bike can race as many days as you need it to. The new internal battery mount and 3S chain keeper borrowed from the Domane line remove the concern of shifting through the elements.

Boone’s geometry was designed in partnership with cyclocross phenom Katie Compton. After numerous rounds of revisions and refinement, Boone’s pure ‘cross geometry is fast, powerful, and smooth enough to dominate the most challenging course conditions. The bike was well underway when it was first handed to Trek’s newest athlete, World Champion Sven Nys to experience. His feedback? “It’s perfect.”