The city of Fiesole presented today in the Casa Marchini Carrozza the official courses for the UCI Road World Championships. Fiesole, along with Lucca, Montecatini Terme, Pistoia and Florence will be one of the hosts of the competition, which will also be an occasion for these cities to experience this quintessential sports event.

The Mayor Fabio Incatasciato, absent from the press conference but always present to underline how extraordinary this world championship is, commented in a written note “Such a popular and beloved sport as cycling – a sport which lives on the street, close to the people – will bring much more than sport to the city: it will bring us art, services, culture, entertaining and restyling of our local streets”.

The deputy mayor, Giancarlo Gammannossi, follows him on this train of thought: “I can still remember the excitement when the UCI inspectors visited our city for the first time to verify whether the World Championship could be held on our streets. Now that the World Championship here is a reality, all of us, and especially citizens of Fiesole, will have to transform it in a great celebration of sport and civility. Soon we’ll present the digital APP and the web page dedicated to the championship, which were created by the Mayor’s office with the specific intent of making it possible to access information anytime and prepare for the competition in the best way. I’d also like to remind that the works which are being carried out to repave the streets might create discomfort in the short run, but they will leave us with perfect streets and a better city.

Councillor Luciano Orsecci, responsible for Sport, declares: “The reaction of the people of Fiesole during the Giro d’Italia 2013 was extraordinarily enthusiastic. This city, which is already part of the most beautiful rural landscapes in the world, will live a memorable sport experience in September that will hopefully act as a springboard for cycling in Fiesole”.

It is also for this reason that the Council organized many other accessory events, in collaboration with the Associazione sportiva Sportissimo Fiesole. These events are bound to animate the period preceding the championship and juice up summer in the city.

Councillor Paolo Becattini, responsible for culture, declared: “It’s impossible not to talk of art in this World Cup: it is everywhere, starting from the logo created by Master Alinari. Fiesole has also prepared a series of events and cultural facilities: extra-time openings for museums, an exhibition dedicated to the Maestro Primo Conti (hosted by the Museo Civico) and the exposition of the original manuscript of the Futurist “New Old bicycle” (dated 1975-1980). Finally, different art installations around the city will create an itinerant exhibition on the theme “Cycling and Culture”.”

Roberto Maggini, coordinator of the COL Fiesole: “I’d like to take a moment to commemorate the scientist Margerita Hack, who died last Sunday and was a great Florentine cycling enthusiast. She would certainly be happy to see Florence “invaded” by cyclists. Citizens should live this experience the same way: of course it will cause some occasional discomfort, but it will also be a celebration of sport, not to mention the positive impact it will have on the economy and on the city’s international visibility”.

Director General Claudio Rossi closed the conference mentioning some of the most important figures of Italian cycling: Gastone Nencini, who was somehow “present” thanks to his daughter Elisabetta, the unforgettable head coach Franco Ballerini and extending a warm greeting to Alfredo Martini, who has always been at the frontline for the World Championship, in spite of the fact that he could not be there for the conference.

Roberto Poggiali: “I am a true-blue Fiorentine, born under the Torre di Arnolfo. Fiesole always represented a challenge for me, it has been my personal training area and my visiting card whenever I took part in competitions side by side with Moser and Gimondi. I hope that the city will become a main actor in this competition.” 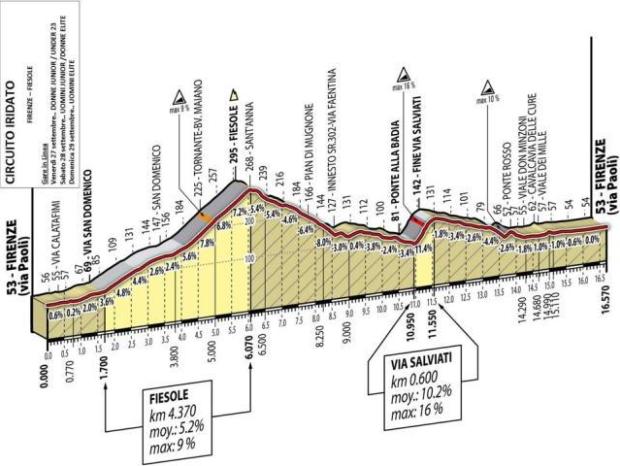 “Riding Towards the Sky…”