Anniston, Alabama, played a most hospitable host to the Sunny King Criterium, the official entry into the 2015 USA Cycling National Criterium Calendar.

The mercury dipping south of 50 didn’t dampen the enthusiasm of the deep crowd lining the boards or cool the jet power of the 54 Pro Women at the line. Just five minutes in, the Anniston ATM cracked open with $200 lining the back pocket of Coryn Rivera (UnitedHealthcare). Throughout the 60-minute contest, $1,500 in primes was tossed out with UHC securing a majority of the cash and, ultimately, pole position. 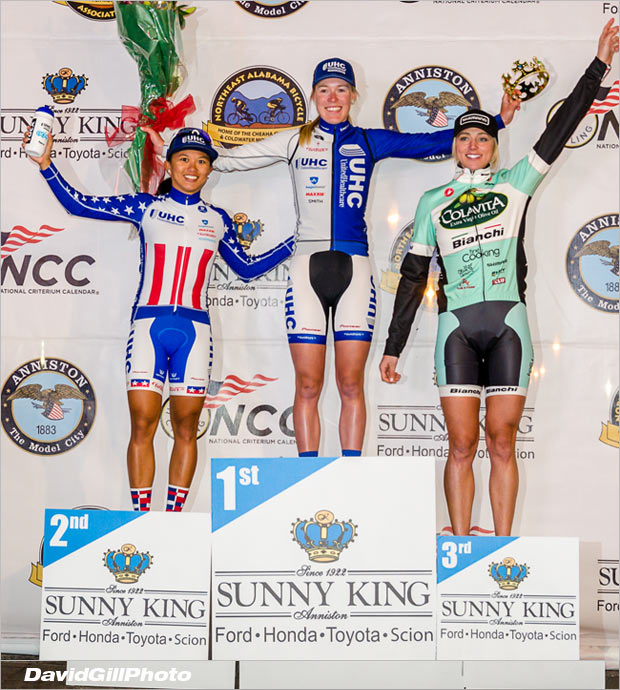 Once the bank closed, UHC remained up front with the Colavita/Bianchi pb Fine Cooking squad falling in line close behind. In the final lap, the UHC blockade grew from three to five with Rivera and Erica Allar (Colavita) engaged in a fierce shell game. The frenetic finish brought fans over the barricades, as Hannah Barnes (UHC) claimed the Sunny King crown and the first NCC victory of the year. Barnes’ teammate Rivera finished second with Allar rounding out the podium.

The Pro Men shot out of the chute with a vengeance and maintained a healthy pace for each and every seven-tenth of a mile lap. But not before an operatic opening National Anthem and a marriage proposal. Fredd Matute (Performance Team by Rossetti) gave his girlfriend Holly Horner the ultimate call-up as he dropped to one knee – one hand on Horner and the other on his bike – to ask for her hand in marriage before a massive crowd, flashing cameras, and 120 fellow cyclists. She said yes.

As it did for the Pro Women, the cash tree shook and showered, for the most part, the seven-man break, which carved out a nearly 30-sec gap within the first 30 minutes. The seven stallions: Clay Murfet (Astellas), Colavita’s Ruben Companioni and Andrew Dahlheim, Hincapie Racing’s Mac Brennan and Ty Magner, and UnitedHealthcare’s Hilton Clarke and Luke Keough.

The temperature plunging as Anniston fell under an evening freeze warning, the heat on the course was explosive as the stalwart seven lapped the field. The energy was palpable as Brennan and Dalheim made a temporary break but UHC formed a train and blocked the track. The cash cannon smoldering and Brennan now slightly smoked, it came down to UHC and Astellas in the penultimate lap. But Hincapie was intent on taking risks, and their marvel Magner brought home the Sunny King Criterium win and the USA Cycling NCC Points Leader jersey. UHC’s Keough and Clarke took second and third, respectively, in downtown Anniston. 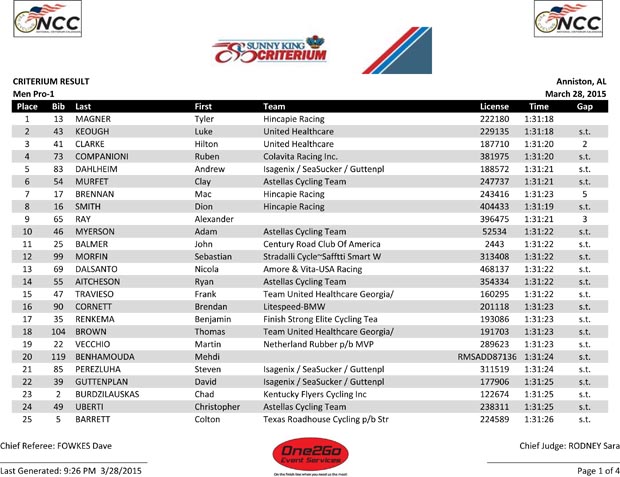 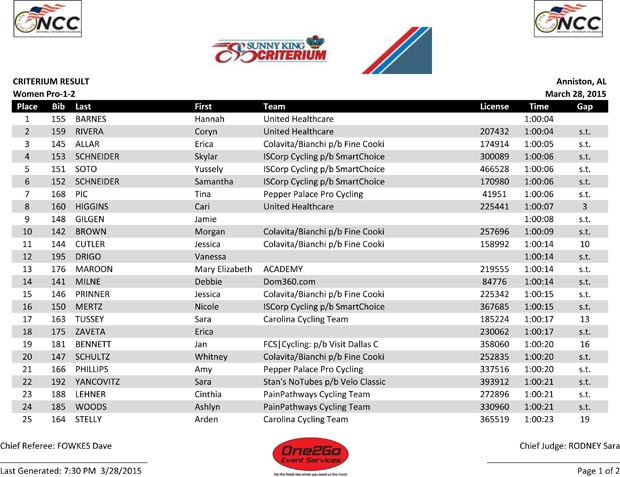 Inside The Taipei Bike Show