Alejandro Valverde tackles the final five days of the 2013 Vuelta a España with his sights set on the three decisive, mountain-top finishes: Peña Cabarga (Thursday), Naranco (Friday) and the L’Angliru showdown on Saturday.

Alejandro Valverde spoke to the media on Tuesday during the second rest day of the 2013 Vuelta a España, sitting in third place overall, 1.14 behind leader Vincenzo Nibali (AST) and fourty-six seconds down on second-placed Chris Horner (RLT). These were some of his words:

After yesterday’s stage, are you feeling a bit more confident towards trying to take over the lead?
“Yesterday’s ride was a bit of a boost for us – we have realized we have more chances to win the Vuelta. The team is doing really great and after two really demanding days we all were feeling a bit out of energy, but we still gave everything we had to make the race harder. It might have been due to our strategy that Nibali showed some weakness. Initially, we were trying to set things up for me so I could win the stage, but having José Herrada into the break, after his great performance in this Vuelta, made us choose to play our cards with him, though unfortunately, we couldn’t complete the strategy with a win. The team feels reinforced after these two weeks: they’re lucid, willing to keep pushing, in good spirits.”

Where do you think the key point of this Vuelta will be?
“There are two days suitable for making gaps: Peña Cabarga and L’Angliru. Naranco is an important stage and the route offers room for improvements, but I think the other two are harder, more decisive, and should we feel strong, we’ll try to squeeze our chances. To me, the most important stage will be L’Angliru. Gaps are still short, and I think we can get to that day in the same situation – there, we won’t save any energy, it’s all or nothing. If we get to that point with these gaps, anything can happen. I think a minute or a minute and a half might be enough for anyone getting in red to that climb, but it would be close and hard to retain the jersey if shorter. Playing myself an all-or-nothing for a chance to win? Well, I might give it a shot. If I see a chance for an early attack or feel there’s some rival in trouble and I’m strong enough, I’ll take the chance.”

Can we say Horner is the strongest in the field even though Nibali is in the leader’s jersey?
“Nibali has been really strong so far – he’s still the man to beat along with Horner, but he showed some weakness yesterday. I had already seen him going through a bit of trouble the day before, and yesterday everyone could see that, while we were all a bit on our limit, he was a little step behind. Horner lost too much time at the time trial; leaving that day aside, he’s proving even stronger than Nibali in the mountains and could well be in the leader’s jersey. We weren’t counting on him so much at the start, but his exhibition in Haza Llana made us take him fully into account. He might be the most difficult rival for Nibali: he’s just twenty-eight seconds behind, while I am 1.14 back, and though Nibali might be fearing the three of us – myself, Horner, Purito , it’s Horner who is the closest to him. He didn’t show any weakness after these days of cold, rain and long rides, and having this rest day and tomorrow’s stage, not so hard, I really doubt if he will pay all the efforts of these three weeks and drop.”

Where are you setting the line on those who can still contest the overall win? Are you still counting Purito in for the victory?
“Yes, of course – I still think Purito is fully into podium contention, though he’s the man at the bottom of the four and will have to take some earlier moves and see what happens. I think everything will come down to us four. Pozzovivo is doing well, too, but he’s not gaining any time on us in the mountains, always conceding a little bit every day. The victory will be betwen the four of us”.

Are you already feeling the bunch and the main favourites really tired after these two weeks?
“Yes, to be honest – everyone is pretty much shattered after such a long season, almost on their physical limits. Nearly all of the top guys have a GT on their shoulders, and that’s visible and can take its toll in the last few days. Nibali might have had a bit more time to rest after the Giro, and those coming from the Tour – Purito, myself – might be a bit more tired, but we’re really looking pretty equal, the GC guys and those on the back of the bunch.” 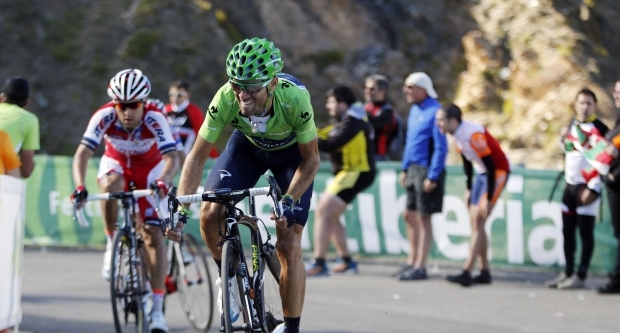 NetApp – Endura shows an outstanding interim result at the Vuelta

Inspired by the Tour of Britain?