The Bigla Pro Cycling Team lined up in the third World Cup of the season in Ronde van Vlaanderen on Sunday. The race was won by Italian Elisa Longo Borghini (Wiggle-Honda) after a solo attack while her teammate Jolien D’Hoore and Anna van der Breggen (Rabo-Liv) was second and third respectively. Annemiek van Vleuten finished fourth for the team, sprinting from the group for second.

It was an eventful day for van Vleuten who was part of a nine-rider lead group with 55km to go. After they were caught, van Vleuten attacked and spent 10 kilometres off the front on her own, being given a maximum gap 30 seconds.

“It was my best race of the season so far,” van Vleuten says. “I was in the front all the time, focused, and I made a good attack. We had a plan to attack and I did so and was alone in the front. I would have liked to have at least one rider with me because you lose a lot of energy there when you are by yourself.”

Longo Borghini countered van Vleutens’ move as the race approached 40 kilometres to go and enjoyed a lead that went out to a minute.

“They chased me back and I thought the race isn’t over, I was focused on recovery,” van Vleuten continued. “I knew that I’m really strong and I can recover from that effort. I really struggled to hang on on the next climb after they caught me but I managed to hang on so it was a good sign. I then expected Boels-Dolmans to jump across to Elisa Longo Borghini on the Oude Kwaremont or the Paterberg. They went hard but not super hard and the gap stayed like that.”

As the race tried to close the gap, five riders formed a chase group containing both van Vleuten and Moolman-Pasio.

“I surprised myself and could still follow [Elizabeth] Armistead and Pauline [Ferrand-Prevot] on the Paterberg. I think Ashleigh and I did a really good job to be there in a five-rider move. I was proud of the team to have two riders there. The information we got wasn’t so good and we didn’t think the gap was so big and we heard it was a minute with five kilometes to go so it was too late then.”

What was left was to sprint for what was left of the podium positions. The five rider group was joined by four others to make a nine riders. Several sprinters were in the move as van Vleuten explained.

“When the group came back I saw a lot of sprinters were there and I thought it’s going to hard for the sprint. I looked around and I thought it would be hard to be on the podium. If I am honest I went here for the victory and it would be nice for the team to be on the podium so it’s disappointing to be fourth for the team and for me only the victory counts. Until I attacked I didn’t have to do anything, the team did a good job and looked after me well. When I attacked it was the first time I was in the wind.” 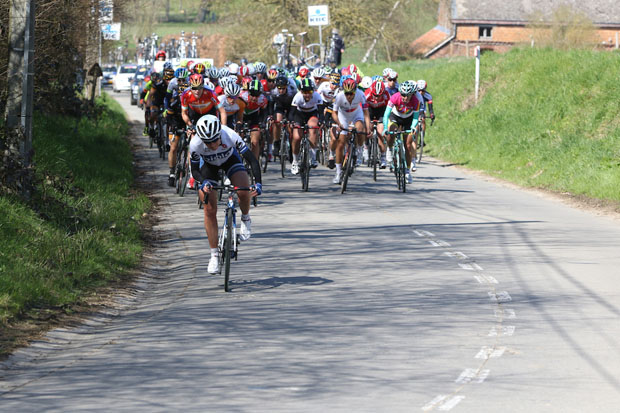 Zeeman with cards to play in Scheldeprijs