The Bigla Pro Cycling Team again showed it was on track to becoming one of the best teams in the world when Annemiek van Vleuten finished second during Wednesday’s Fleche Wallonne World Cup. South African National Champion, Ashleigh Moolman-Pasio, topped off a perfect job by the team when she crossed the line fourth, as the team placed two riders in the top four.

Below, General Manager, Thomas Campana, explains the plan was to surprise the other teams as everyone traditionally waits for the brutal final climb, Mur de Huy. Van Vlueten escaped with ‪Roxane Knetemann around the 20km to go mark. Knetemann was there to mark the move for her Rabo-Liv team who had a numerical advantage behind with four riders. Eventual winner Anna van der Breggen bridged across and with 4km to go on the Mur, made her winning move in a perfect display of teamwork for the Rabo-Liv team. Van Vleuten followed her and crossed the line 12 second later. She was followed by Megan Gaurnier (Boels-Dolmans) and Moolman-Pasio.

Annemiek van Vleuten
When Anna came across to me with 4km to go I knew it would be hard to beat her on the Mur but I’m very happy with this result. Usually this isn’t a race for me but with the team performance today, I didn’t have to do anything. Thomas did good work, inspiring me to believe in myself more and that I can go with a good result here and it totally worked out.

I could not believe that they hadn’t caught us at the bottom of the Mur and I thought this is going to be close. When I first attacked and ‪Roxane Knetemann‪ ‬was with me and she didn’t do any work, I was doing all the work so I thought when her team starts chasing, they will catch us. On the Mur I rode at my own pace because I didn’t want to blow too early. I knew I was doing a good job on the Mur because Anna wasn’t getting away from me that quickly and when I looked behind me I could still not see the others coming. With 250m to go I started to believe I could be on the podium and I gave everything. I am very happy.

Thomas Campana – General Manager
We needed to figure out a way to be strong today. The plan was to keep Annemiek and Ashleigh clear today so we placed Joëlle [Numainville] and Iris [Slappendel] with them and they did a perfect job looking after them. At 80km we opened up because everyone was waiting for the big climbs at the end. So we tried to split the group and first Joëlle put the pressure on the group and then we made a surprise attack with Annemiek. Everyone was waiting for the last two climbs so we thought we’d surprise everyone because Annemiek is a great time trialist. Unfortunately for us Rabo still had the numbers so they could chase. The team performance made a difference today and we are very happy because we didn’t have as strong numbers as the other teams. To make a podium in another World Cup shows we are on track and everything is going according to plan. 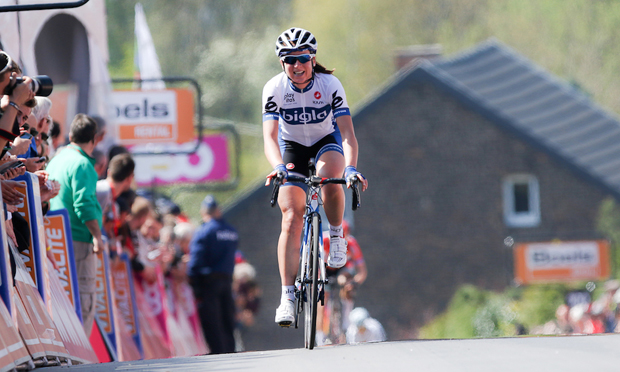 Area Zero-D’Amico-Bottecchia: Ready for the Tour of Croacia