Johann van Zyl added to an already successful Tour of Rwanda on Thursday by taking his first individual win as a professional during stage 4 of the African race. The result earned Team MTN-Qhubeka p/b Samsung its sixteenth victory of the season, the second most by any Professional Continental team this year.

“It was a long day at the front and I had to work hard for it and I’m thankful to the team who gave me the opportunity to attack. I was really happy to pull it off in the end,” van Zyl said.

The day started with van Zyl sliding into an eleven-rider group. This caused some concern for the team as Aron Debretsion (AS.BE.CO) who started the day fifth on the general classification, two minutes six down was present.
“Our Sports Director came and told me about Debretsion and I thought we are going to get caught,” van Zyl said. “I decided to go up the road and leave the group behind and our team worked on the front to catch the rest of them.”

It was the perfect scenario for the team until the South African national team decided to put its rivals to the test when Dylan Girdlestone attacked the favourites on a descent with 80 kilometres to go in the stage. Girdlestone eventually caught up to van Zyl during the last hour of racing and finished the day second, gaining two minutes 26 seconds to previous yellow jersey wearer Louis Meintjes.

“It’s good to get the win but I am sad for Louis,” van Zyl said of Meintjes who is his best friend. “But I know there are three hard stages to come and he’s the fastest rider up the climbs in this tour and I think he has the confidence to get the jersey back again. We’ve worked hard to get here and I think we have the power to turn it around.”

“Johann’s ride was very impressive,” Meintjes added. “I tried to get some time on the Eritrean rider who was second but I was unable to get a decent gap today. It’s unfortunate that Dylan rode away but it was pretty impressive from him. I think he deserved it but tomorrow is another hill finish and I am confident for that.”

Friday’s stage from Muhanga to Nyamagabe is 102,4 kilometres and finishes on a category one climb. 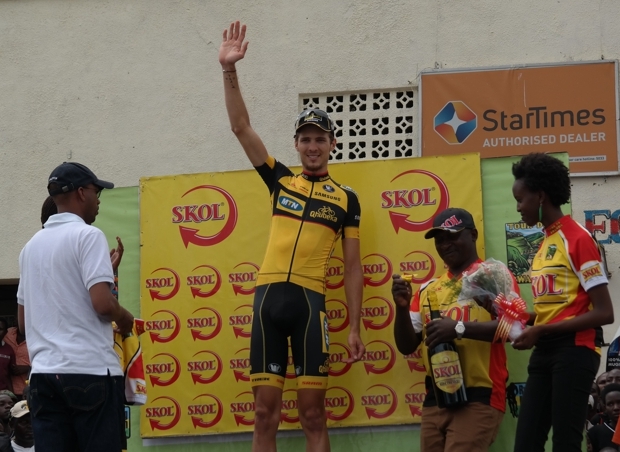