Kristof Vandewalle has claimed his third straight National Championship time trial title, stopping the clock at 56:42 for the 44.6-kilometer race.

Finishing in second was Tim Wellens of Lotto-Belisol in 56:58 and Pieter Serry (Omega Pharma-QuickStep) rounded out the podium less than a second later.

“Today the pacing and managing your energy was very important,” said Vandewalle. “I felt good this morning; I felt fresh. I am happy that today was a good day because I have been struggling with form lately, and I had the mental stress about whether I had good enough shape to win today.”

The course of three circuits included numerous corners and resulted in a difficult race to get into a rhythm, said Vandewalle:

“I focused on my own rhythm, and on the long stretches of two to three kilometers just before the finish that were false flat and on a big road. This is where I thought I could make the difference. The three laps had a lot of turns where you had to constantly attack again and again out of the corner. This cost me a lot in the last lap, it was very difficult to keep sprinting over and over again, but I kept my focus on the final kilometers to the finish where I knew I could make up time. Despite all the turns, it was a course for rouleurs; the biggest challenge was keeping your speed and tempo and to keep on pushing.”

The split times that were being called out during the race were incorrect, causing a lot of confusion. Trek Factory Racing director Luc Meersman, who followed behind Vandewalle, did not give Kristof the time differences during the race, which in the end turned out to be a good – and critical – decision.

“Luc was in the car behind me, and did not give me the time splits that were being announced. If I had heard that I was 17 seconds behind, which was announced at some point, I maybe would have lost motivation because I was going as hard as I could. He pushed me hard from the car, it is something that I really like – he helped me immensely today.

“I am super proud of these three titles! It would have been hard to say good-bye to the [National Championship] jersey today. After struggling in the last weeks I am very happy with winning the National title again.” 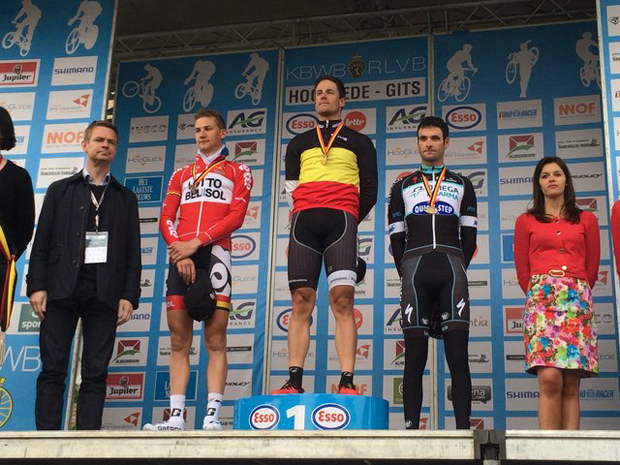