Vuelta a Colombia: Victory and lots of Experience

In the last stage at Medellin 2nd for Fabio Chinello and 3rd for Andrea Pasqualon.

Area Zero D’Amico’s Colombian adventure has come to its conclusion. The final tally for the young, all-Italian continental team led by team managers Ivan de Paolis and Andrea Tonti was definitely positive: one stage victory, two podium places, other important placements and even the jersey for best foreigner in the classification.

This Vuelta a Colombia was a thrill up to the very last metre, which saw Oscar Sevilla (Epm-Une-Area Metropolitan) score success only in the final stage. Places of honour went to Colombians and team mates Luis Fernado Camargo and Alexis Camacho (Boyaca se Atreve – Liciboy).

On Sunday, August 17th, in the 11th and last stage on the circuit in Medellin, Area Zero D’Amico almost scored what would have been the second victory in this Vuelta a Colombia, putting Fabio Chinello in 2nd place and Andrea Pasqualon 3rd in the bunch sprint won by Colombian Jairo Salas.

“It’s too bad, because we should have deserved another victory,” explains sports director Massimo Codol. “Even in the final stage the team did a great job in carrying the group to the final sprint and giving it a shot with our fastest men. The other day Pasqualon won; today it would have been nice to do so again with Chinello to even the score. We gave it a try, but for just a hair things didn’t go our way. However we are satisfied with the final accounting for Area Zero D’Amico in this Vuelta a Colombia. We scored a splendid stage victory with Andrea Pasqualon, on other occasions we came close to success and we also managed to capture the jersey for best foreigner with Paolo Ciavatta, who always performed well in the climbs and in the moments when the race was gruelling.”

“I’m very satisfied with what our team Area Zero D’Amico did in Colombia,” says team manager Ivan De Paolis. “We set out overall with the goal of gaining experience and instead we managed to figure as major players in the race. We knew the level was going to be very high, for Colombians la Vuelta a Colombia is a bit like what the Giro d’Italia is for us. Our guys are all very young and they had never tested themselves in a stage race more than 10 days long, furthermore with so many climbs and such high altitudes. It wasn’t easy but we proved to be worthy of the situation and we also scored a fantastic victory, the most prestigious result in the young history of Area Zero D’Amico. It was an important victory for the entire team, athletes and staff, which served as payback for the hard work we’ve done up to now. It’s a success that we dedicate especially to our sponsors, who believed in the Area Zero Pro Team project and who are supporting us in this adventure. I hope that these results and the good work the entire team has been doing can be useful in creating further interest around our project, which is focused on grooming young talent.”

“I’m proud of what the guys showed in the Vuelta a Colombia,” explains athletic coach for the team Paolo Santello. “We worked a lot during the summer through races, workouts and mountain training camps in Bormio, Valtellina. The results show. This is proof that hard work pays off. It wasn’t easy to take on 11 days of such intense racing but 7 out of 8 or our riders saw the test to the finish. Pasqualon and Ciavatta, who are the most experienced, did a fantastic job in finalizing the work of the entire team. But I’m sure all our riders have come away from the Vuelta a Colombia in good shape and with loads of experience that will be useful in taking on the end of the season in the best way possible. This should serve as an example to everyone else so that we face upcoming events with the maximum commitment.” 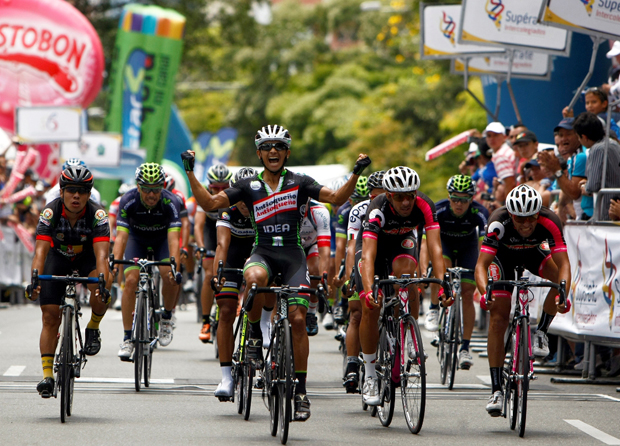 The final sprint in Medellin with Chinello and Pasqualon scoring placements. 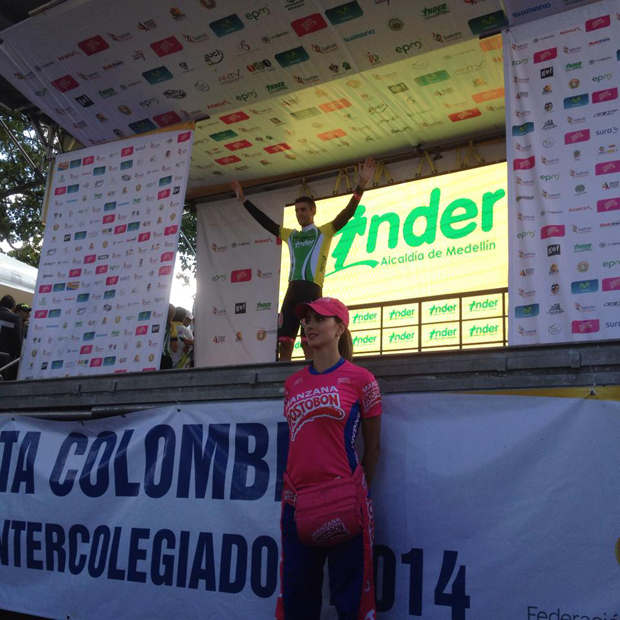 Paolo Ciavatta with the jersey for best foreigner.