VUELTA’18: The Riders Meet The Media!

The stars of La Vuelta met the media two days before the inaugural time trial in Málaga ahead of the teams’ presentation. Peter Sagan is recovering from his Tour de France injuries, Alejandro Valverde puts himself at the service of Nairo Quintana, the Yates are on top shape for the first time together as pros, Miguel Ángel López is again in contention for the best young rider prize… or more. 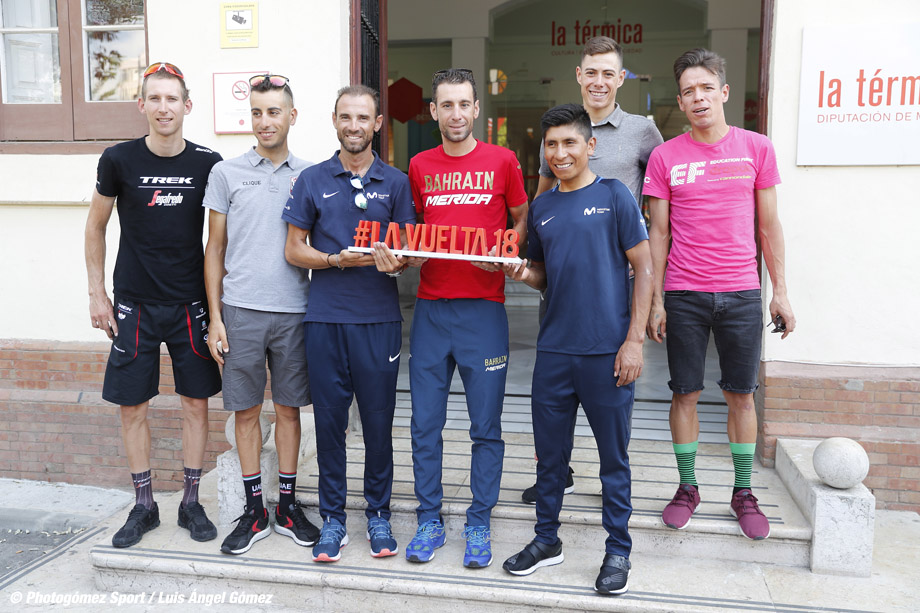 Peter Sagan: “It’s very important for me to be at La Vuelta”
Peter Sagan (Bora-Hansgrohe) is back at La Vuelta, en route to the World championships where he hopes to claim a historic fourth victory in a row at the end of September. “It’s very important to be at La Vuelta, the mountain stages will be very good training”, the Slovak star said on Thursday in front of the media gathered at Malaga. “And it’s much better than training home, alone.” Winner of his first Grand Tour stages at La Vuelta in 2011, Peter Sagan recalled it was only his “second year as a pro” when he first visited La Vuelta (and took 3 wins), “and I even won in Madrid. It was a very good La Vuelta for me. I’m always happy to be in Spain.” This year, he’s still feeling from his late crash in the Tour de France. em>“But I come here with my soigneur and my physiotherapist”, he explained. “I can do a lot of treatments, I think I’m going to feel better day by day and I hope to win.” 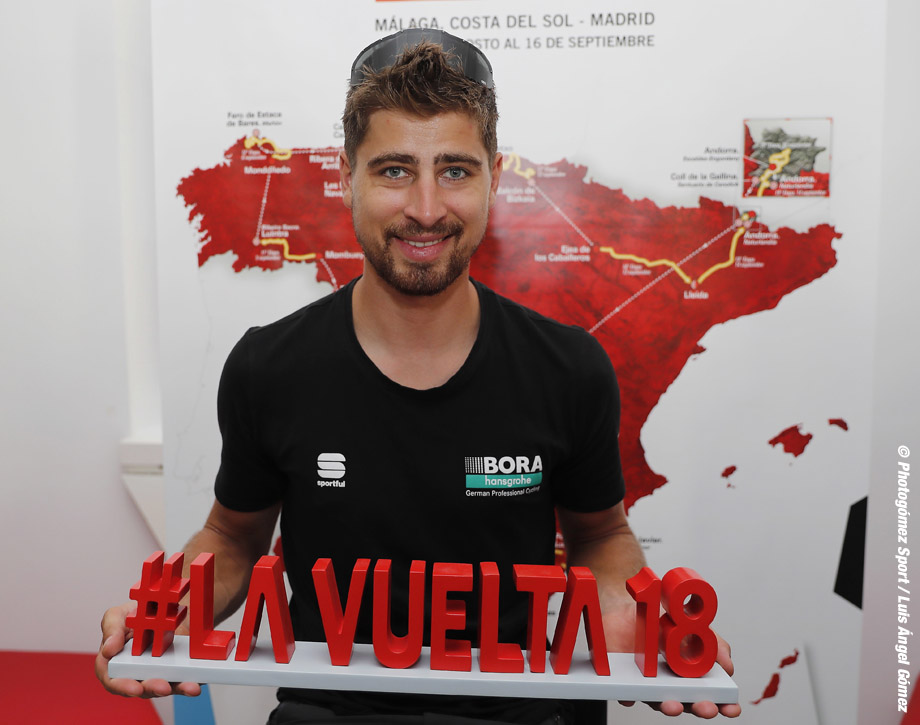 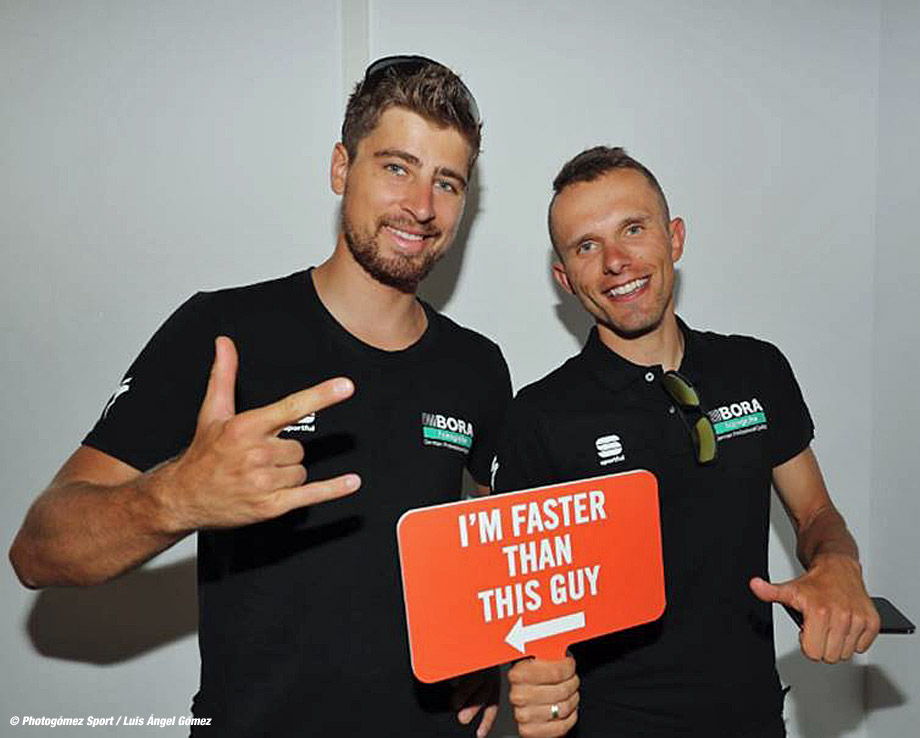 The Yates want to replicate their time as U23
Will La Vuelta 2018 be the first pro race with both Yates racing competitively together at the front since they turned pro? Simon has some answer. “The guys I know who have done the Giro but not the Tour were also racing in Poland, so I know where they’re at but there are others who have done the Tour and it’ll be interesting to see how they go”, the triple stage winner of the Giro d’Italia said in Málaga. “It depends how they finished the Tour. I see a south-north divide in this Vuelta. These first stages are gonna be quite warm, which I’m not a major fan of. I prefer to race in the north of Spain, and in Andorra where I live. Besides the heat, I think La Vuelta is a great race, a beautiful one with many climbs. I have good memories from my stage win in 2016. It was also the first time I managed a top ten in a Grand Tour. I’ve taken a lot of time off to recover from the Giro that I finished completely dead. I’ve had a very different build up to La Vuelta now. I don’t feel any difference in my approach of the racing after the Giro. Since the very beginning, I’ve always turned up to races trying to win. I was joking with my brother [Adam] during the Tour that he should come here instead. At the end it was announced that he would change [his race program]. I like to race with him. I hope this is the first race we can do together at a very high level. There has always been a curse. Whenever we raced together, one of us always was not so good unfortunately, or unlucky. The last race we did together where we were both really good was the 2013 Tour de l’Avenir, which is a long time ago. We hope to change the fortunes there.” 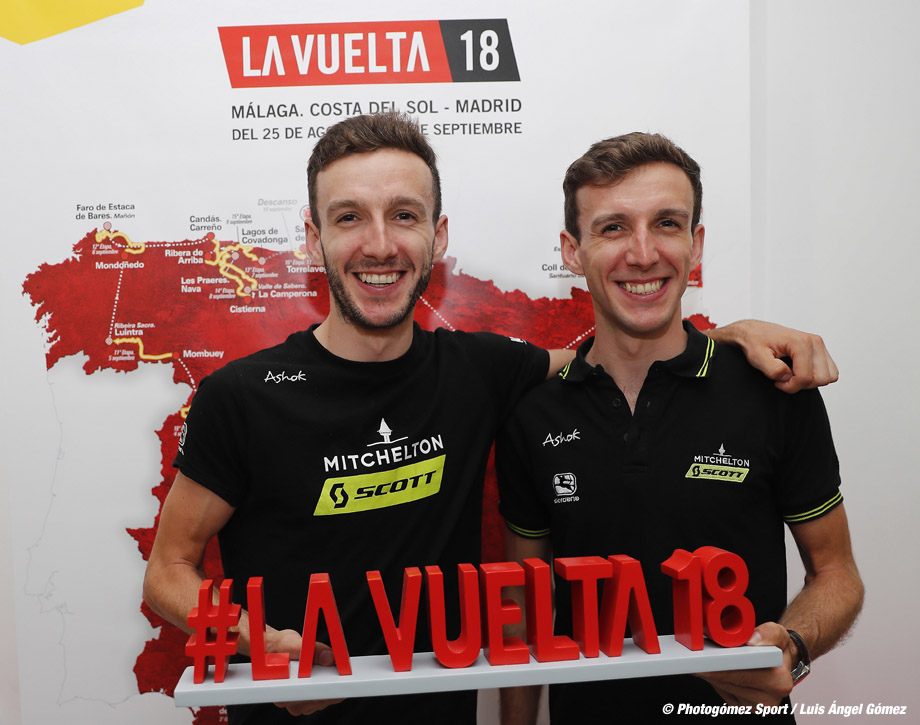 Superman López approaches La Vuelta “calm and motivated”
Miguel Ángel López (Astana) was one of the great revelations of last year’s edition of La Vuelta, where he won two mountain stages. At 24, the Colombian climber will be a wheel to follow, even more after an overall podium finish at the Giro d’Italia. “I haven’t done two Grand Tours in one year before, so we will see how my body will react. I approach La Vuelta with calm and serenity. We will have to go through the first week and hope the mountain stages will put everybody in his place”, he says. Talking about the parcours, López says it looks “similar to last year, with a lot of mountain finishes. It will be super hard, with mythical finishes. That brings me much motivation to start La Vuelta. I wouldn’t point one rival over the others, but I will have to control everybody because it’s the last Grand Tour of the year and everybody will go full gas”, says the Colombian, who thinks he is in a good moment of his career: “The body is maturing year after year. I’ve learnt a lot of things over the years and I have more consistency. I feel I don’t have any problems after more complicated years with crashes”, he closes with optimism. 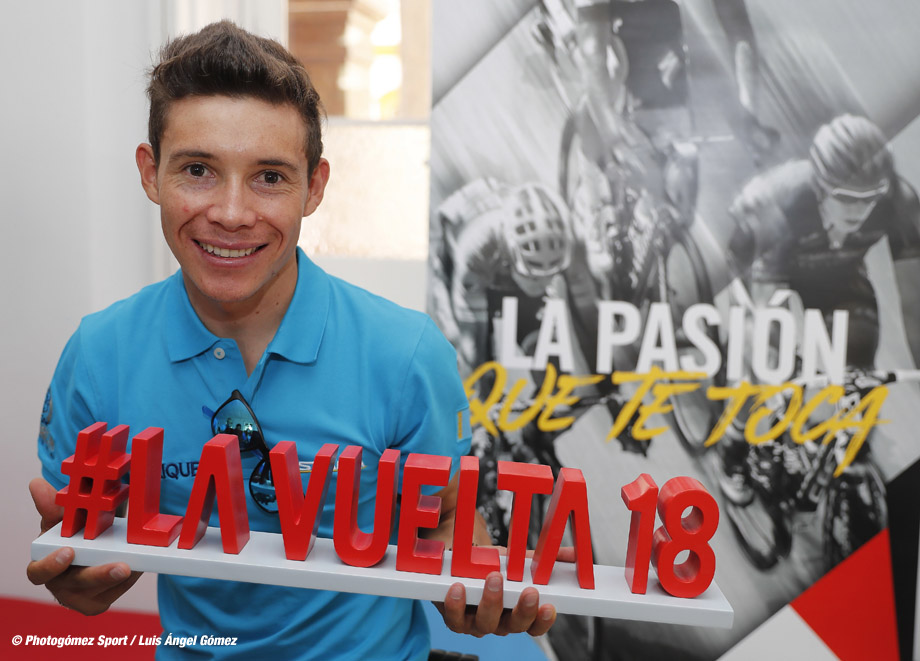 Valverde: “Nairo is the leader” – Quintana: “I’m up for this”
With Nairo Quintana and Alejandro Valverde, Movistar line up two former winners of La Vuelta. The Colombian will lead the Spanish squad as they aim for another overall success. “Nairo is the leader”, Valverde said ahead of his 12th participation in La Vuelta. “And I’ll do as I always do here: lend a hand and try to spice things up, do good and then feel good for the Worlds.” Winner in 2016, Quintana also spoke to the media: “Im up for the leadership, as I’ve been every time I’ve had to. I’ve recovered at home. I arrived at the Tour in a good situation but things didn’t go the way we hoped. My shape is similar to what it was at the beginning of the Tour, we hope we’ll be lucky and everything will go well until the finish.” And how does the Colombian see himself riding La Vuelta? “Full gas from the start until the finish”, he laughed. “Either we crumble, or we win.” 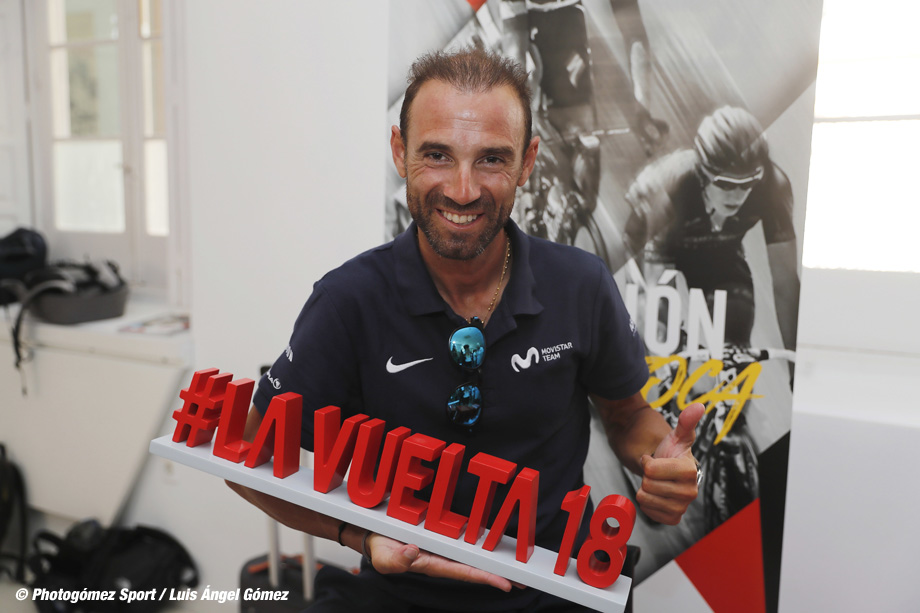 Teams presentation at the Málaga Roman Theatre
The 22 teams of La Vuelta have been introduced to the crowd in the magnificent roman theatre of Malaga, dated from the first century. Beforehand, the riders gathered in the museum of Malaga that was launched in December 2016 in a monument built at the end of the 18th century. 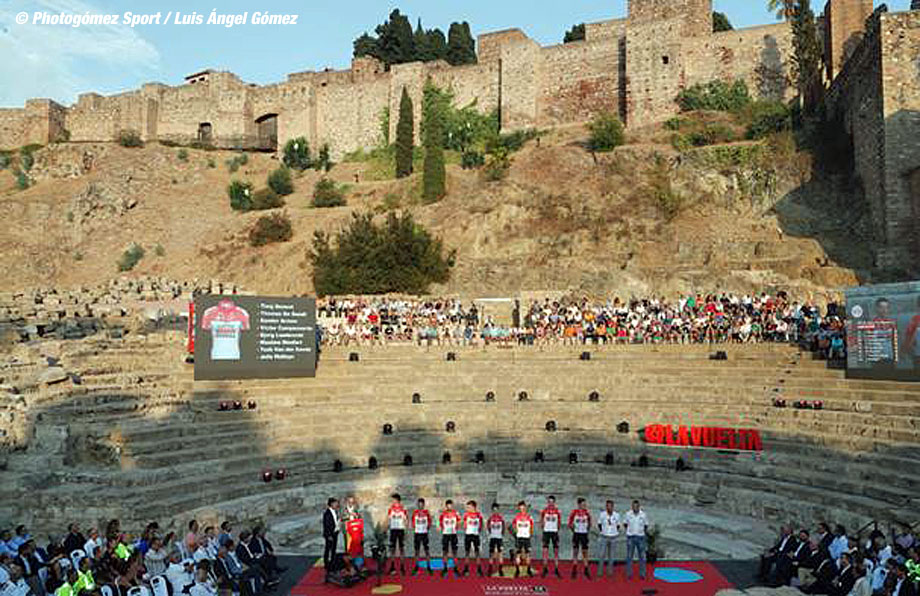 The public also cheered up La Vuelta’s artist, Nuria Fergó and the official song of La Vuelta: “La vida son solo dos días”. The local authorities have officially welcomed La Vuelta’s caravan, ready to start on Saturday the 25th with a first 8km prologue from the Centre Pompidou to Calle Larios, in the heart of the city center. 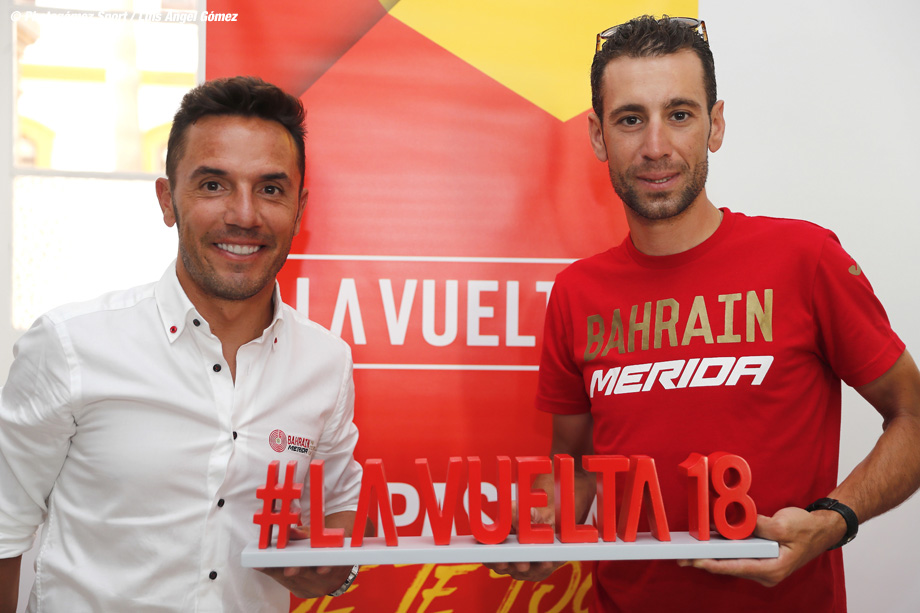 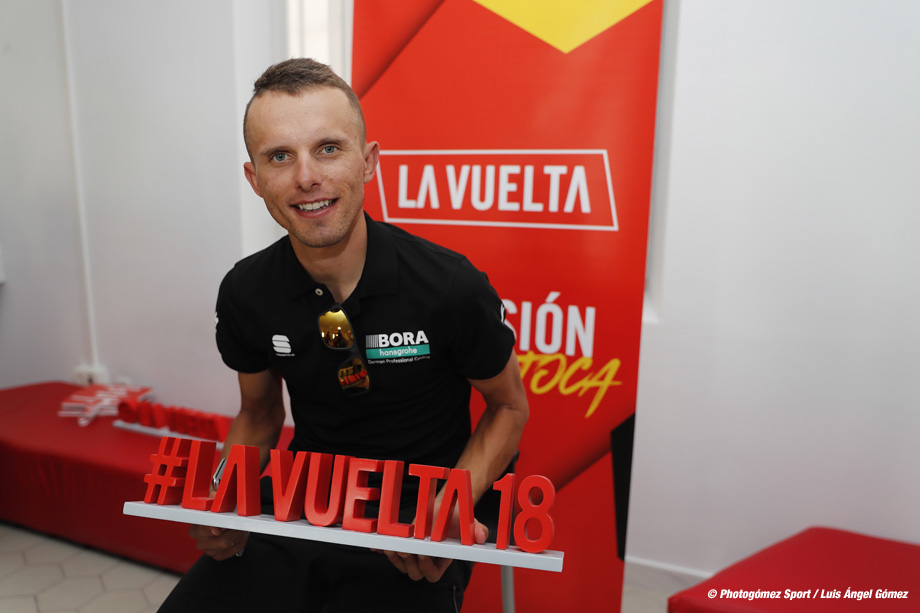 VUELTA’18: PEZ Looks At The Route!