Week-end of wins and podiums for RusVelo

Russian riders shine at home and in Italy

Last Sunday gave RusVelo much more reasons for celebration than the previous racing day when the team lost the leader’s jersey in the Tour of Kuban. While general classification stayed the same as the day before (all three podium places occupied by the riders of ITERA-Katusha) RusVelo took some form of revenge winning the 3rd and final stage with Roman Maikin and delegating Artur Ershov on the third step of the podium. Maikin also took over the purple points jersey from Ivan Savitskiy. Atrur Ershov finished as the highest-placed GC rider of the team in fourth.

At the same time in Italy Artem Nych came in 2nd in a popular U-23 one-day race of Trofeo Piva held for the 67th time in the mountains of the province of Treviso in Italy, 3” behind the Austrian Felix Grosschartner (Felbermayr Simplon Wels) (168 km in 4h20′) and 10” Davide Gabburo (General Store Bottoli).

Roman Maikin said:
“This time we were determined to correct the tactical mistakes that had cost us the yellow jersey the day before, the focus was on splitting the pack in the side wind, but the weather didn’t play in our hands. It was soon all too evident that the stage definitely comes down to a bunch sprint, so we did our best to make most of this chance, and it was a success after all. We have to give ITERA-Katusha their due, they defended their leader well and didn’t lose their concentration for a moment”.

“The team as a whole demonstrated good organization and commitment which I’m happy with. Yet, when everybody stands up against you as a clear favorite, you can’t afford any mistakes. We have to analyze what went wrong on Saturday and learn from this lesson, so I don’t see completely in the negative light.
We can only be happy with how fast the conditions of Igor Boev and Artur Ershov improve, keeping in mind that for the former it’s the first race since he broke his wrist in early February, and the latter is just back from a high-altitude training camp. The team came together over their assigned leader Ershov, and we see a progressively stronger coordinator in Andrey Solomennikov.

Roberto Vigni, the DS in the Italian race, said:

“It’s a well-known event, a serious test for U23 riders. A good part of them hold professional licenses, they are authorized to ride for their national squads, exactly what our guys did. Some 120 km into the race the peloton went to pieces on two grueling ascents, a couple of RusVelo riders made off with the leading group. Then, 7 km to go, Artem Nych teamed up with the Austrian for a decisive attack; Grosschartner was a stronger spriner, I think though, for Artem, two weeks without a race in his legs, it’s a good result. I would also give my thumbs up to Ildar Arslanov and Alexander Komin for excellent team work; Ildar took care of himself too, coming in respectable nineth”.

All in all, in the two races on Sunday RusVelo riders earned 53 UCI Europe Tour points. 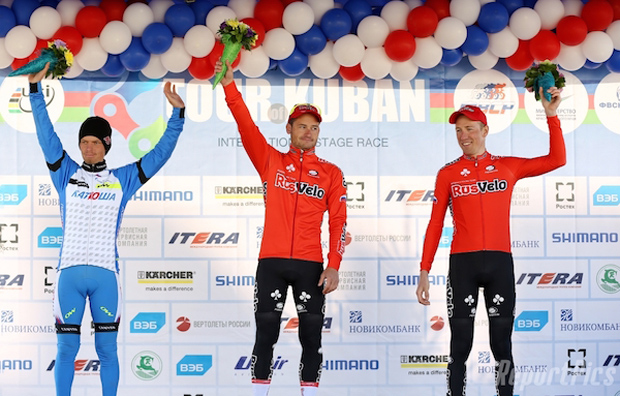 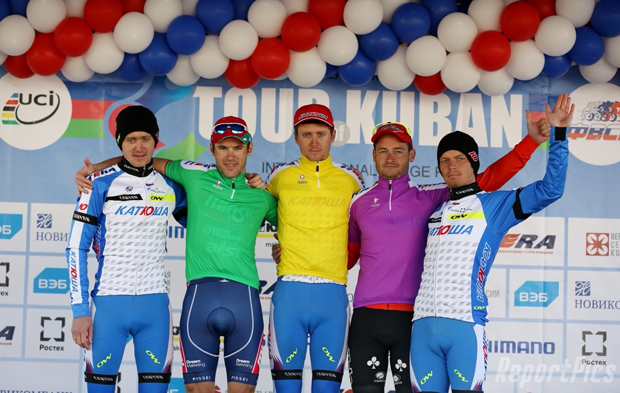 Nice fifth place for Elena Cecchini in Tour of Flanders