This year’s Winston-Salem Cycling Classic will feature more racing and more visibility for the event that features one of only two UCI women’s races in the United States.

“We heard a lot of feedback from participants last year who said these races were some of the toughest in America,” Race Director Ray Boden said. “They loved the intense competition of our races and the downtown courses. Our goal this time is to make everything bigger and better.”

Winston-Salem Competition Director Kurt Stockton, who raced professionally himself and has directed several men’s and women’s pro teams, said the goal in the event’s second year was to attract top talent and make the UCI 1.2 races a must-stop on the U.S. racing circuit.

“The Winston-Salem Cycling Classic has already confirmed the top tier of UCI-registered, U.S.-based men’s and women’s teams to compete against a quality foreign contingent, which no doubt will make for very dynamic and exciting racing,” Stockton said. “As one of only two UCI events for women in the U.S., we wanted to give the women a chance to compete at an international level – with home soil advantage – and an opportunity to earn coveted UCI points.”

Saturday’s pro criterium for women begins at 4:45 p.m. and at 6 p.m. for pro men, both on a 0.9-mile loop through downtown. A 50-mile and 80-mile gran fondo in the morning and a special USA Cycling criterium in the afternoon precede both pro races. Live music from three bands will provide additional entertainment, Boden said.

“The three biggest criterium bike races in America will take place three weekends in a row, beginning with Charlotte the week before and wrapping up in Athens a week after our races,” Boden said. “Within a couple years, I am confident that the Winston-Salem Cycling Classic will emerge as one of the premier cycling events in America.”

More information on all events can be found on the official website, www.winstonsalemcycling.com. There is also an event page on Facebook: www.facebook.com/WSCycling. On Twitter, the Winston-Salem Cycling Classic will tweet under the handle @WSCycling and use the hashtag “#WinstonCycling” for all events. 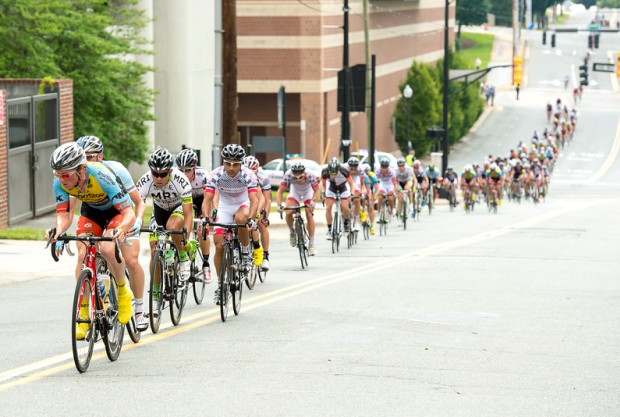 Eventual winner Daniel Patton leads the peloton through the streets of Winston-Salem during the 2013 edition of the Winston-Salem Cycling Classic. (Jon Safka photo.)