Wouter Wippert’s stellar season for Drapac Professional Cycling has continued with the Dutchman winning the bunch sprint for Stage 4 of the Tour of China II.

It’s the 24-year-old’s eighth victory of the year and the first since his return from pneumonia which had left him hospitalised. Prior to the Tour of China I, Wippert had not raced with the team since the Tour de Kumano where he won two stages and the points classification.

“A few weeks ago I was just happy to be riding my bike again, so I came to China with some expectations but overall it’s been about getting myself back into racing,” he explained.

“This win today means a lot.”

Drapac’s Directeur Sportif Henk Vogels praised the efforts of the squad to negotiate the finishing city circuit in the wet conditions.

“It was the perfect lead-out from the boys,” he said.

“Will Clarke, Malcolm Rudolph and Jonny Cantwell combined for a great lead out to drop Wouter off with 250 metres to go. He won easily.”

Wippert said that with around 60km remaining, despite the cold and wet conditions, and in one of many breakaways that punctuated the stage riding with teammate Clarke, good sensations had him feeling optimistic for the finale.

“They haven’t missed anything all week,” said Vogels. “They’ve been in all the breakaways and Will Clarke’s been at his attacking best; Mal Rudolph has also gone with the moves.”

The Tour of China II concludes on Sunday following tomorrow’s transfer day. While a charge at the overall lead of Milan Kadelc (Team Dukla Praha) is “nearly impossible” according to Wippert, who today moved to 22seconds off the yellow jersey, he will attempt to add to his win tally.

“My focus is on the stage win again and hopefully that results in a top three overall,” he explained. “We worked as a team today and we helped each other the whole stage. That makes the difference between winning and losing so I hope we can continue this way for what’s left of the season.” 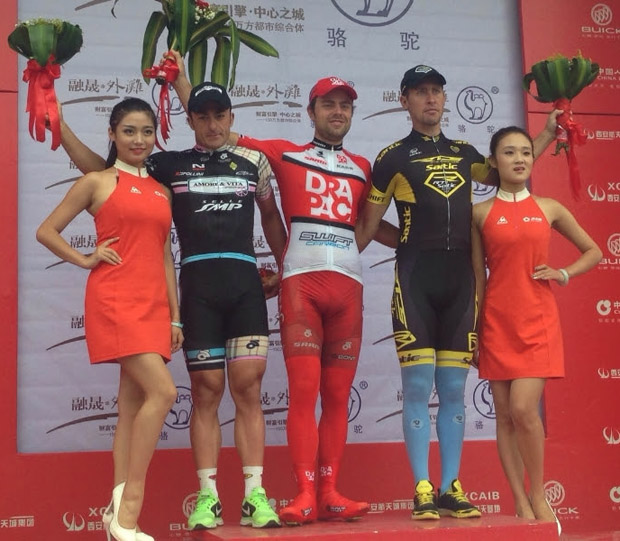