AEG announced rosters for the Amgen Breakaway from Heart Disease™ Women’s Race Empowered with SRAM, which was selected as the first of only two U.S. events on the first-ever UCI Women’s WorldTour. One of the largest platforms in the world for women’s cycling, the race roster includes six of the top-10 UCI ranked cyclists, including top-ranked Emma Johansson (Wiggle High5), who also took home the 2008 Olympic road race silver medal.

Also racing will be 11 World Champions, including two-timer Kristin Armstrong of Twenty16 – Ridebiker, the accomplished U.S. rider who also earned two Olympic gold medals in the time trail (2008 and 2012). Two other Olympians in the lineup include UnitedHeathcare Pro Cycling Team’s Lauren Tamayo (USA), who won silver in the 2012 team pursuit, and Rabo-Liv Women Cycling Team’s Marianne Vos (NED), who took gold in the 2012 road race and the 2008 points race.

The women’s event will run in concert with the final four days for the Amgen Tour of California men’s race, with both concluding in Sacramento Sun., May 22.

Featuring 18 teams of six cyclists, the women will face off over a 197.8-mile course during the four-stage event taking place in South Lake Tahoe, Folsom (team time trial), Santa Rosa and Sacramento. Favorites in popular categories include:

“We’re so proud to offer the best women in cycling a platform to showcase their talent to an international audience that continues to expand each year,” said Kristin Klein, president of the race and executive vice president of AEG Sports. “These athletes are some of the fastest on the planet, and they are going to wow fans across California – and the world – again this year as we kick off another women’s race…our biggest ever. We are also thankful that our title sponsor Amgen, who has supported both the men’s and women’s races since year one is leveraging the women’s race to raise awareness for their new cardiovascular initiative this year.”

NBC Sports Group will air highlights of the women’s race throughout its daily coverage of the 2016 Amgen Tour of California and will present a comprehensive highlight show featuring robust coverage of the women’s race on Thurs., May 26 at 10:30 p.m. PDT/ Friday, May 27 at 1:30 a.m. EDT on NBCSN. Race fans also can keep tabs on the action with the Microsoft Tour Tracker App for desktop and mobile as well as Voxwomen, the online women’s cycling channel, which will provide the best of the race and behind-the-scenes action to give fans and followers insight into the women’s professional peloton. Video coverage will be available at www.voxwomen.com and www.amgentourofcalifornia.com for the duration of the race, as well as live updates throughout the week on Voxwomen social media channels.

Fans can also connect with the race through all of their favorite social media platforms. Links are available at the Social drop-down menu at www.amgentourofcalifornia.com and fans can use #AMERICASGREATESTRACE to join the conversation.

For further information about the race and to experience it like never before with VIP Access, please visit www.amgentourofcalifornia.com. 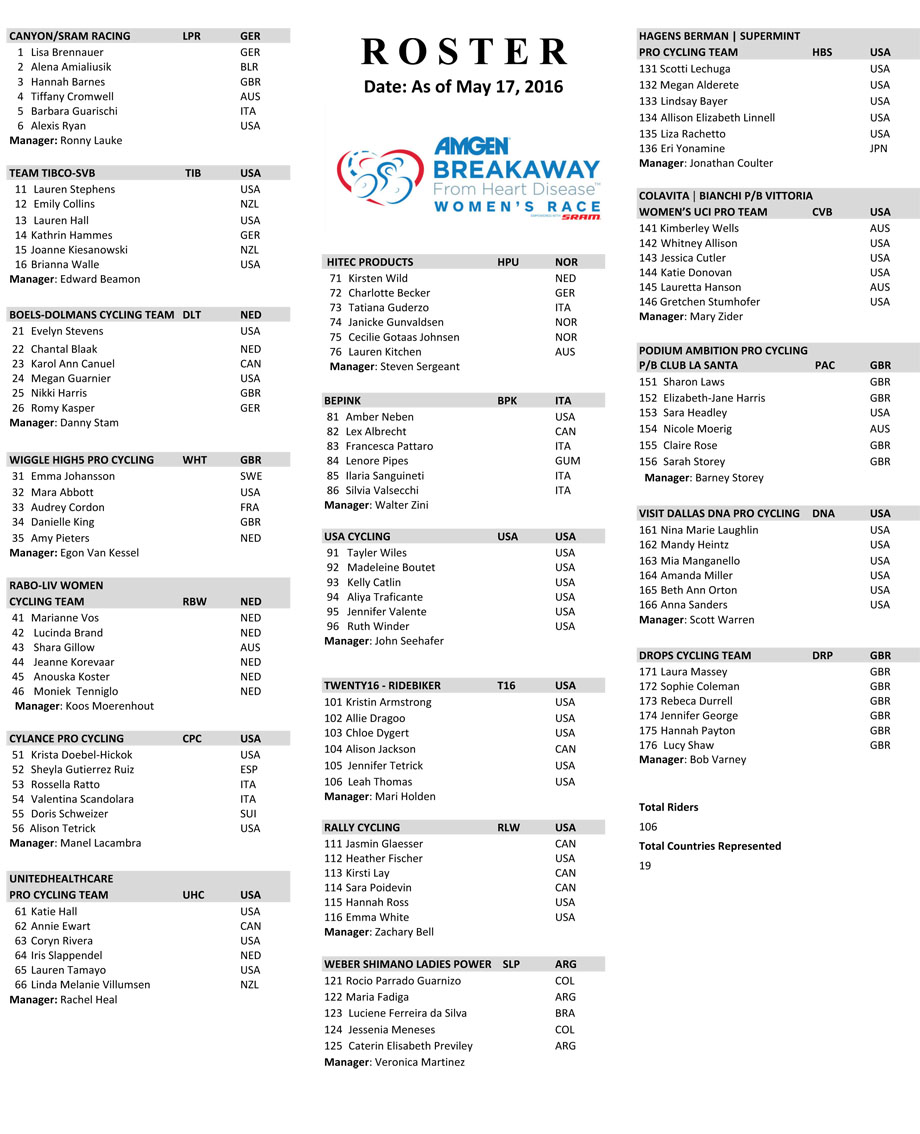