Worldwide stars at Giro del Trentino, Wiggins surprisingly back on the scene

Sir Bradley Wiggins replacing Aussie Richie Porte as Team Sky’s leader stands out as the biggest suprise in the latest release of the entry list. In fact, due to his teammate bad phisical conditions in the recent weeks, 2012 Tour de France winner will get another chance back on Trentimo roads after last year’s unlucky outcome.

Hence, another yellow jersey adds to an outstanding collection of stars who announced their presence at the Giro del Trentino: for the second year in a row, Australian Cadel Evans (BMC) will land in Trentino to prepare a new assault to the “maglia rosa”, while his teammate Daniel Oss, Netapp’s Cesare Benedetti, Patrick Facchini (Androni-Venezuela) and Moreno Moser (Cannondale) will be the home favorites on their own land.

In addition to Moser, Ivan Basso and Damiano Caruso are set to lead Cannondale’ squad, while 2013 Vuelta a Espana winner Chris Horner (Lampre-Merida) and Michele Scarponi (Astana) round out the list of Grand Tour winners.

Basso and Scarponi are expected to be at the sharp end when the race comes to its core, but a bunch of valuable opponents will to provide a major upset on the world stage: youngsters Fabio Aru (Astana) and Francesco Manuel Bongiorno (Bardiani-CSF), as well as experienced Domenico Pozzovivo (Ag2r-La Mondiale) – the overall winner in Trentino back in 2012 – Dario Cataldo (Team Sky) and Franco Pellizotti (Androni-Venezuela).

Giro del Trentino’s uphill finishes (San Giacomo di Brentonico, Roncone and Monte Bondone) lured Spanish Movistar Team to make their absolute debut in the Italian stage race. The team leader for Giro d’Italia, Colombian Nairo Quintana, has yet to make a final decision on the race, while former Zoncolan winner Igor Anton, Polish Sylvester Szmyd (3rd placed in the GC 2 years ago) and Nairo’s brother, Dayer Quintana, are all set to line-up for the opening TTT.

A strong and numerous bunch of Colombians will show up in Trentino either way, including Cayetano Sarmiento (Cannondale), Winner Anacona (Lampre-Merida), Sebastian Henao (Team Sky) and the Escarabajos of Team Colombia, who enjoyed the maiden win of their history on Passo Pordoi at Giro del Trentino two seasons ago. 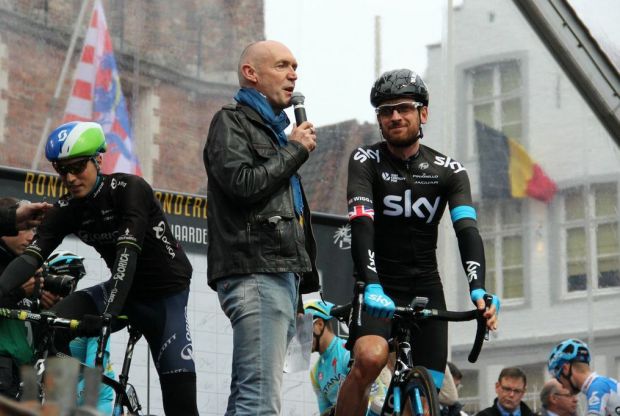 Photo: Sir Bradley Wiggins will get another chance back on Trentino roads after last year’s unlucky outcome (Photo Credits: Vitesse).