By Press Release On Mar 14, 2015
Share
Like PEZ? Why not subscribe to our weekly newsletter to receive updates and reminders on what's cool in road cycling?

The Tour de Langkawi reached its peak today with the tackling hill top finish at Fraser’s Hill. The climb was a late addition to the race course, after the removal of Genting Highlands. Nonetheless, its final steep 8 kilometers proved to be the perfect playground for MTN-Qhubeka p/b Samsung.

After a few kilometers into today’s racing a four-man breakaway with Francesco Chicchi (Androni Giocattoli) and Liam Bertazzo (Southeast) went clear from the peloton and was able to built up lead of nearly 8 minutes.

Back in the peloton it were Skydive Dubai and Tinkoff-Saxo who controlled the pace. Both teams were later joined by Sky. The increased tempo saw the gap to the leaders come down quickly, and it was Bertazzo who decided to jump his breakaway companions with around 40 kilometers to go.

The lone Italian was reeled back in at the foot of the final climb, when Team MTN-Qhubeka p/b Samsung’s riders began their approach for the stage win. Overnight Daniel Teklehaimanot had come down with a chest infection complicated by high fevers. He was not able to take any further part in the race, which meant that the team had to adjust its tactics. The riders kept low profile until the last kilometer and followed the wheels of Sky.

This tactic turned out to be the right one, and earned Youcef Reguigui the biggest success of his career so far. Our Algerian fast man beat Sergio Henao (Sky) and Valerio Agnoli (Astana) into second and third. Jacques Janse van Rensburg followed in seventh.

After winning today’s queen stage Youcef will go into the final stage of the Tour de Langkawi with a 10 second lead in the GC. Tomorrow the race will end in Kuala Lumpur.

Youcef Reguigui – Rider
The climb was incredibly hard for me to hold on but I managed to stay in the front group. Then 2 kilometers to go Jacques said to me, “you can win this!” I felt a bit stronger and managed to hold on a bit longer. When I saw the 500 meter banner I knew I could win. I started my sprint at 300 and I’m so happy to be able to win the stage for my team who have ridden so well this week. I hope this win will also motivates the people that believe in #BicyclesChangeLives. 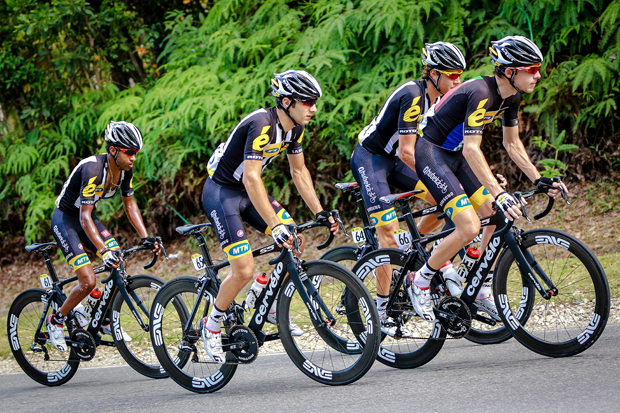