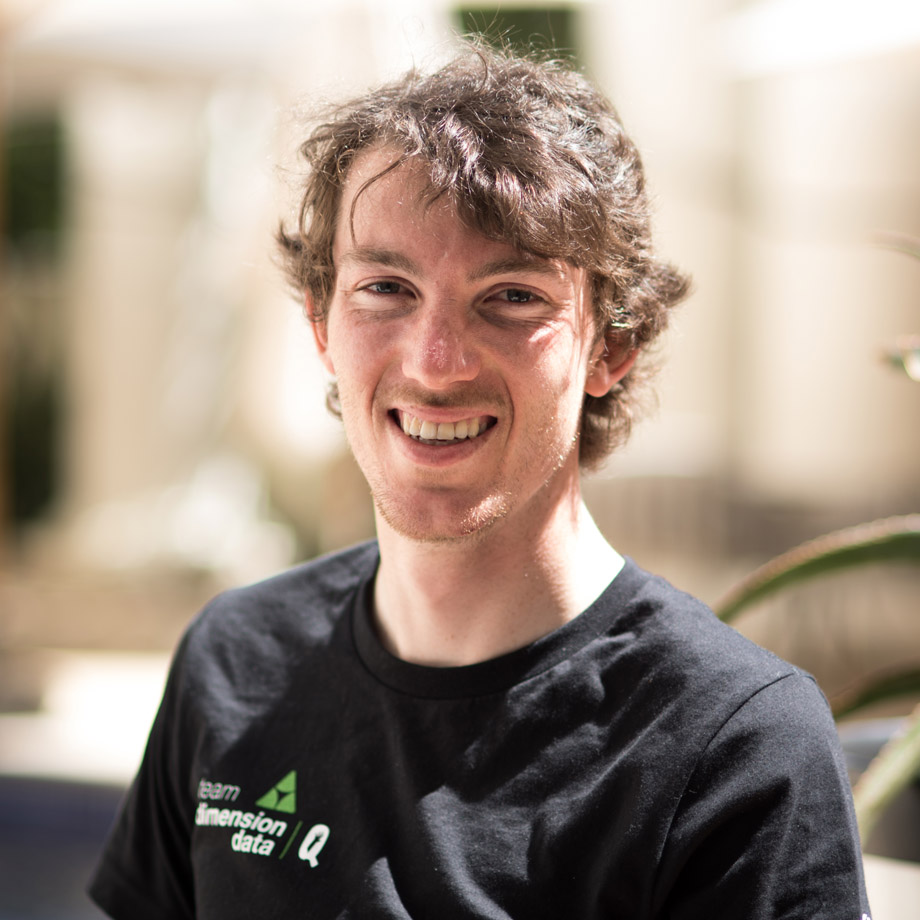 Jones signed-up for the Men’s Zwift Academy alongside 9,200 other cyclists from around the world, which consisted of a six-week program of workouts, group rides and races exclusively in the online cycling environment of Zwift. From there Jones was among the top ten U23 candidates selected for the two-week long semi-finals and another round of workouts, this time both on Zwift and outdoors. Jones then progressed to the Zwift Academy final along with Sam Mobberley (New Zealand) and Nick White (Australia), held at the Team Dimension Data end of season team camp in Cape Town, South Africa. After a week riding with the team and further challenges out on the roads, Jones was a warded a place on Team Dimension Data’s U23 squad for 2018.

“To say this is a dream come true is the understatement of the year,” says Ollie Jones. “It’s a life changing experience and I still can’t believe it’s happening. Nick and Sam were incredible competitors in the Academy Final and, after this camp, good friends. Now I’m onto the next challenge of making the move to a now home in Lucca, Italy and doing everything I can to support my team mates in the season ahead.”

Zwift Academy athletes were evaluated through their performance online over two months. A panel of judges from Team Dimension Data and TrainSharp coaching analyzed their data in each round, subjecting semi-finalists and finalists to ever-increasing levels of scrutiny, prior to their real-life assessments in Cape Town.

“Finding the next young talent is never easy, but Zwift’s reach and data collection opens our team up to the whole world.” says Doug Ryder, Team Dimension Data’s Team Principal. “Of course, there’s no substitute for the tactics, bike handling, and skills a rider needs in real-world racing, but these finalists presented us with the raw materials we need to find the next generation of world class talent. This isn’t a marketing gimmick; many of our riders are passionate about riding Zwift and they’ve seen first hand what a capable rider Ollie is. We’re super proud to have him on the team.”

The Zwift Academy, created to shake up talent ID in cycling, has delivered another winner from a non-cycling background. Jones, a former speed skating prodigy who competed at 5 championships, converted to cycling in May 2016 due to skating injuries. He now joins Leah Thorvilson, ex Elite runner and 2016 Women’s Zwift Academy winner in cycling’s pro ranks.

Zwift CEO & Founder, Eric Min adds, “Last year’s Zwift Academy proved that the talent is out there and they’re using Zwift. While we had no doubt in the strength of our community of Zwifters, we’re lucky to have a partner like Team Dimension Data share that confidence. Heartfelt congratulations not only to Ollie, Nick, and Sam but also to the thousands who got more fitter and stronger by graduating from the Zwift Academy program.”

Alongside Jones’s win, Team Dimension Data opened up their Cape Town training camp to all Zwifters with 19 group rides and group workouts in support of Qhubeka, their bike charity partner. Group rides were led by Team Dimension Data riders like Mark Cavendish, Edvald Boasson Hagen and Steve Cummings with the goal of funding 500 Qhubeka Bikes to be distributed throughout South Africa in order to bring people in rural communities closer to healthcare, jobs, and education.