PeloPic: At the teams’ presentation in Schiltach (Ger), besides the roster for 2018, also the new race kit was presented. Find below quotes from some of the riders, Ralph Denk (Team Manager), Willi Bruckbauer (BORA), Philippe Harinck (Hansgrohe) and Giuseppe Bovo (Sportful). 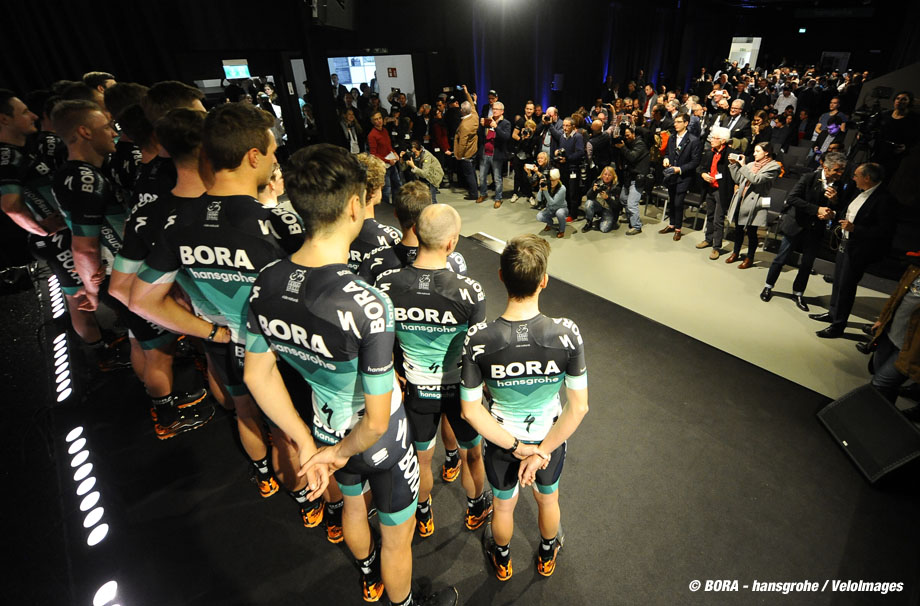 “It was a tough season with lots of ups and downs. The crash in Flanders, the punctures in Roubaix, then the Tour – a lot of times we had to fight back. But taking over 30 wins in our first WorldTour season, and being one of just three teams that could win at least one stage in every Grand Tour, makes me proud. I think we achieved a lot.

Now it’s more about the details. Last year was a big step up for us and it’s almost impossible to make everything right from the beginning. During the winter, we will work on a lot of performance projects, aerodynamics, training, nutrition. I feel we can do better than we did this season and everybody in the team is focused on improvements. Therefore, our goals for 2018 are quite ambitious: We want to win one of the Monuments, take a top five result in one of the Grand Tours, take the green jersey in the Tour and secure a top five spot in the WorldTour team ranking at the end of the season.” – Ralph Denk, Team Manager.

“My decision to change team was not only based on the aspect to get more freedom. After spending several years at Team Sky, I felt it was time to change scenery, work with new people, finding new inspiration. But for sure it is also great being able to target races like the Dauphiné, were I am normally in good shape. Besides that, Paris-Nice, or the Ardeenes are races I want to perform well in.” – Peter Kennaugh. 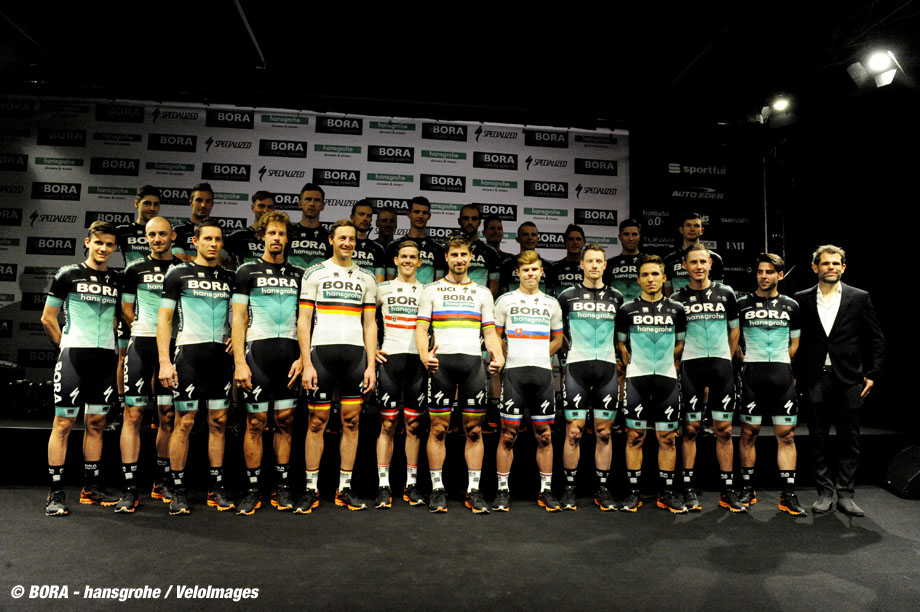 “One of our main objectives is building brand awareness, it is now 11 times higher than it was when we started the main sponsorship 3 years ago. In order to increase the visibility of our brand we have modified the BORA logo on the jersey. We skip the steam symbol, but the core, our identity remains: We are BORA. And in TV spots that are presented around the races we explain who we are and what we do: Extracting vapour without a cooker hood – a revolution in the kitchen.” – Willi Bruckbauer, owner BORA. 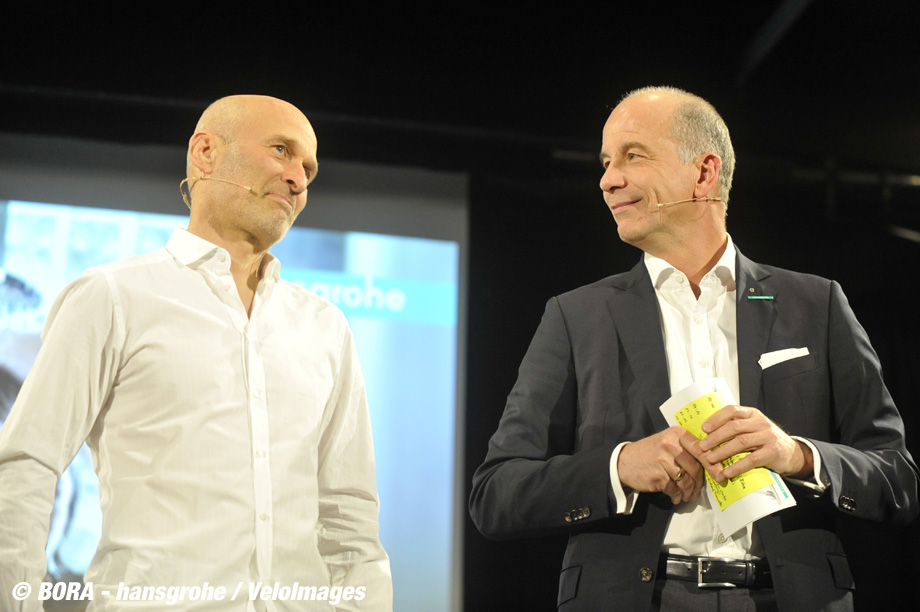 “Our sponsorship of the cycling team is based on a rational decision and fits in seamlessly with our global marketing strategy for hansgrohe. Already in the first season, awareness of our premium brand hansgrohe rose sharply. Our sponsorship engagement is already paying off, especially in important markets such as Germany and France, as well as in Belgium where professional cycling enjoys great popularity.” – Philippe Harinck, Sponsoring Projektleiter der Hansgrohe Group. 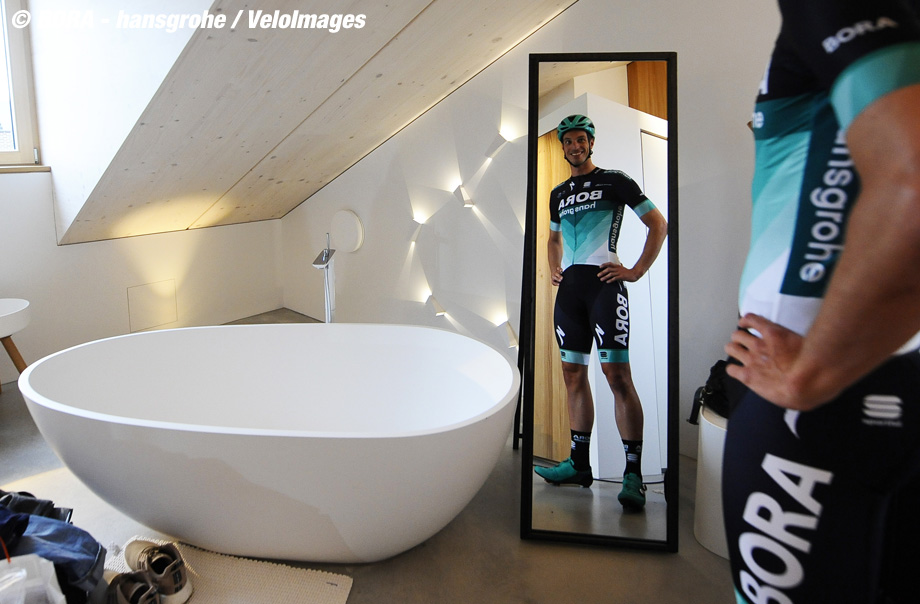 Peter Sagan, the triple UCI World Champion, was in good mood, talking first about his new role as a father: “Becoming a father is a natural and important part of a man’s life and there is no doubt that the birth of Marlon was one of the happiest moments in my life. Both, Kate and him are doing great and I’m sure I will cherish every moment I spend with them.” Then being asked if he wants to ask a question to somebody on the stage instead of being the one to answer like always, Sagan asked Denk that he heard rumors about the fact that the team manager lost a bet and had to do a tattoo. Of course, he knew already that Ralph Denk had to tattoo the Peter Sagan logo on his left ankle, after Sagan took his third world title in a row. 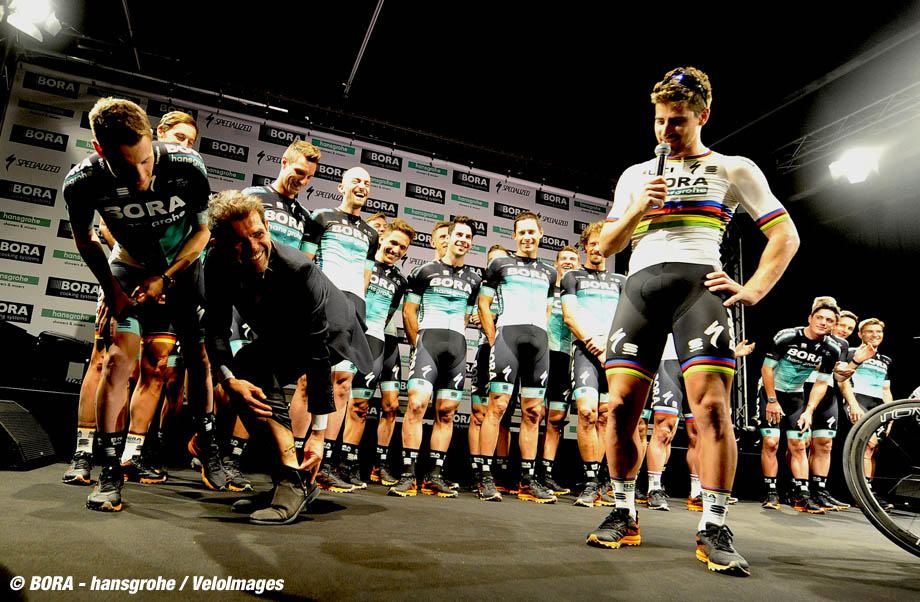 “I had a season every athlete is afraid of. But what can you do, that’s sport. I never stopped fighting, or believing that I will come back to my best level, and in the end of the year it already started to pay off. I was back racing in Turkey and China and had no problems at all. We changed a lot of my training off the bike and I think everything is fine now. For next season, I am quite optimistic that I can fight again with the best GC riders.” – Leopold König. 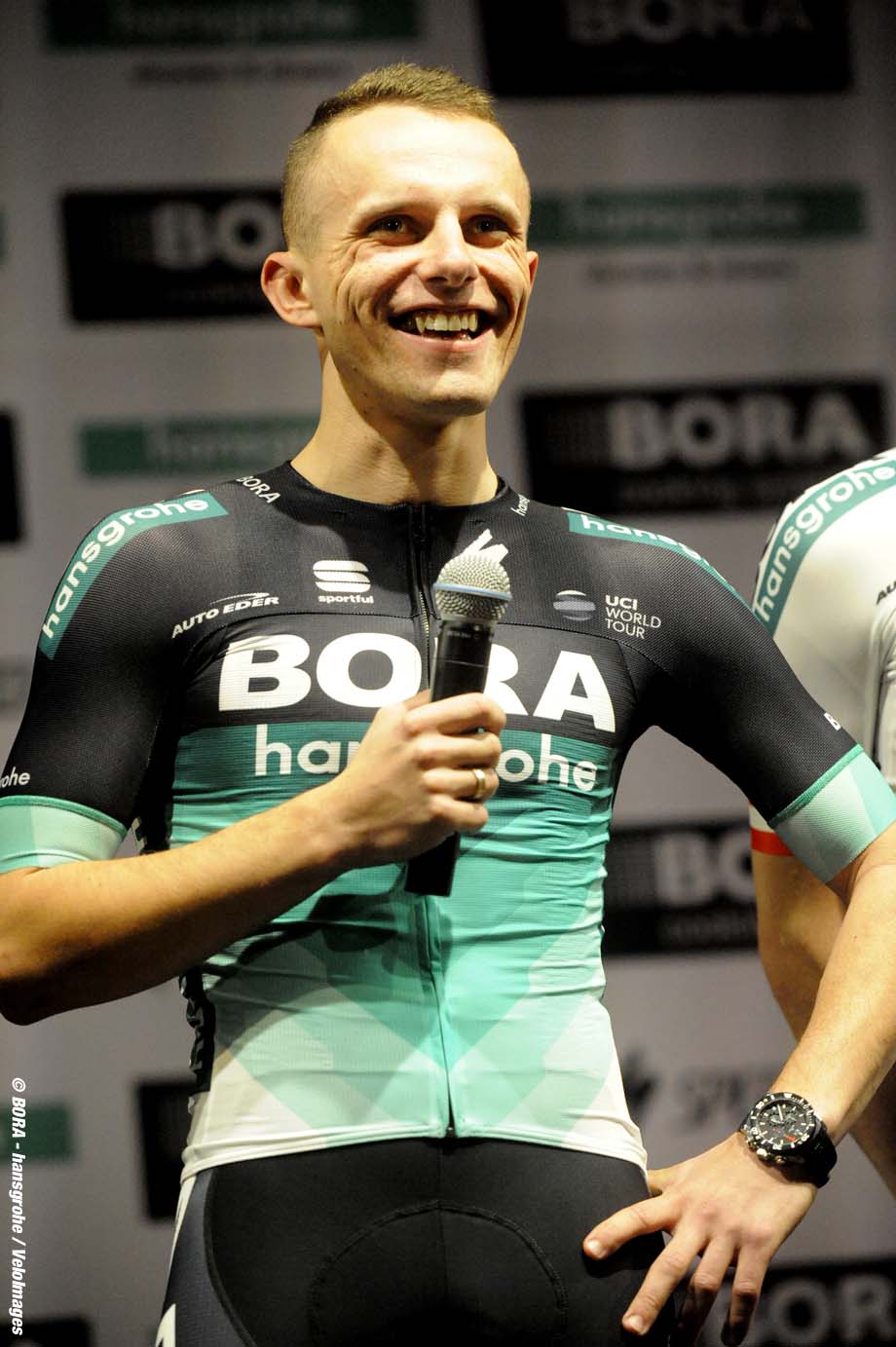 “It was the first time I tried to go for the GC in the Tour de France this year. Obviously, it didn’t work out as planned for us. The Tour showed why it’s the hardest race in the world to be won. But I want to try again next season, I never surrendered in my career, cycling is always about getting up on your feet again. So I want to prepare as good as possible for the Tour again and then we’ll see. About Innsbruck, we have to see how the season goes. My main focus is the Tour de France as I said. But the profile of the course there should suit me, and I already showed in Rio, that I can do also well in one day races, so why not giving it a go.” – Rafal Majka. 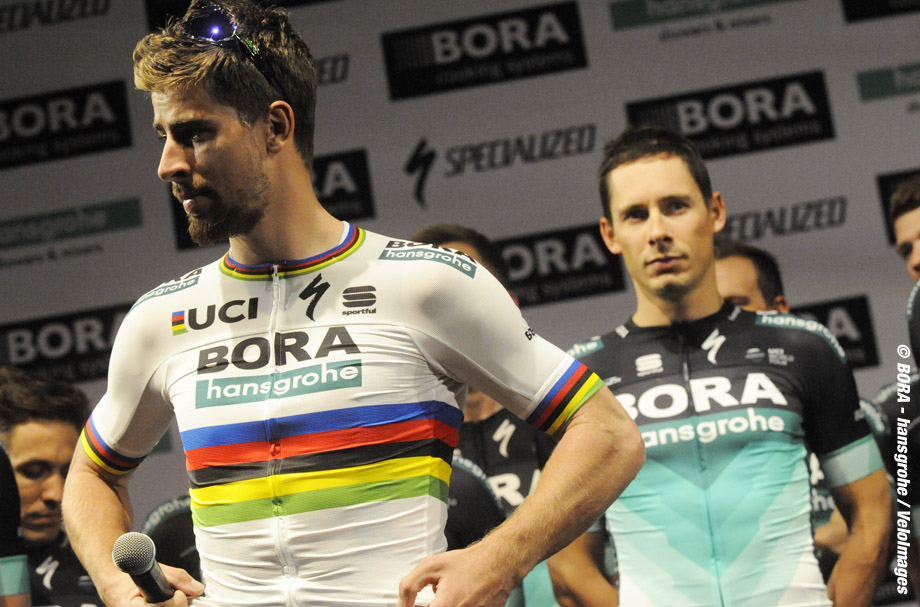 “We are proud to be a sponsor of Bora-Hansgrohe, which means being a sponsor of a team at the very highest level, with the strongest rider in the world. For Sportful, it’s gratifying to see professionals come back and choose us again because of the quality and the attention that we devote to every garment. It’s a responsibility that we intend to honor to the best of our ability,” – Giuseppe Bovo, brand manager Sportful.