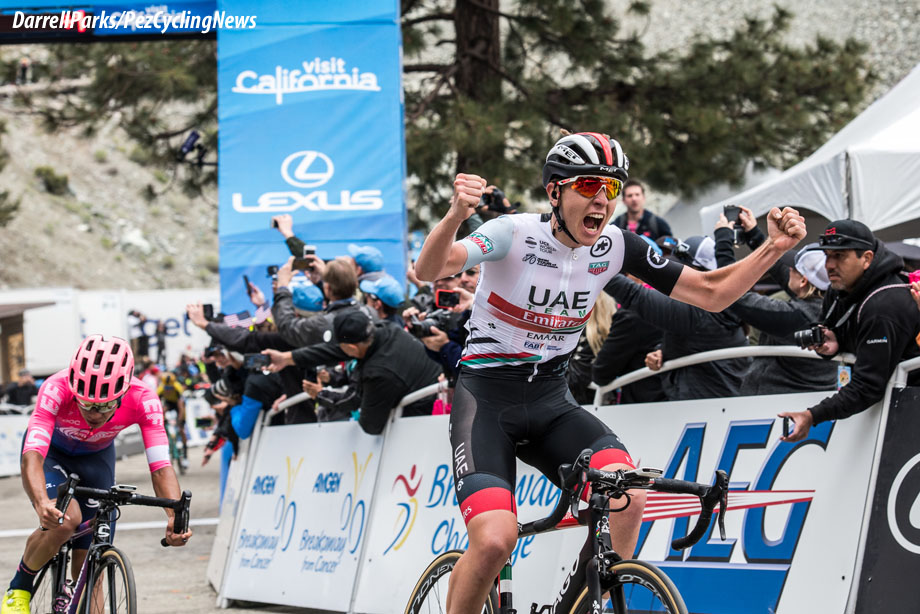 A determined ride by UAE Team Emirates’ 20-year-old Tadej Pogacar’s (SLO) today could make him the youngest ever Amgen Tour of California champion when the race concludes in Pasadena tomorrow. First-timers to this race, Pogacar and 21-year-old Sergio Higuita battled to the steep summit finish atop Southern California’s Mt. Baldy, with the EF Education First Pro Cycling Columbian rider slipping into second place for the stage after a wide turn to the finish gave the younger rider clearance to the line.

“It was for sure a team effort. Once again, my team did a really good job protecting me all day and leading me out to the final climb and supporting me all the ways that they could. I just did my best the last 5 or 6km, and I was climbing really well today,” said Pogacar. 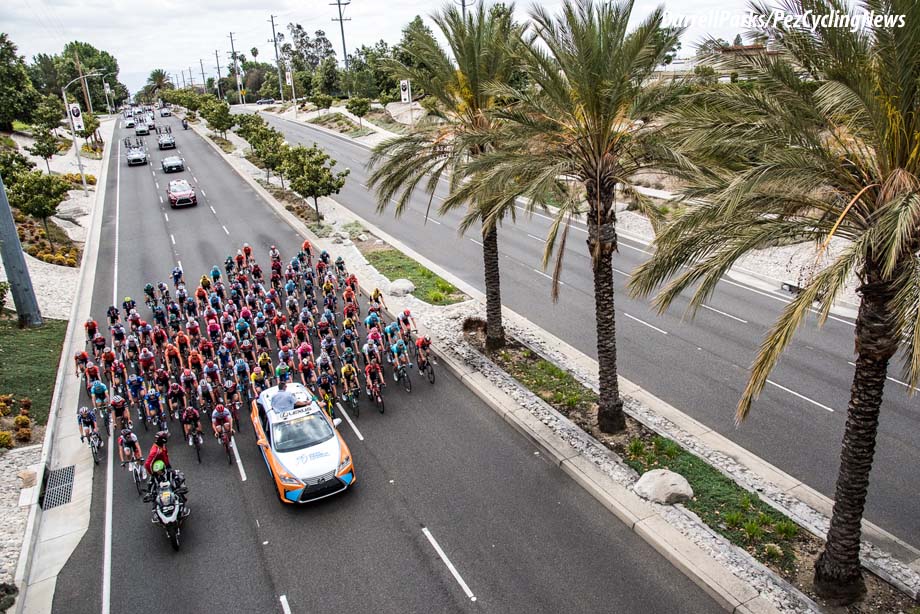 The penultimate race day began with just 36 seconds separating the top-10 riders on the overall race leader board, which shattered on the steep ascent up Mt. Baldy.

Pogacar, who began the day in fourth place 16 seconds off the race lead and in the TAG Heuer Best Young Rider jersey he has worn for four consecutive days, now holds the overall race lead +:16” ahead of Higuita. Deceuninck – Quick-Step’s Kasper Asgreen (DEN) and Team Jumbo-Visma’s 2017 race champion George Bennett (NZL) kept the lead group within their sights up the final mountainous stretch to keep their overall contention hopes alive, ending the day in third (+:20”) and fourth (+:29”) overall respectively. Tejay van Garderen (Tacoma, Wash.) of EF Education First Pro Cycling, who has held the overall race lead since day two, lost time on the final uphill section, falling to ninth place in the overall (+1:22”). 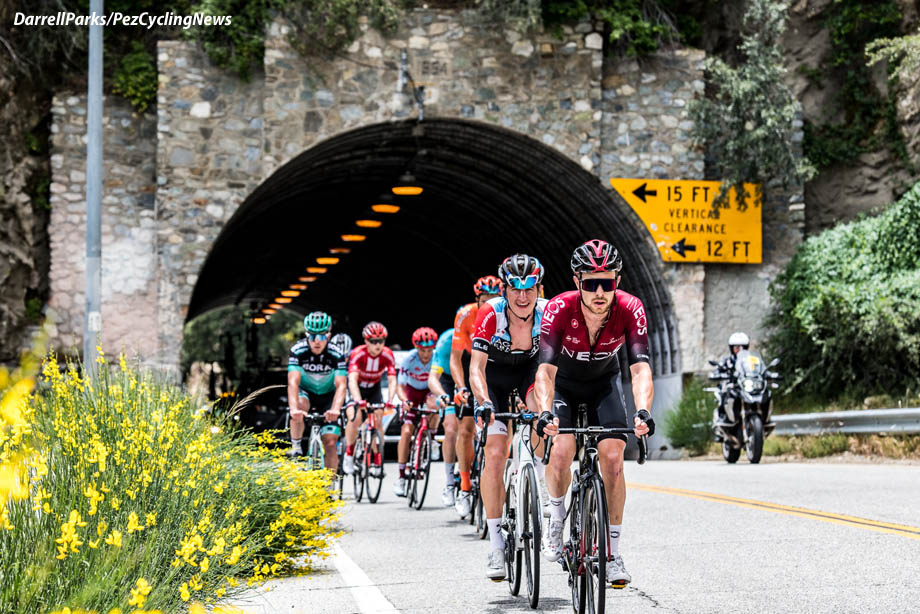 The Queen Stage from Ontario to Mt. Baldy, presented by Visit California, was the shortest but toughest of the week with 12,000 feet of climbing – more than half of that in the last 27 miles. Through the village of Mt. Baldy itself, through Icehouse Canyon, and up the ten switchbacks, the brutal ascent averages 9.4% with a max incline of almost 16%. In fact, the last half mile alone averages 12.8%.

Two thirds of the way into the stage, today’s breakaway held a three-minute advantage before things turned upward near the Glendora Sprint, and contained Hagens Berman Axeon Cycling Team’s Mikkel Bjerg (DEN), who was awarded today’s Breakaway from Cancer® Most Courageous Rider Jersey. 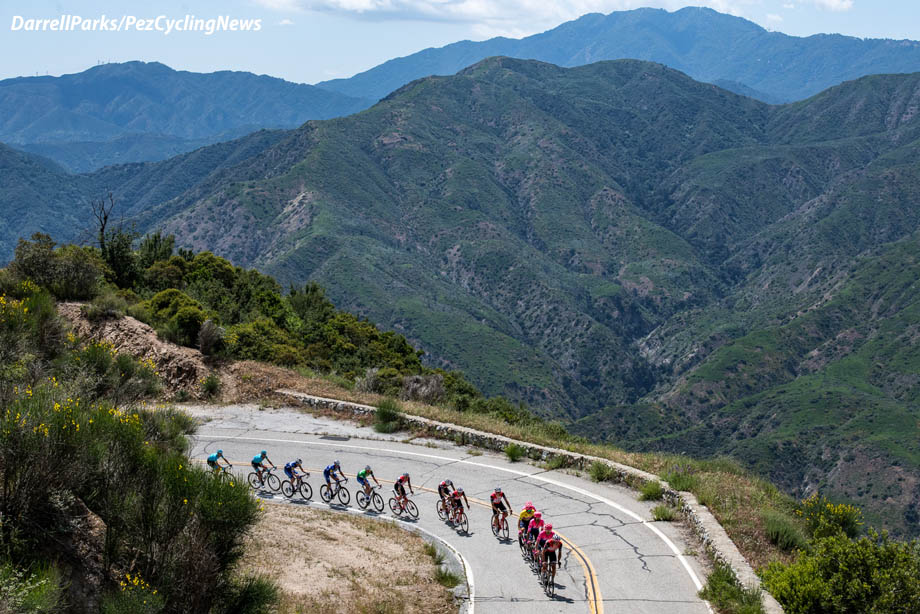 BORA-hansgrohe’s 25-year-old German rider Max Schachmann, who began the day in fifth place and within reach of the overall win, attacked the peloton with less than eight miles left to ride and quickly caught then passed the lead group, the day’s first threat to the leader board. He nurtured his lead to 45 seconds, becoming the virtual race leader, as Trek-Segafredo and EF Education First worked together to close the gap in defense of their GC riders.

Pogacar and Asgreen rode near the front as the peloton gave chase. Van Garderen dropped off the back of the peloton with about 2.5 miles left to ride as it drove up the pace and bore down on Schachmann, a Giro d’Italia stage winner in 2018. Bennett and Pogacar were at the front of the chase group who caught him with two miles to ride. 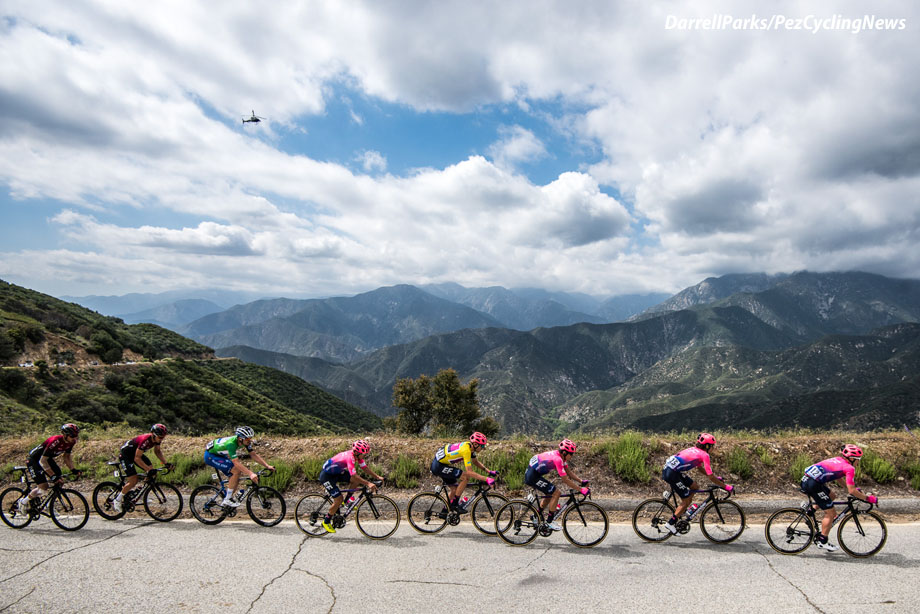 Higuita soon attacked with Pogacar and Bennett responding, and Trek-Segafredo’s Richie Porte (AUS) following the trio, then leaped out to a solo lead with 1.7 miles left before Pogacar caught up to him in the final half-mile and sailed past on the final corner to victory.

“I think for sure my form is better now than what it was when we started. We’ve done some big days and I feel that I’ve gotten better but today is a really hard day… there’s no easy day in these races but today is a proper climb,” said Porte earlier today. 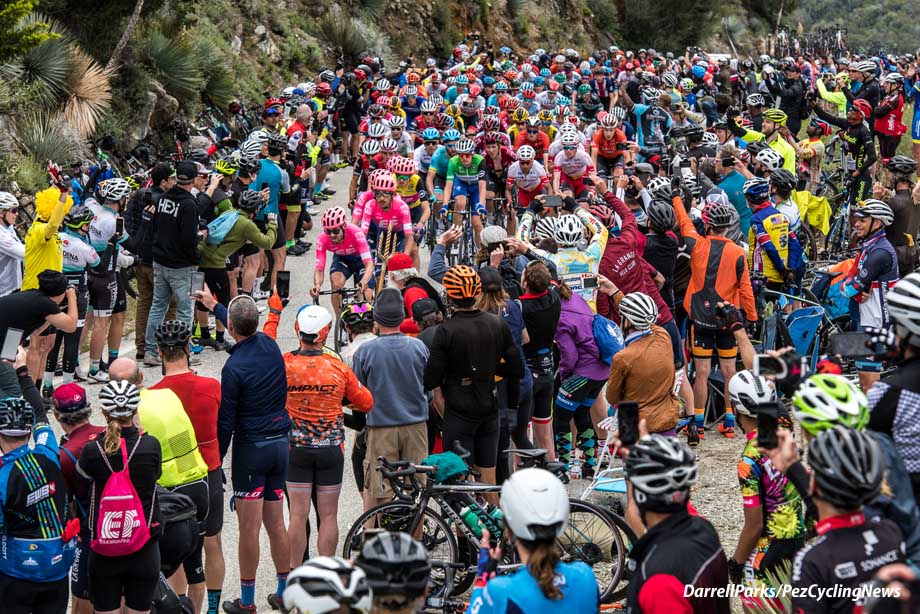 “We have a plan, we had a good team meeting, and the most important thing is there’s going to be pink on the top step of the podium tomorrow,” said van Garderen before the stage. “We expect an aggressive race out there but the fact that we have such a strong, deep team, I think that’s obvious to our advantage.”

AMGEN Tour of California Women’s Race Empowered with SRAM
The Boels Dolmans Cycling Team staked their claim of Mt. Baldy at the midpoint of the Amgen Tour of California Women’s Race empowered with SRAM, with the powerhouse duo of Katie Hall (Oakland, Calif.) and Anna van der Breggen (NED) coming over the summit finish together. Hall, the reigning race champion, picked up her first stage win this year, with van der Breggen putting more time into her overall race lead established yesterday when she rode solo to a Stage 1 win. The World Champion will ride into tomorrow’s race conclusion in Pasadena +29” ahead of Hall, who moved up to second place in the overall, and +1:06” up on CCC-Liv’s Ashleigh Moolman-Pasio (RSA) in third.

Hall’s epic climb catapulted her to the top of the QOM competition, which she has won twice before in this race, with Astana’s Blanca Liliana Moreno Canchon (COL), and van der Breggen still leading the Sprint competition by a large margin.

The Boels Dolmans duo took the lead on the steepest part of the climb up the mountain and was followed by Moolman-Pasio (RSA) in third for the stage. Before Boels Dolmans attacked, WNT ROTOR Pro Cycling Team’s Kathrin Hammes (GER) and CANYON//SRAM Racing’s Omer Shapira (ISR), who earned the Breakaway from Heart DiseaseTM Most Courageous Rider Jersey for time spent in a solo lead up the steep gradient, were out front as the last standing from the three-woman breakaway, with Team Sunweb’s Coryn Rivera (Tustin, Calif.) having fallen back to the chase group. Cogeas Mettler Look Pro Cycling Team’s Olga Zabelinskaya (UZB) then made an appearance in the lead group along with Moolman-Pasio.

Before the climbing began, speeds were high (nearly 30mph), as the peloton pushed off for Stage 2 presented by Visit California from Ontario and Valcar Cylance Cycling kept up the pace trying to thin out the lead group. Their rider Elisa Balsamo (ITA) placed second for yesterday’s stage and went into today leading the TAG Heuer Best Young Rider competition, however, Team Sunweb’s Juliette Labous (FRA) overtook that lead today.

Looking Ahead – Race Conclusion
Tomorrow’s Amgen Tour of California will see the women’s and men’s teams ride from veteran Host City Santa Clarita to Pasadena’s famed Rose Bowl, where the winners will be decided.

Fans can stay up to date on the race via daily live airings on NBC Sports Network with the May 18 conclusion live on NBC, and via the free Amgen Tour of California App, Voxwomen and daily recaps on the race’s youtube channel.