PeloPics: Tejay van Garderen (EF Education First) held onto his overall lead by 4 seconds on Kasper Asgreen (Deceuninck – Quick-Step and 6 to Gianni Moscon (Ineos) after a hard day to Ventura on Thursday. There were break-aways and chases throughout the day, in the end Bahrain-Merida’s Ivan Garcia Cortina took the stage honors. 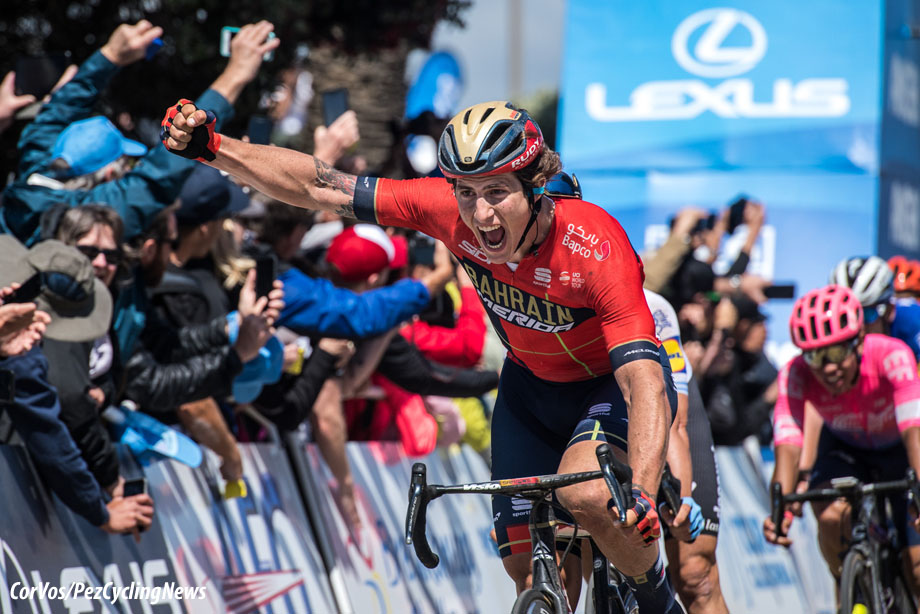 Though intact, the leader board has grown tighter after day five of the Amgen Tour of California, with the crucial Queen Stage on tap tomorrow. 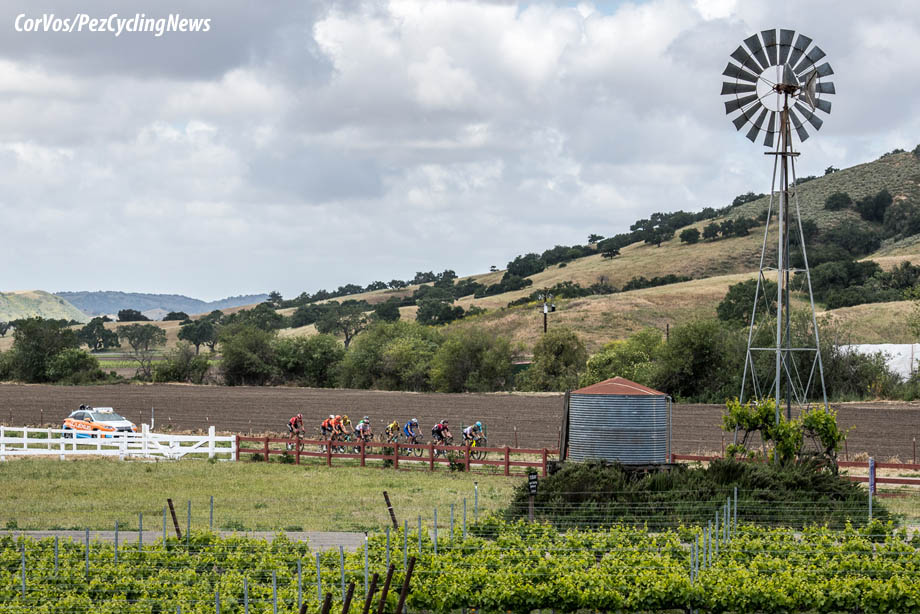 Stage 5 presented by Lexus from Pismo Beach to Ventura was the longest road day of the week at 136.4 miles. BORA-hansgrohe’s three-time World Champion Peter Sagan (SVK) was determined to get into the breakaway today with multiple attempts, finally bridging to the early leaders with a small collection of others to form the day’s lead group of 12. However with no Sprint wins today, Deceuninck – Quick-Step’s Kasper Asgreen claimed enough bonus points to pull the green jersey from Sagan as well as move two seconds closer to the race leader Tejay van Garderen (Tacoma, Wash.) of EF Education First Pro Cycling, who now leads by just four seconds with two racing days left.

BAHRAIN-MERIDA did some heavy lifting throughout the stage to chase down the breakaway and put their sprinter Ivan Garcia Cortina (ESP) into the mix for the final bunch sprint where he seized his first pro victory, fending off some of the race’s Sprint favorites and overtaking Deceuninck – Quick-Step’s Maximiliano Richeze (ARG), who came in second for the stage. 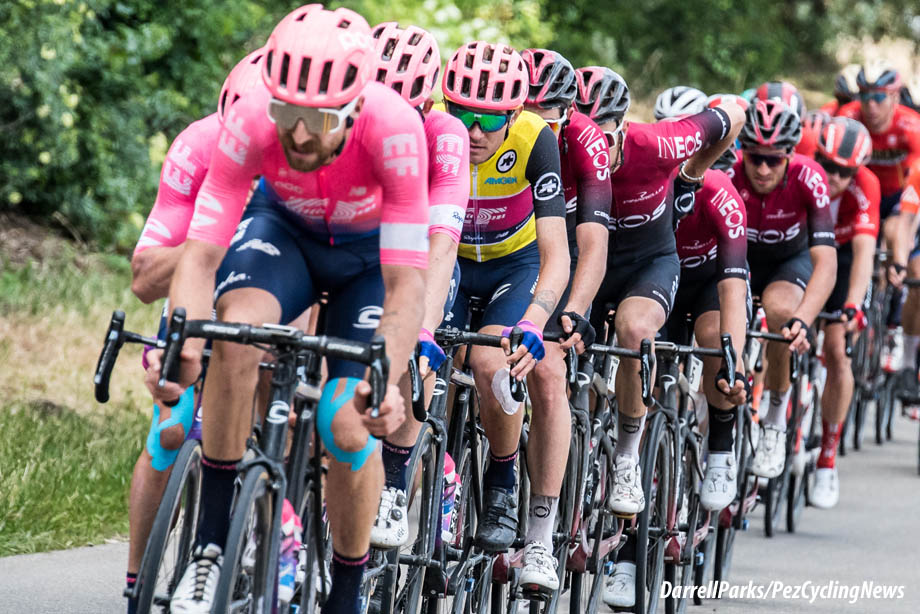 On the fast approach to Ventura, EF Education First Pro Cycling’s Sergio Higuita (COL) attacked at the top of the final climb with Jumbo-Visma’s 2017 race champion George Bennett (NZL) on his wheel. The two sped together over the final two miles before being caught by a large chase group containing Higuita’s teammate and race leader van Garderen (Tacoma, Wash.). Higuita remained in hot pursuit to the finish, picking up third place and valuable sprint bonus points; with Bennett claiming points at an intermediate Sprint, both rose in the overall standings to 6 and 8 respectively. 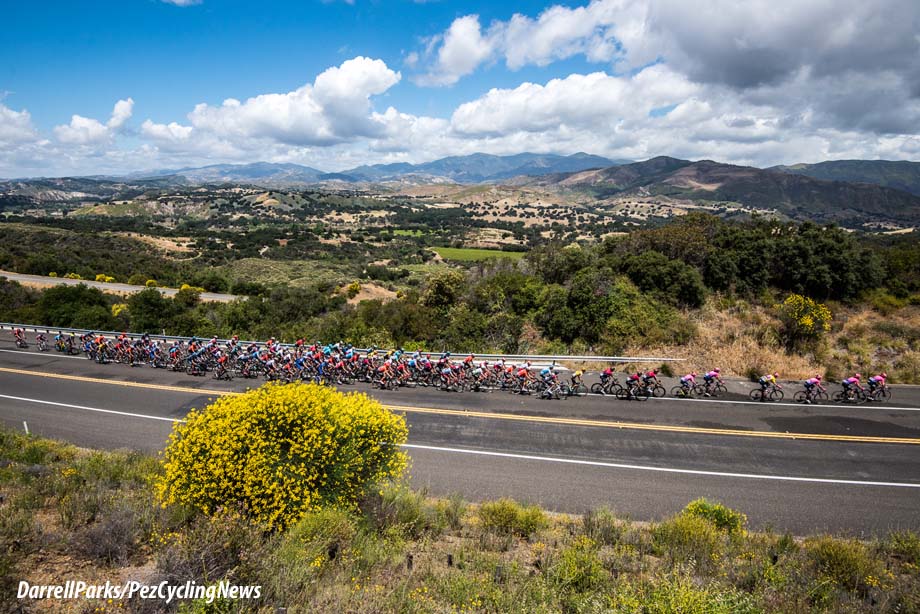 “We just gotta try to get into the base of Baldy with our top guys with as fresh of legs as possible, which means it’s going to be a lot of heavy lifting from guys like Lawson [Craddock], Alex [Howes] and Lachlan [Morton] – but those guys have been stellar all week, and they rode like champions today,” said van Garderen.

The wind and challenging hills saw the peloton shatter and reform many times over, including on the final climb to the finish. As the teams were organizing to launch their sprinters to the line, World Champion Anna van der Breggen (NED) of the Boels Dolmans Cycling Team attacked and ran away to a solo victory despite a wicked headwind. Van der Breggen is a returning race champion, having won the event in 2017.

“There was a beautiful climb 5k’s from the finish so it was a good moment to go and try to see if I could go solo to the finish line,” said van der Breggen. “It was up to us on that final climb to try something…I’m really happy for the team and for myself to take the stage win and to have a good start on this stage race.”

Cogeas Mettler Look Pro Cycling Team’s Olga Zabelinskaya (UZB), the former Russian National Time Trial Champion and three-time Olympic medalist, attacked at Casitas Pass and grew her lead to a minute and a half, but was caught shortly before the finish where attacks then began flying. Valcar Cylance Cycling’s Elisa Balsamo (ITA) came in second (+18”), with Astana’s Arlenis Sierra (CUB) in third (+18”) for the day.

Earlier on the stage, presented by Lexus, Hagens Berman | Supermint Pro Cycling’s Lindsay Goldman (Scottsdale, Ariz.) made a solo break that held for nearly an hour, earning her the Breakaway from Heart DiseaseTM Most Courageous Rider Jersey.

“It’s [the women’s race] grown every year…the challenges are huge and the field is amazing,” said Amgen Tour of California Race Ambassador Kristin Armstrong, a decorated former pro and three-time Olympic Gold Medalist. “The platform that the Amgen Tour of California provides for women’s racing across the world is very impactful. In fact today, the racers that are here at the race, you’re going to see them one year from now in the Tokyo Olympic Games. The qualification for the Olympics for all federations starts now at the [Amgen] Tour of California. And I’m telling you what, there’s a lot of races within the race happening out there this week…it’s fantastic, and it’s thrilling.”

Looking Ahead
Tomorrow’s Amgen Tour of California will see the women’s and men’s teams contest the grueling climb from Ontario to the summit of Mt. Baldy, a critical stage for riders pursuing the overall win. Both races wrap up on Saturday at Pasadena’s famed Rose Bowl.

Fans can stay up to date on the race via daily live airings on NBC Sports Network with the May 18 conclusion live on NBC, and via the free Amgen Tour of California App, Voxwomen and daily recaps on the race’s youtube channel.