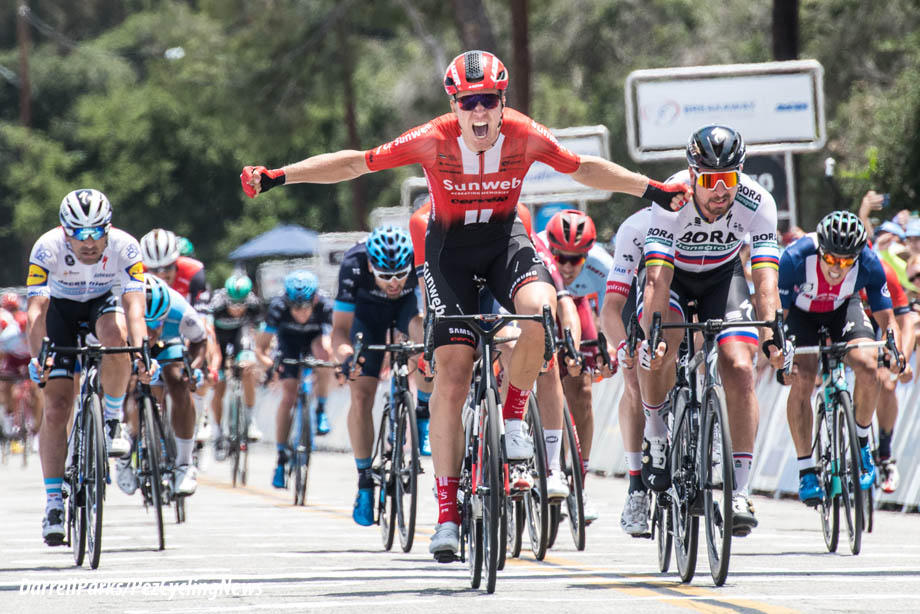 UAE Team Emirates’ 20-year-old Tadej Pogacar (SLO) is the 2019 Amgen Tour of California champion after a fast and furious sprint finish at Pasadena’s Rose Bowl concluded a week of racing. 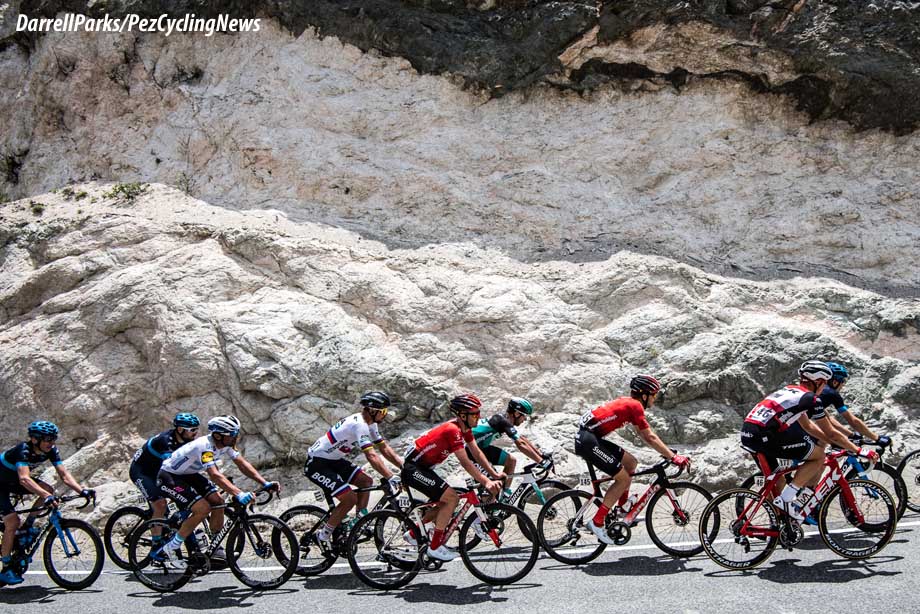 Two young first-timers to this race vied for the overall championship in an epic battle yesterday when Pogacar took over the race lead after the Queen Stage summit finish at Mt. Baldy, coming into the final stage +:16” ahead of EF Education First Pro Cycling’s 21-year-old Sergio Higuita (COL). With their time gap unchanged today, Higuita finished in second place overall.

Beginning the day in sixth place overall (+:22), Deceuninck – Quick-Step’s Kasper Asgreen (DEN) fought to make up time with bonus points today. He joined a chase group that brought the peloton back together before it reached Pasadena, then leapt out to a solo lead on the first of three passes across the finish line to claim maximum Sprint points in the finishing circuits. UAE Team Emirates worked hard to reel him back in defense of Pogacar, who will also go home with the TAG Heuer Best Young Rider Jersey in addition to his yellow jersey. 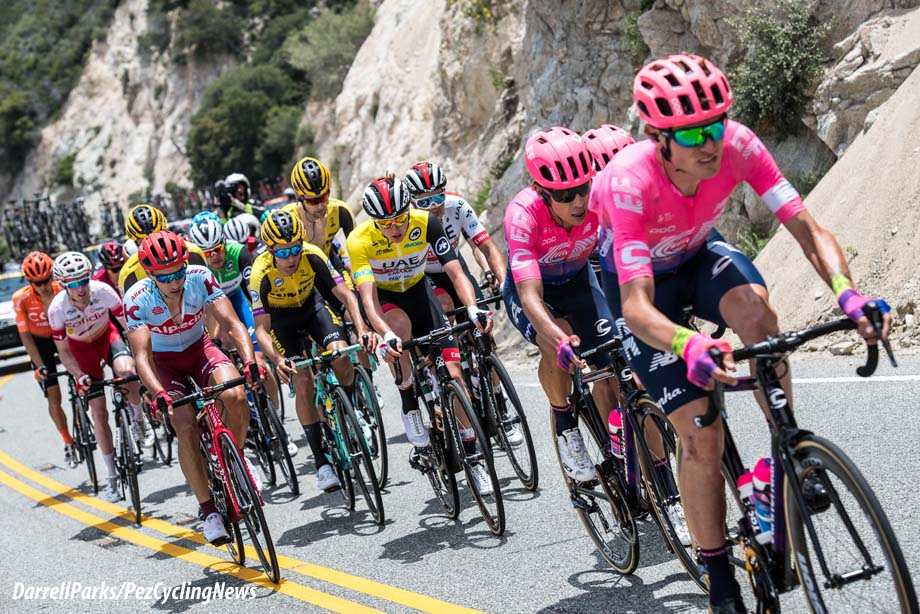 “This race was my main goal this year. I knew that I was prepared. I surprised myself a bit that I took the overall win. But I’m really happy and looking forward to next season,” said Pogacar.

Ultimately the peloton reunited with the WorldTour teams angling for placement in the bunch sprint finish, and Asgreen’s dash propelled him up the leader board from sixth to a third place overall podium spot (+:17), just one second behind Higuita, as well as locked his win in the Sprint competition. 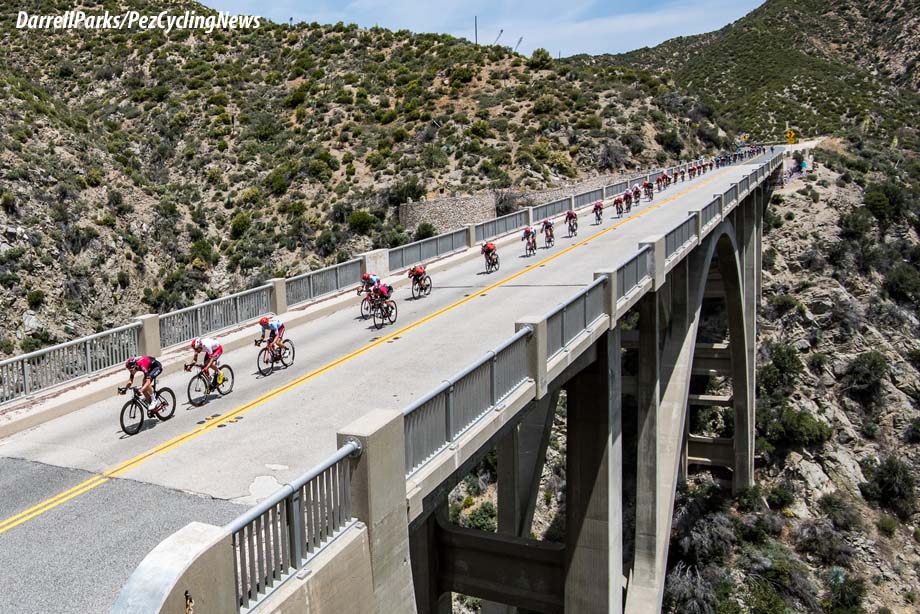 Known as a race that brings together the world’s best riders while launching the careers of cycling’s next generation, past Amgen Tour of California winners have included French rider Julian Alaphilippe, who set a new race record for the youngest champion at 23 when he won in 2016, which was then overtaken in 2018 by Columbia’s Egan Bernal who won at age 21.

“What a fantastic week. This is our 14th edition, and I have to say this is our best edition yet. We had the strongest field for both the men and the woman….There have been spectacular performances by all of the riders,” said Kristin Klein, president of the Amgen Tour of California and executive vice president of AEG Sports. “We continue to have a platform that is a launching pad for all of the young talent. Looking back at our race, the likes of Peter Sagan, Mark Cavendish, then the past few years with (Julian) Alaphilippe and (Egan) Bernal, (Fernando) Gaviria, George Bennett… then this year, look at all the young talent. It’s phenomenal to see it, and we’re proud that we continue to be a launching pad for all of the riders. Congratulations once again to everybody,” 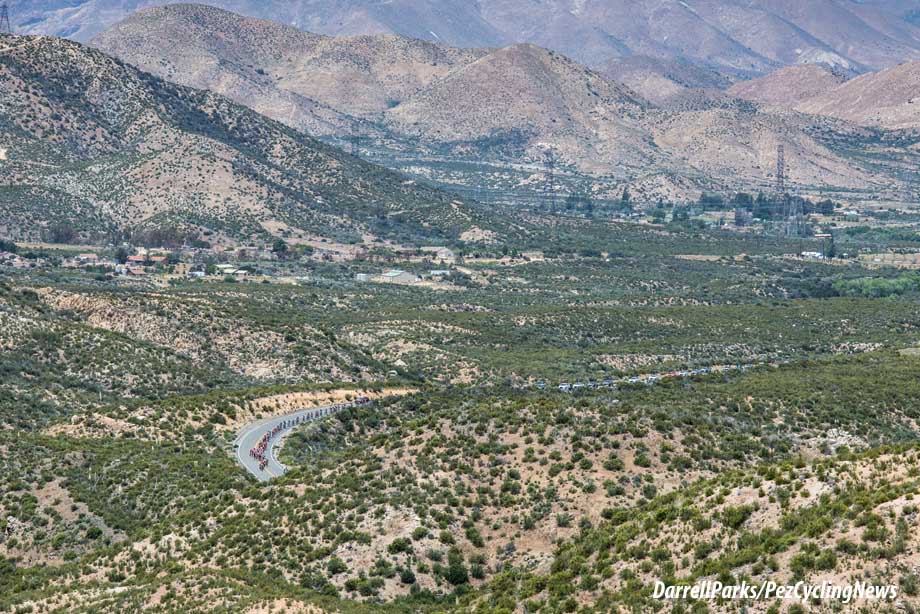 Stage 7 presented by Amgen wound riders 78.3 miles from veteran Host City of Santa Clarita to Pasadena. Two former race champions who won the title in Pasadena were in the race this year: Slovak three-time World Champion Peter Sagan (2015), who placed second for today’s stage in a furious sprint, and New Zealand’s George Bennett (2017), who ended the race in fourth place overall.

In the final meters of the race, Sagan and USA Cycling National Teams’ Travis McCabe (Prescott, Ariz.) sprinted shoulder to shoulder until Astana attacked and Team Sunweb’s Cees Bol (NED) leapt out and narrowly outpaced Sagan for the stage win. 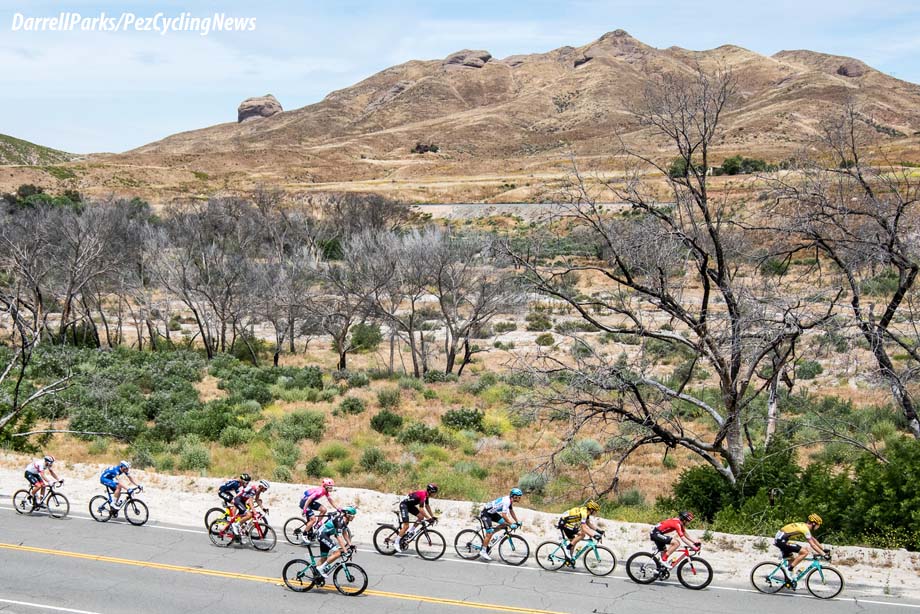 EF Education First Pro Cycling’s Tejay van Garderen (Tacoma, Wash.), who wore the Amgen Race Leader Jersey until yesterday’s result, finished in ninth place this year (+1:22”), and still holds the race record for the largest winning margin of all time with his 2013 overall win +1.47” ahead of Michael Rogers.

Now teammates, the two had the same overall result as competitors in 2017 when van der Breggen pulled out the win 1 second ahead of Hall, who went on to win the 2018 race. In addition to her second race championship, van der Breggen will take home the Visit California Sprint Jersey. This is Hall’s third consecutive overall podium finish.

“It feels really good. It was a hard stage race. They had three beautiful stages, and they didn’t make it easy for us the last day….To finish first and second is an amazing result,” said the Boels Dolmans two-time race champion.

The World Champion was challenged for the green jersey today by Valcar Cylance Cycling’s Elisa Balsamo (ITA) who outsprinted a tight field to take the stage win just ahead of Astana Women’s Team’s Arlenis Sierra (CUB), who placed second for the stage, and Hagens Berman | Supermint’s Leigh Ann Ganzar (USA) in third.

Van der Breggen came into the final day +29” ahead of Hall, which held through the final stage, and CCC-Liv’s Ashleigh Moolman-Pasio (RSA) held onto her overall third place podium spot (+1:06”).

Astana’s Blanca Liliana Moreno Canchon (COL) picked up the maximum points on today’s climb, for the Lexus Queen of the Mountain Jersey win over Hall.

In the women’s event unfolding for the first time exclusively in Southern California, Stage 7 presented by Amgen wound riders 78.3 miles Santa Clarita to Pasadena with three fast circuits around the Rose Bowl to conclude.

Race Recaps
Fans can relive their favorite moments via the free Amgen Tour of California App, Voxwomen and daily recaps on the race’s youtube channel, as well as a race recap show tonight on NBCSN from 8-10 p.m. PDT. A women’s race recap show will air May 23 from 9-10:30 p.m. PDT.