2020 Tour Presentation PeloPics: Just one day to go before the delayed 2020 Tour de France departs from Nice, in the south of France, for stage 1. The teams’ presentation of the 107th Tour de France took place on Masséna square in Nice in style but in front of a limited number of people due to Covid-19 restrictions.

The cyclists rode for 400 metres to reach the stage where local artists Tambour du Bronx, world champion beatbox band Berywan, dancers from Spotlight Dance Studio, BMX freestylers from Whole Street and acrobats Duo MainTenant performed. The whole show was live on digital platforms of seventeen broadcasters as well as on the official Facebook page and Twitter account of the Tour de France and on the Facebook page of the city of Nice. 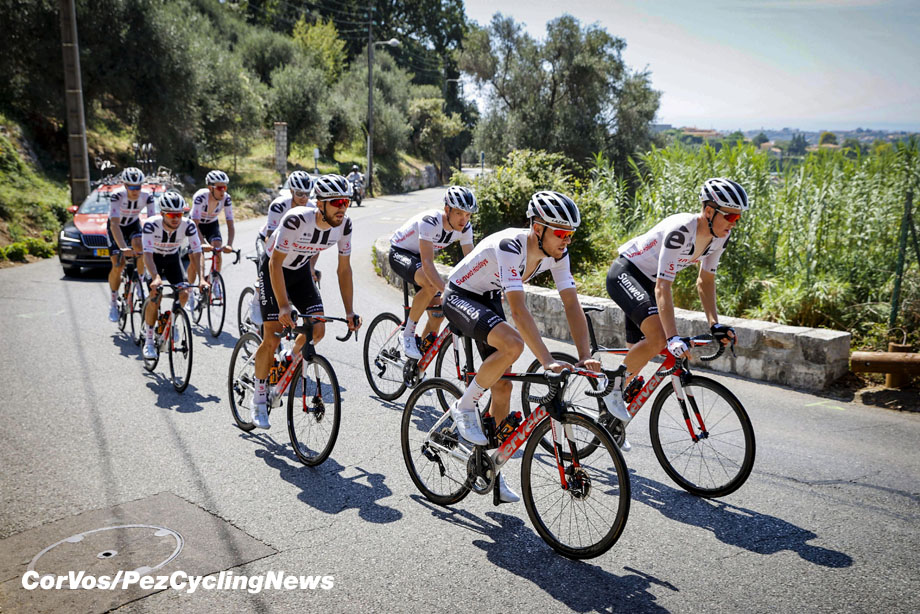 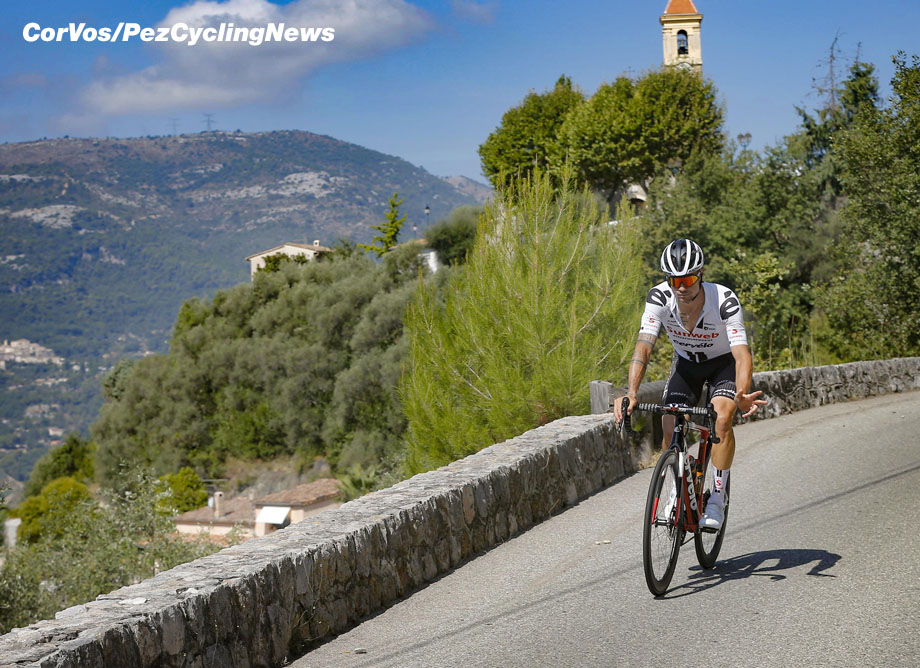 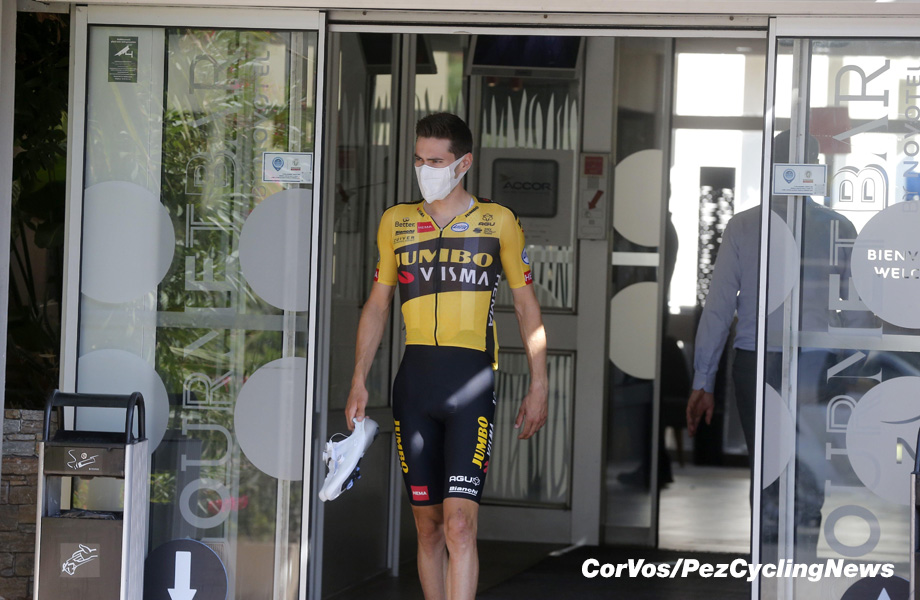 Jumbo-Visma’s Tom Dumoulin spoke of his teammate, Primoz Roglič: “My impression of Primoz before was that he was very focused on himself. My opinion changed when I got to know him better, he’s very nice guy but still focused on performing at his best. I’ve improved my condition during the Tour de l’Ain and the Dauphiné, I needed those races. It’s a good feeling to be on the start line of the Tour de France. It won’t be the same without Steven Kruijswijk who would have been one of the best riders of the race. His absence forces us to change our tactics a little bit. Now it’s Primoz or me who goes for GC. Our aim is to be close to the podium in the last week of the Tour.” 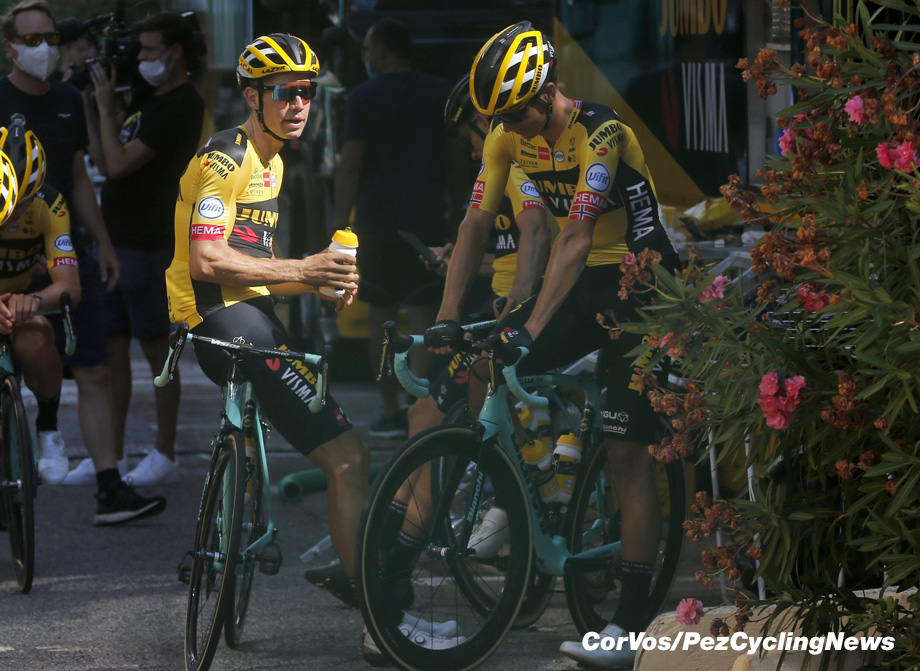 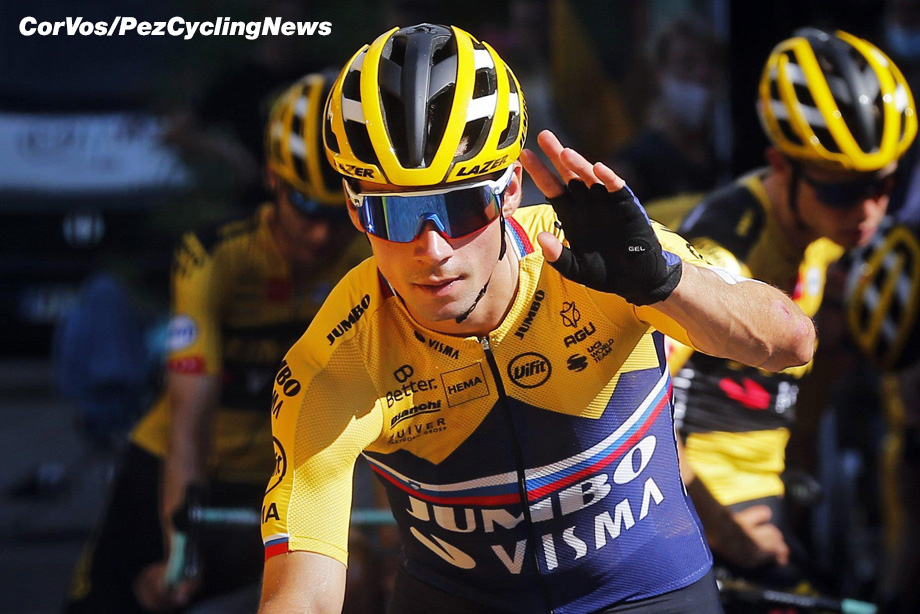 Primoz Roglič is happy to make the start of the 2020 Tour de France after his crash in the Dauphine. The Slovenian champion will be co-leader of the Jumbo-Visma team with Tom Dumoulin, who used to be his rival: “When Tom was my opponent, I tried to learn something from him because he was in front of me in those years. I’m happy that I managed to be at the start of the Tour de France. I take it as a good news. It’s nice to be here in Nice.” 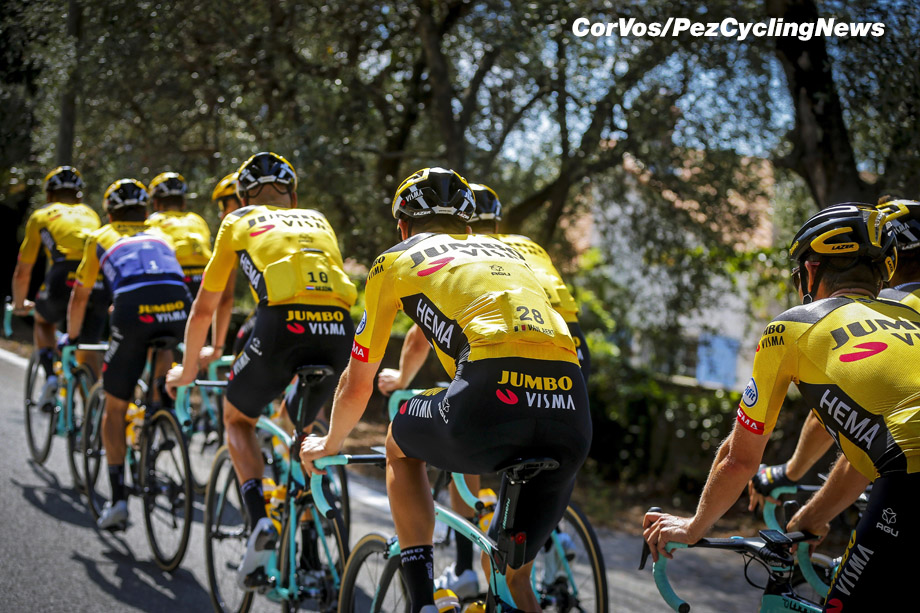 Will it be Jumbo-Visma vs INEOS Grenadiers? 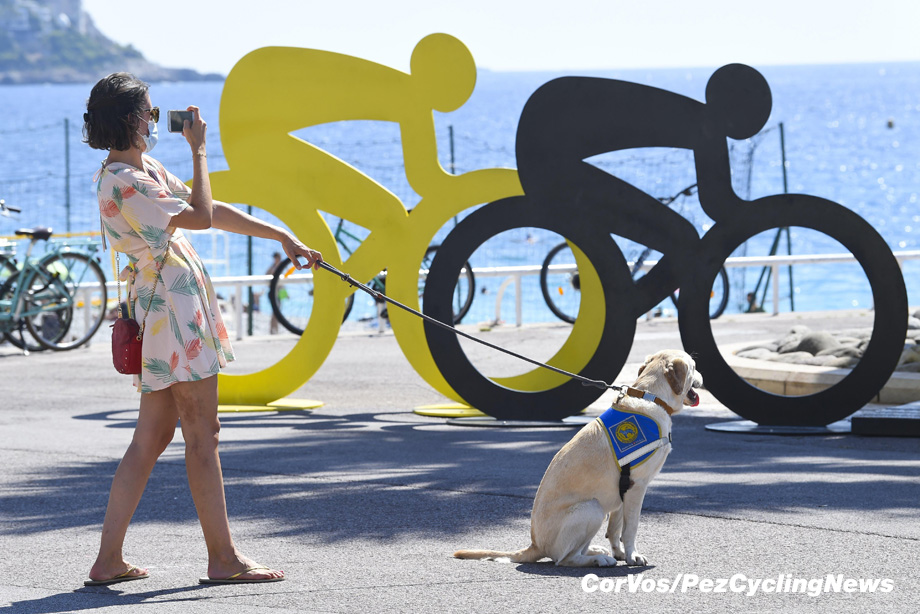 Nice is looking nice for the Tour 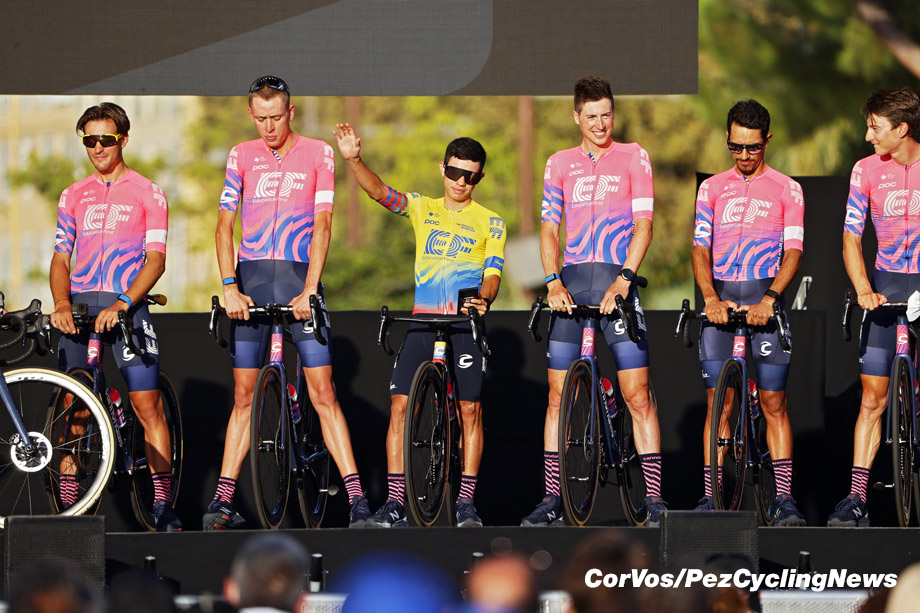 EF could have some surprises up their sleeves

EF Pro Cycling’s Colombian national champion, Sergio Higuita, is riding his first Tour de France: “This is going to be my first Tour de France and I can honestly say I’ve never been so excited to be racing. To be going to the Tour is a huge goal for many cyclists and for me it’s incredible to think that in a few days I’ll be there achieving one of my biggest life goals, to line up on that start-line. Also to be doing it wearing the Colombian national champion jersey makes it all the more special. To be lining up alongside riders who for many years I’ve watched race on the television also makes it really special. I am really pumped to be going, and want to have the best race possible, going out there fighting every day. There will be great moments and there will be hard moments, but just facing them and enjoying being there — I can’t wait.” 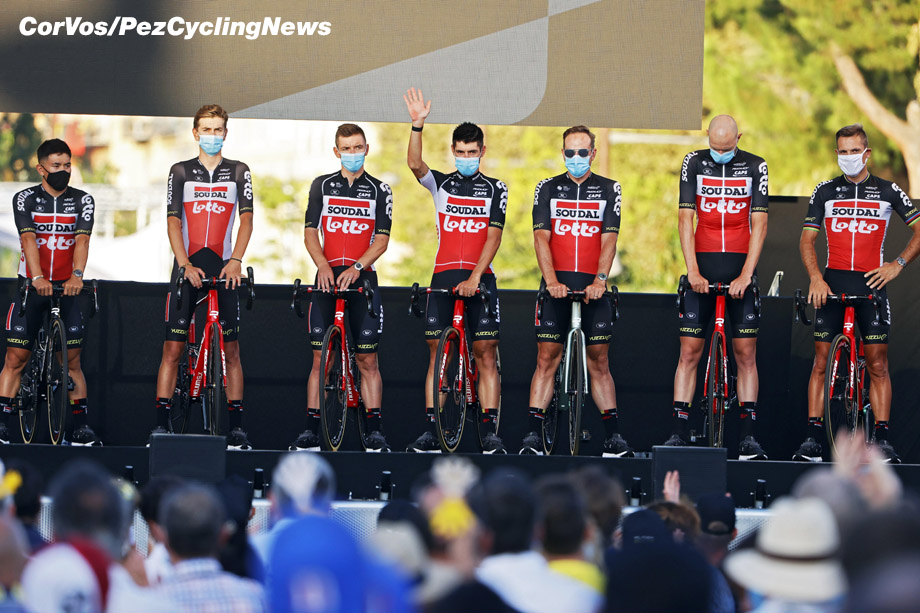 Caleb Ewan is a hot favourite for stage 1 and more after he was the most successful sprinter in the 2019 Tour de France. “I haven’t looked too closely to the parcours yet but there should be about six opportunities for the sprinters this year. Partly due to the parcours that seems more of a GC kind of Tour de France, some sprinters are missing but there are still riders like Elia Viviani, Sam Bennett and André Greipel and as always, it’ll be hard to win. Because of my three wins last year, there are expectations based on that, so I feel more pressure than last year at the start of my first Tour de France. The goal is always to win a stage but if I happen to be the best sprinter in this race, I want as many wins as possible. Since Milan-Sanremo, I’ve stepped up again another level and I’m ready to take up the challenge on Saturday. Stage 1 is not too hard for me. I don’t expect a straightforward sprint. It’ll depend on how the race goes on the climb but there’s a lot of time to come back in the valley where there’s usually headwind which makes it easier to come back. The conditions may be rainy and lower temperatures suit me better than what we experienced in Milan-Sanremo.” 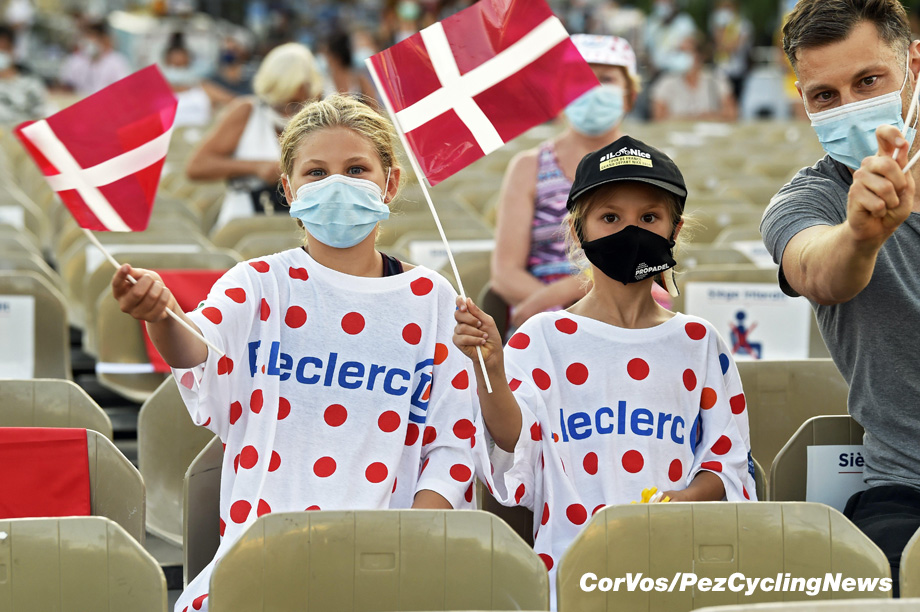 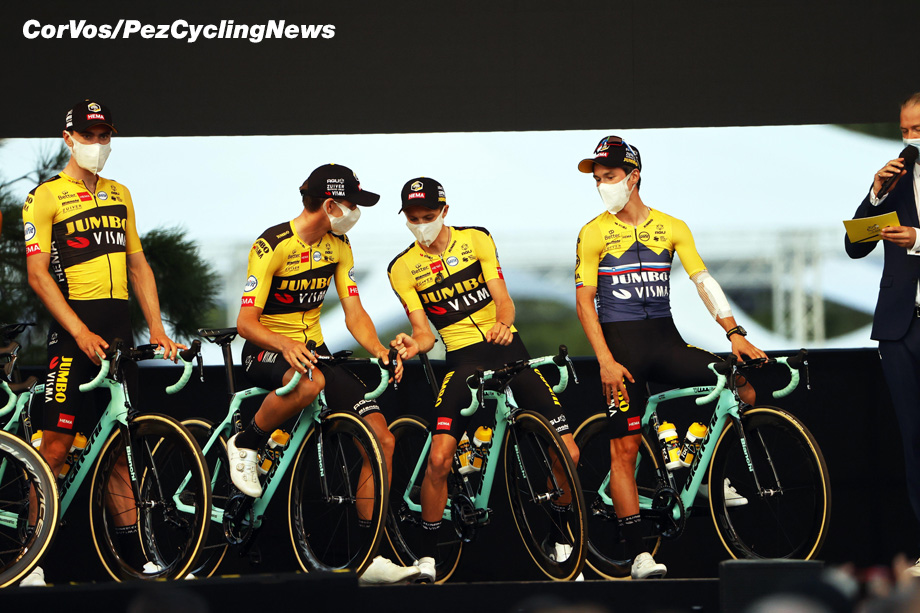 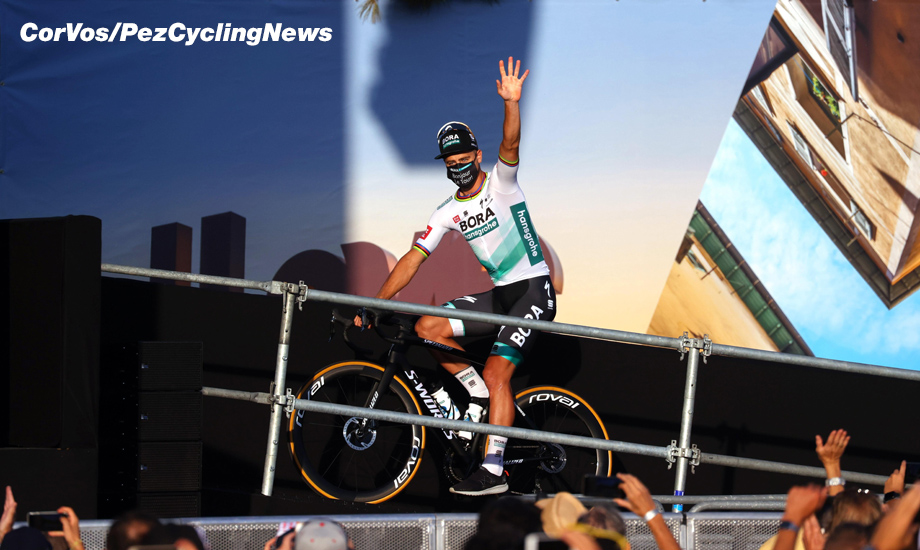 Peter Sagan has been quiet recently 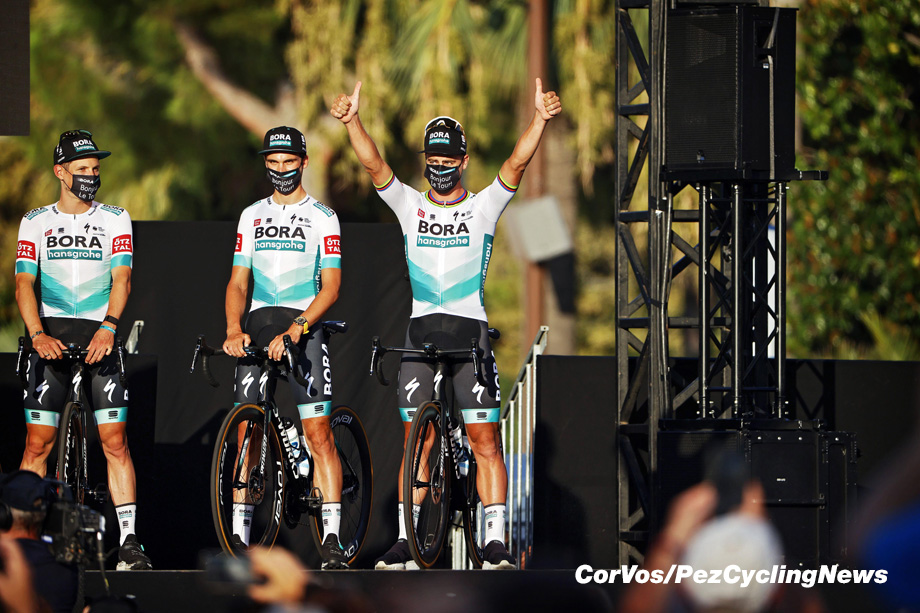 Another green jersey for Sagan in 2020

Emanuel Buchmann is another rider who nearly didn’t make it to Nice: “This has been a bitter setback. I actually thought that the Tour was over when I couldn’t get up on my own after the fall. But luckily nothing was broken. I concentrated on therapy last week and could only get back on the bike at the end of the week. Over the weekend, training didn’t go as I would have liked. This entire incident has really set me back. To suffer a fall like that was such a shame because I was in really good shape. At the Dauphiné, I was the strongest on the mountain behind Roglic, together with Pinot. Now there are a few question marks hanging over my head, especially since the race is about to kick off in earnest so soon. There’s no time for a transition, because on the second stage, we’ll already be heading into the mountains. We’ll just have to wait and see how far I can make it up there. I can only tackle the Tour from day to day now.” 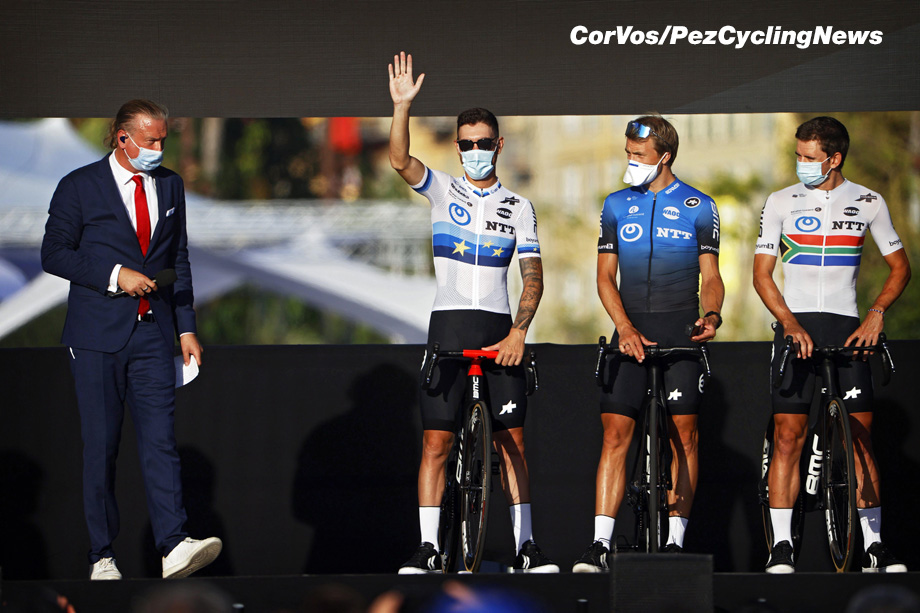 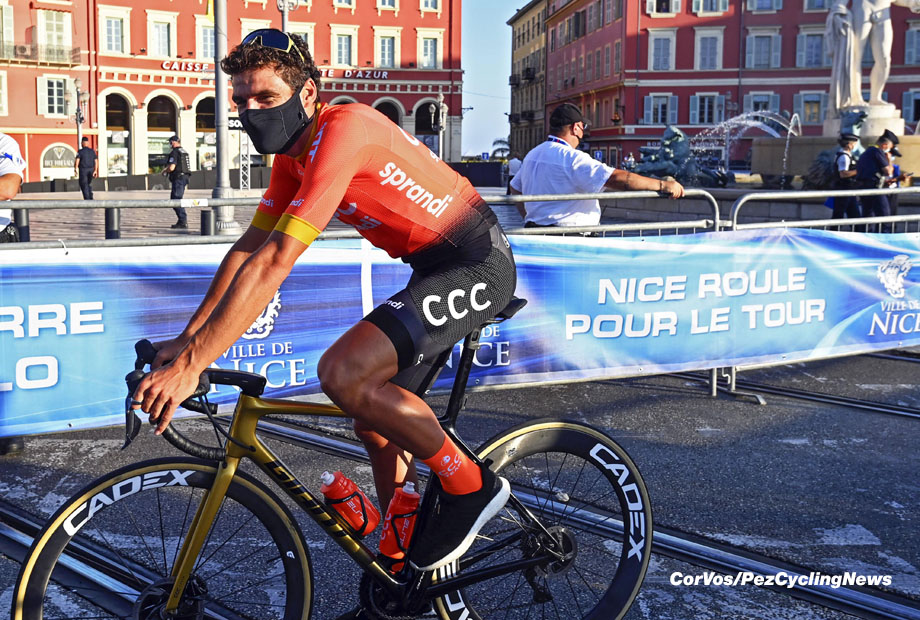 A spell in yellow for Van Avermaet

Stage wins and some time in yellow would suit the Olympic champion, Greg Van Avermaet: “I’m feeling good and I’m excited to get to Nice and start the Tour de France. We all know it’s going to be a different race and everyone is lining up without many race days in the legs so it’s hard to know what to expect but so far, I’ve been happy with my form. I think every day will be even more of a fight than ever, for both the stage wins and General Classification, so we’re in for a tough race. But that suits me and I think there are a few stages that are good for me. We have a strong team with a lot of experience and I think we can work well together to achieve the team’s goals. This will be my last Tour de France with Continuum Sports so it will be a special one for me and I’m even more motivated to get a good result.” 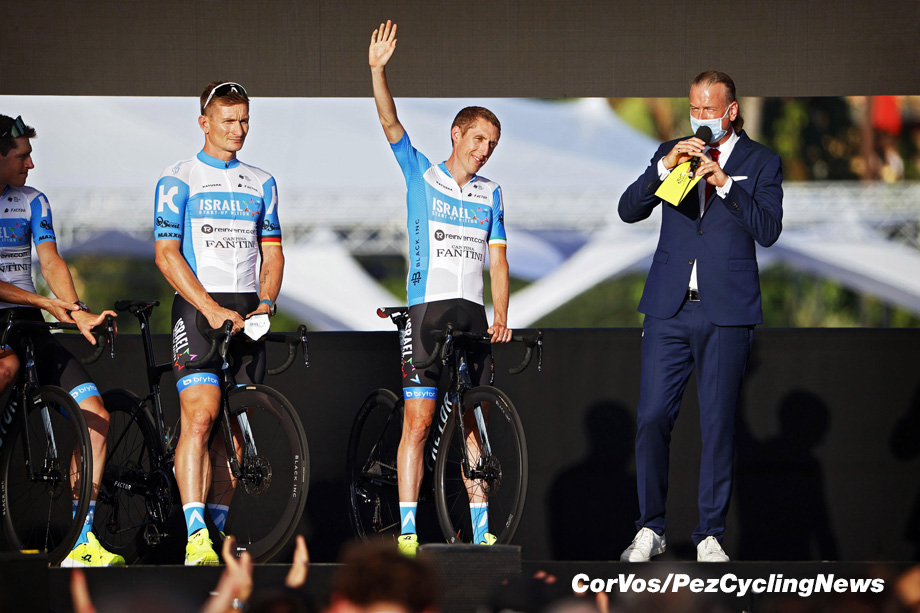 Dan Martin – Lucky to be in Nice

Despite abandoning the Critérium du Dauphiné with sacral fracture twelve days ago, Dan Martin is at the start of the 2020 Tour de France: “I wasn’t sure if I’d be able to ride,” the Irishman said in the press conference. “But my recovery has gone incredibly well. Last Monday, I was already back on the bike. I ride with a little bit of discomfort but cycling isn’t a comfortable sport anyway. I’m happy to represent the first Israeli team at the Tour de France. I don’t have any ambition for the first few stages. I have no idea how my body will react on such a hard terrain but it won’t be long until I race to the front and look for a stage victory. Even before the injury, we had decided that I’d race for a stage win rather than for GC. I’ll take my time and hope to be competitive in the final week.” 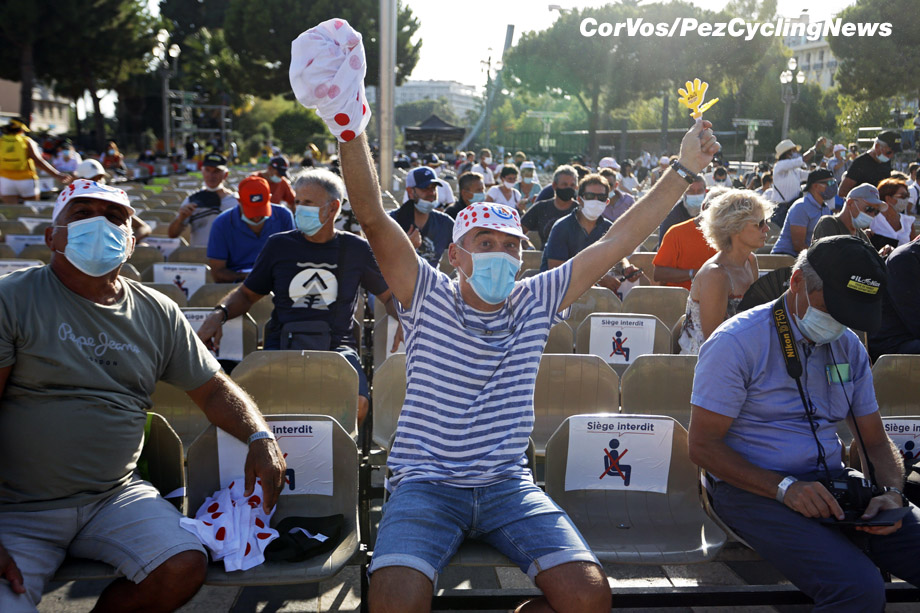 The few fans at the presentation were happy enough 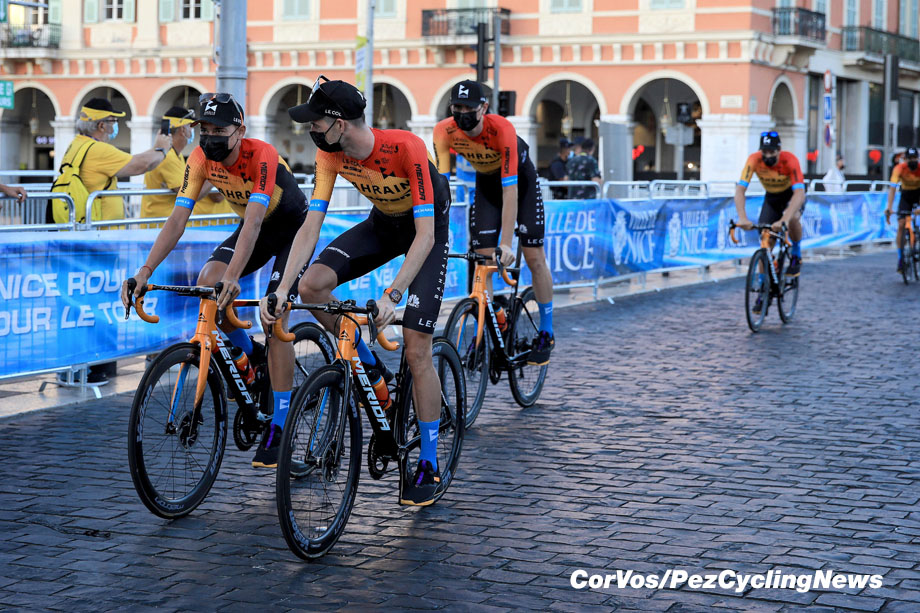 Could this be Mikel Landa‘s Tour? “The Dauphiné and Vuelta a Burgos were both tough races and timely rehearsals for the Tour de France. I’ll be starting this Tour in very good shape, and I am greatly motivated by how I’m feeling, as well as the strength and quality of my teammates who’ll be supporting me on the road. Together, as a team, we can achieve a lot.” 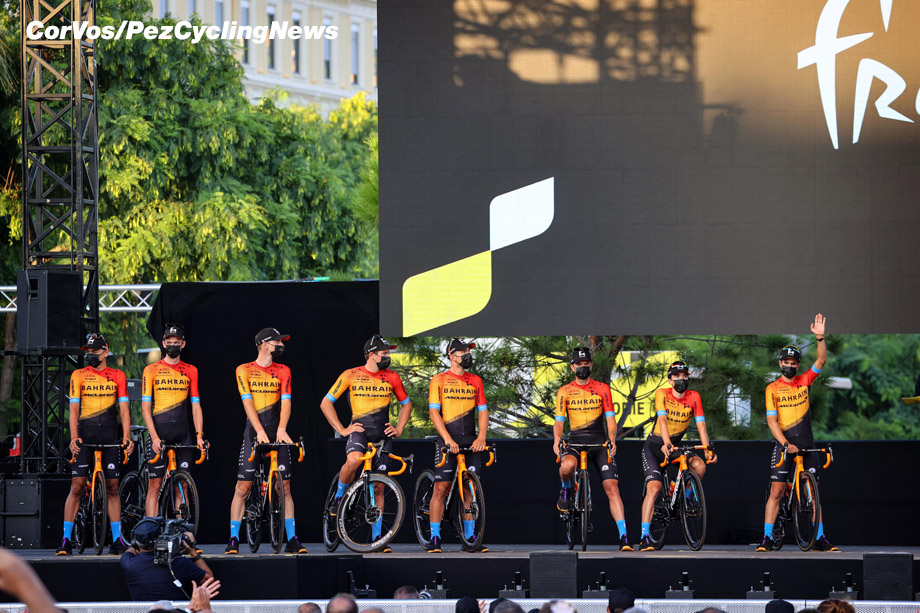 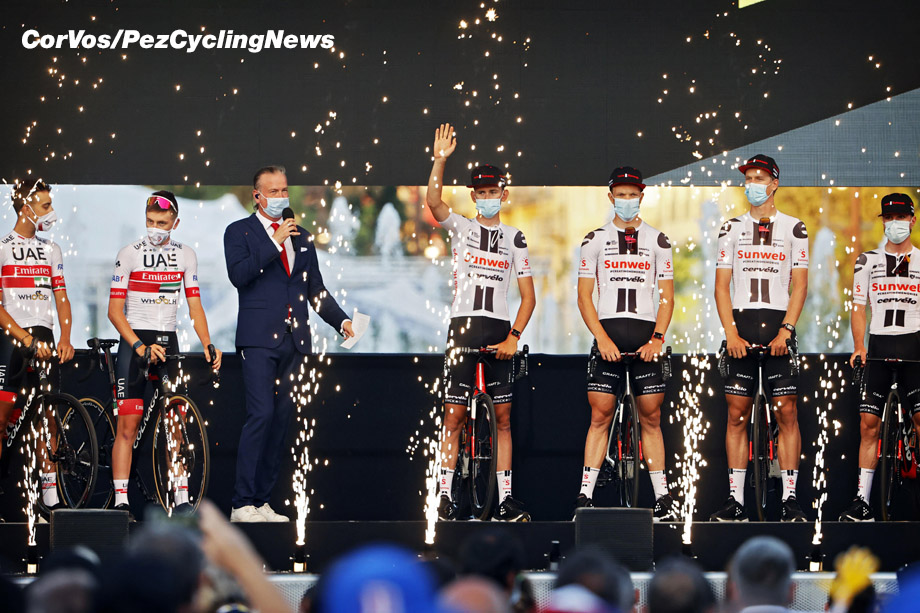 Tadej Pogačar: “I’m a little nervous but mostly excited for my first Tour. At the Dauphine we showed what we could do as a team. We were consistently strong all week: Formolo won a stage, De La Cruz took the mountains jersey and I was high on GC. It was really good preparation for the Tour de France and a sign of what we can do. We know that the Tour will be another step-up but we are confident if all goes well that we can do good things.” 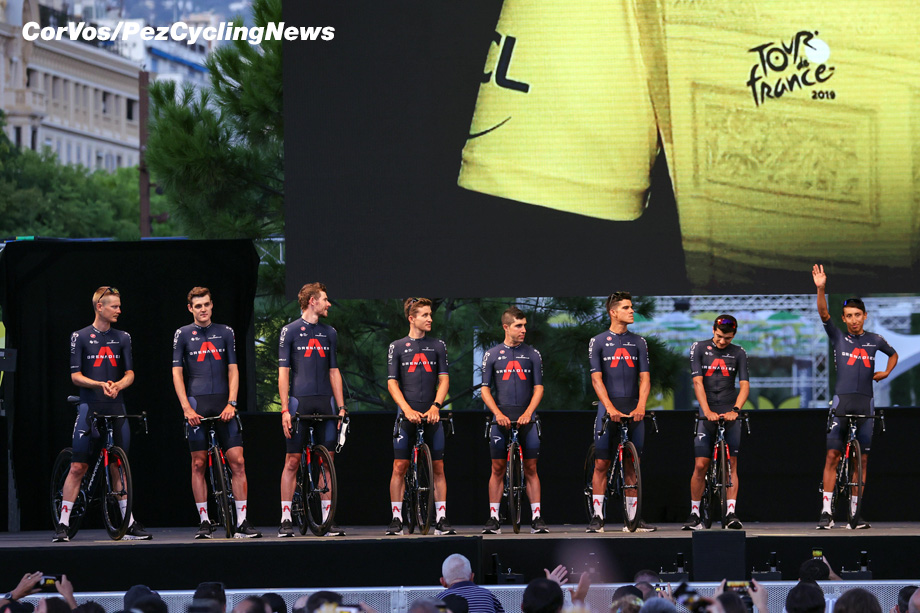 INEOS-Grenadiers in their new kit 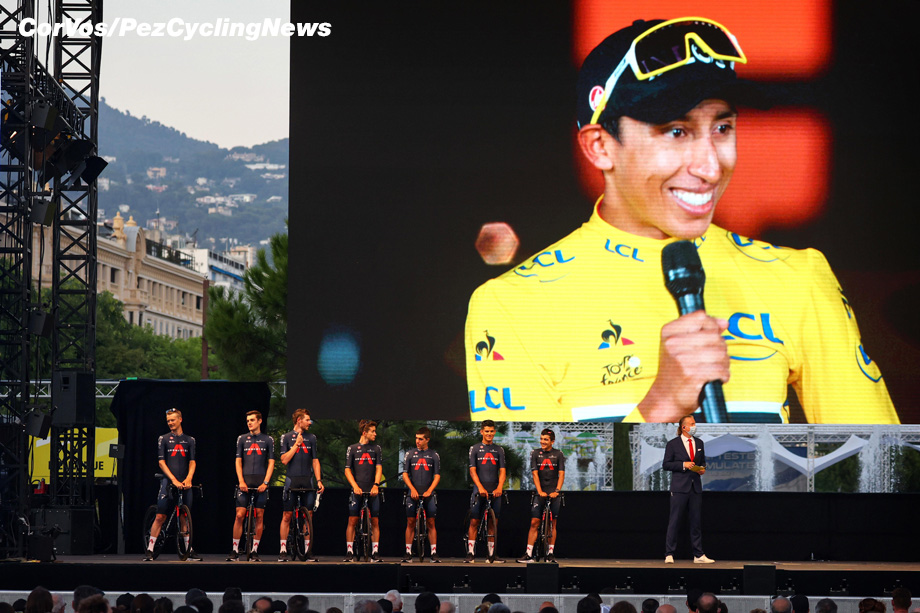 2019 Tour champion, Egan Bernal: “It is special to be riding the Tour de France as the INEOS Grenadiers for the first time. As the reigning champion, it will be different for me this year but I am really excited to be putting the number one on my jersey. We have a really strong team with a good combination of young riders and riders who have a lot of experience, and that is a really important thing for the Tour de France. We all have the same motivation and are ready to give it our all and go full gas.” 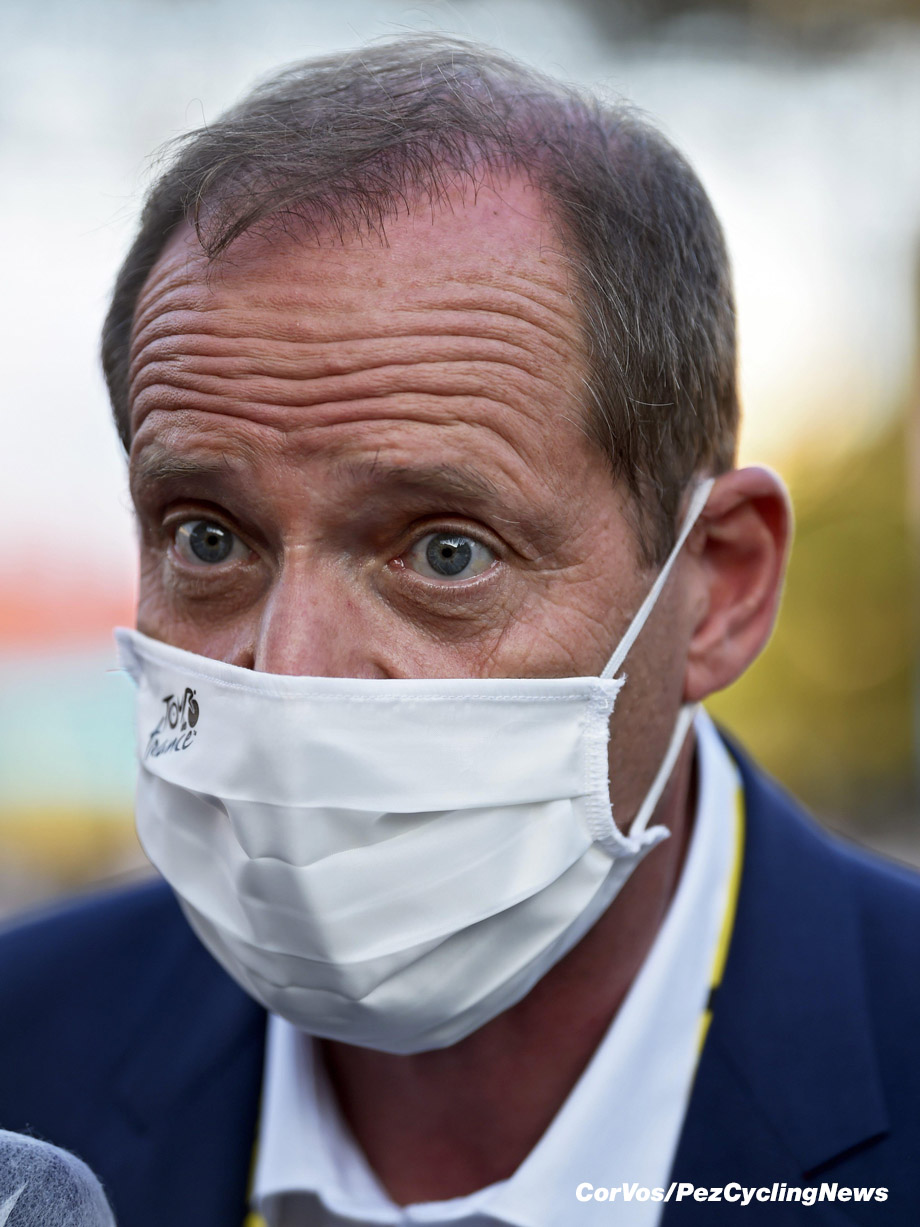 Tour Boss, Christian Prudhomme, must be a happy but nervous man at the moment