Photo Special and Interviews: Last Friday both of the new CCC sponsored teams had their presentation and media day in the Valencian region of Spain. First up was the women’s CCC-Liv woman’s team who were available for photos and chat in the morning in the Hotel Port Dénia. 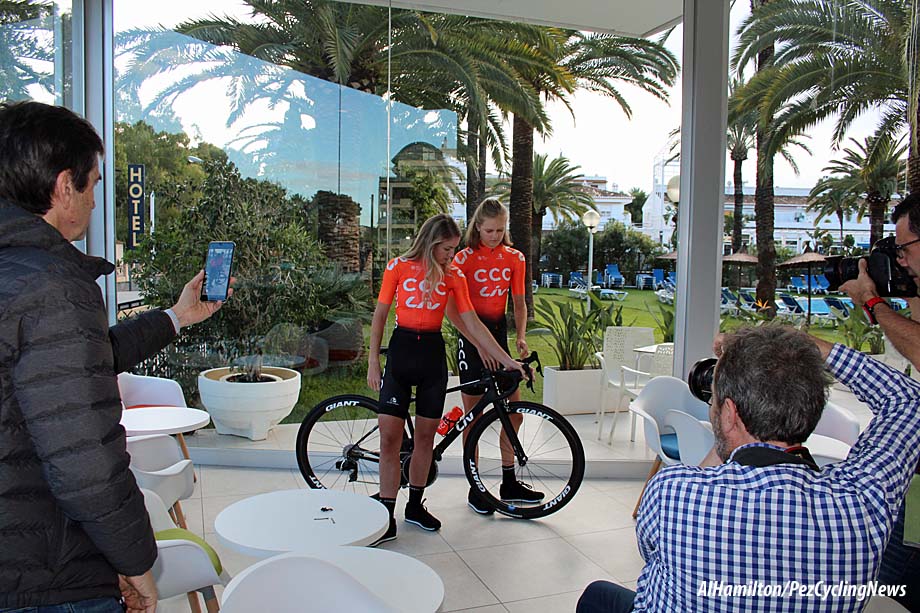 It was an early start with road works in Dénia to slow the arrival, but at 10am sharp all the riders were ready for an informal affair of interviews and photos. Of the eleven riders on the team roster we caught up with Marianne Vos, Riejanne Markus, Inge Van Der Heijden, Evy Kuijpers, Valérie Demay, Pauliena Rooijakkers, Ashleigh Moolman-Pasio and Jeanne Korevaar to find out a bit more about them, the team and what they hope for from the 2019 season. 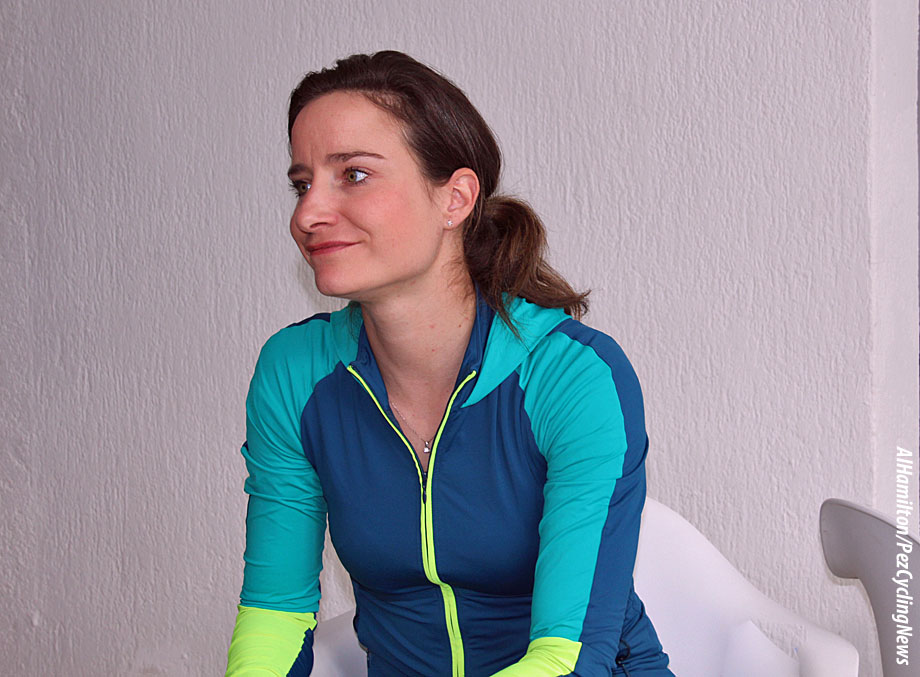 What are you looking forward to next season? Marianne Vos: “It’s always interesting looking ahead to the season, everything is new, new riders, new kit, new bike. I was just counting; it’s my fourteenth season, but it doesn’t feel like it and can’t even imagine where the time went, it’s been so fast.”

How is your form now? “Yeah, I feel good. I had the first part of the cyclocross season and now I’m planning for the second, the pinnacle will be the World championships. Then I’ll take a little break before making the switch, training for road and heading into the Spring Classics in March and April. The biggest goal, it sounds weird but, to get my best. In the second part of 2018 I got to a consistent high level, so to build on that is the biggest goal. 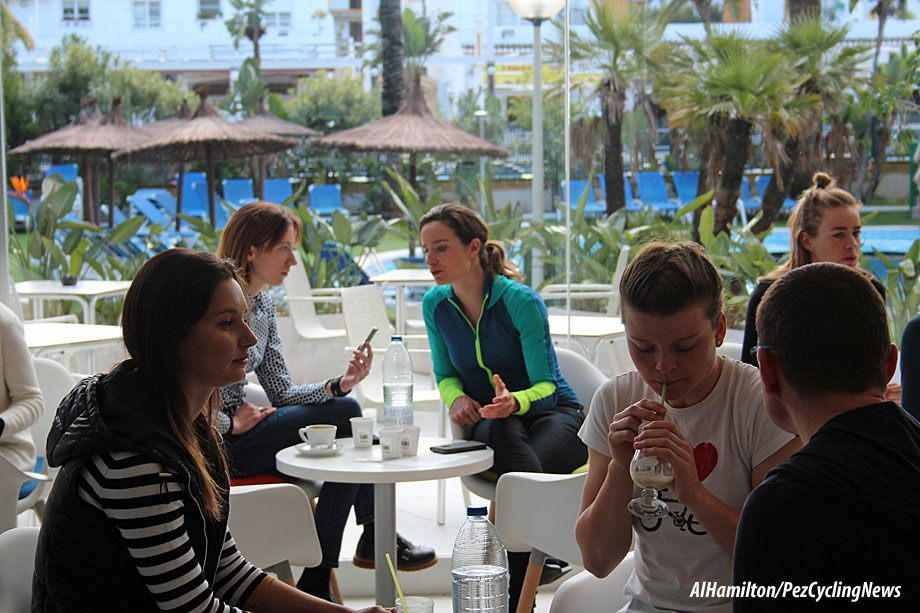 Physically are things back to normal? “Yes, I feel good and I recover well and the training goes well. I mean it’s still sport, so anything can happen. I think the biggest win of the season was to have the bigger base that I have been working on over the last years. To get to that level took time.” 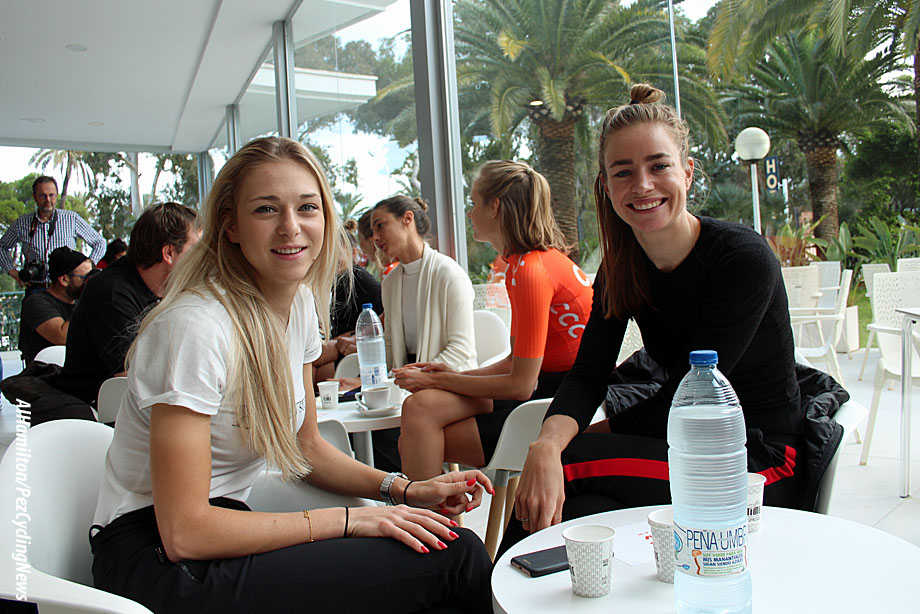 What are your hopes for next season? Riejanne: “To do well in some races again, like the Amstel Gold race, the Nationals and the Giro, for example. I’m looking forward to the hard races next year.”
Inge: “For me it’s cyclocross for the next few months.”

Has there been big changes in the team or is it just a new sponsor? “I think it’s much the same.” 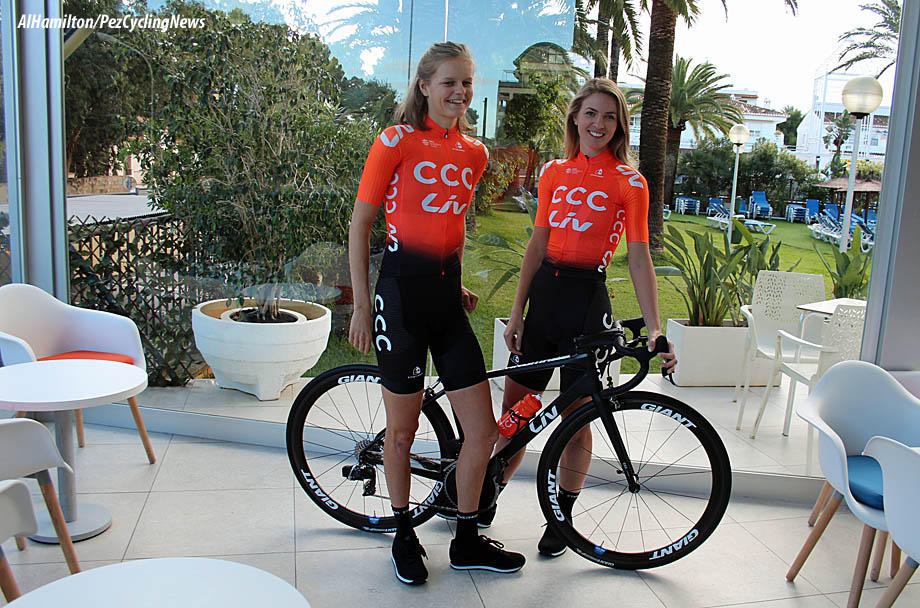 Do you get a good discount on Shoes? Riejanne: “Yeah! But it’s nice to have a good sponsor, be also have five new girls and I think everyone fits together and the sponsor is a good fit for us, which is really important as a rider.” 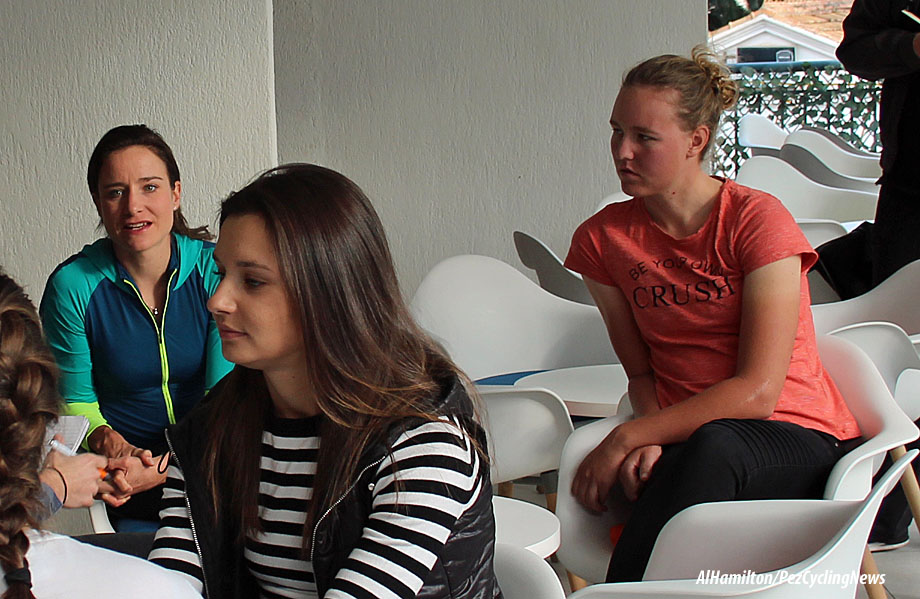 Evy Kuijpers: “This is my first year with the team and, well, it’s a whole new experience… a good experience.”

How has the training camp gone? “We’ve had five good training days, then yesterday we had the photo shoot and today the press day.”

The 2019 season? “I’m really looking forward to the Classics; I like the Tour of Flanders and Het Nieuwsblad, so hopefully I will be in the team for them.” 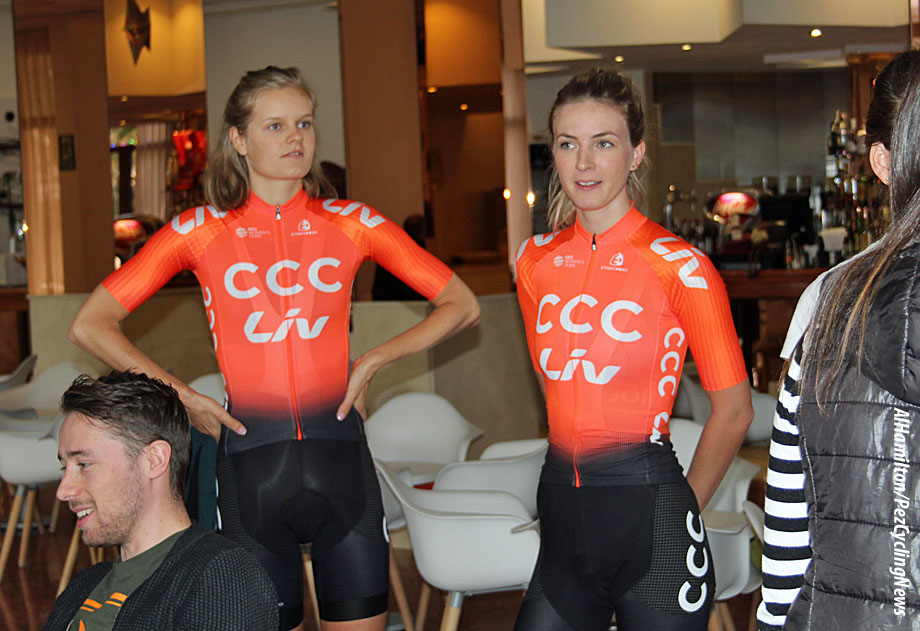 And the future? “I don’t know, I have to finish my school, which is also an important thing, and then hopefully I’ll be a professional cyclist, more than anything else.

You’re based in Holland? “Yeah, I’m still living with my parents.”

Girona one day? “No not yet, but the weather is always good here, in Holland now it’s freezing cold!” 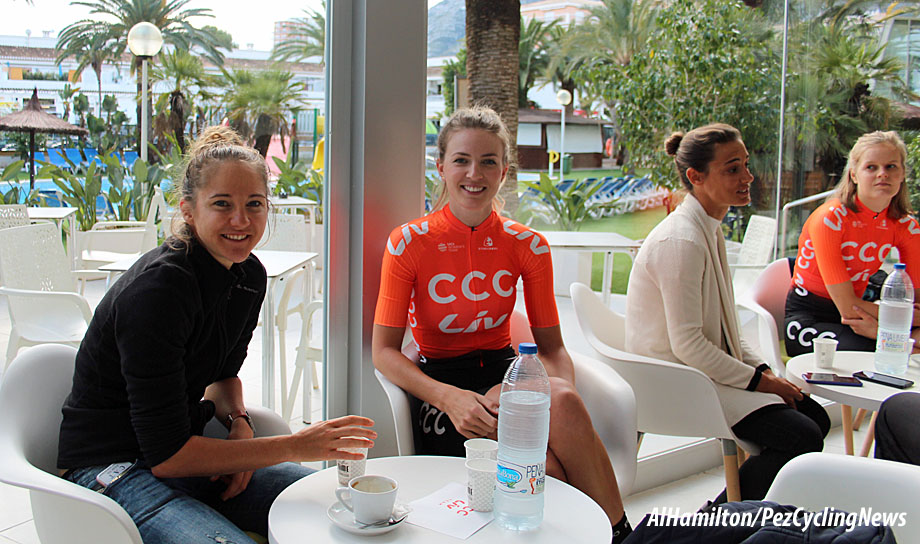 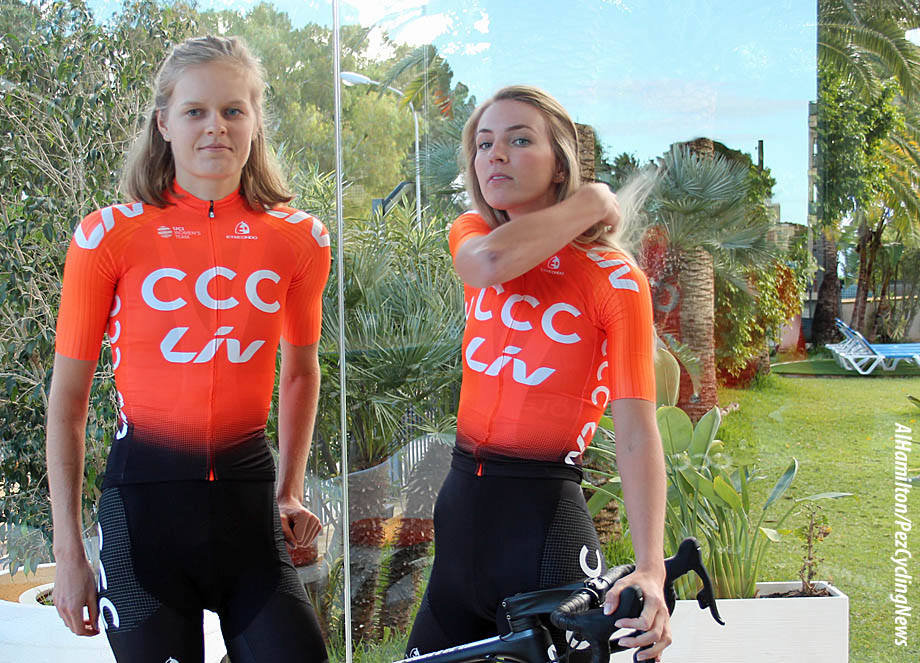 What will be your high point, Pauliena: “We have a lot of high points next year with the team, but for me I like the races with long climbs, so that will be my high point. 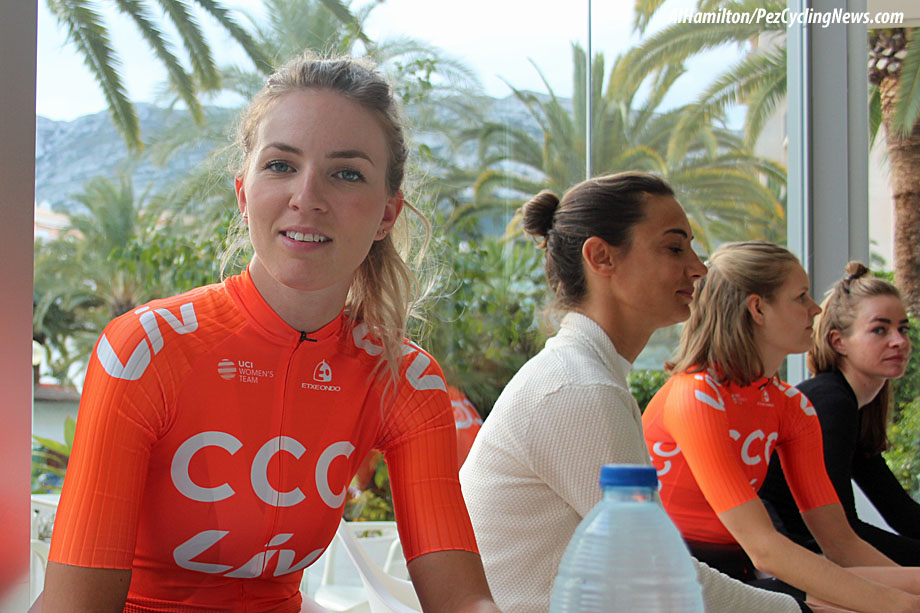 Has the team changed much? Pauliena: “It’s mostly the same people around us, which is really good, it feels safe.” 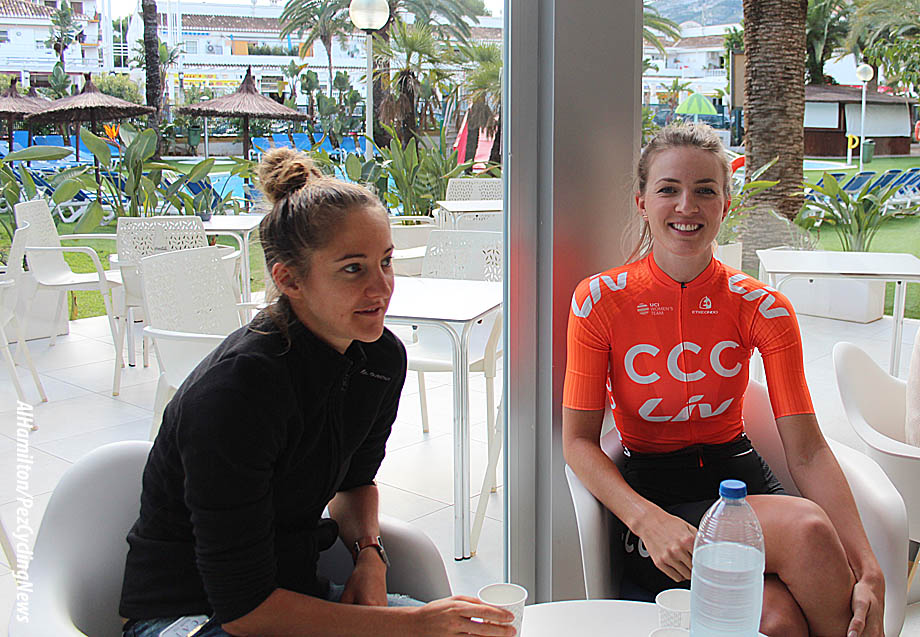 How long are you here in Spain for? “We fly back to Holland on Monday morning. The weather is better here than in Holland, there it’s only 2 degrees at the moment.” 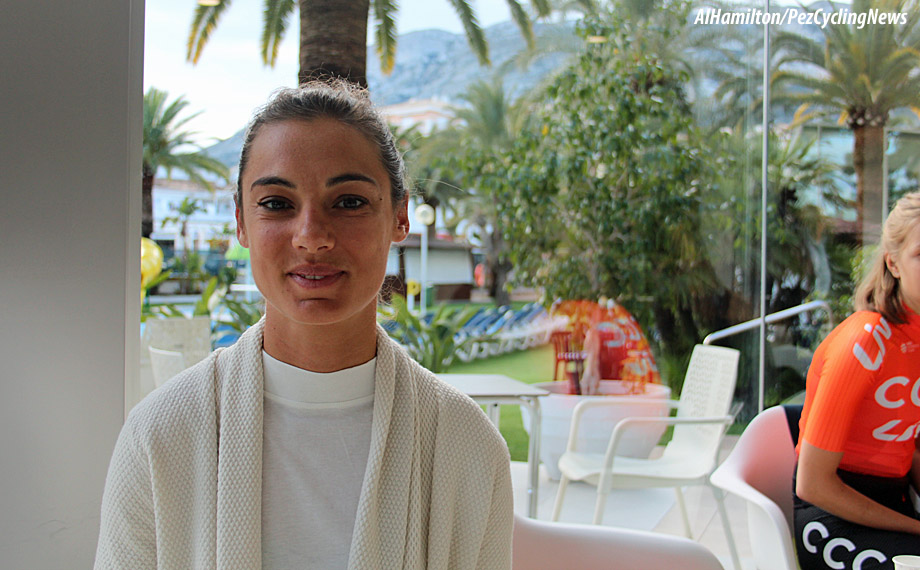 What are your big hopes for 2019? Ashleigh Moolman-Pasio: “I suppose next year will be like previous year; the Spring Classics will be an important period for me, of course the most important for me will be the Ardennes Classics. La Flèche Wallonne is my favourite race and I would really like to win it, I’ve come very close, but never been on the top step, so that will be a big goal in the first part of the season. In general just a strong Spring Classics campaign. We have just had the announcement that the Giro will have a mountain top finish on the Gavia, so I would like to target that and go for the win there as well. Then there is the later part of the season; obviously the World championships, but as a South African it’s difficult for me to specifically target as I don’t have team support, but there is always good racing at that time of year with the GP de Plouay and Boels rental, a Tour which I’ve never taken part in before. Now being part of this team I’m really looking forward to having the opportunity to race there. 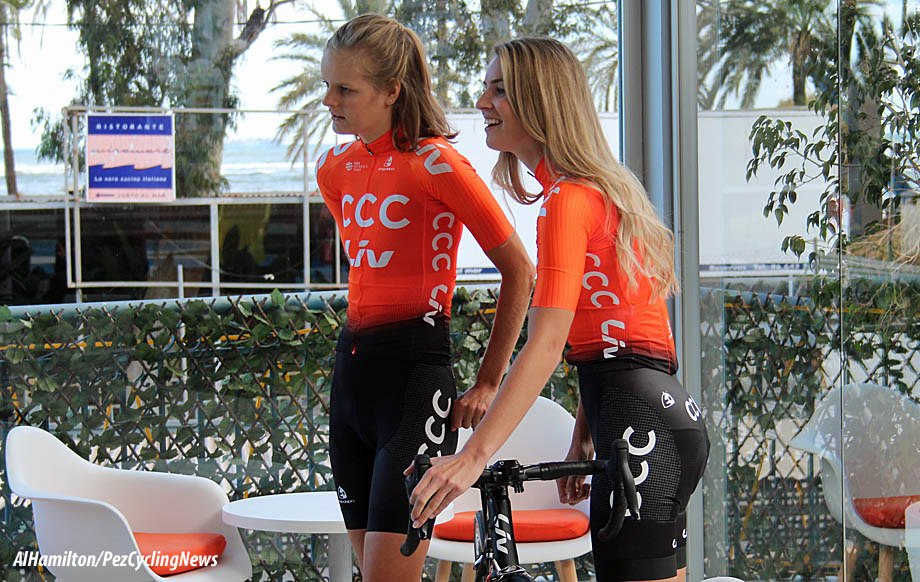 How have you found the team? “So far a really good experience. From the very beginning I’ve been really impressed by the team and the professionalism and the way everything is handled. This is the first pre-season camp I’ve ever been on. With all my previous teams the first training camp has been in February, so to have the first camp in December and break the ice with the riders and meet the sponsors and get the new equipment. Not only that, but to get all the extra bits and pieces shows how professional the team is. The intension of the team is to be one of the best in the peloton, so far I’m really happy and I think the vibe amongst the girls is really great.” 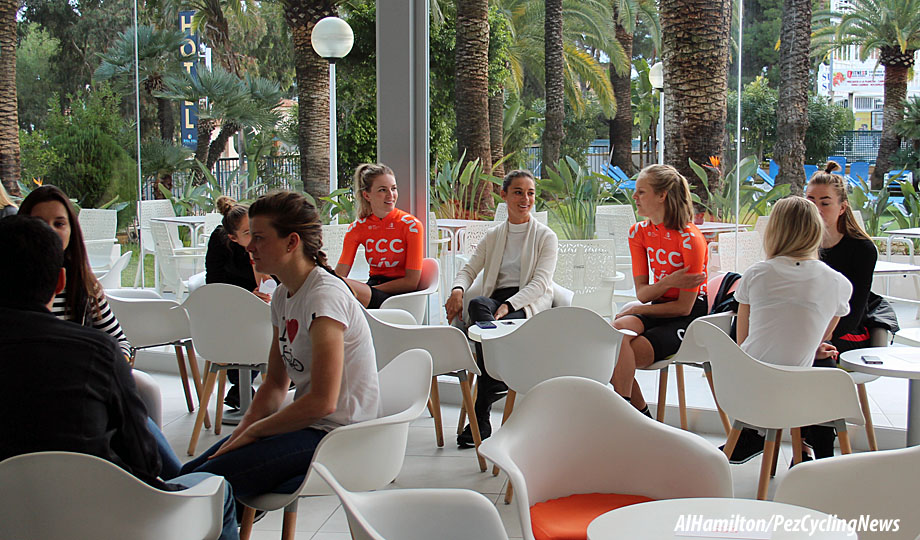 Will you go back to South Africa over the winter? “Actually I’m not going back to South Africa. I’ve been there for two weeks in November, usually in previous years I would be in South Africa from the end of October until February, but this year my husband and I and the family bought a property here in Spain, near Girona. It’s quite a big property, a country villa, and we are running a cycling tourism and a general hospitality business from the property. So now it mean our home is more in Europe and our life in Europe, so it means we are spending more time here.”

Do you think you will stay in Spain in the future? “Right now I think Spain will be my home for at least the next ten years and we will try to make a success of the business we have invested in. My husband and I have been based in the Girona area for the past seven years and we really like it there. It’s the best place to be when your focus is on cycling. South Africa will always be my home country and I still have family there and I still have a big connection with the country, but the cycling is not as safe in South Africa, so it makes sense to be in Spain. Both my husband and I have engineering degrees, but our experience is in cycling now and so it made sense to purchase our property as it connects well with my professional cycling career.” 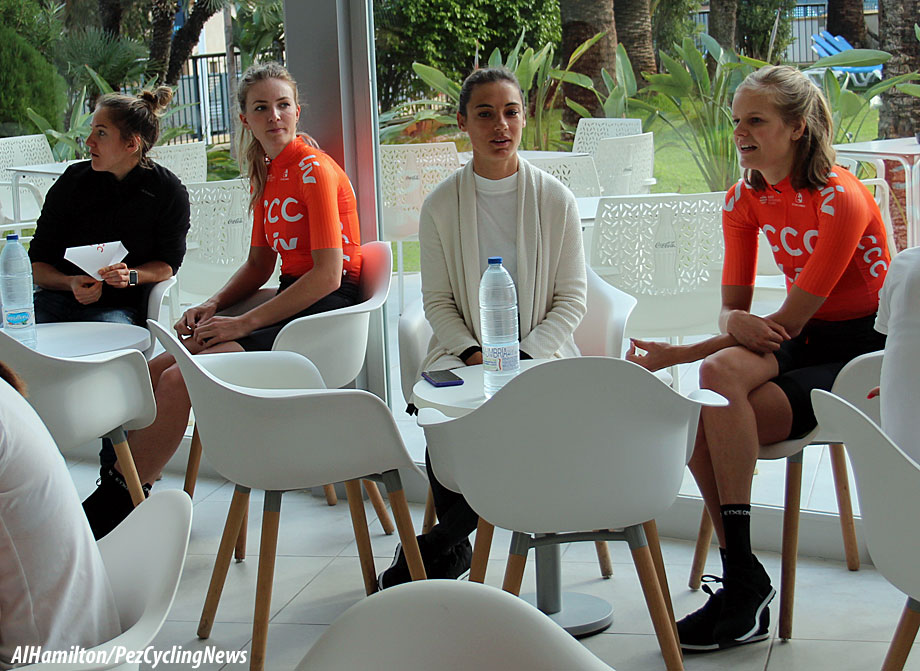 Training in South Africa would be better at this time of year? “Of course it’s summer there, but I find even in the winter here the training is more enjoyable and productive. In South Africa you have to have to always consider road safety. As a woman I can’t ride on my own for safety. I always enjoy being in South Africa, usually I spend more time on the mountain bike, it’s safer to be on the mountain bike. So far we have been lucky with the weather in Girona and I will be joining the team in Australia in January for more good weather and then I’ll go back to South Africa for the Nationals.”

What do you think of the new kit? “Yeah, I really like it. I was a bit nervous at first when I saw that CCC was the sponsor, I had visions of all orange and that wasn’t something I was excited about, but I think it’s really stylish; the black fading into the orange, and it’s a nice colour of orange.”

CCC shoes, are they nice?
“Yep, I’m wearing some!” 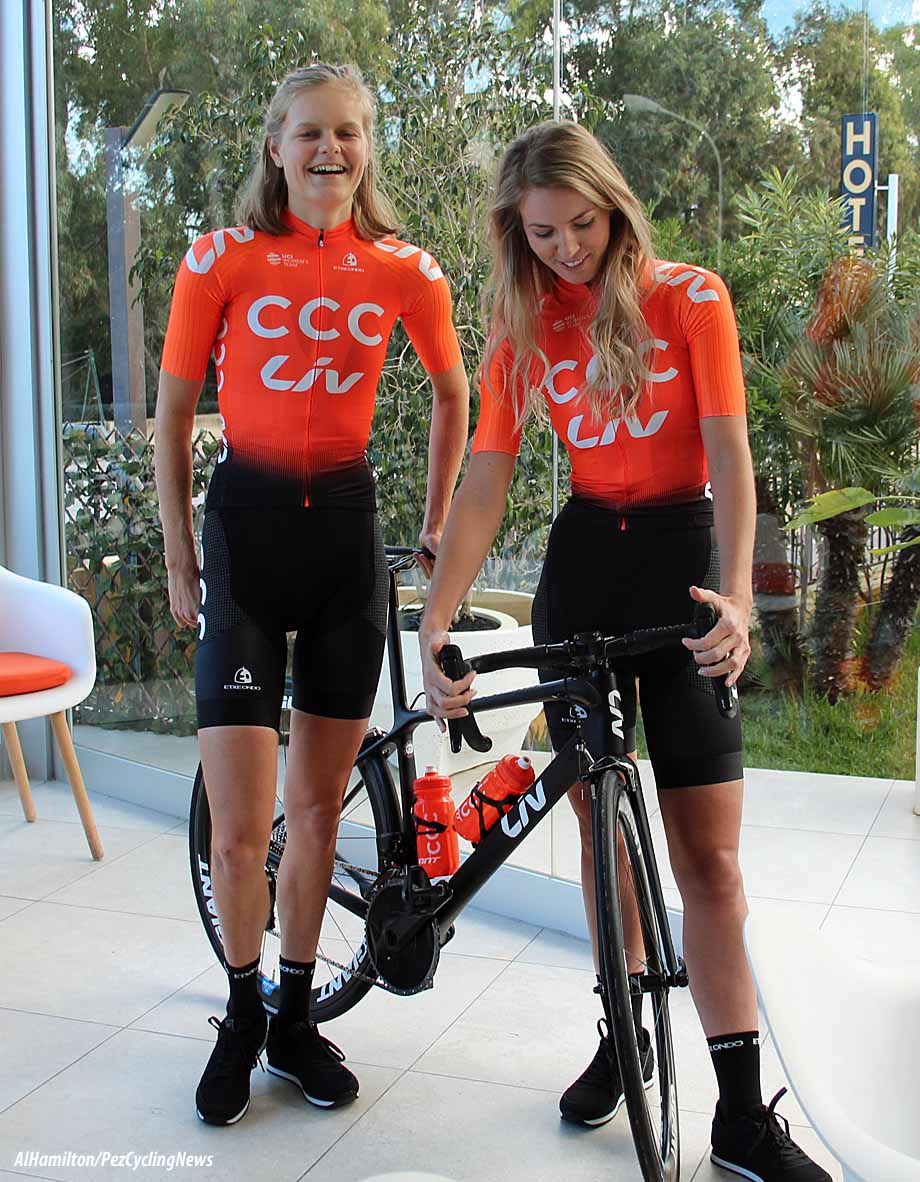 Jeanne Korevaar: “I am happy here and I feel that I can still learn from others. I continuously achieved a high level last season and I have been of value to my teammates. At the end, I sampled for the first time the taste of winning. With this delicious aftertaste from the success in Belgium, I went into the winter. I want to be at the top of the game more often in 2019 and gradually advance to an established name.” 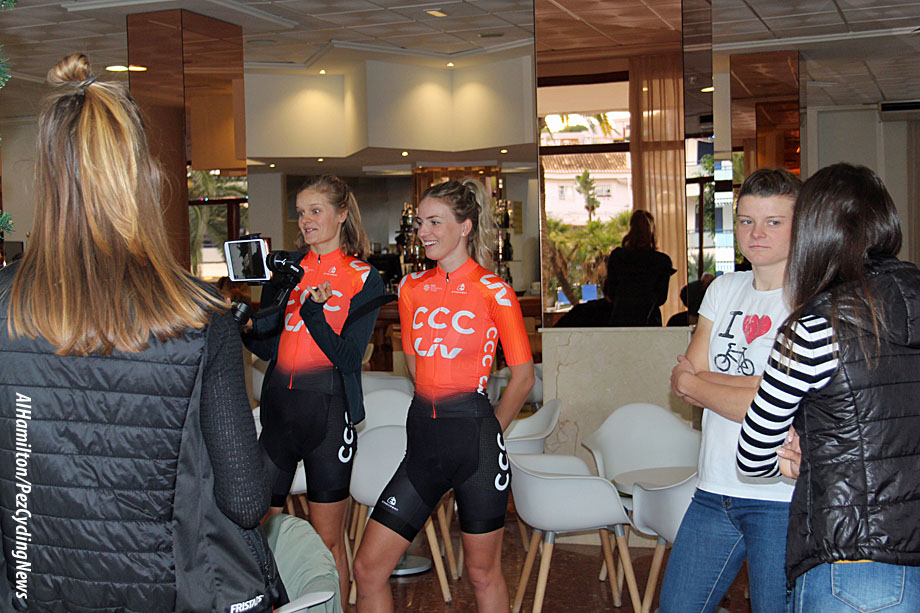 Next up was the men’s CCC team presentation in La Sella Golf Resort up the road, but no photos could be shown of the team riders in their new kit before the 1st of January 2019. Interviews with Greg Van Avermaet, Patrick Bevin and Joey Rosskopf coming soon.