Sprint King Cav Is Back With Dubai Win!

PeloPics:Team Dimension Data for Qhubeka’s Mark Cavendish produced a magnificent sprint to win stage 3 of the Dubai Tour. Nacer Bouhanni (Cofidis) finished in 2nd place and Marcel Kittel (Katusha-Alpecin) had to be content with 3rd.

Stage 3 of the Dubai Tour was yet again another sprint fest, with the fastest riders in the world going full tilt for the line in Fujairah. Mark Cavendish proved he was the fastest of them all, with an impressive acceleration over the last 200 meters of the 180km stage, securing the stage victory for the African Team. 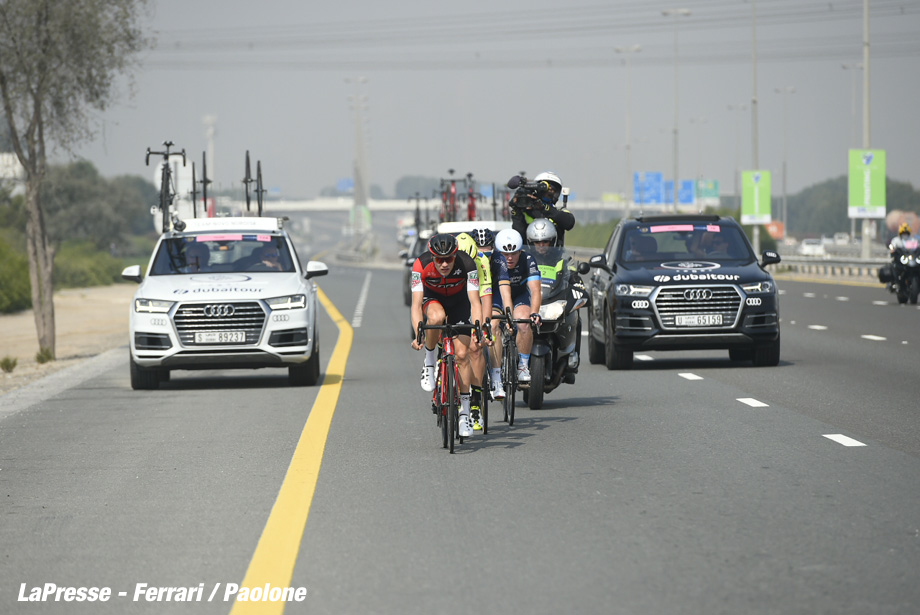 Break of the day on the road to Fujairah

It was a steady build up to the sprint finale once again, with a 4-rider early break going clear by 7-minutes. Some blustery wind conditions resulted in a bit of action from the peloton, the main group splitting in two. This increased tempo saw the escapees caught in no time. As the wind died down though, so did the overall pace of the race and the peloton regrouped for the final 60km. 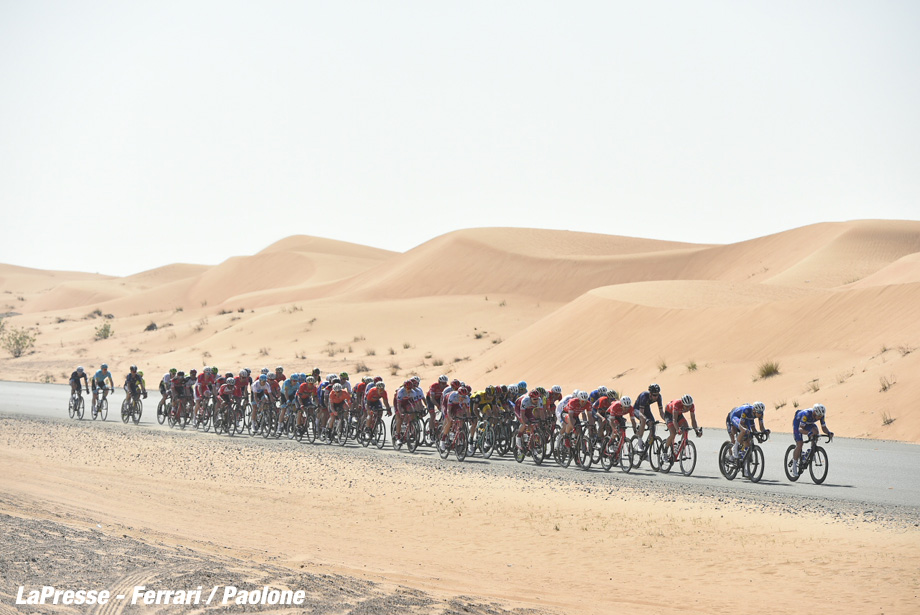 Sand and desert roads in Dubai

Team Dimension Data made its presence felt for the final run-in to town with Mekseb Debesay and Amanuel Ghebreigzabhier doing some good pace setting at the head of the race. Coming into the last 8km, each African Team member played their part to keep Cavendish positioned at the sharp end of the race. One-by-one, Jay Thomson, Julien Vermote, Bernie Eisel and Mark Renshaw peeled off when their jobs where done, leaving Cavendish to negotiate the final 800m. 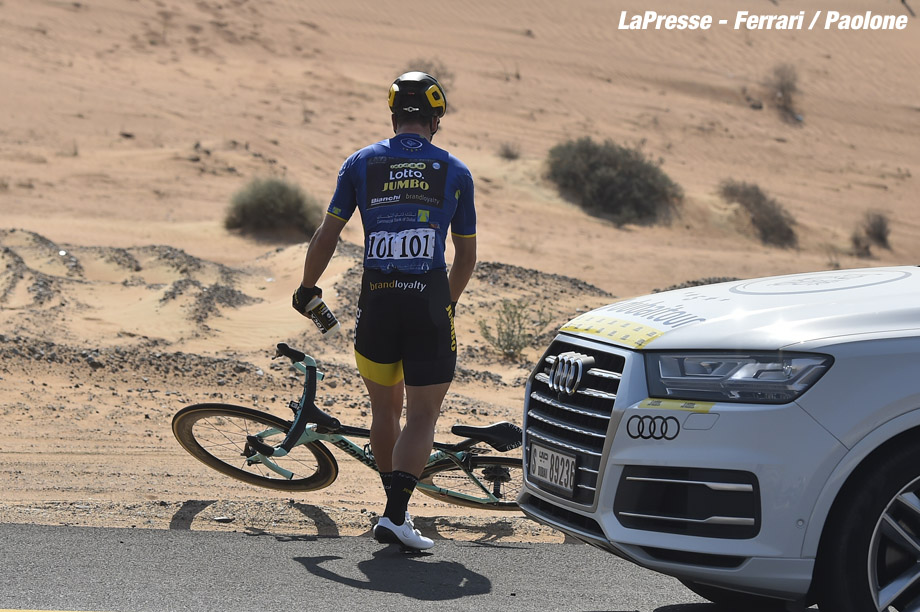 The Manxman craftily moved up onto the wheel of Sonny Colbrelli (Bahrain-Merida), waited for the right moment, and launched his sprint to come over the top of the Italian and his countryman, Elia Viviani (Quick-Step Floors) in the final 200 meters of the stage. Bouhanni and Kittel could only follow in Cavendish’s wake, as he took his first win of the 2018 season. 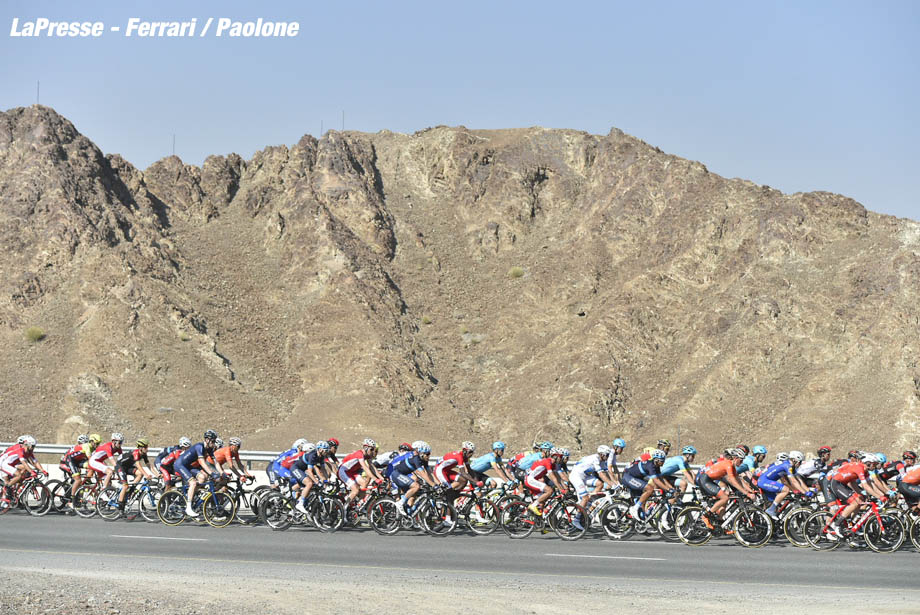 It’s not all flat desert in Dubai 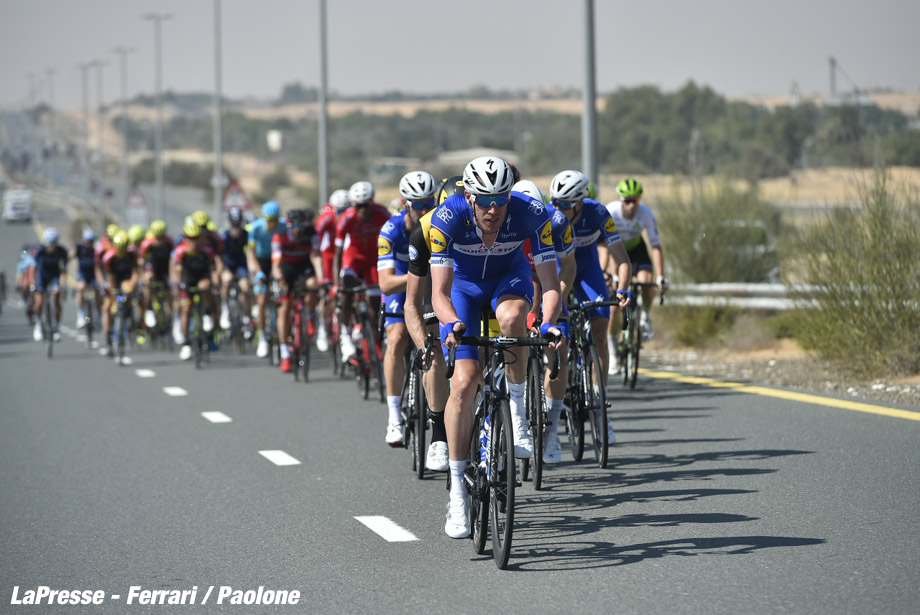 The Quick-Step Floors team were working hard for Elia Viviani 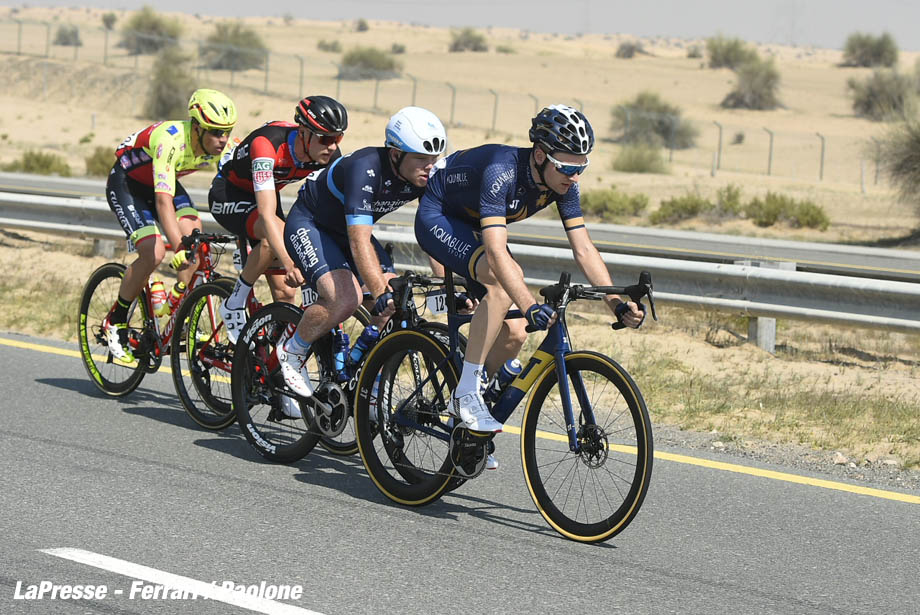 No luck for the break 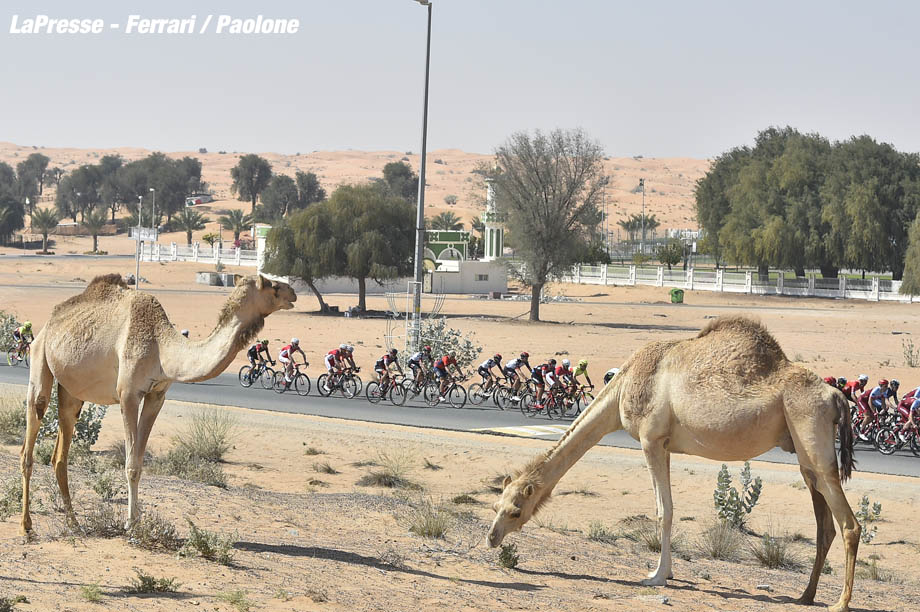 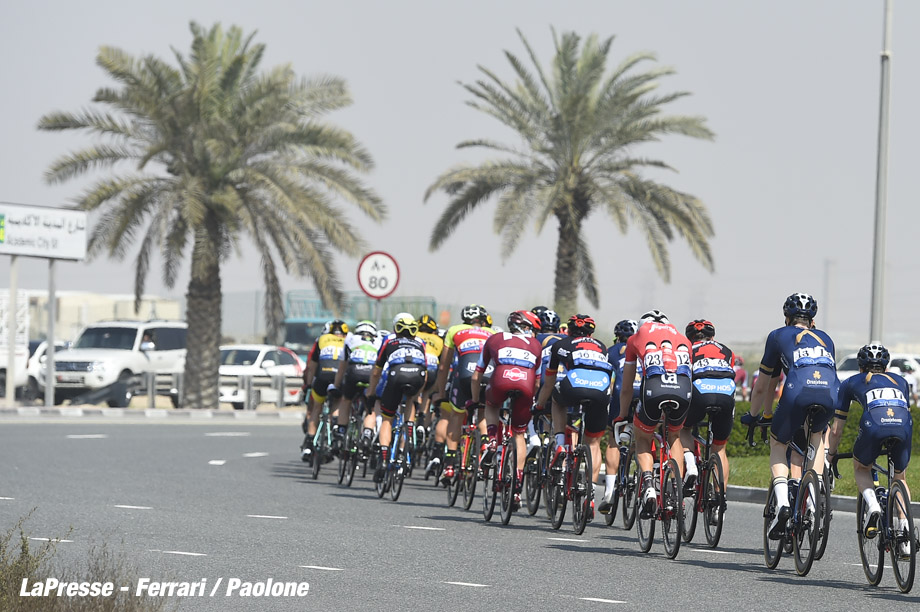 The peloton takes the final bend 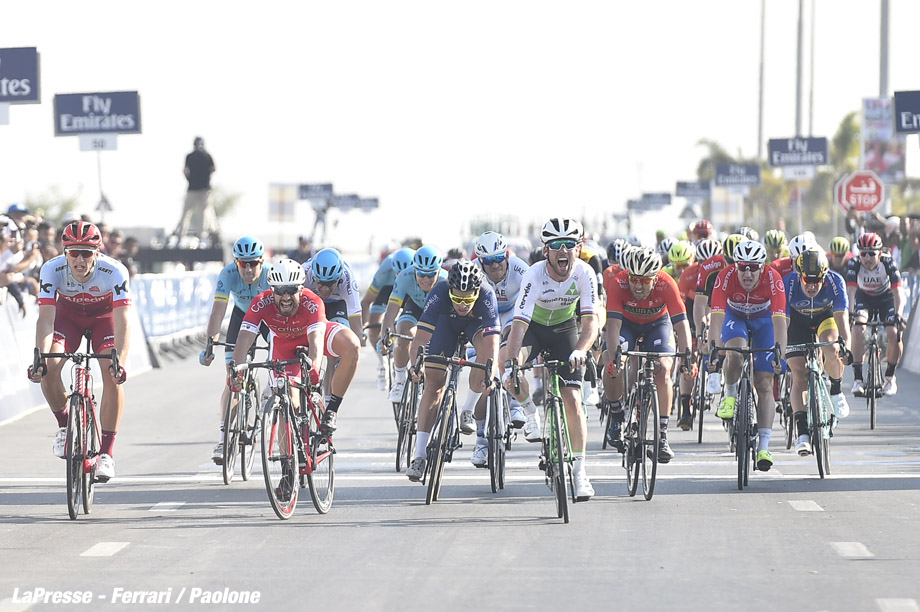 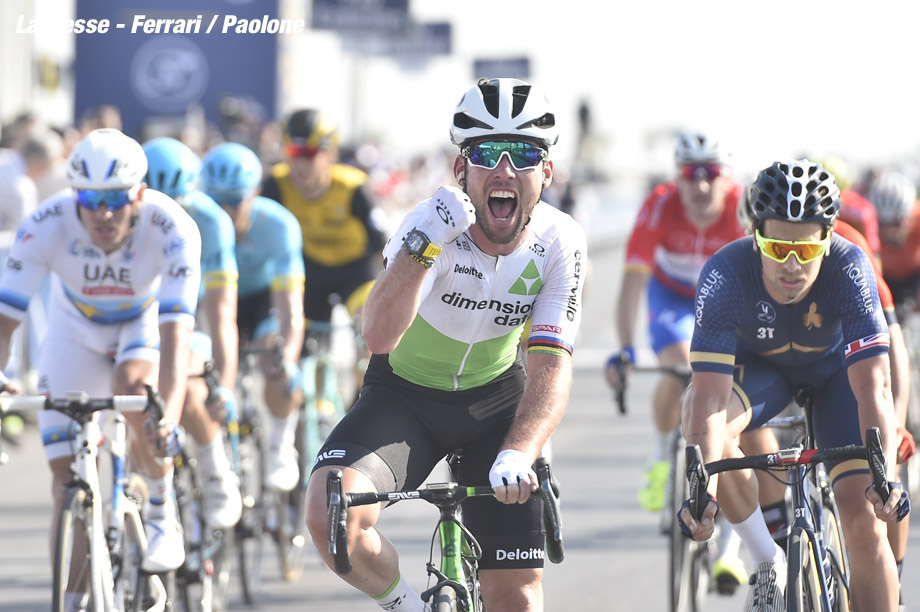 Cavendish pleased with his much needed win 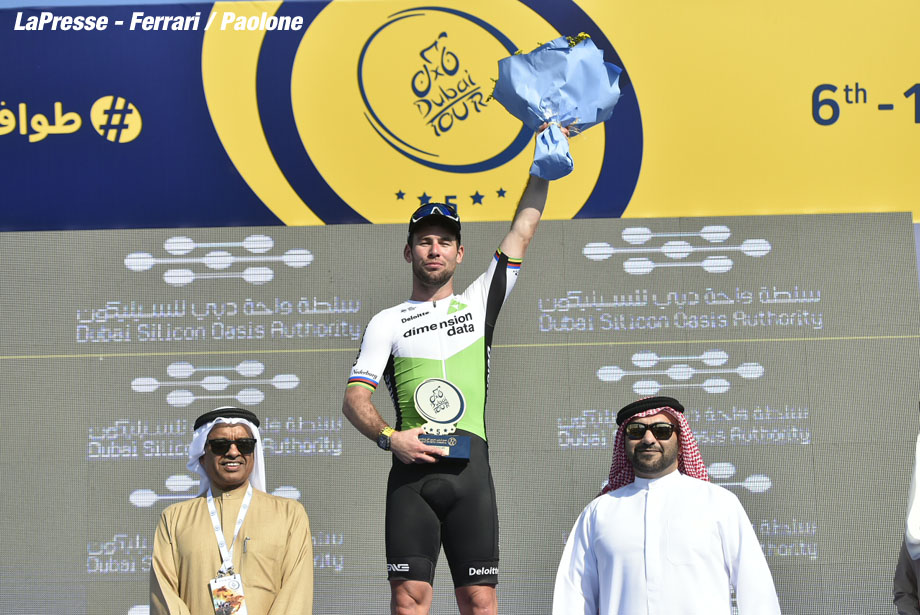 Cavendish on the stage winner’s podium

The stage winner Mark Cavendish said in the press conference: “I’m just a bit angry that I sat up yesterday. Technically I could have had the leader’s jersey. I apologize to my teammates for that. They did a great job today. Bernie (Eisel), (Mark) Renshaw and I finished the job in the last 3km. I still feel the consequences of my Tour de France crash in my body. It will remain for the rest of my life. Quick-Step, Cofidis and LottoNL-Jumbo all look good. There are so many good teams for sprinting here. I’m nowhere near the form I had in July but I’m happy with my form now.” 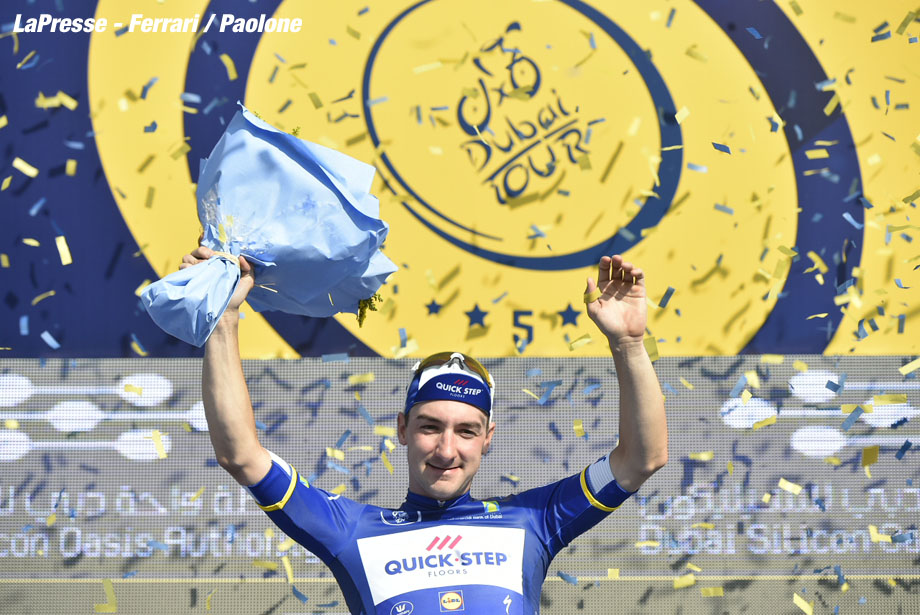 The race leader Elia Viviani said: “I got a perfect lead out again but it’s hard to lead with such a headwind. I’m not happy with my result but I’ll try to defend the Blue Jersey. The main contender for GC will be the first sprinter tomorrow. I’m disappointed I didn’t take a time bonus today but I sprinted for the win. Tomorrow’s finish is steep but a good position at the bottom would help to defend the jersey. It won’t be about lead-out this time.” 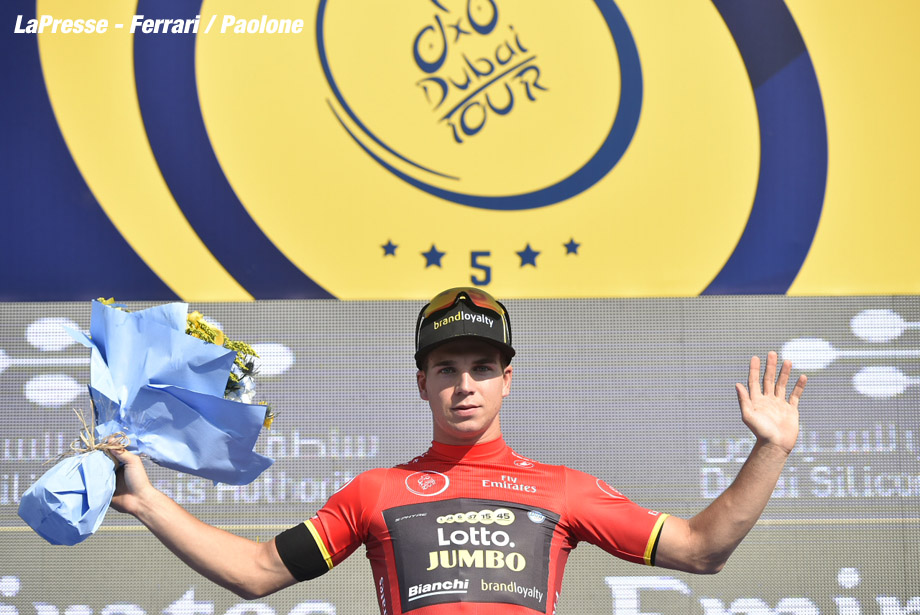 20 second penalty for Dylan Groenewegen, but still in the points leader’s jersey

The 2018 Gravel And Tar Classic