Photo Gallery: Race three in Heather’s Italian autumn one-day Classics week, and she has moved north to Varese for the ‘Tre Valli Varesine’. A surprising and exciting finalé was taken by Vuelta a España winner, Primoz Roglic and Heather was there for the full Italian race experience.

You can see Heather’s day at the Giro dell’Emilia’19 HERE and the GP Bruno Beghelli HERE. 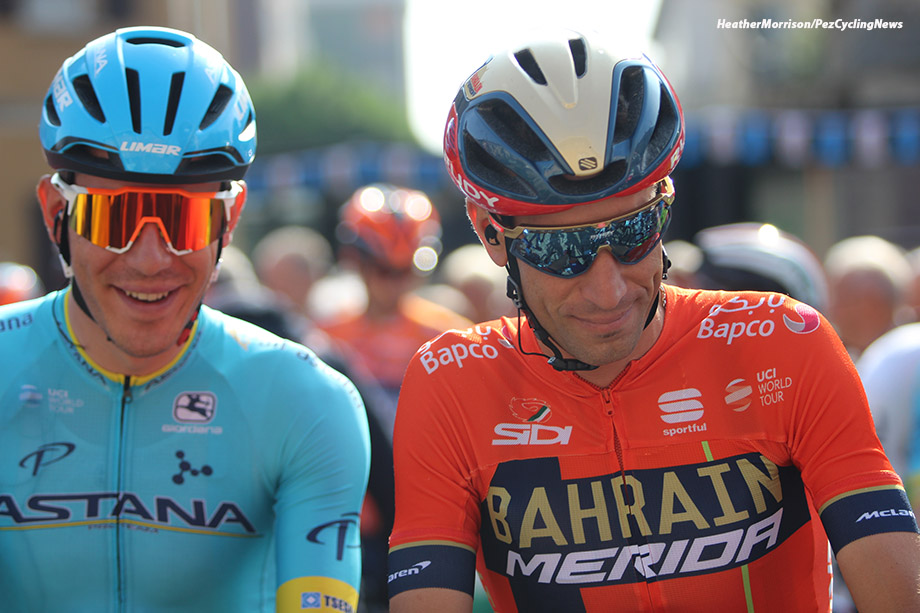 Ballerini with Nibali ready to go 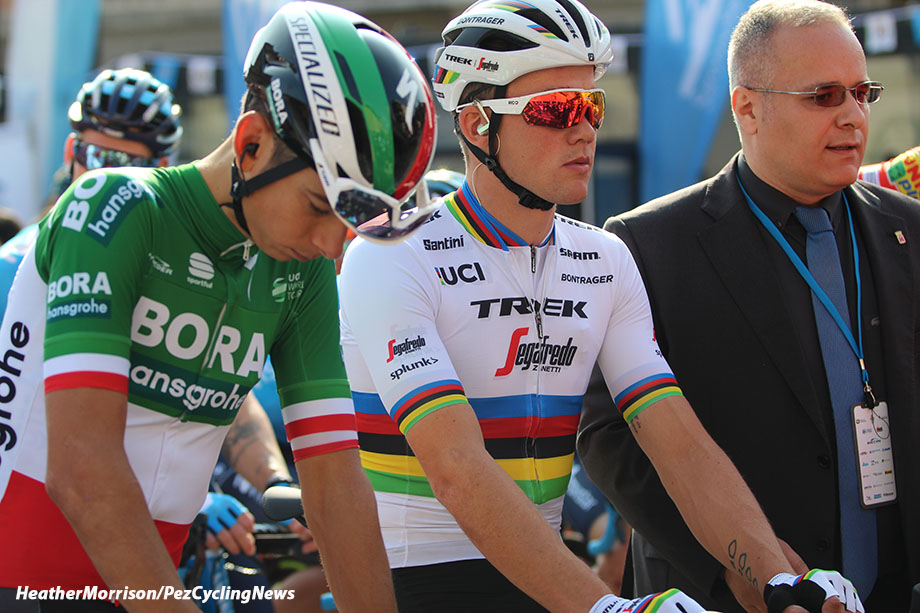 As close to the front as I could get

So this morning started well. I got up on time, I don’t really do hotel living and miss that I can’t just make a cup of tea. But can I just say yesterday’s transition day had its moments? Went to Saronno for the accreditations and managed to find something to fix my camera harness with, also got additional SD card, and an expensive belt… I’d forgotten a belt! 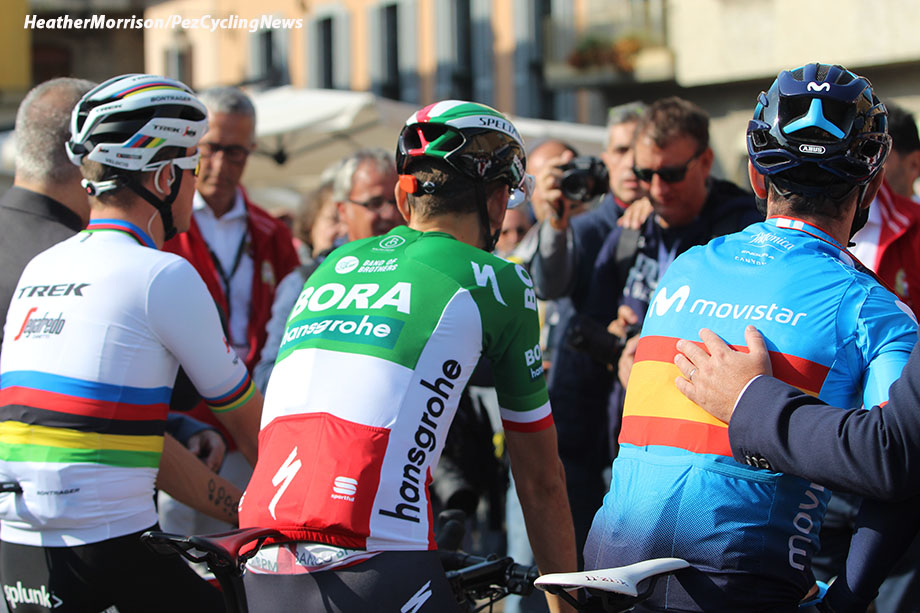 As close as I could get – everyone Mads for the rainbows 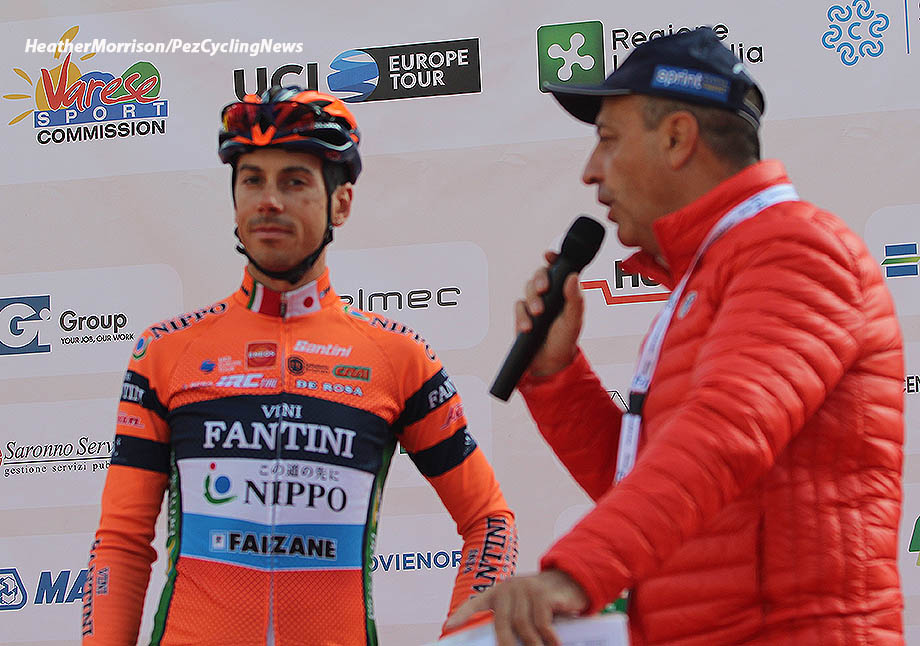 Canola always a favourite with the crowd

Today I got away on time, and managed to get to the sign-on, the sun was all wrong but hey – everyone is here. Visconti and Colbrelli will truly be beginning to feel stalked. Poor Mads Pedersen must have been terrified with the attention, not from professionals but from every man and his dog… Yes there were dogs. 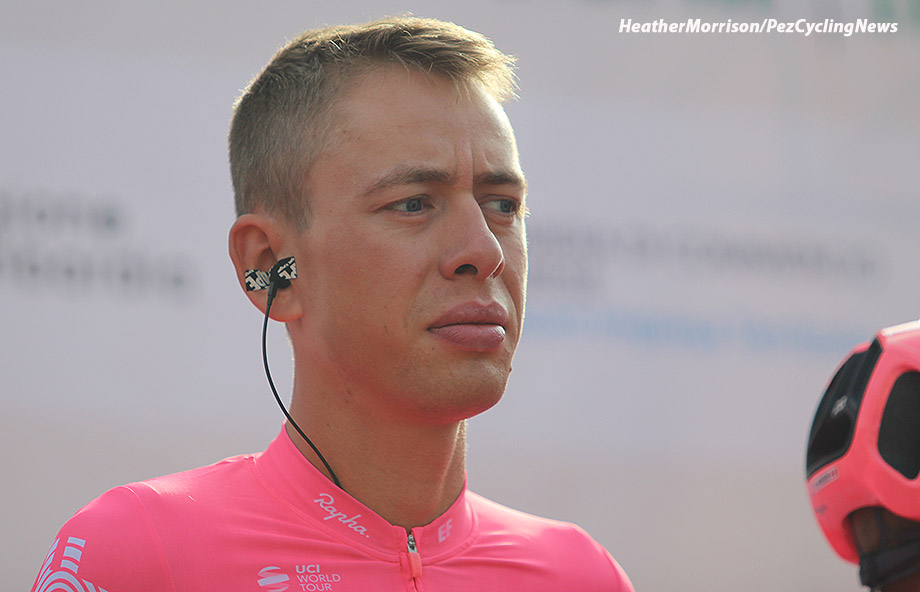 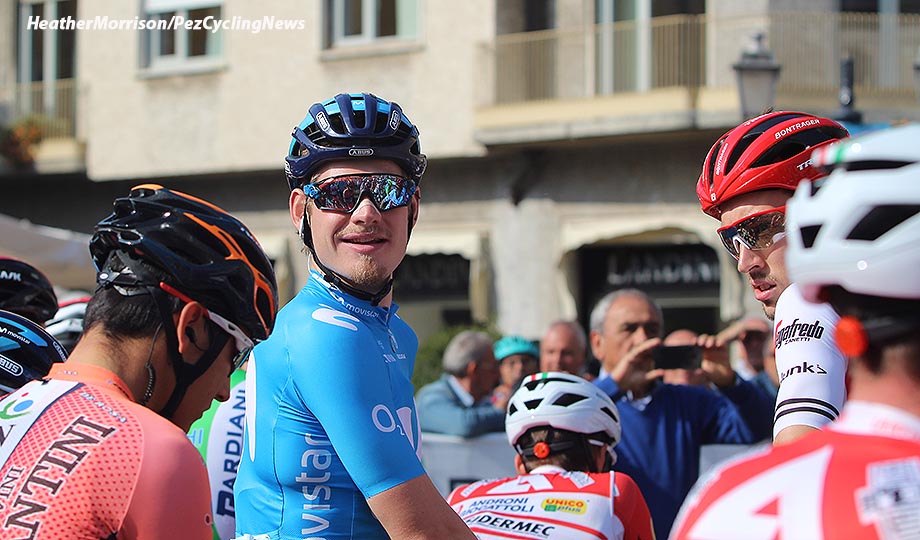 The race set off and before you knew it they soon returned for the finishing local circuits. Every circuit I could see Visconti taking a better position, with Nibali on his wheel. I really thought Ballerini had it in the bag and then he seemed to just blow. 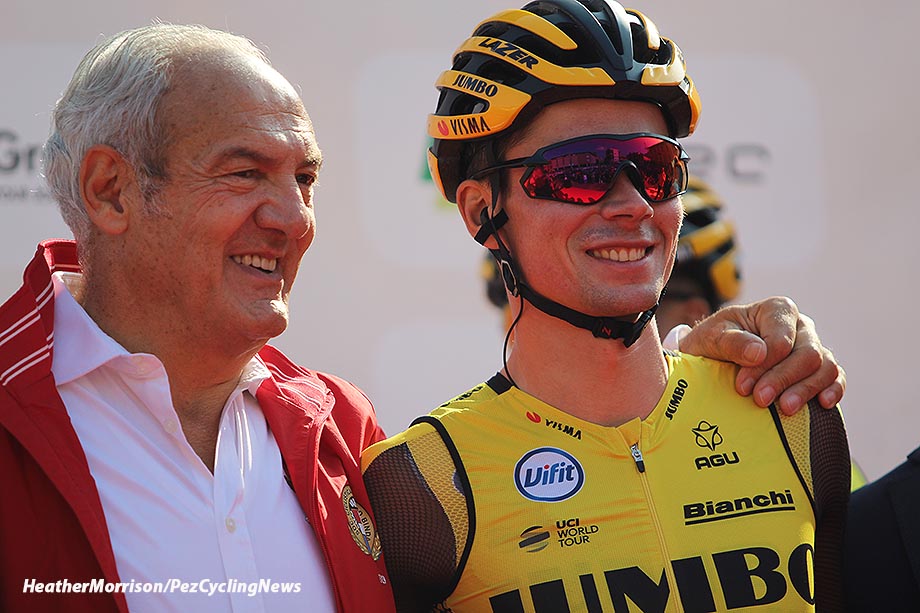 Before this week I’d only ever covered WorldTour RCS races in Italy, so I’ve been surprised every day by the people who get to hang around, I know I’ve jumped through hoops to get accreditation, and here are people who have brought their dog? So it is very busy with people who don’t stand still for 2 seconds… so that is todays moan. 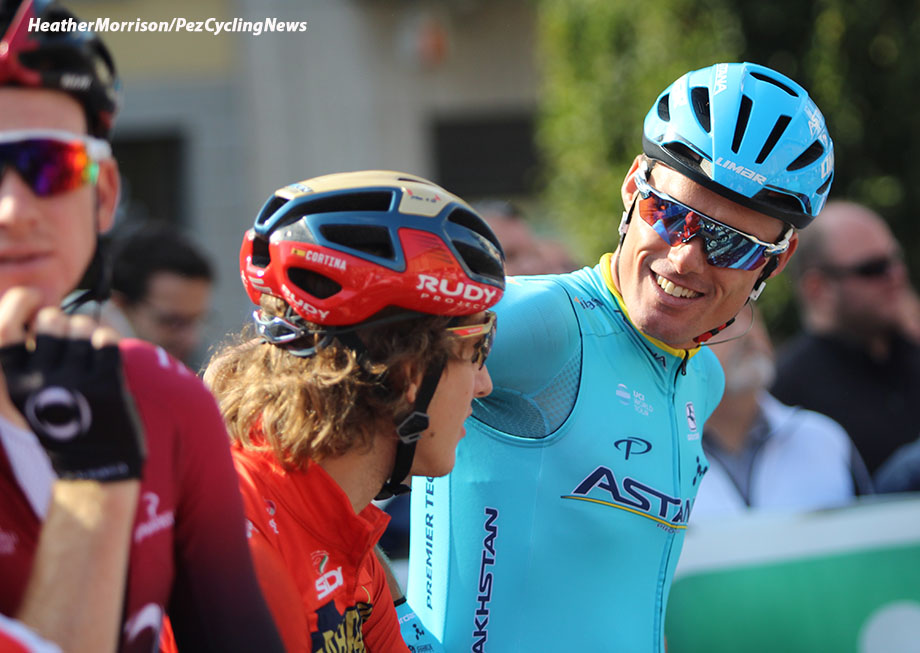 Sanchez and Cortina at the start 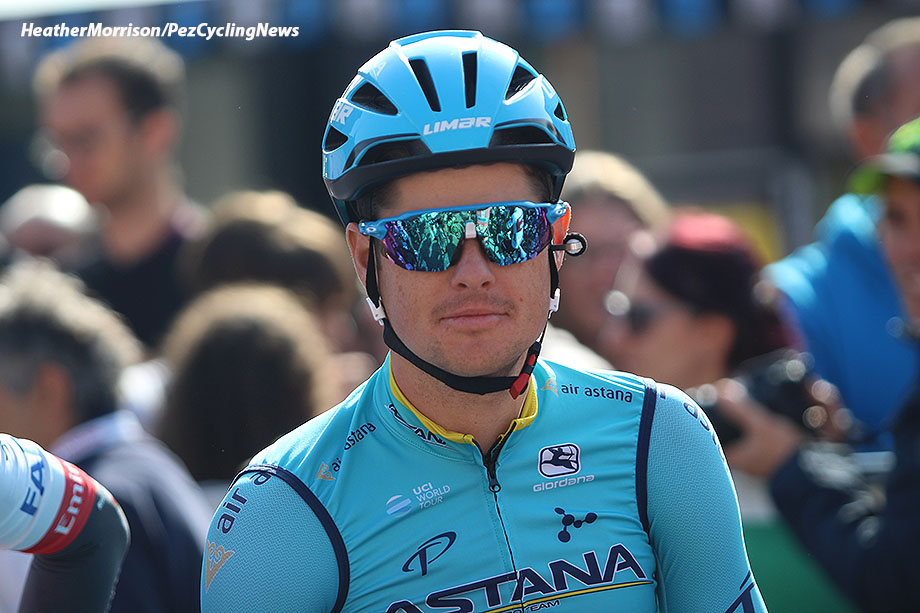 Birdie with a nice smile, understanding my frustration at trying to get into the melee around the rainbow jersey

At the sign-on it was very busy, and a lot of low sun, if I can rescue any pics it will be down to our editor… Sonny was all smiles again and I grabbed a good pick of him with the hero of the lead-outs Ivan Garcia Cortina – a new favourite. 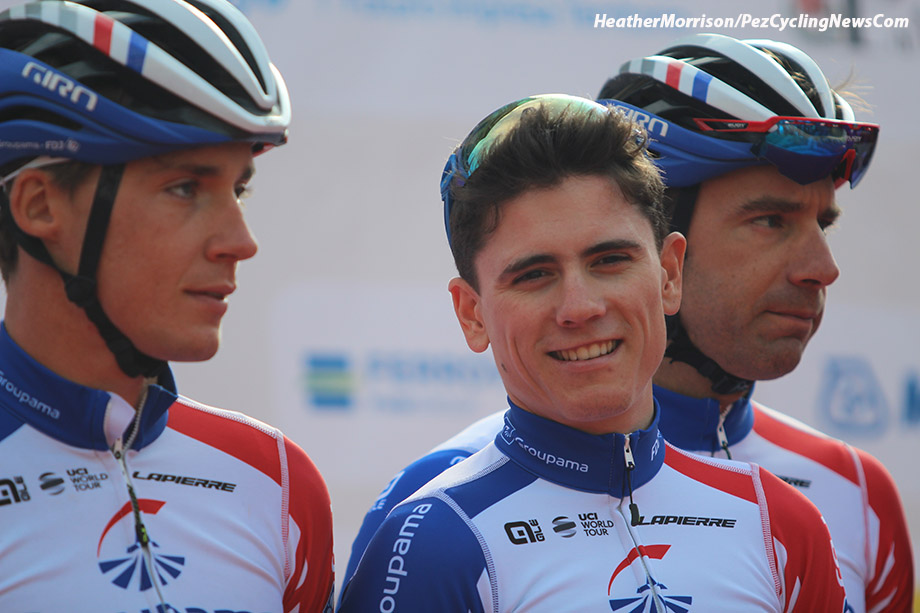 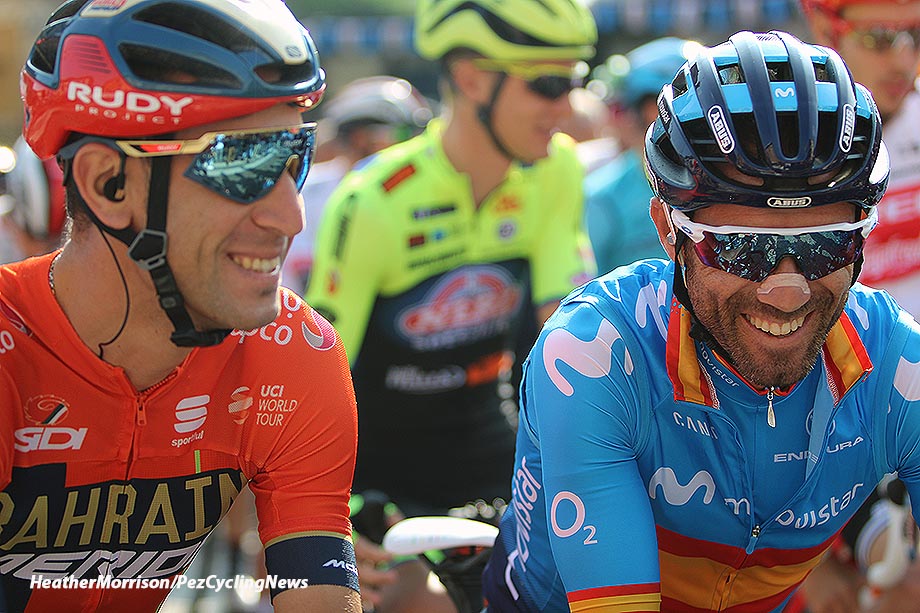 Nibali and Valverde before the race

Overall the sign-on went off without a hitch, but at the actual start Pedersen had a gauntlet to run, the fans were also wanting Valverde and Formolo, someone also hunted out Nibali to get him in the pic, but it was impossible to get near… so I took one of their backs. 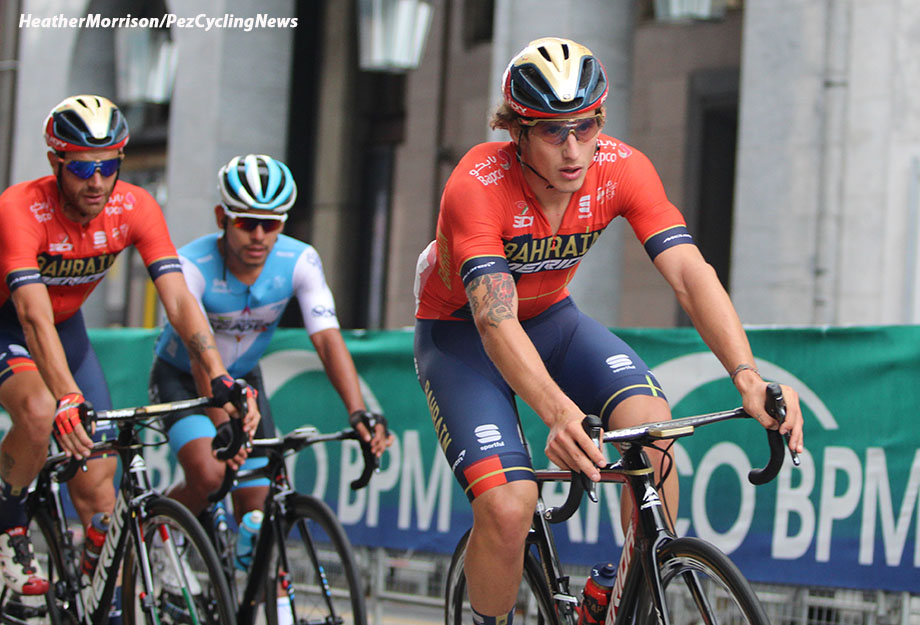 Star of the future – Cortina

The race went quickly, I hadn’t appreciated how close the circuits were. I had actually considered asking if anyone was going out to the circuit… they were outside the window! It was a good idea to go down to the street and got a few photos from a different angle, at the second to last lap I moved back to the finish. Oh my god! I’ve never seen so many non photographers on a finish line, there were families… I though to myself; if Elena was here – she would be reading the riot act, she controls the line for RSC races. 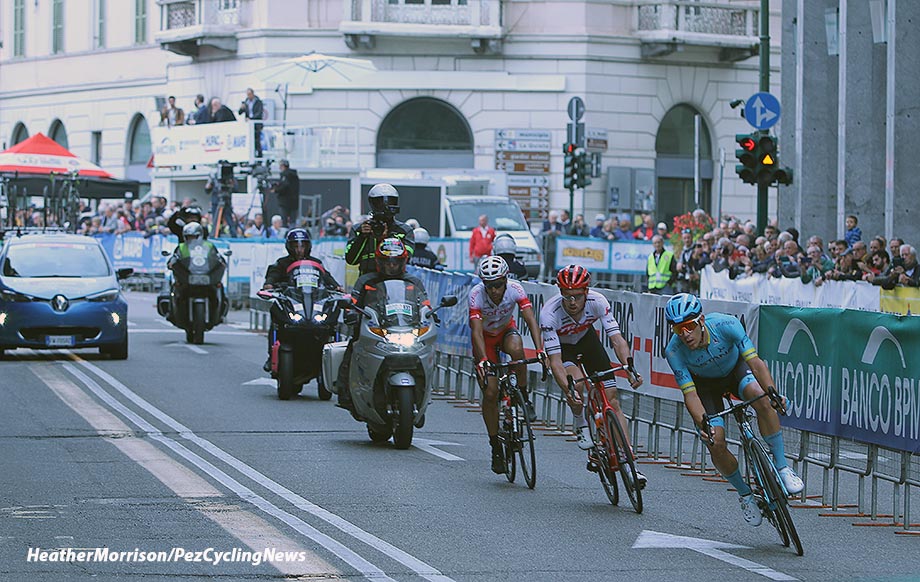 The last couple of laps come through and Ballerini had been caught, and it was all together for the last circuit. I get ready for the finish and finally they have moved some of the supporters. As they come though I can see this is Roglic’s to lose, and thanks for giving me another chance at the podium as I missed his win on Saturday. 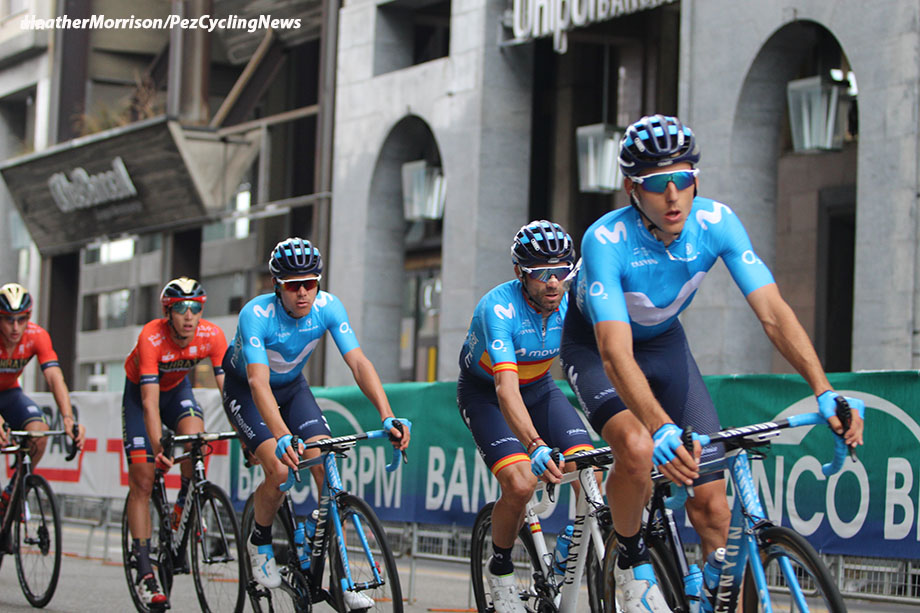 When they cross the line I got very excited because I knew Visconti was second, I thought Andrea Vendrame was also in there, but he just missed it and was popped at the line by Skuijins, last years winner. I’m very happy with this podium as one of my top three riders is up there, and I have no problems with Roglic. 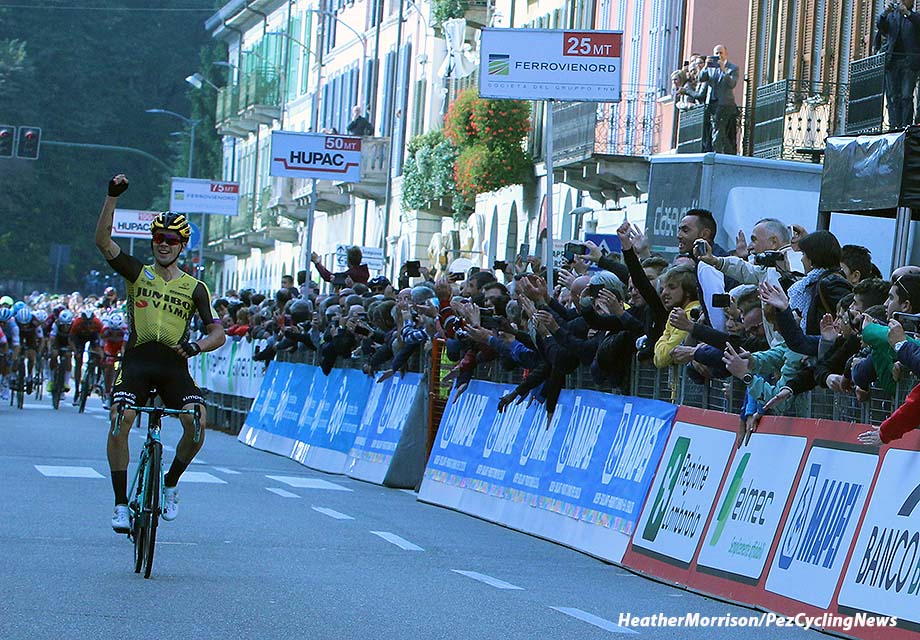 The win for Roglic pleased the fans

This is not a WorldTour race: First they have put the steps in the wrong order and it is 3 – 1 – 2, normally it’s 2 – 1 – 3, and Toms is quick to say he is in the wrong place, but they say is OK. Then Roglic is called before Visconti, so he is left standing in a corner of the podium waiting for Roglic to appear.

Visco comes out, to rapturous applause, he’s the local boy. The three on the podium are quite satisfied, but someone then points out it is all wrong and will look bad in the photos, so Visco and Toms swap, then the organisers present Visconti with the winners trophy… they just can’t stop loving the local boy. Visco hands the trophy to Roglic and then thinks about it, takes it back and presents it properly to Roglic, and tells the organisers they got it wrong. Then they present Visco his 2nd place trophy. I love Italian cycling. 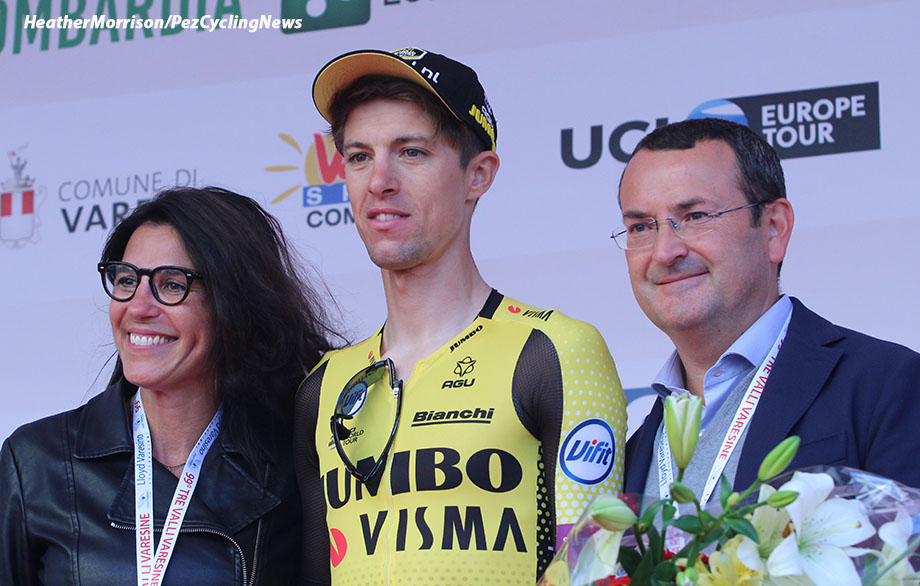 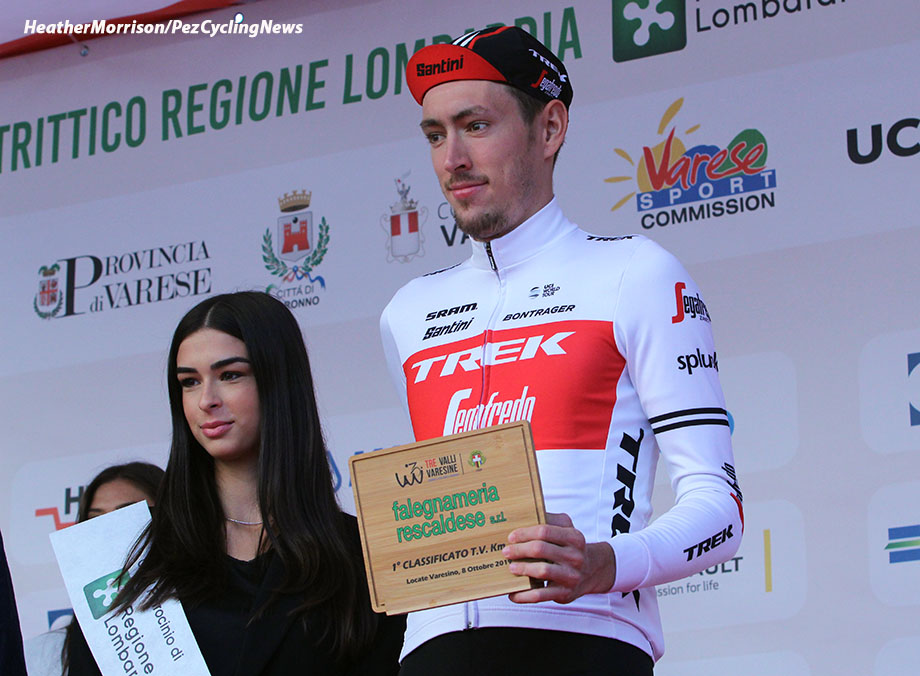 Next up; the random rewards. George Bennett was KOM, Visconti got what I think was the first from Lombardia, Michael Gogl – most aggressive. Then Valerio Agnoli received an award, despite not finishing, not sure what it was. This is what Italian HC racing is all about – its great. 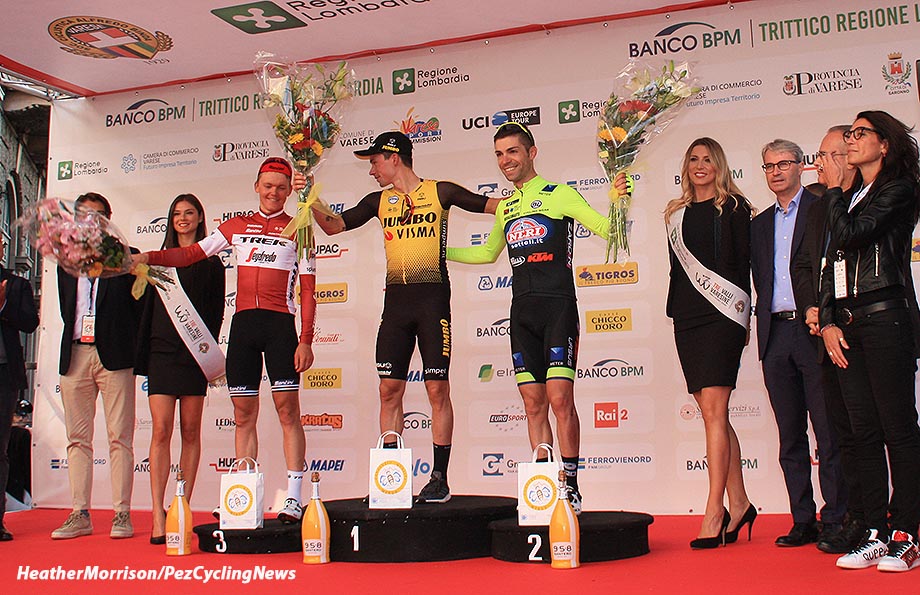 I left Varese, panicking that I wouldn’t get to Magenta in time to get the creds for Milano-Torino and Gran Piemonte in time. I did, and it was Elena, so I told her about Varese and how she would have been screaming… her face was a picture. 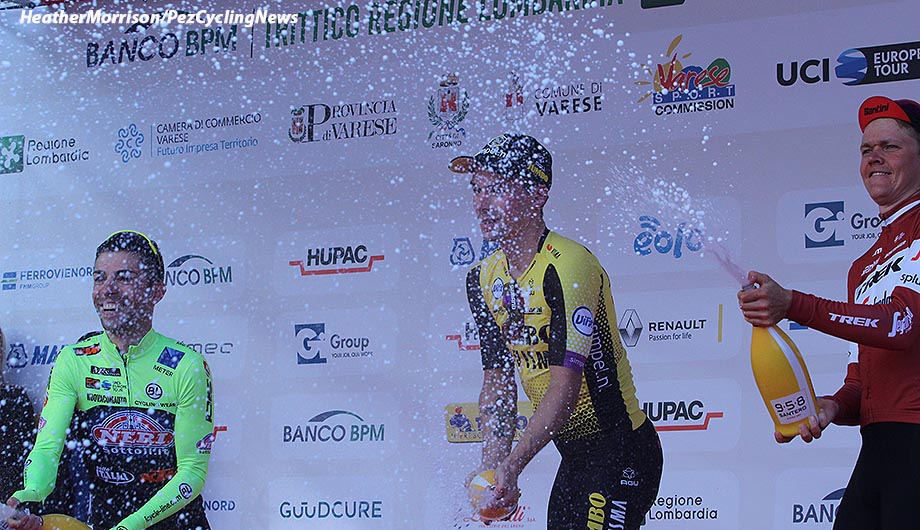 Next up Milano Torino.