Worlds Photo Gallery: After the controversy of the Men’s Under 23 race, the Dutch Elite Women made amends and took first and second places. Heather Morrison was ‘Roadside’ to take in the fun at the start and the finish. At least it was dry, no need for those umbrellas! 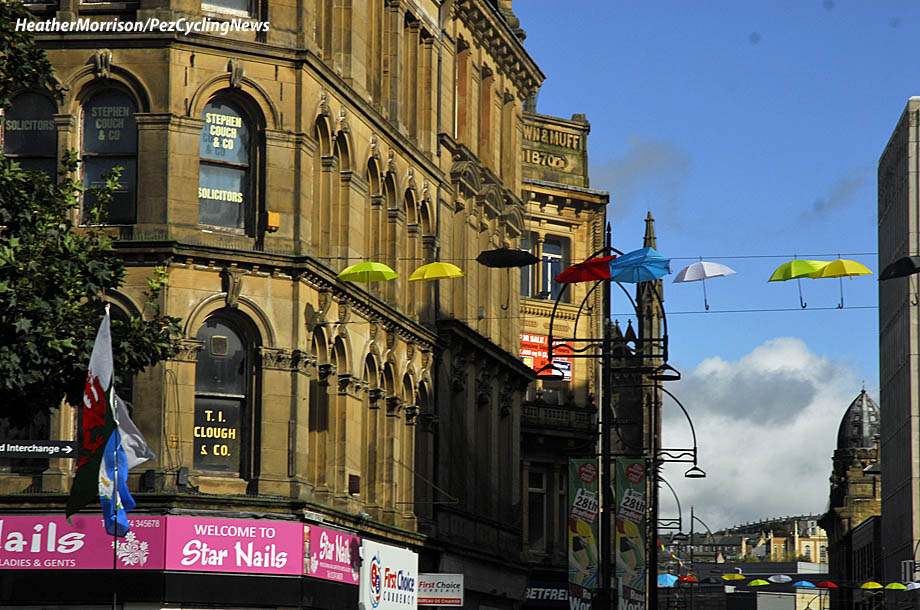 Umbrellas were needed all week in Yorkshire, not so much on Saturday

The day started out ok, the shuttle bus was at a sensible hour and caught it fine… got there went to the team buses and had a look around. It was pretty miserable so no one really warming up. 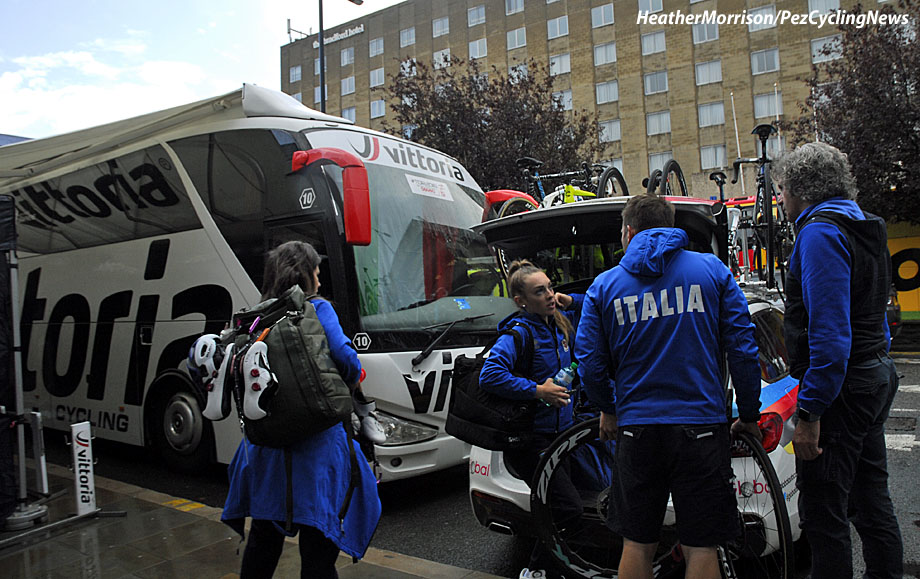 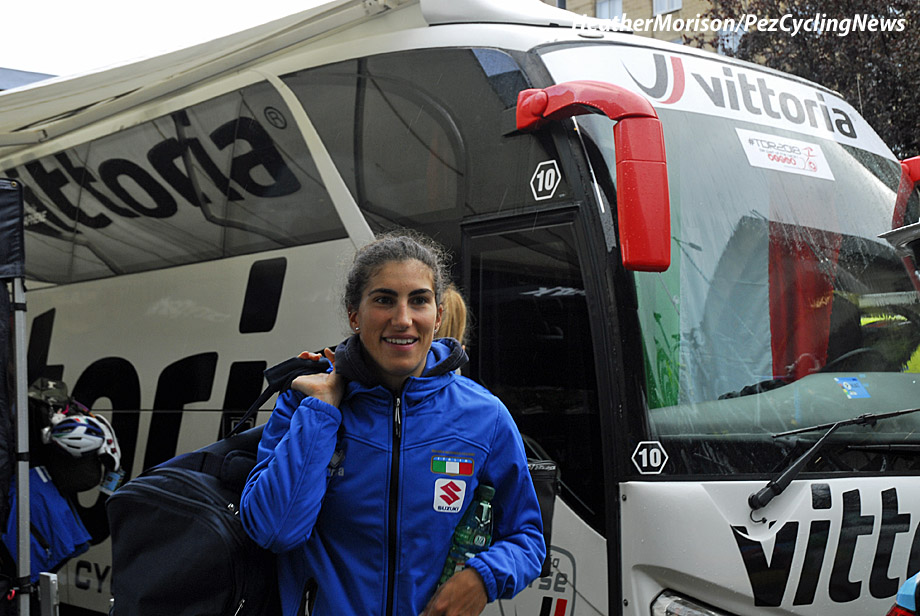 An early start for the Italians 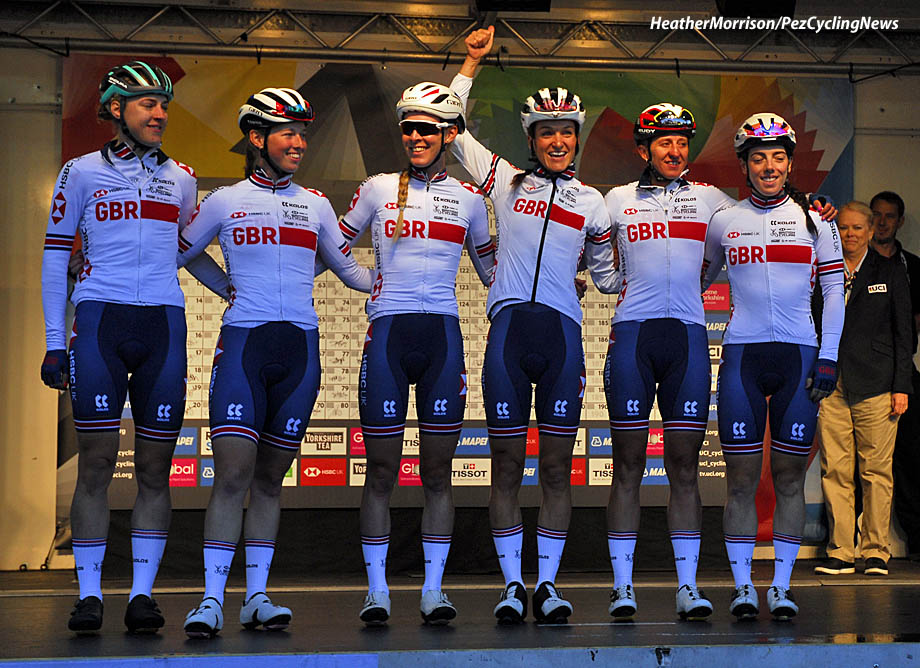 Big cheer for the home team

I’d noticed today’s schoolboy error pretty quickly, I had left my SD card for the Canon on the shuttle bus. I head back over and think also to pick up flashes which were also in the bus. I rush back round the road to the buses and the driver is not there. So I can’t get the SD nor the flash. This leaves me just with the temperamental Nikon I just bought 2nd hand a couple of weeks ago. 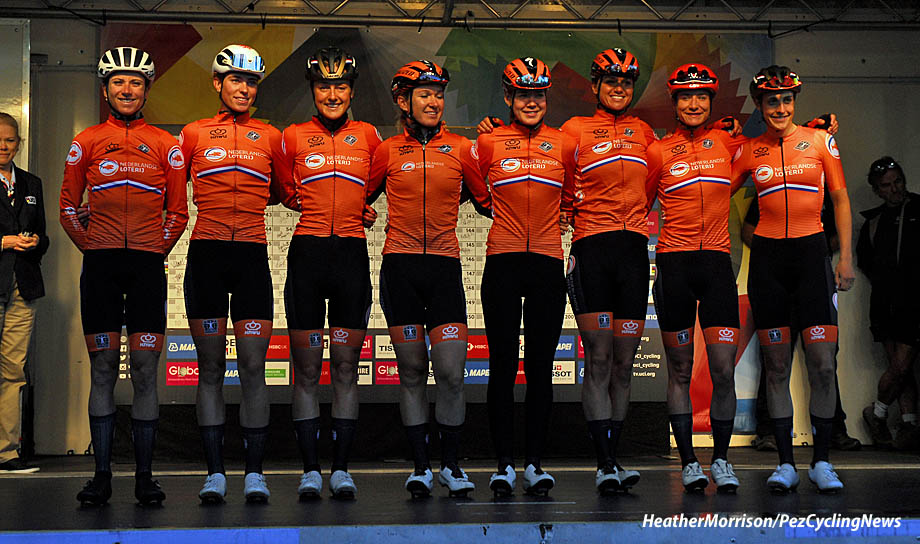 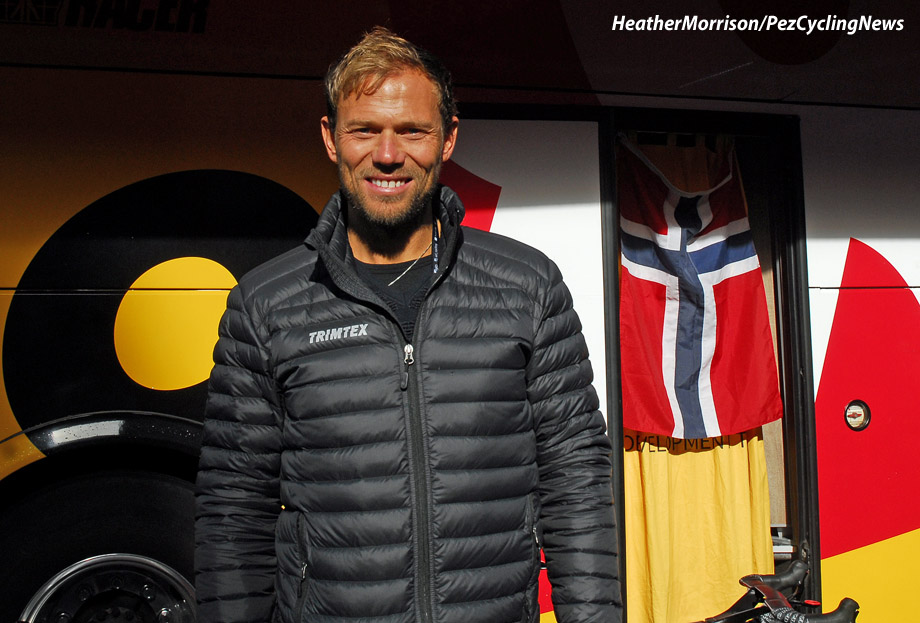 At the bus, a couple of Dutch journalists were just parking in front of our bus, so I asked them how they felt about the result for Eekhoff, they felt of course that he was treated very harshly. Two theories they had were that Italy complained and/or it was seen as a way to get a Brit on the podium. It’s not a story likely to go away fast. 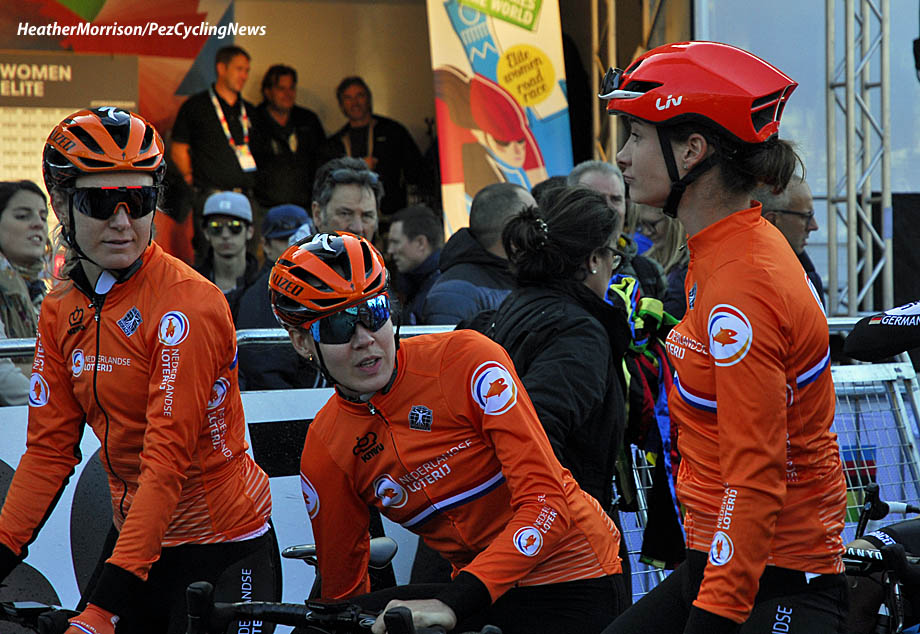 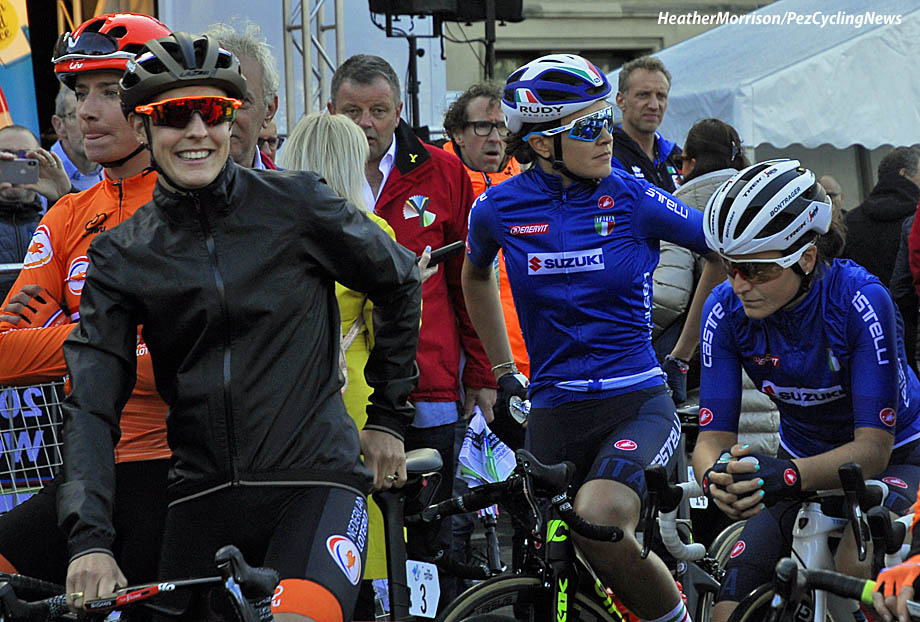 I head to sign-on to at least catch people there. I get most teams signing on – so I was quite happy. 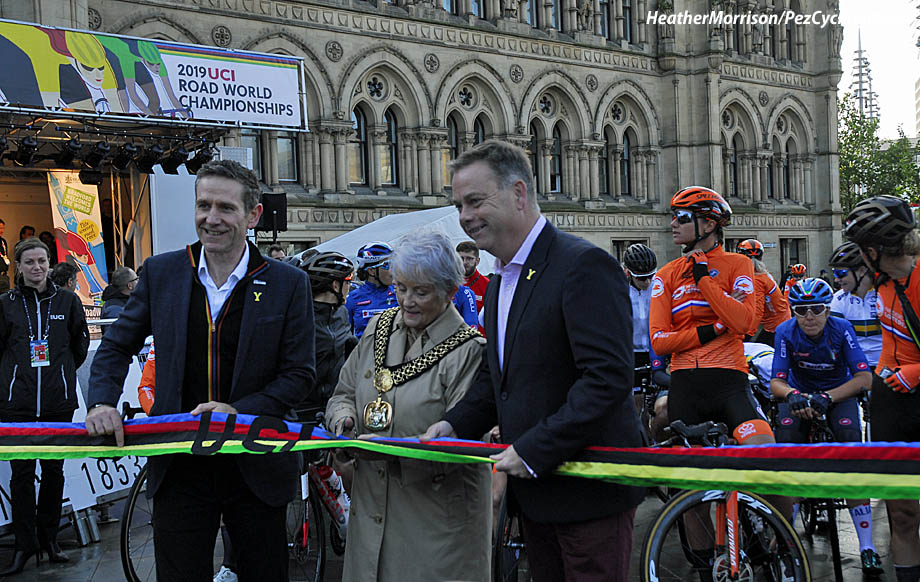 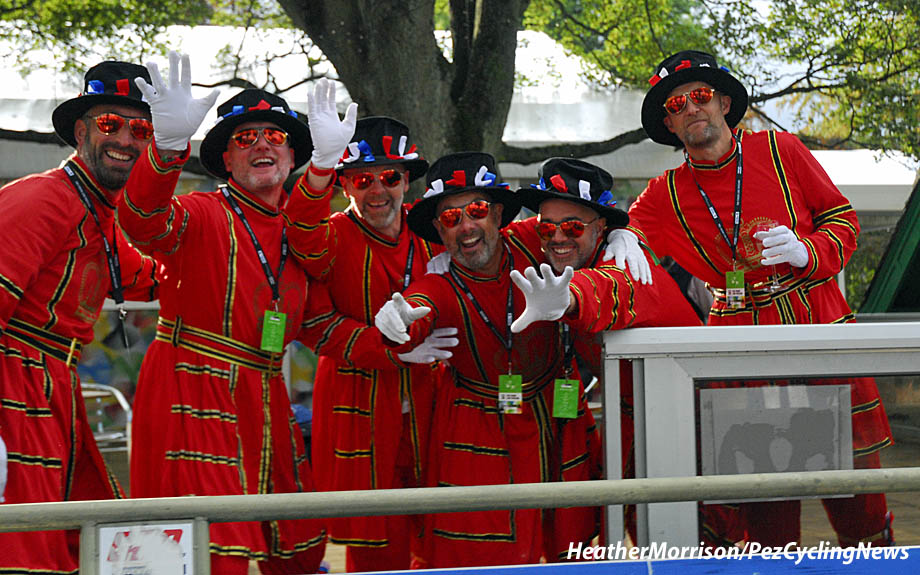 Beefeaters at the finish

After about 1 hour we head back to Harrogate, to the media centre. We get there with a couple of hours to spare so I think I will get ahead of the day and download the mornings photos, they are terrible, all very under-exposed. I ask a Nikon user in the media centre and he says that whoever had this camera last had programmed it strangely and he id something (I really need to read the book) and it was great all afternoon. I also got the SD card in my Canon. 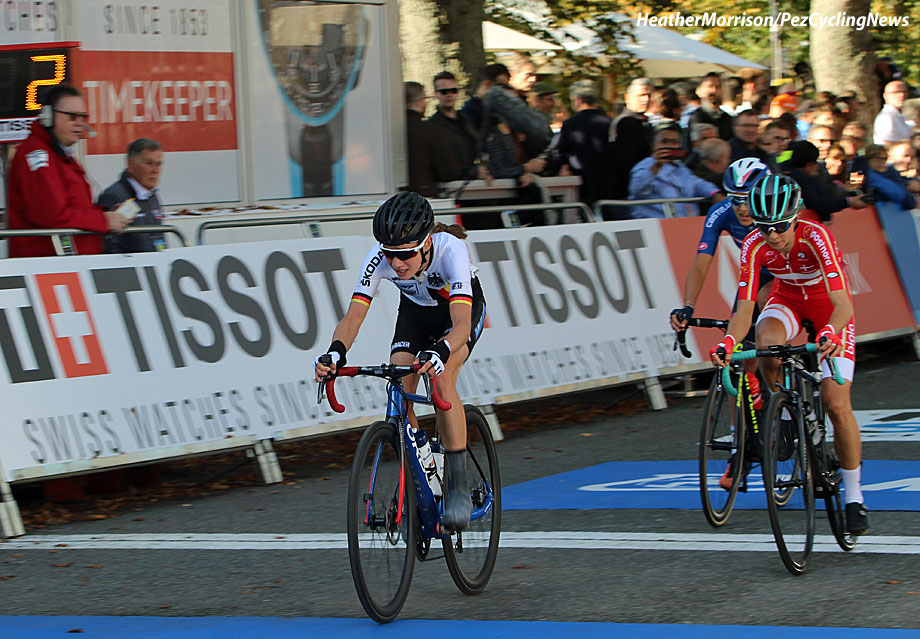 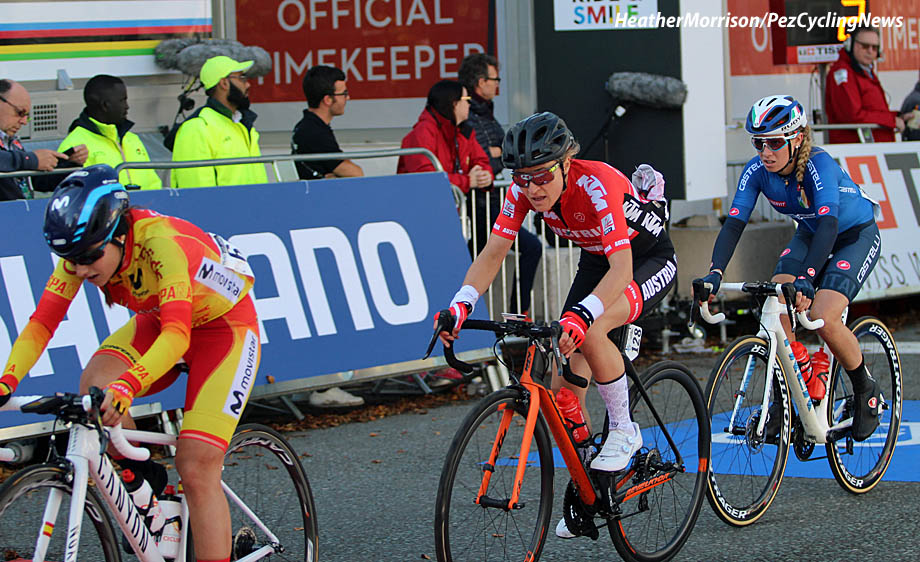 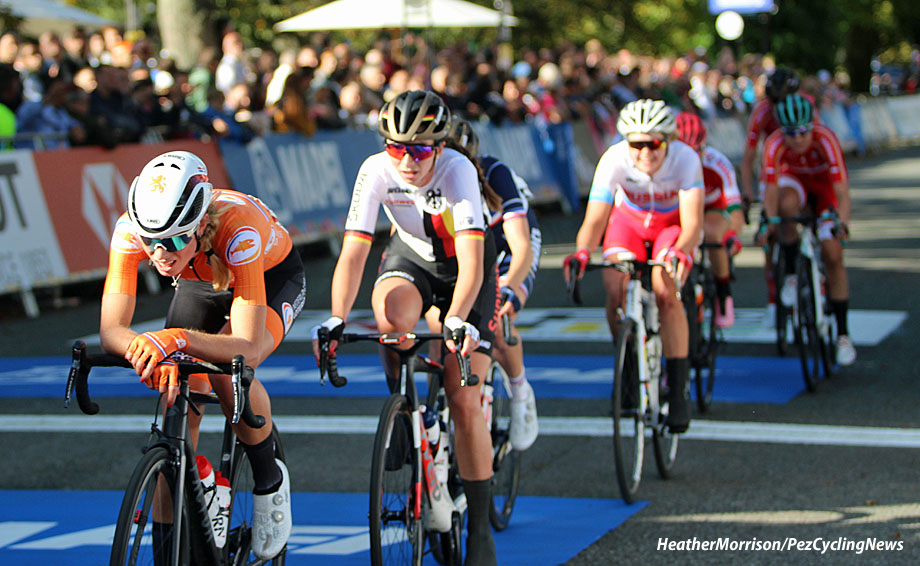 Puppy Paws over the line 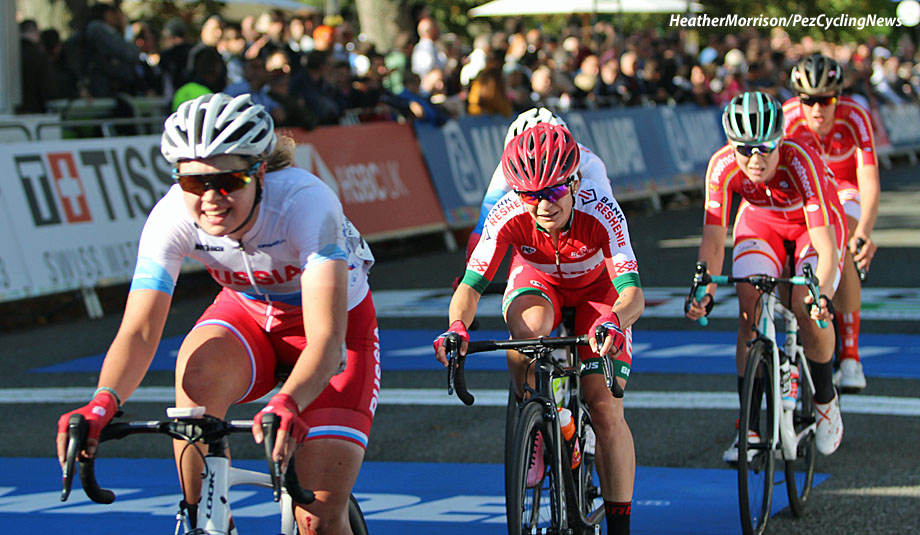 Very happy Russian and some not so happy Danes

Once the women had reached the circuit of Harrogate I headed up to the finish line and we discovered that the UCI had added a platform for us lowly yellow bib holders. We were hopeful for a little while. 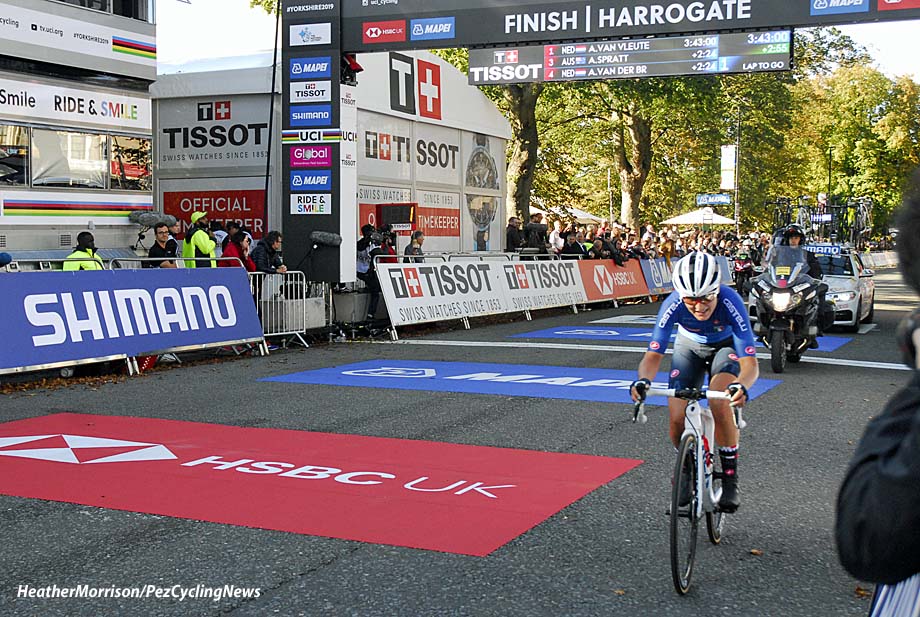 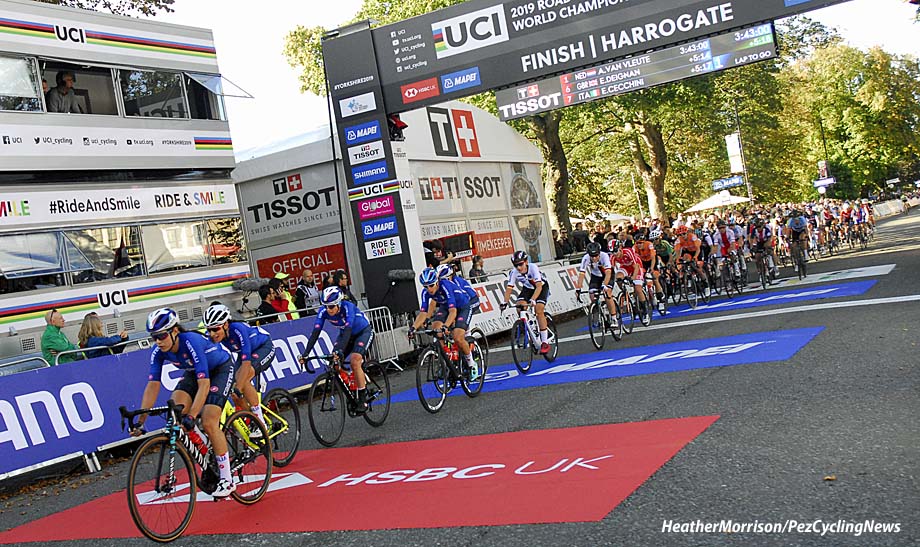 Italy leading the peloton on the final lap 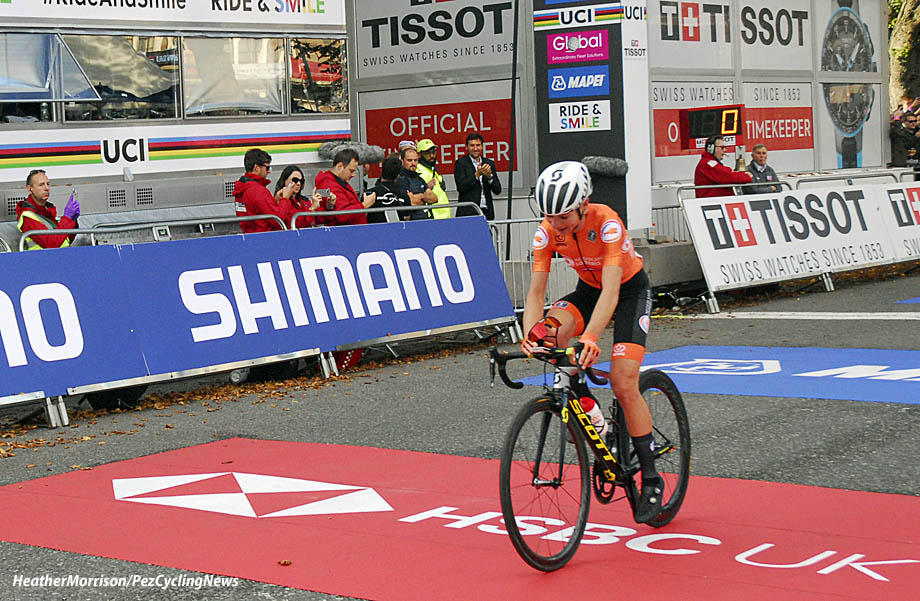 Only Van Vleuten photo without another photographer in it

The result was a great one for Netherlands. Van Vleuten, van der Breggen in 1st and 2nd and Amanda Spratt of Australia in 3rd. The Dutch girls ran away with it after the disappointment for Eekhoff in the U23 race. 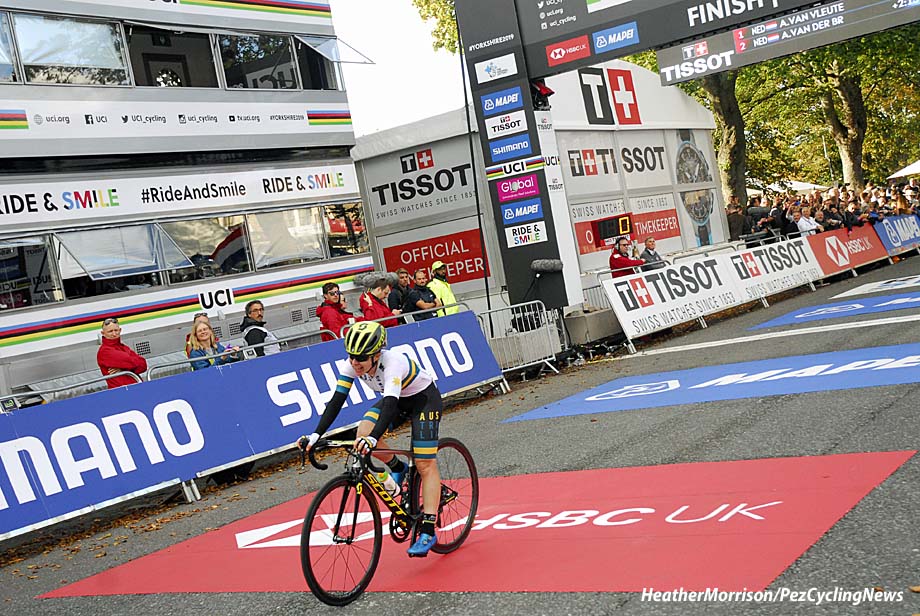 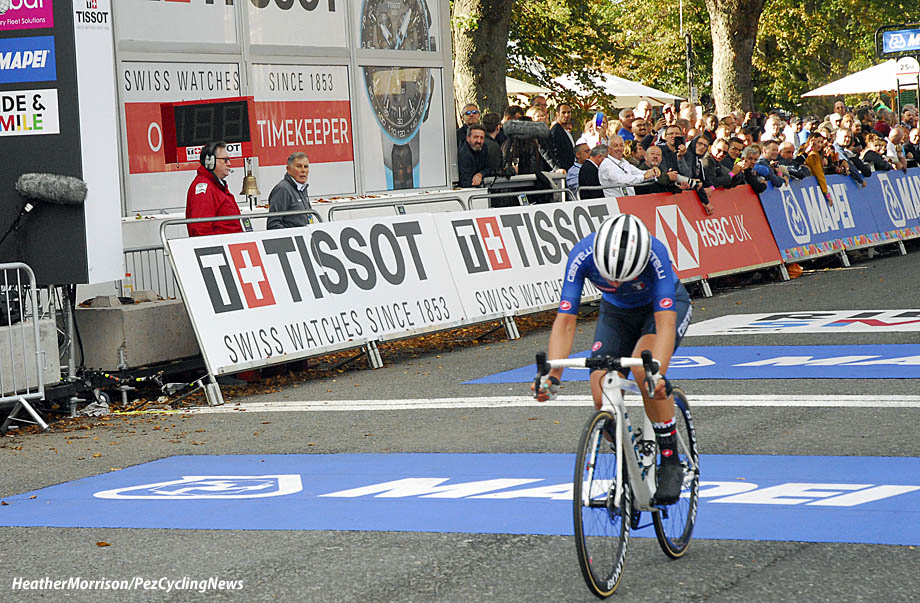 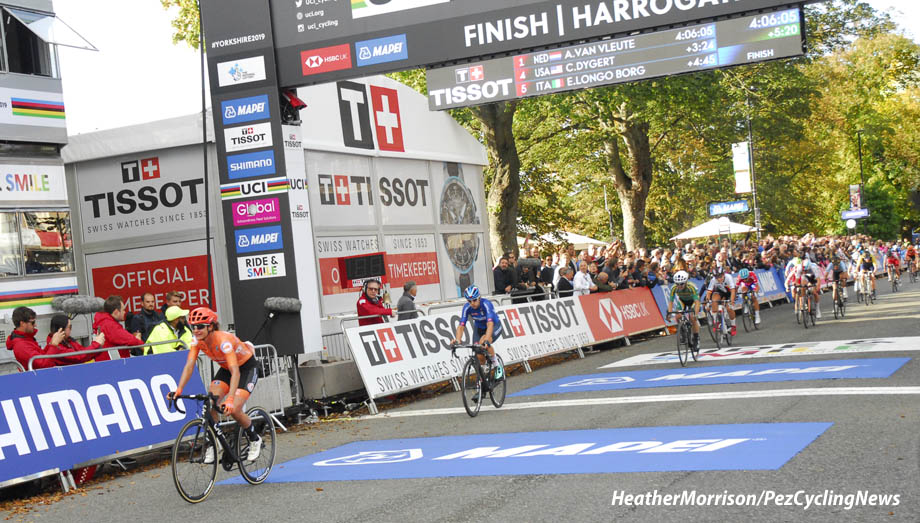 Vos and Bastanelli 6th and 7th 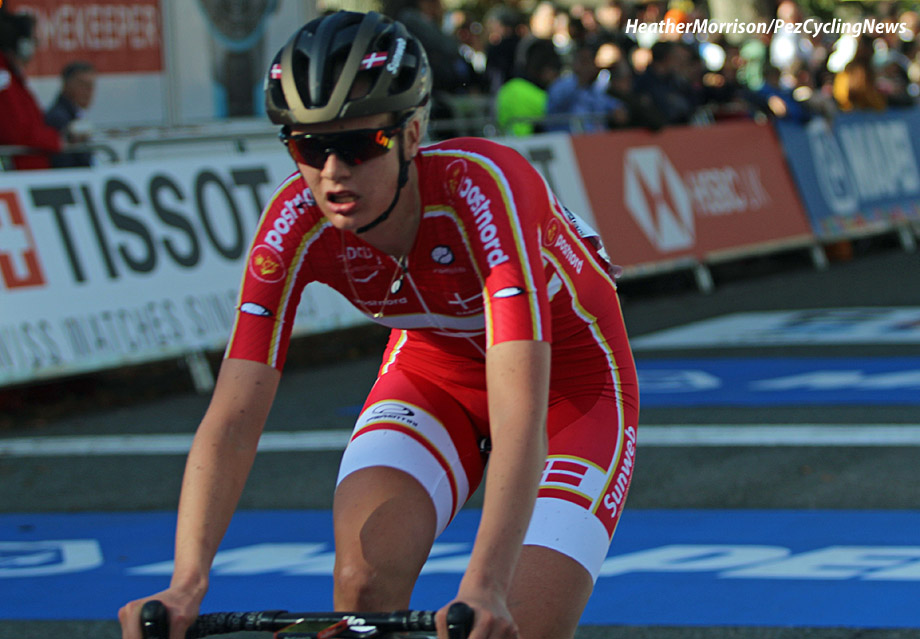 The podium celebration was quite quick tonight after last nights jury hold up, got some good photos and started back down to the media centre. Walking back down the road we came across some performing beefeaters and I spotted my local Falkirk cycle club in all there chequered glory, I took some photos promising publication, but the Nikon had swapped over to over exposure, no idea whats happening with this camera, so they were a disaster. I wanted to feature Murray Ferguson from the club who had cycled down over 2 days 140 miles a day to be here. But the photos were all terrible. 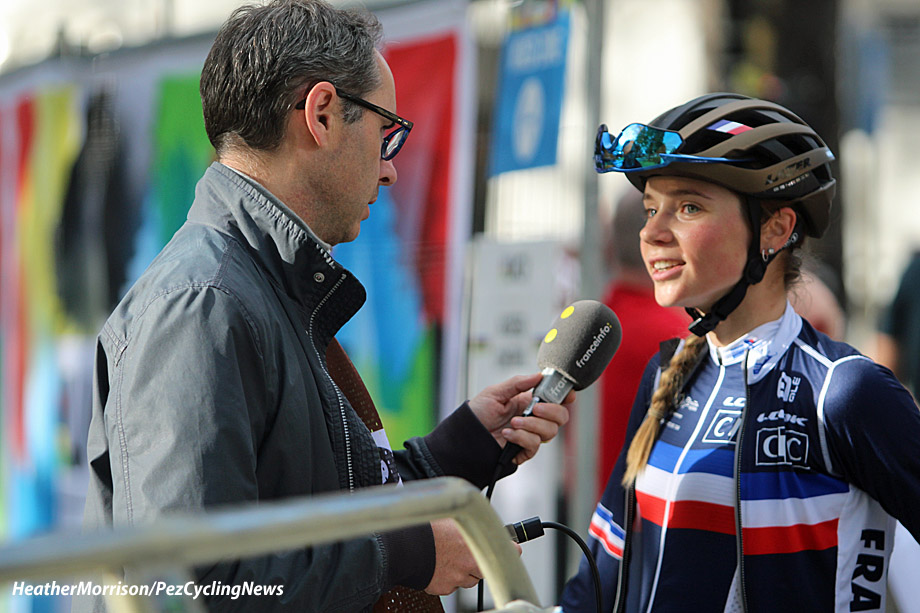 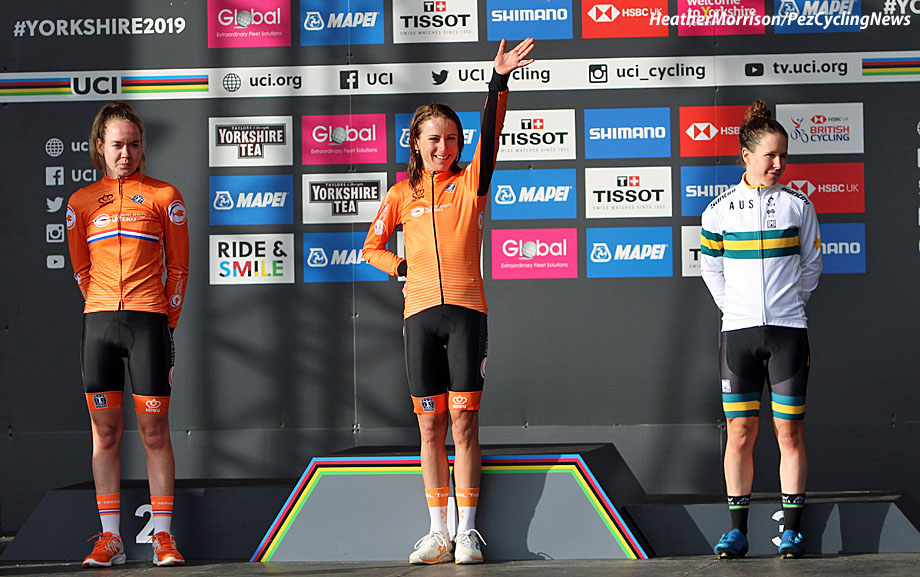 I get down to the media centre and get the photos downloaded, but when it comes to writing up the day I am just tired. And, an Irish photographer Caroline has asked me if I would go to the fan zone with her this evening. So we head to the zone, with the intention of finishing off when I get back to the hotel… 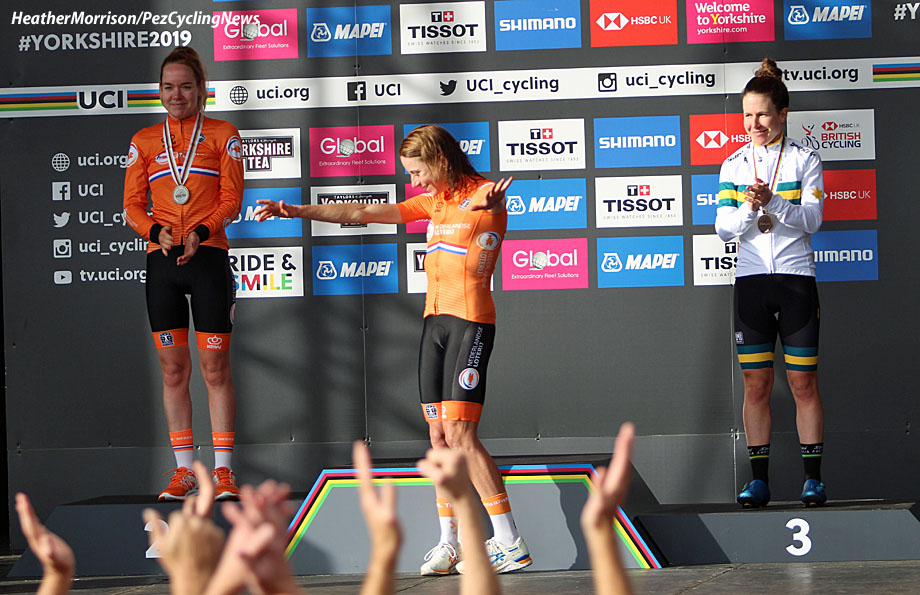 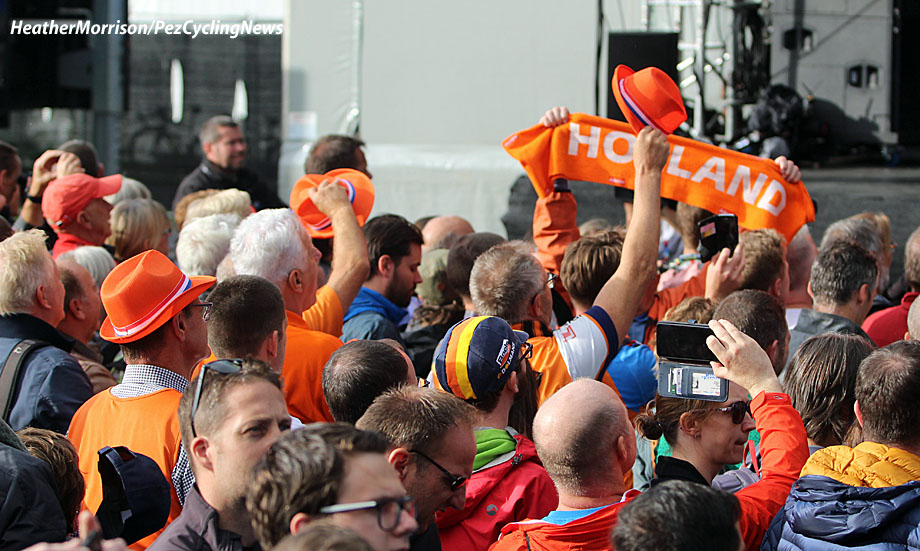 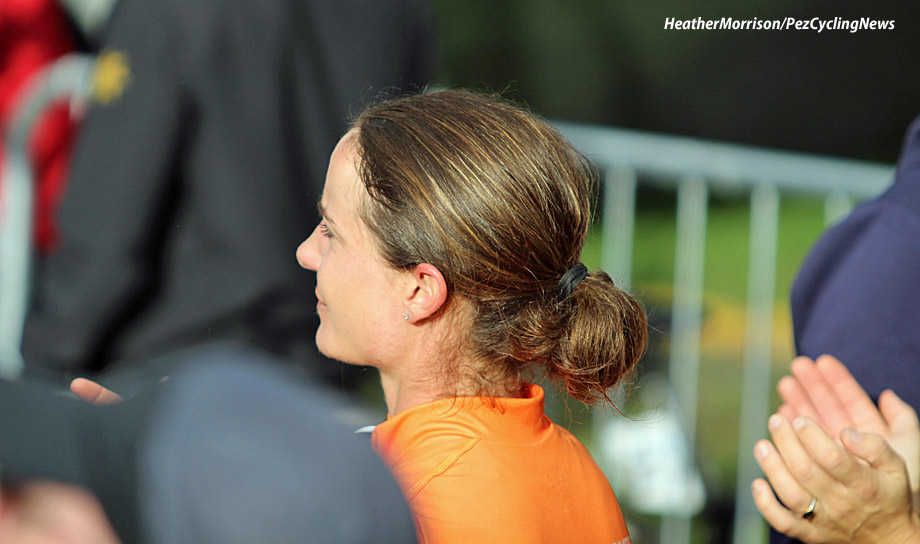 Mariane Vos in the crowd

After making info movies for Bobble Hats and wading through the quagmire of the park, we go for something to eat. All this leads to me not getting to the hotel till 11:45… No work tonight.
One good thing we managed to organise though, is to get on the 7am shuttle going for 2 stops on the route rather than the 6am bus we were on and that would only go to start and finish… quite excited for the final day. 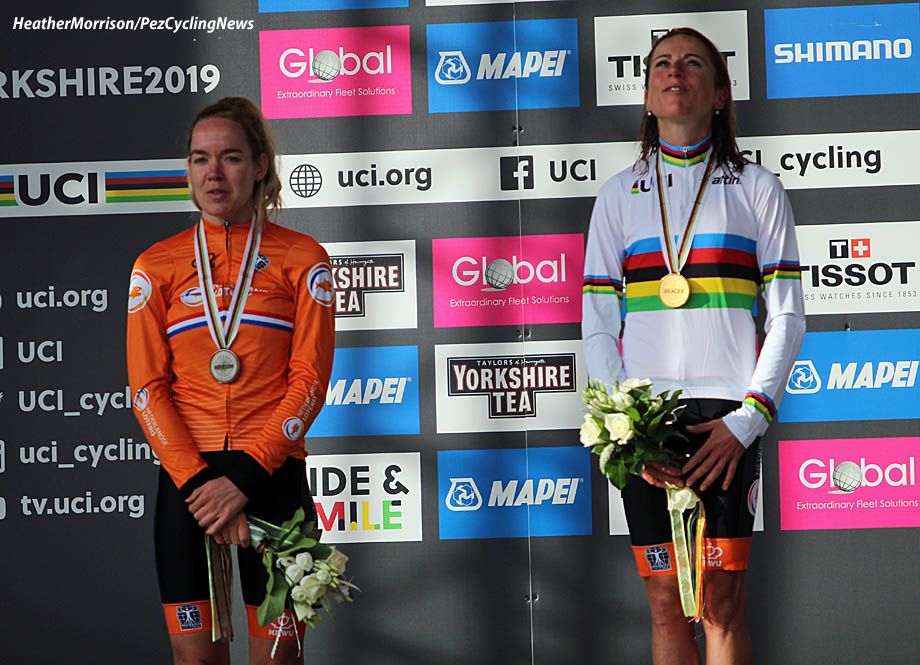 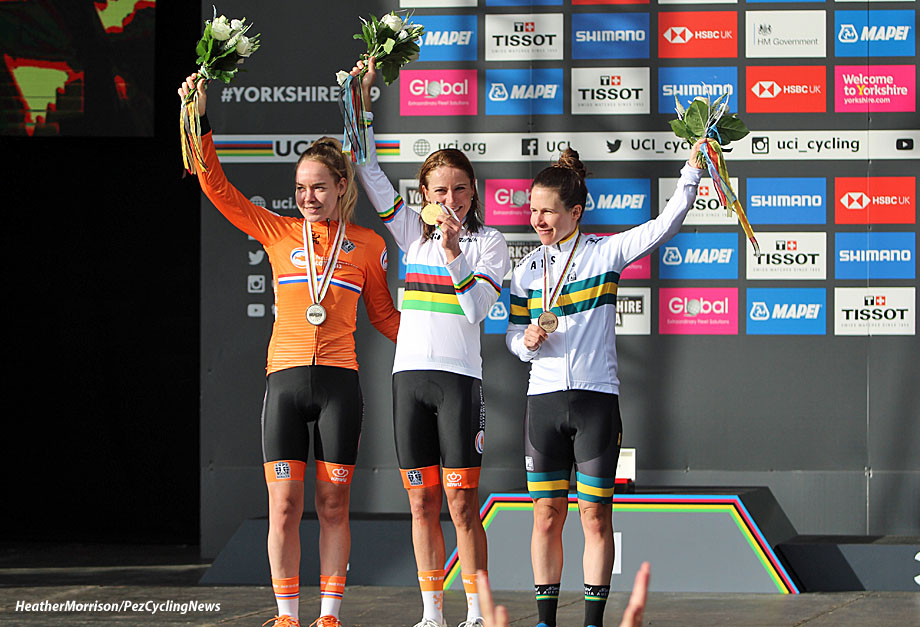 Stay PEZ for Heather at the Elite Men’s Race.