Worlds Photo Gallery: Day 2 of Heather Morrison’s World championships in Yorkshire wasn’t the most successful, but it wasn’t a great day for the Dutch either! Heather was there on the finish line in Harrogate to take in the action, confusion and, eventually, the joy of the Men’s Under 23 World championship race. 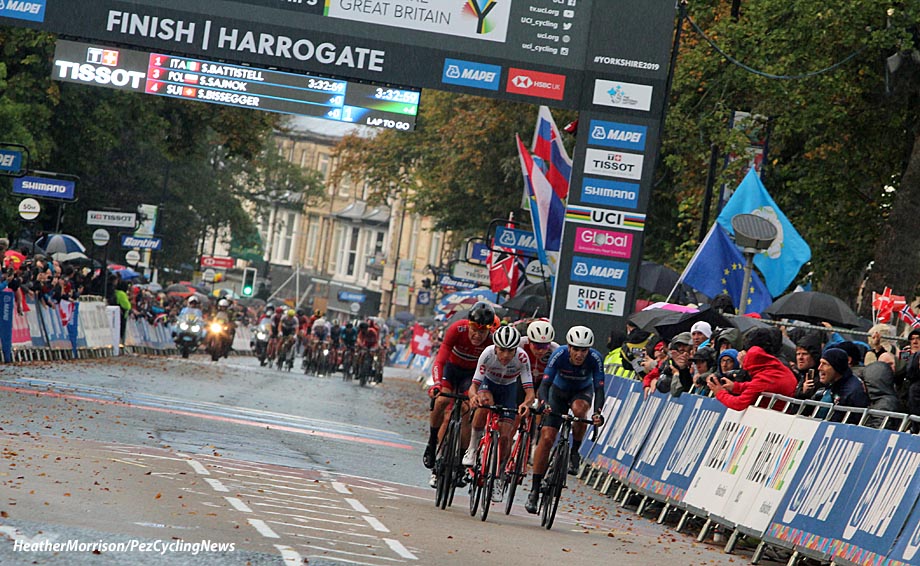 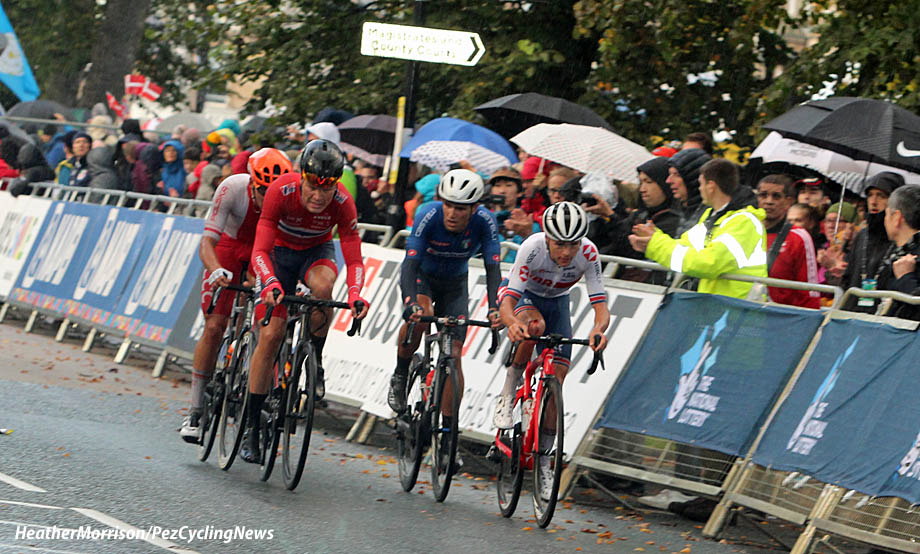 1 lap to go, Battistella and Pidcock lead the front 5 over the finish line 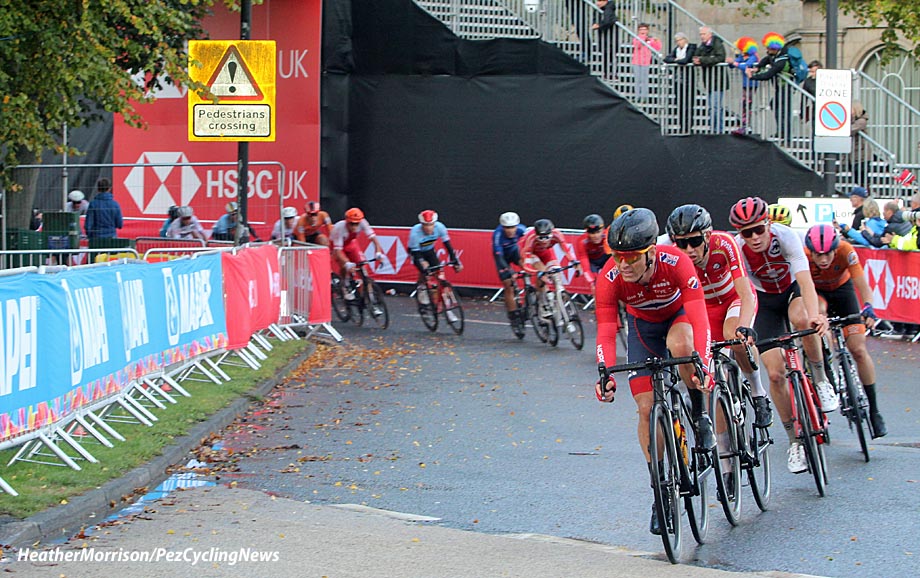 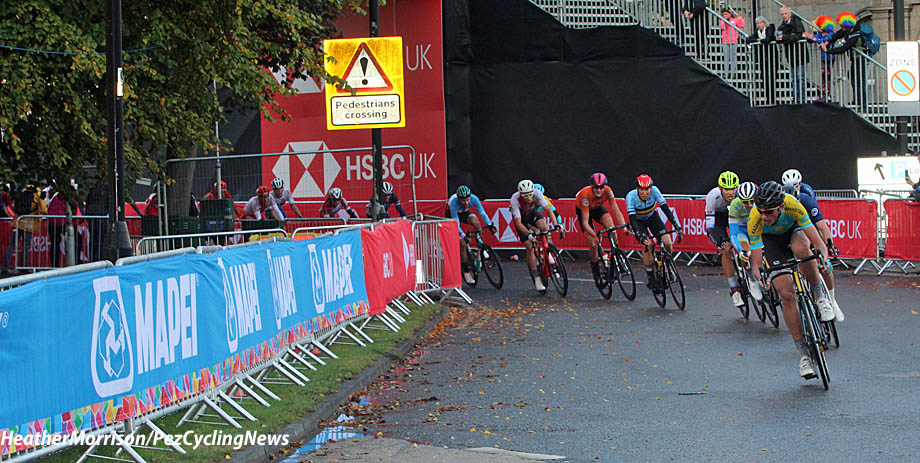 This is day 2 of my foray into UCI ran races… oh, it’s different. First my pass was incorrect and I couldn’t get a photo bib to get the access I was hoping for, however I discovered that UCI only let red bibs on the finish line. After the race I was able to change my pass and get a bib – yellow – but I have my bib. 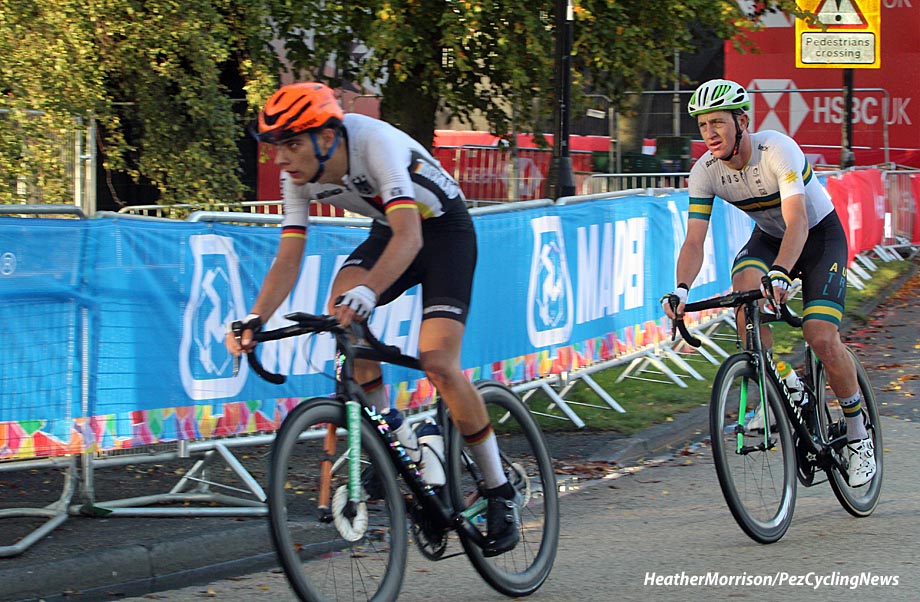 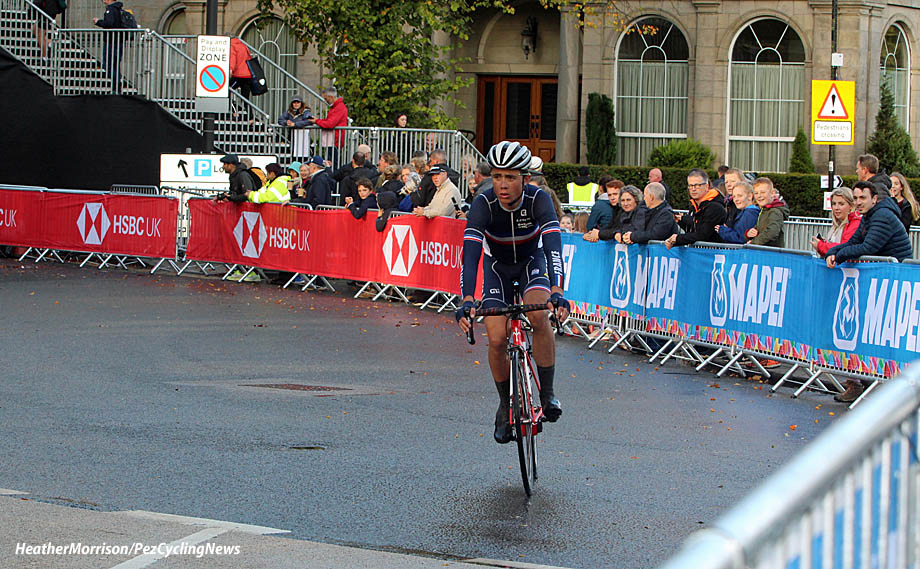 French rider about to abandon with a lap to go

So today started badly. The bus to get to the start of the Women’s Junior race was leaving at 6:30am and if I want to get that I would miss the start of the Men’s U23, so I decided to do no starts and concentrate on the finish for both races. Seemed sensible until I was trying to get into Harrogate after 10am. No way through and as the helicopter was overhead while I was sitting in traffic, I knew I wasn’t making it – so no junior woman’s race. 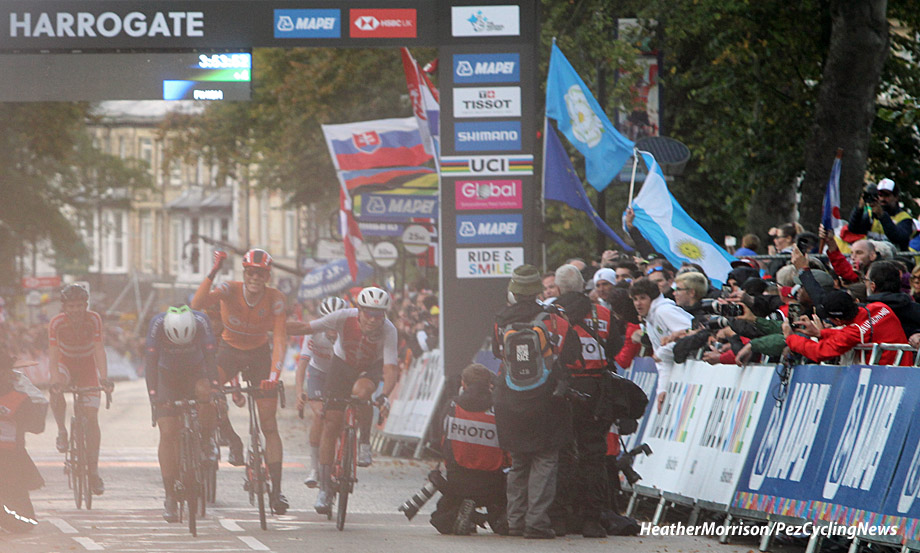 So met up with some Twitter friends and had lunch and then went to the finish, met the Dutch contingent from, Twitter and we waited for the finish. 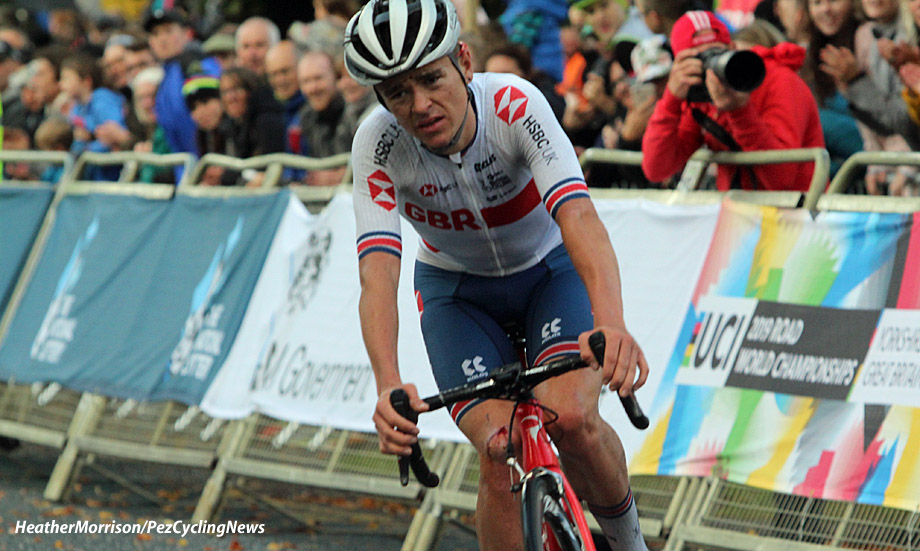 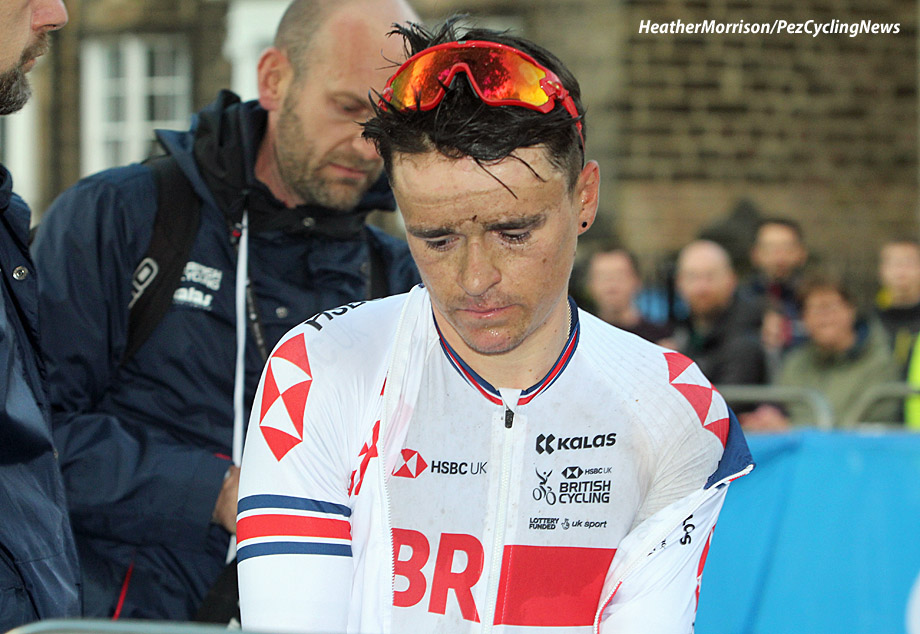 It had been a hard race

As we had time, we thought we would walk along the course, about one to two kilometres, to find the climb we were told was on the circuit. After 1K we asked someone, and it was another four kilometres up the road. So I went back for the finish and the Dutch (that left the pub) went on another 4 kilometres to find the hill. 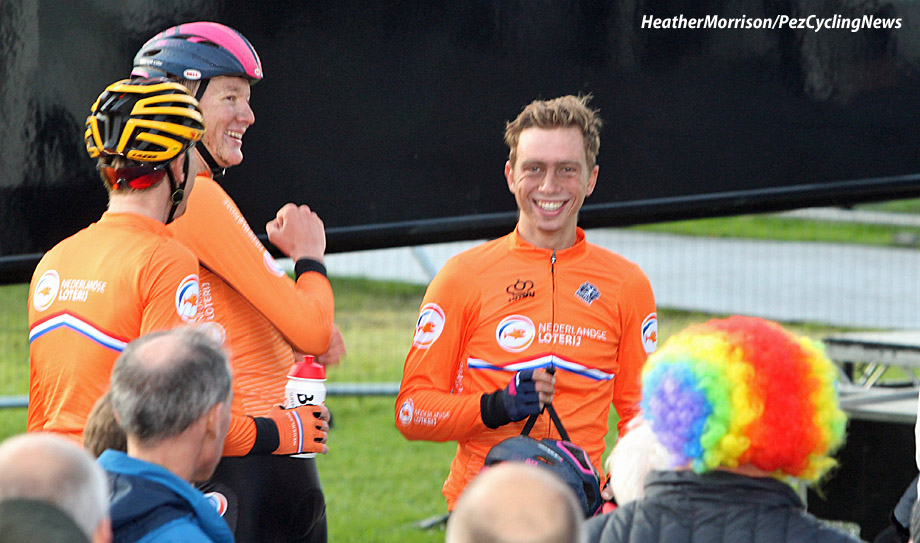 The Dutch riders were happy 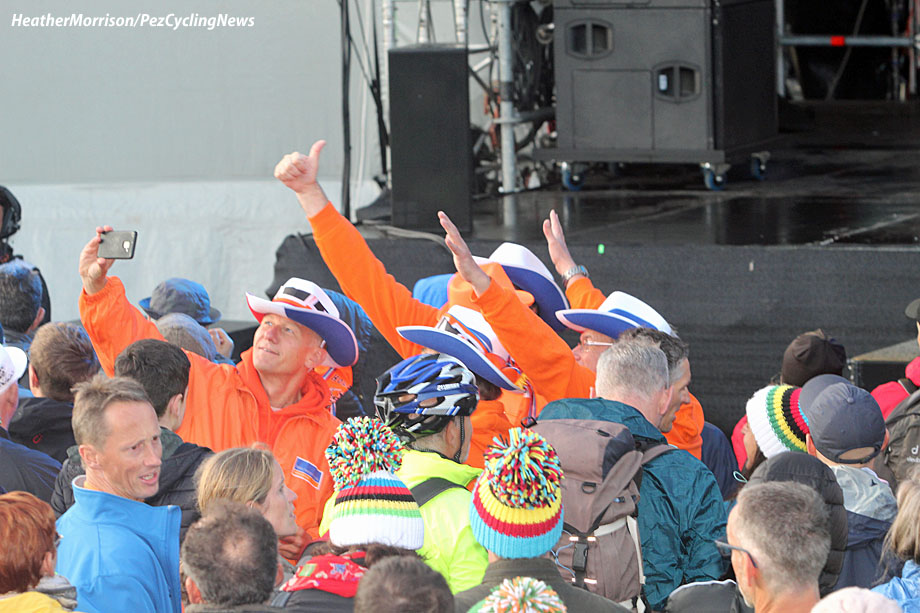 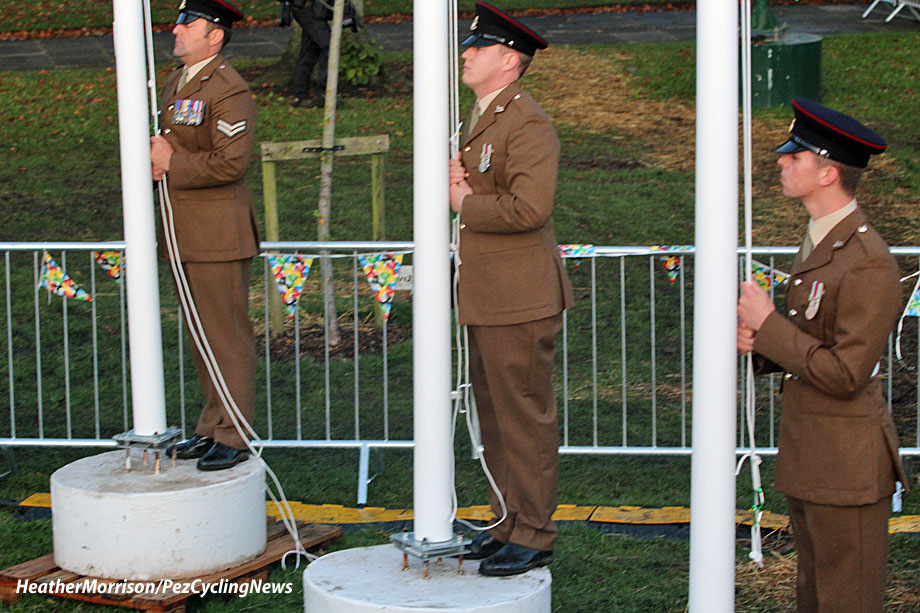 Back at the finish I had day two of UCI restrictions for photographers – I get Shepherded into an area for yellow bibs – It wasn’t that bad… until of course they approach the line and someone pops up for the zero seconds it takes them to cross the line – then disappears. 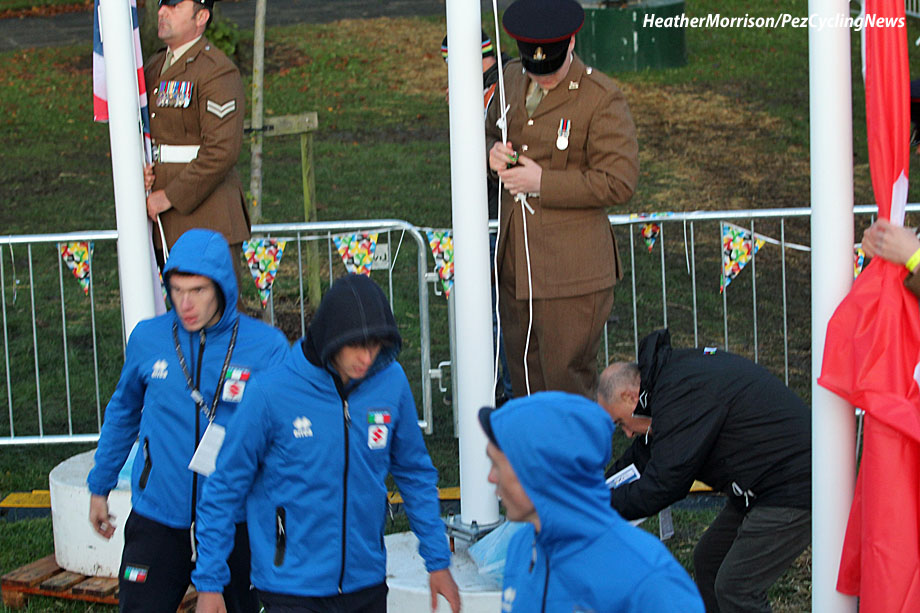 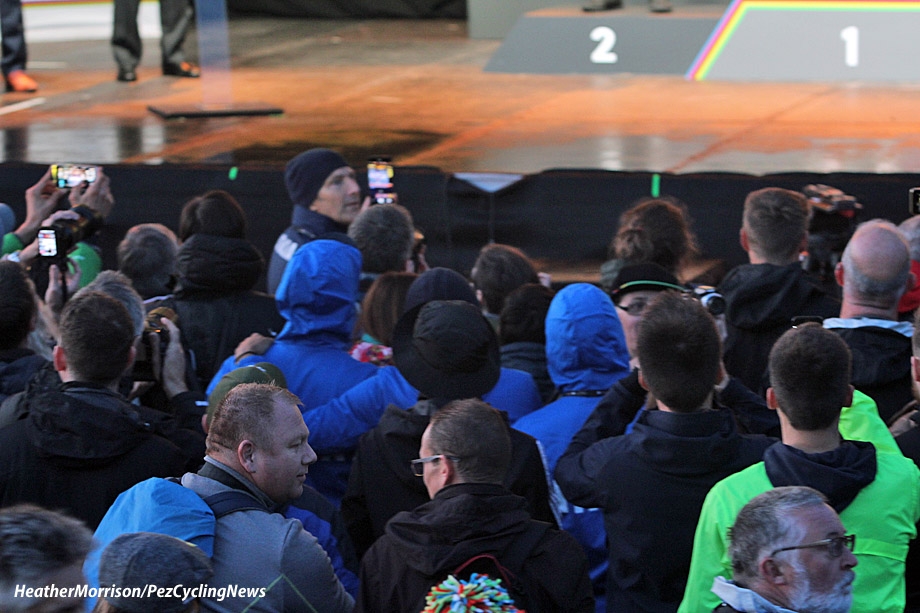 I try to get to the photographers crowding the winner, when I find the other yellow bib restriction – we need to wait in our little area until the riders have cleared… what… then I find that I cant walk where I went the day before with no bib, but I am guided to another entrance to the podium. 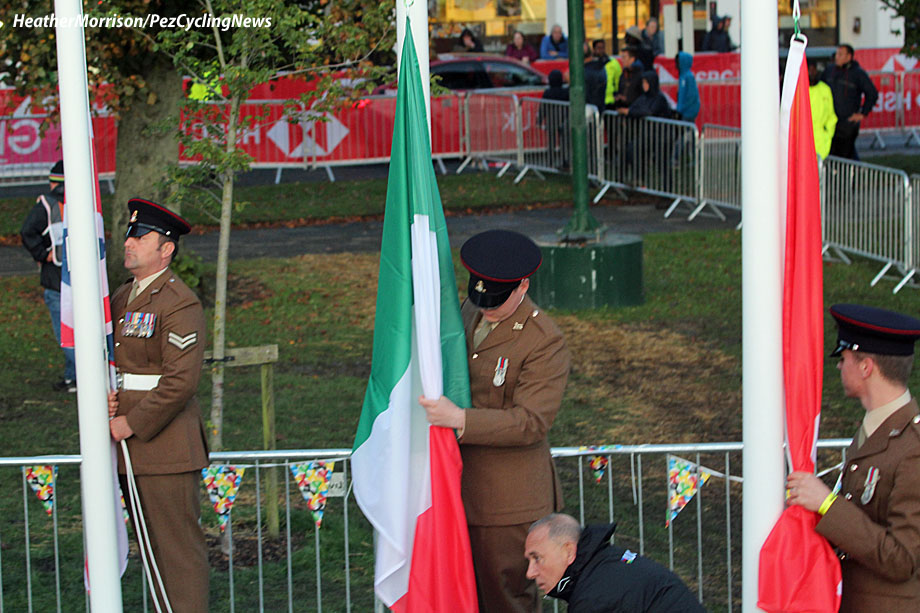 The photographers all have a platform (another UCI 1st for me) behind joe public, who can go right to the podium – but the platform does work. So we are expecting a dutch winner and Italian 2nd, no one has a clue who was 3rd… you must understand, when you are at the race you have no idea what has happened. 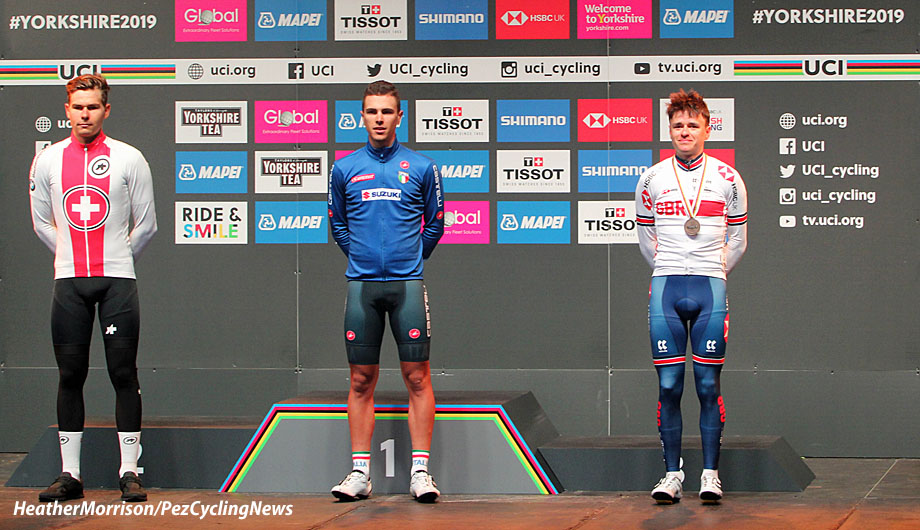 There was a bit of booing 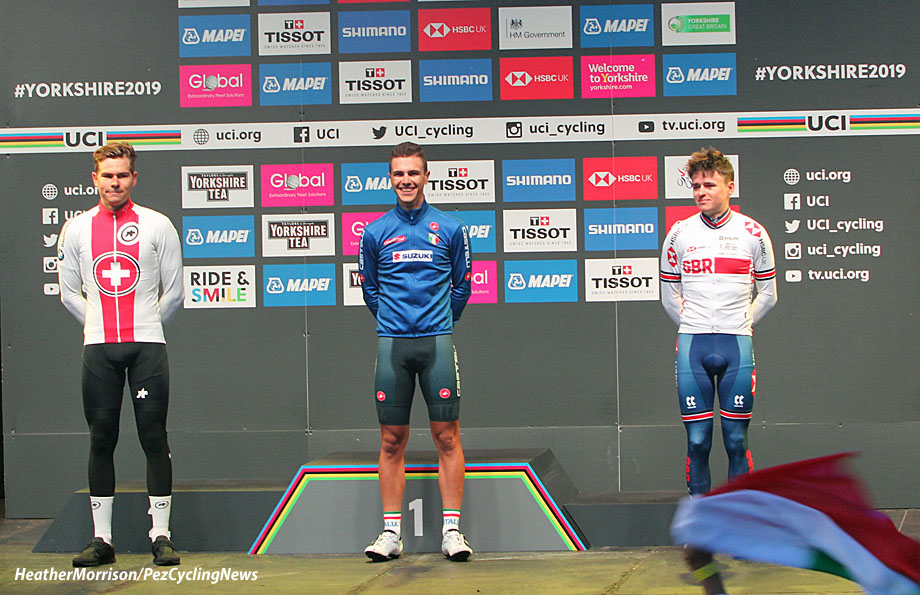 But there were smiles on the podium

We notice on the big screen it says – ‘jury is presiding’, oh oh, something has happened… after 20 minutes we start to guess – bad sprint, deviation from line? After 30 minutes – its a motor, someone had a motor… Another 10 minutes – drugs?? 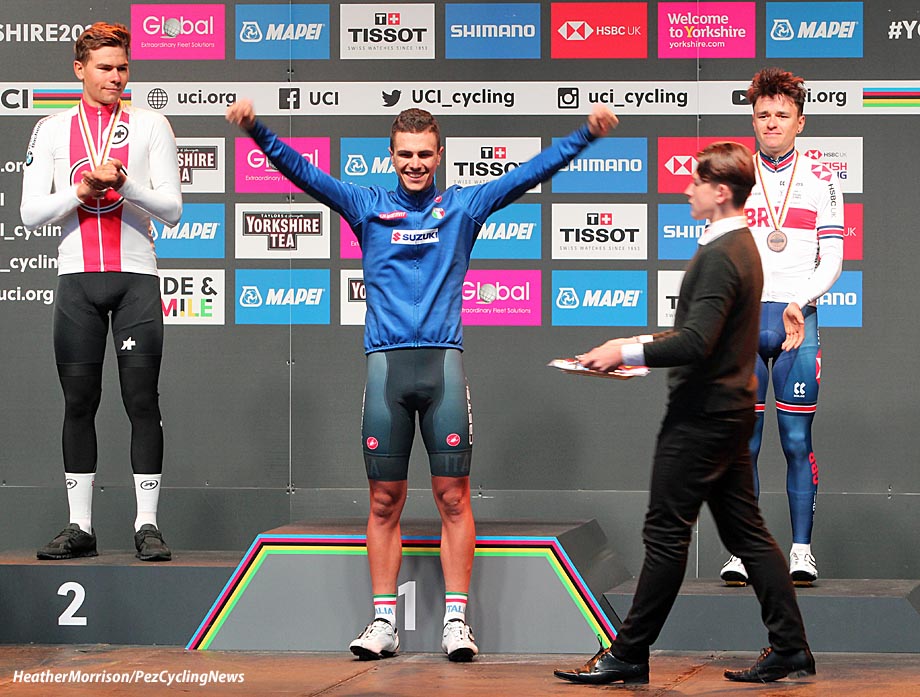 The rumour goes up that the Dutch team who were waiting for their rider on the podium have vanished. Then here is a rush on the photographers platform as some who has contact with the outside World had hear what had happened. One or two run off the platform heading towards the finishing strait. We see the Winner, Nils Eekhoff, being ushered away by his coach – it’s a very sad sight. Then we noticed the soldiers that have been standing to attention at the flag poles – the whole time we’ve been waiting, actually have no flags. Wow that was quite poignant to see. 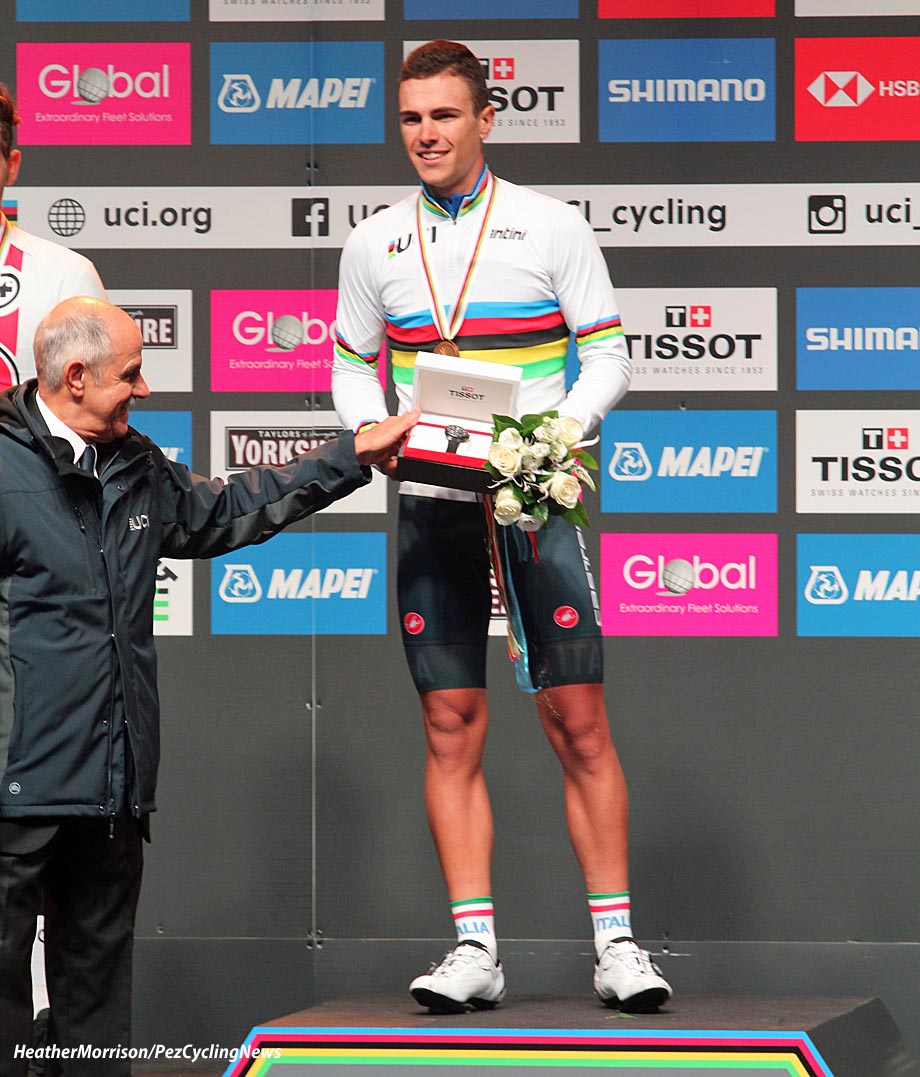 And the Tissot watch

Then we see the Italian team running from the road, trying to get to the podiums… and a UCI representative appears with the flags. First unfurled the Union Jack, oh aye, one DQ and one Brit? Next Switzerland, and then the tricolour of Italy. All of this without an announcement from the UCI to say what is happening. 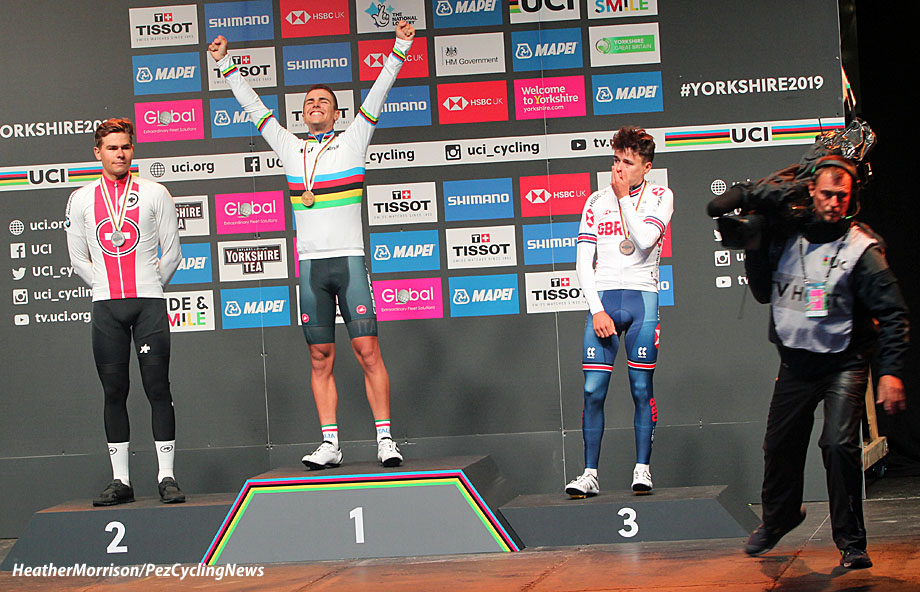 Then, eventually about 7pm, we get our podium. The Italian, Battistella, cannot hide his joy and excitement. He said later he is sorry to get the win like this, but in the moment he is joyous. And Pidcock, who was moved up from 4th to 3rd and onto the podium, His look was; this was not how he wanted to get a UCI medal. So terrible disappointment for the Dutch and Nils Eekhoff, but joy for the Italians. 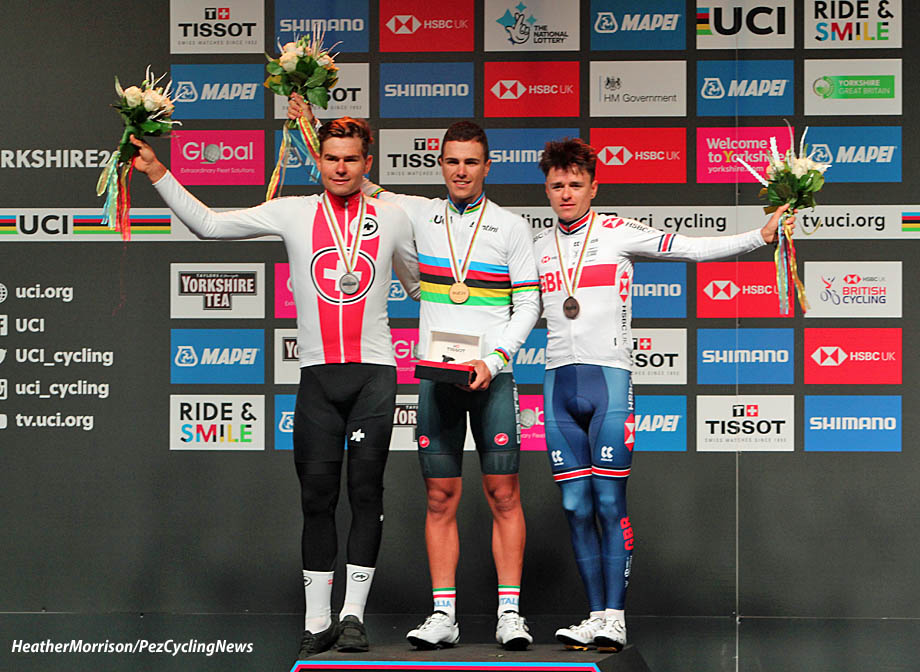 The end of a long day

And me? Well I was supposed to be going to the Cycling Podcast night in the Royal Theatre. I got back to the Media centre and the queues for the show were already beginning to dwindle – I was wet and cold with work to do… Next time. 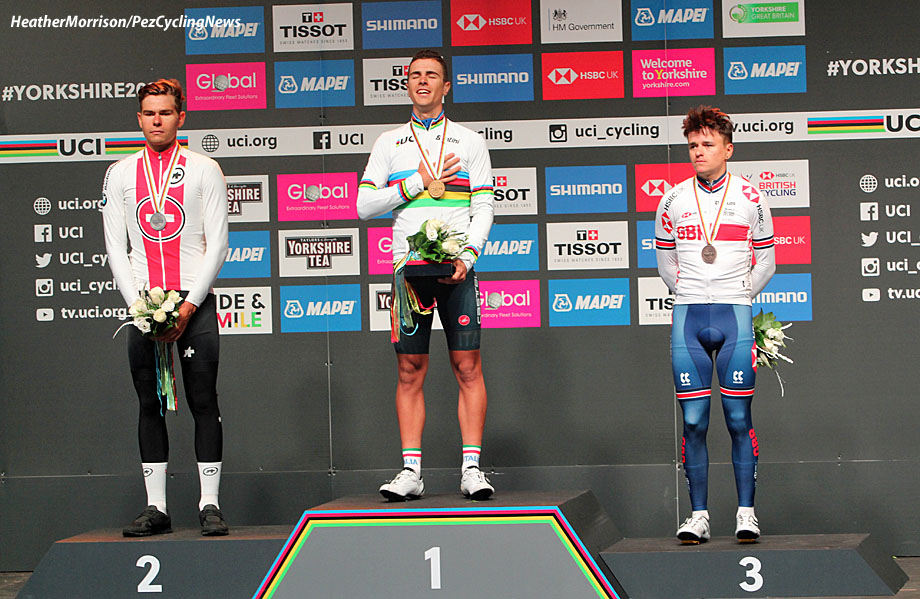 You’d have to say he was happy

More from Heather to come…