Roadside Worlds: PEZman in Italy, Alessandro Federico, was facing the bleak situation of a no ‘Race Chase’ season, but the ‘new normal’ rearranged season gave him the 2020 World road championships on his doorstep. It would be rude not to go ‘Roadside’. Here is his photo gallery of a day in Imola. 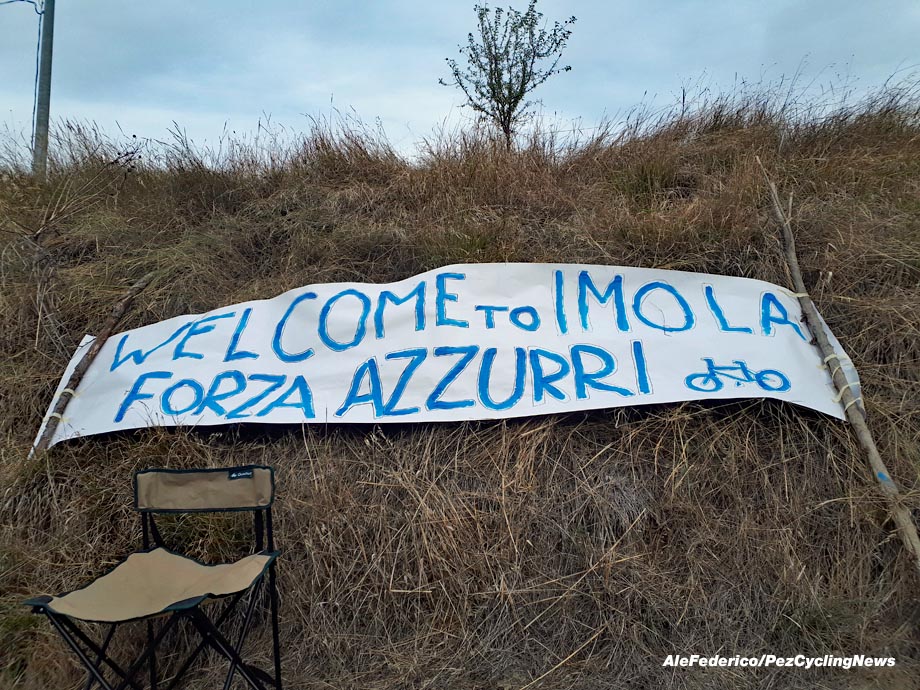 Welcome to Imola, “Forza Azzurri”. The locals cheering the Italian squad which doesn’t have a big favourite

This event came unexpected a month ago: I didn’t hope to have World’s so close home (less than 100 miles), but when UCI decided to host Word’s week (4 days in fact) in Imola I started to dream about the day of the road race, my favourite. So that last Sunday I drove towards north west to the Romagna region and I spent an entire day walking up and down the streets surrounding the small town surrounded by vineyards and sweet hills. 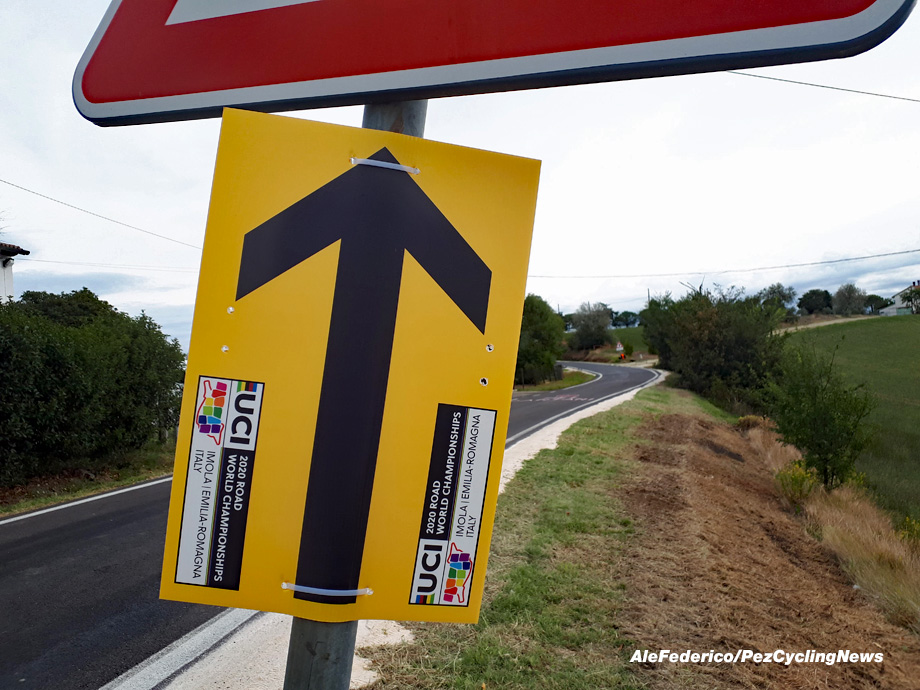 We all now who’s the winner and how he did it, but my aim here is to take you over there, beside the people and, yes, by respecting social distance. 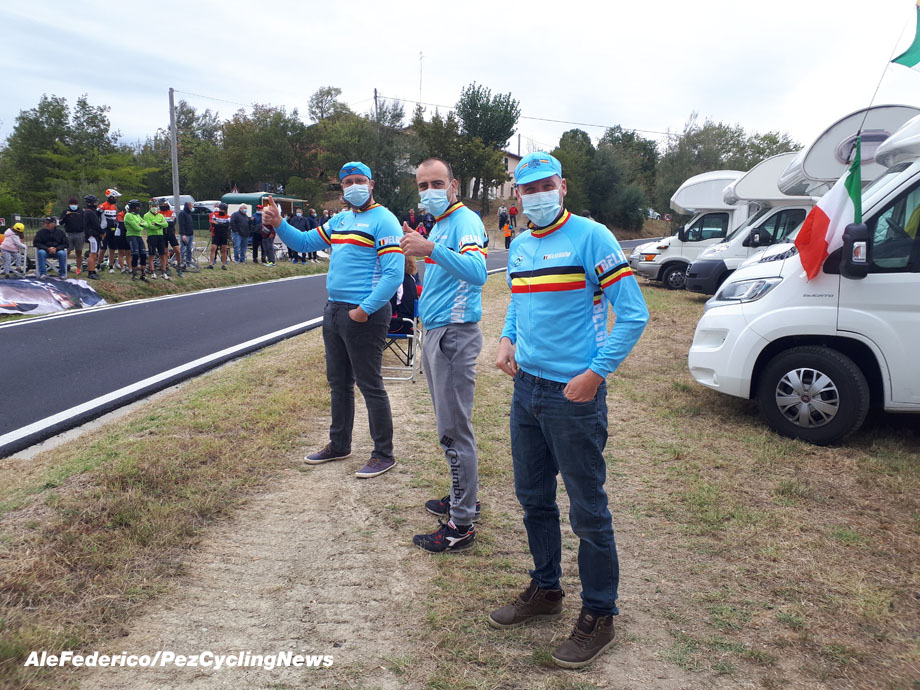 Some Belgian fans perfectly equipped for the big day of “their” Wout Van Aert. His was the most repeated name on the road the morning of the race 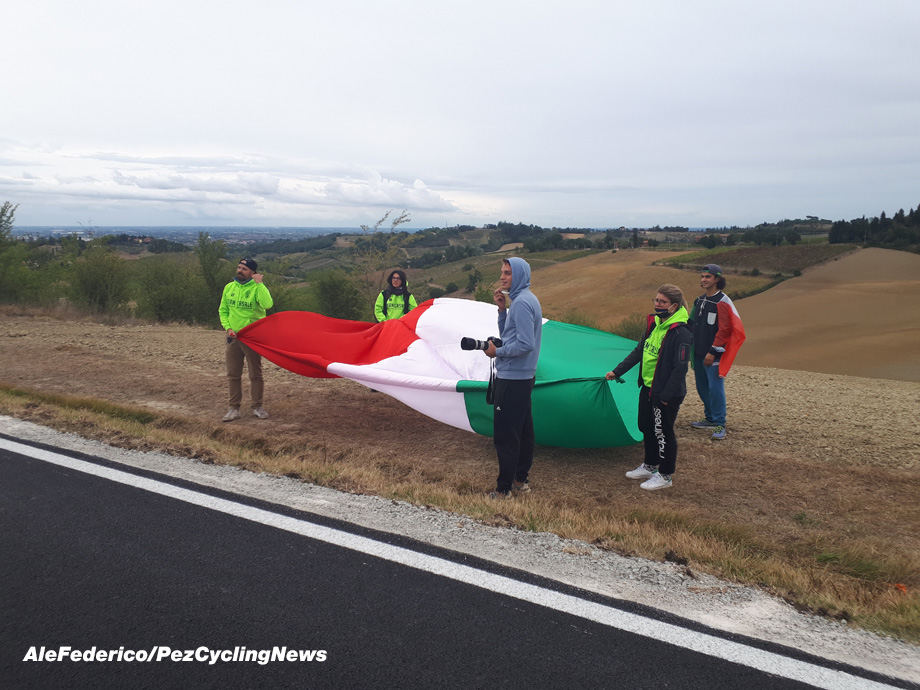 Italians couldn’t miss the opportunity to show the flag: these fellows were “negotiating” a picture with an official photographer but they were also in doubt how to be spotted by the helicopter camera on the next lap

My last contribution in PEZ was a very sad piece the day after the Italian Government decision to lockdown my region to prevent the spread of the covid-19, the so called “red zone”. That area lasted a couple of days and then we had the entire nation in lockdown. Those were very sad and terrifying days. 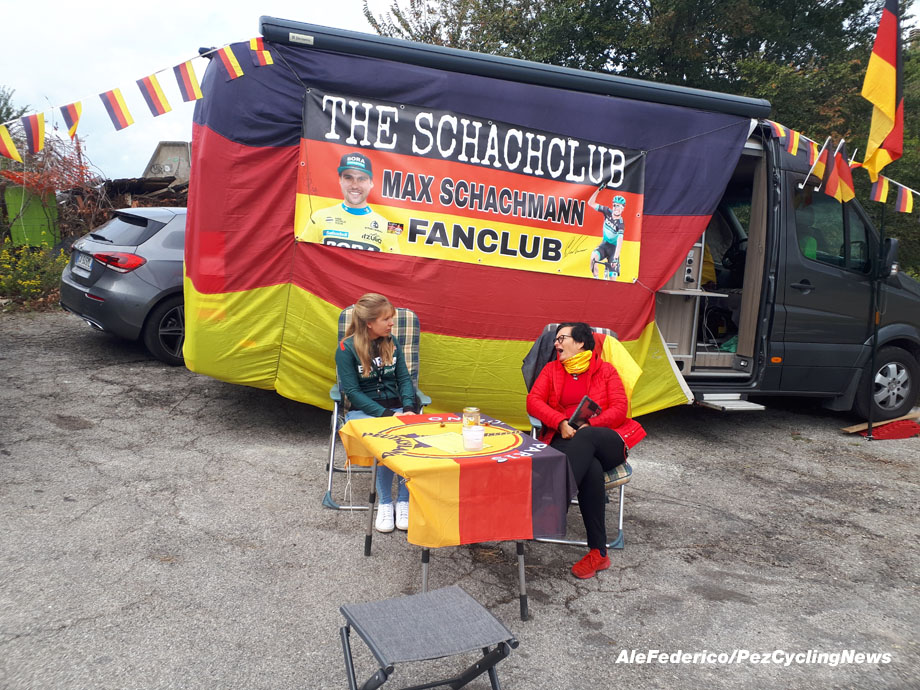 There was the “Shachclub” in the first row waiting for the race. In fact the Max’s wife was there (not in picture) to support her husband (finished 9th at the end) 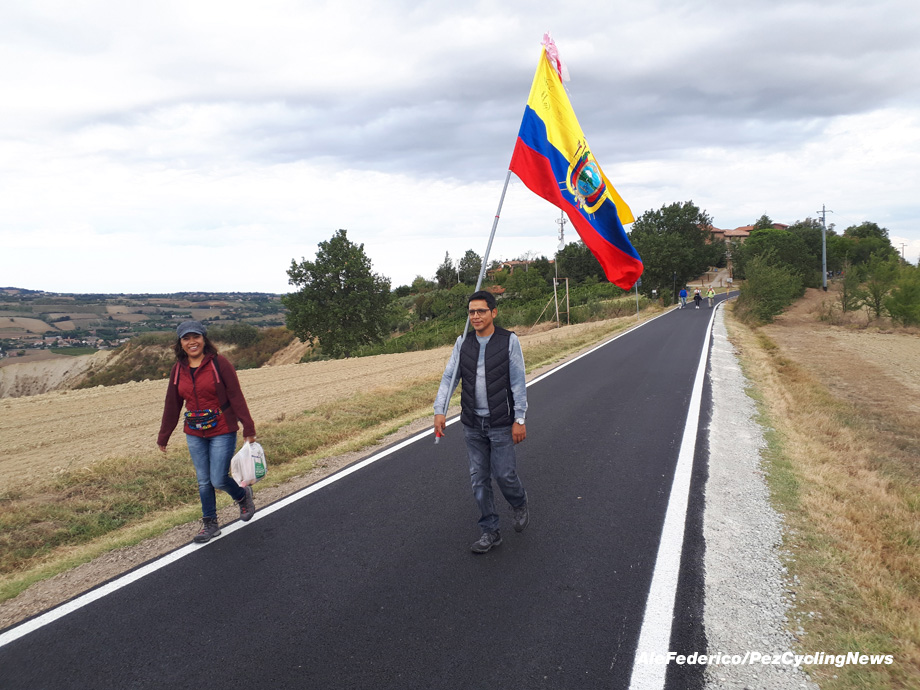 We, as cycling fanatics, were also losing all the best of the Spring Classics. Strade Bianche was the first big cancellation. Only after some days I realized that cycling was not more important because we were fighting for our own health. I forgot my bike for about 70 days – all of them the same – and I had my first day out (walking) of my home on 4th May. The first thing I remember (and I never forget) were the empty roads and the posters fixed in February still there. Life was stopping about two months on this place of the earth. 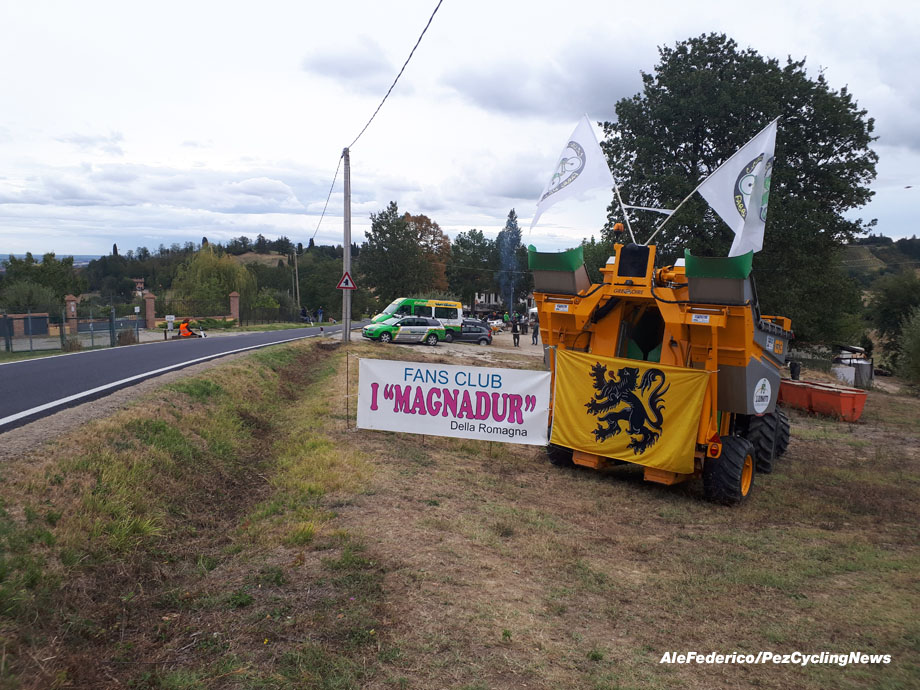 These “magnadur” fans were there with a full cycling team of local young talent; do not be confused by Flandrian Leon, they were local and “magnadur” is the local way to say “eat a lot”, and I will show you why (next pic) 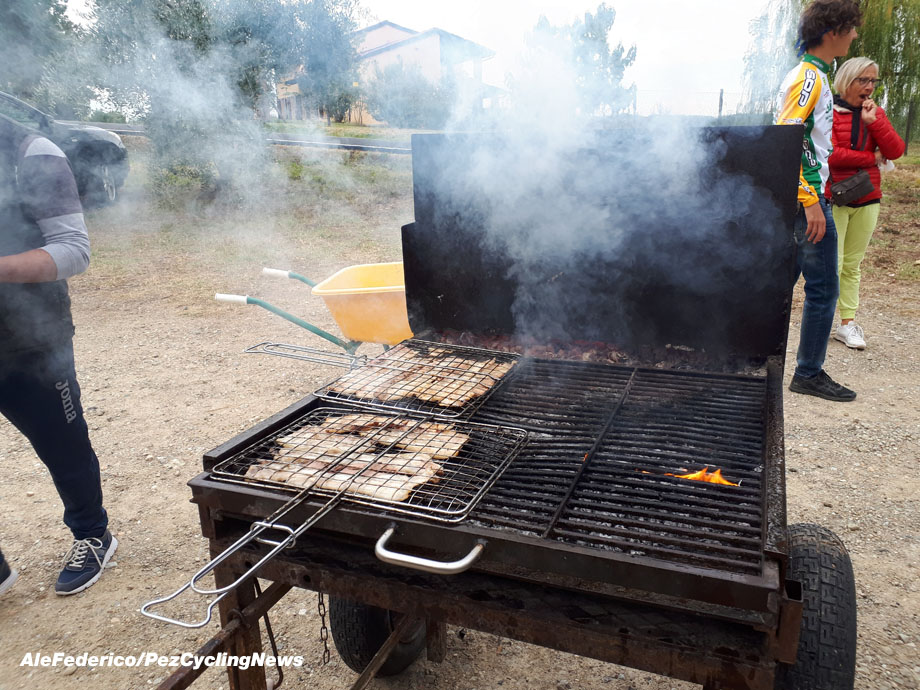 This “magnadur” fan club result of all their efforts to be part of the event: an almost ready fat pork bacon cooked on the grill and served in the local bread (piadina); each of the people passing by was leaving a donation and having one

So now each day out is a wonderful day. I don’t care more that much of what I could have better because the feeling of freedom comes first. I already had experienced the World’s in Firenze 2013 but this time was very different. Much less people and fewer nations but, anyhow some foreign people were there. Some of them living in Italy but there were also people coming from abroad, especially Belgians. Everything was quiet but also happy, there were breaks to social distances but not that many as I saw last summer at the beach. 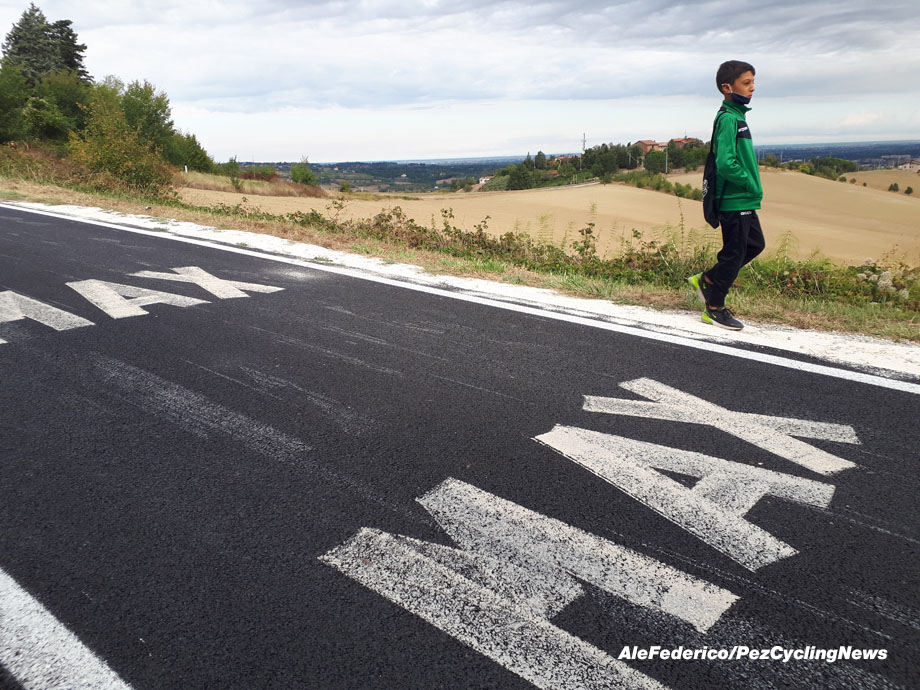 The ‘Schachclub’ was supporting Max quite heavily 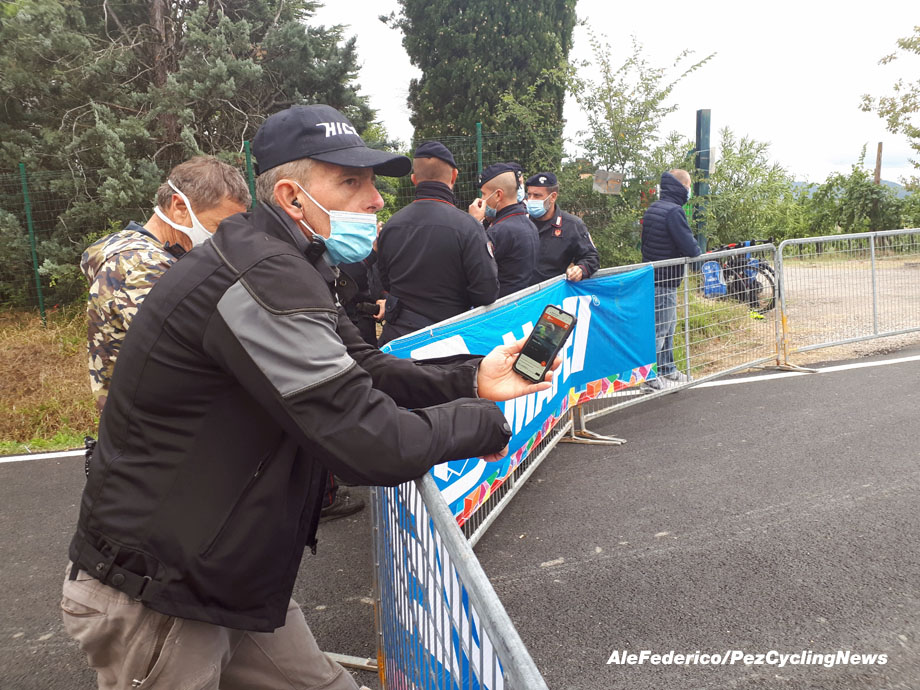 All fans were following the race on mobiles or tablet. Are very far those days when people was trying to catch race-radio to get some info

I avoided the hills and I stayed most of the time on the downhill, the last one for a couple of reason: I wanted to catch the winner riding solo to the end (yes, I was betting a solo-winner), and I wanted to avoid lot of people around me screaming like hell. Even the rain was waiting till the end of this day, allowing the race to finish without a drop on the hill around Imola, so that we could see an exciting finale without umbrellas. My day out was over and was really fine, even if the race wasn’t exciting at least until final 3 laps when France started to push seriously. With a lap to go it was Pogacar trying his fortune but the man of the day was “LuLu” with a well deserved triumph. This rider finds his best wins in our country, and we welcome him, because he is a true champion. 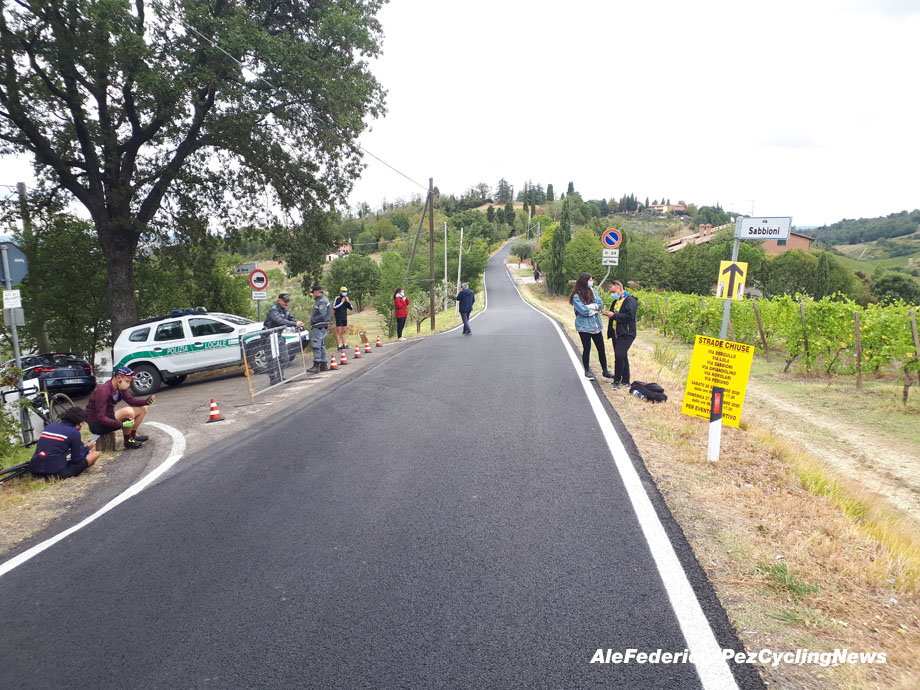 The organisers were working pretty well considering so short notice. There were many volunteers supporting at any road access and social distancing was almost respected. I choose to stay on the descent because it was easier to avoid close contact

Another race done, another race becoming memories for the future. In this kind of year everything that comes is gold.  It didn’t rain until the end and just after the race started came a heavy downpour. All the night lasted the continuous cold dropping from sky. It could have been a miserable one under umbrella with lot of shivers, but instead it was a great day out breathing over the vineyards. Life is so surprising… 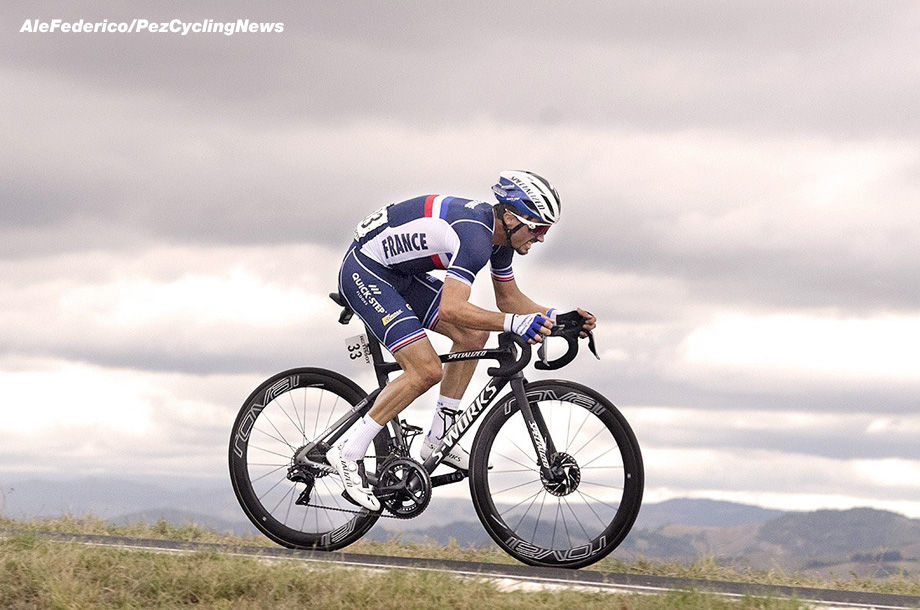 I was shooting Alaphilippe run to the rainbow on the final descent to Imola. I knew he was coming alone by the info received from other fans on the route and I decided to try all my chance to have him against the cloudy sky

# You can visit my Instagram profile to see some more shots of World’s (next days) or if you decide to have a wall painting of this picture at home ([email protected]). #

PEZ Goes to the Movies: My Year with GCN+