Alexey Vermeulen Video Diary: After driving 40 miles out of Tucson you turn left off Oracle HWY and onto a dirt road. At first you think you might have turned too early, but you haven’t, and the way you realize that you are in fact on the way to the race is by looking 10 miles in the distance to a white blur, a grouping of 2000+ RV’s, tents and cars… 24 HOUR TOWN.

I had no idea what to expect while going into Old Pueblo 24 Hour this year, my goal was to race my mountain bike hard without much stress. Making the transition from the road to the dirt is a big change and I was determined to enjoy my first race. 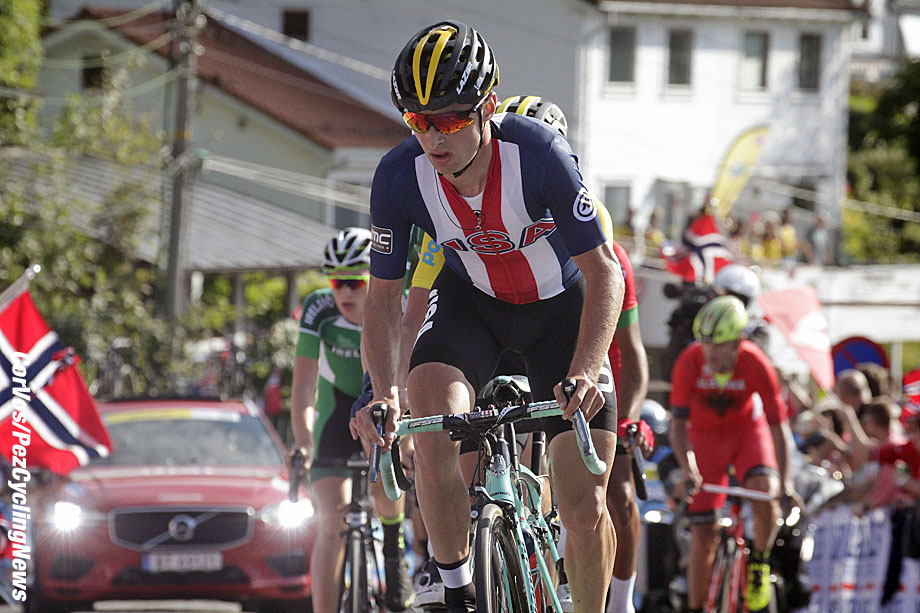 Alexey Vermeulen on the road in the 2017 Worlds

I had built my dream team. Scotty Albaugh, a friend from back home whom I had known as a runner during our cross-country days. He had won states the year that I was a sophomore and went on to run at the University of Michigan… the same program as Mike Woods previously ran with (so you know he is good). Needless to say, he would be our le mans start runner for the race. Next on the team was Curtis Zimmerman, an old friend who has been there for me whenever I needed to get some warm weather training in Tucson. He also happens to own one of the best coffee shops and roasters in the world: Presta Coffee and be a dang good bike racer. Third was Brian Meyer, I had never met Brian, but Curtis and he were good friends and it would turn out that he was the life of the party and our team…getting us through those wee morning hours somewhat sane. Last, there was me… team captain, motivator and attempted videographer.

We parked in our little site with an RV (proudly driven by riven by yours truly), and three cars. Curtis and I stocked the RV to survive the night and be the hotspot for friends to come and hangout. My favorite stat of the night was our collective ability to finish a 3 lb bag of gummy bears. We planned to build a fire, but got a bit too tired for that idea. I videoed as much as I could in an attempt to capture what it is like to race a mountain bike for 24 hours…

The hardest part about the race in my opinion is guesstimating how quick your teammates are going to ride the 16.5-mile lap because, you need to be in the exchange tent when they come in to take the small wood dowel that represents your baton for the day. I went to the exchange tent about 45 minutes (I expected him to take just under an hour) after Scotty had started, to allow for some relaxing and stretching before starting my lap. I was talking to friends about how “we are here for fun” and “just enjoying the ride” as Scotty comes flying in FIRST… I say good bye with a look of surprise and head out for my own lap. The night continues on in the same order as we start… Scotty, me, Brian and Curtis. There is something eerily amazing about racing through the desert at night. You are cloaked by the silence, reminded of the trails edge by the cacti and focused on getting back to 24-hour Town…these laps flew by for me. I tried to capture this feeling in the video that I made.

As day light returned again (14 hours later) our team was in 8th. We raced until the end finishing with 21 laps or about 344 miles ridden between us. We drank more than 25 coffees, collectively slept about 8 hours and only flatted twice. I finished feeling absolutely awake…yes, you read that correctly… this feeling passed as we drove home, but I had thoroughly enjoyed the race and felt like I had made memories for a lifetime.

Going into 24 Hours Old Pueblo I wondered to myself how does a race in the middle of the desert, without prize money, sell out in a matter of hours? Over the weekend I saw why. It’s a group of 4000 people living as we all should in daily life. Respecting each other as well as our planet. Crashed riders were helped without being blamed for ‘impeding the race’ (yes this happens), zero fights broke out, and no trash was left anywhere in the town. People recycled, and the Ranch where the course is set continually invites the race back because of this exactly – leave no trace.

We all have our beliefs of what a race should be and what it entails…I am not writing this to convince you, but one thing I do know is that I will be back in 2020 when the races comes of age…

Alexey Vermeulen was US National Junior Road Race champion and has podiumed in the U23 and Elite US Time Trial championships. After three years with the BMC Development Team, Alexey was signed by the Dutch WorldTour team; LottoNL-Jumbo. After two years riding all the WorldTour events and the World championships he moved back to the US to ride for the Interpro Stradalli team. Since the start of 2019, Alexey has turned his hand to mountain biking.

PEZ first met up with Alexey as a neo-pro at his first training camp. Then he spoke to us about the Dauphine in 2016, and most recently his move to the Interpro Stradalli team for 2018.

Ride Across the Pyrenees in 12 Stages