With the 2020 Tour de France still fresh as one of the most unexpected in years, and the 2021 route just revealed, it’s never a bad time to dream of great days ahead.  Stage 18 of next year’s Tour will be epic as riders leave Pau enroute to climb Luz Ardiden after summiting the mighty Tourmalet – one of cycling’s hallowed and most revered ribbons of road.

The race has climbed it from both sides on 87 occasions, I’ve climbed it once (from the shorter eastern face.  But one guy who’s done this ride almost as many times is Allan Reeves – who owns France From Inside cycling holidays and runs cycling tours in the south of France. His most epic trip – the Cross Pyrenees from Coast To Coast adventure – of course takes in the Tourmalet, and one of his guests captured the full descent on video.

Watch this video of the full descent of the west side of the Col du Tourmalet.

TOP RIDE: The first time I rode the mighty Col du Tourmalet was also the last time I rode the mighty col du Tourmalet. But that one ascent and descent remain a vivid memory – even some 16 years later. So when Allan Reeves of FranceFromInside Tours sent me a video of him riding the full descent of the Tourmalet’s west side, I knew it was time to dig into the vault and relive my own day riding over the highest paved pass in the Pyrenees.

It was 2003, very early days here at PEZ, and I was covering the Tour de France for the first time as officially accredited media.  That coveted green badge was the most difficult in cycling to obtain, and even more so for an upstart website publisher with no background in journalism and no contacts on the inside. 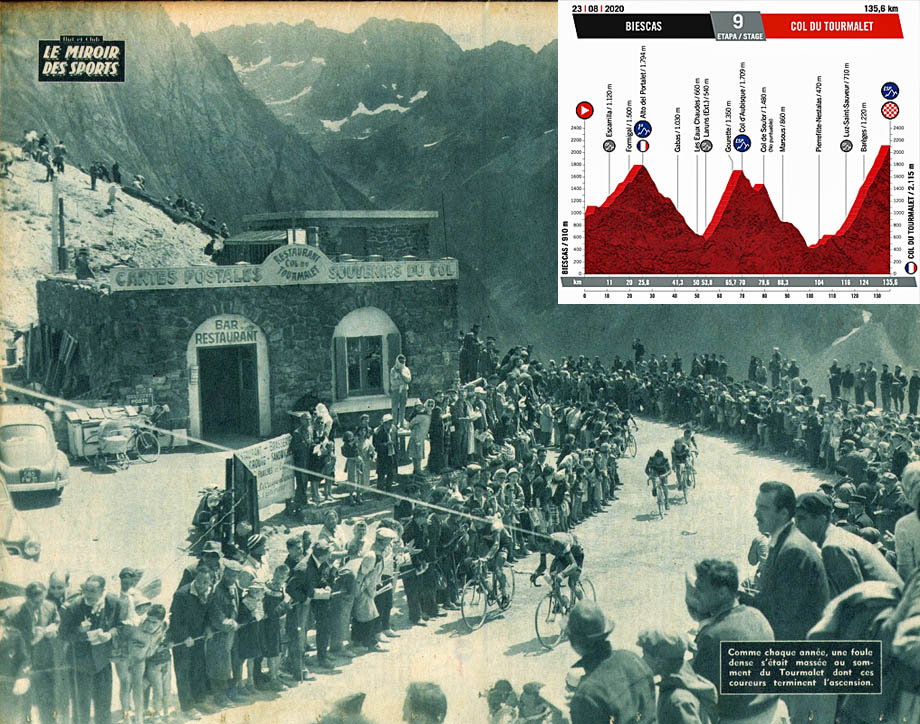 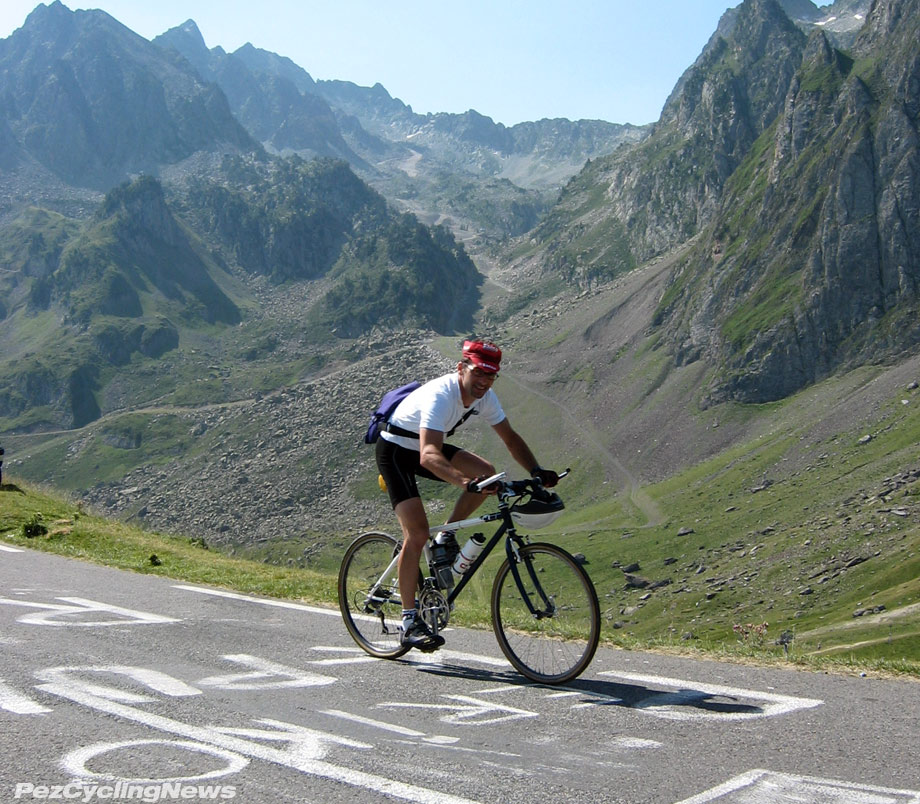 That’s me.  Lost my glasses around Alpe d’Huez a few days prior, so was reduced to wearing my spectacles for riding, and had cut the top out of a Saeco cap to fashion a cycling “visor” to beat the heat.  Full marks on the “Dorkometer”. 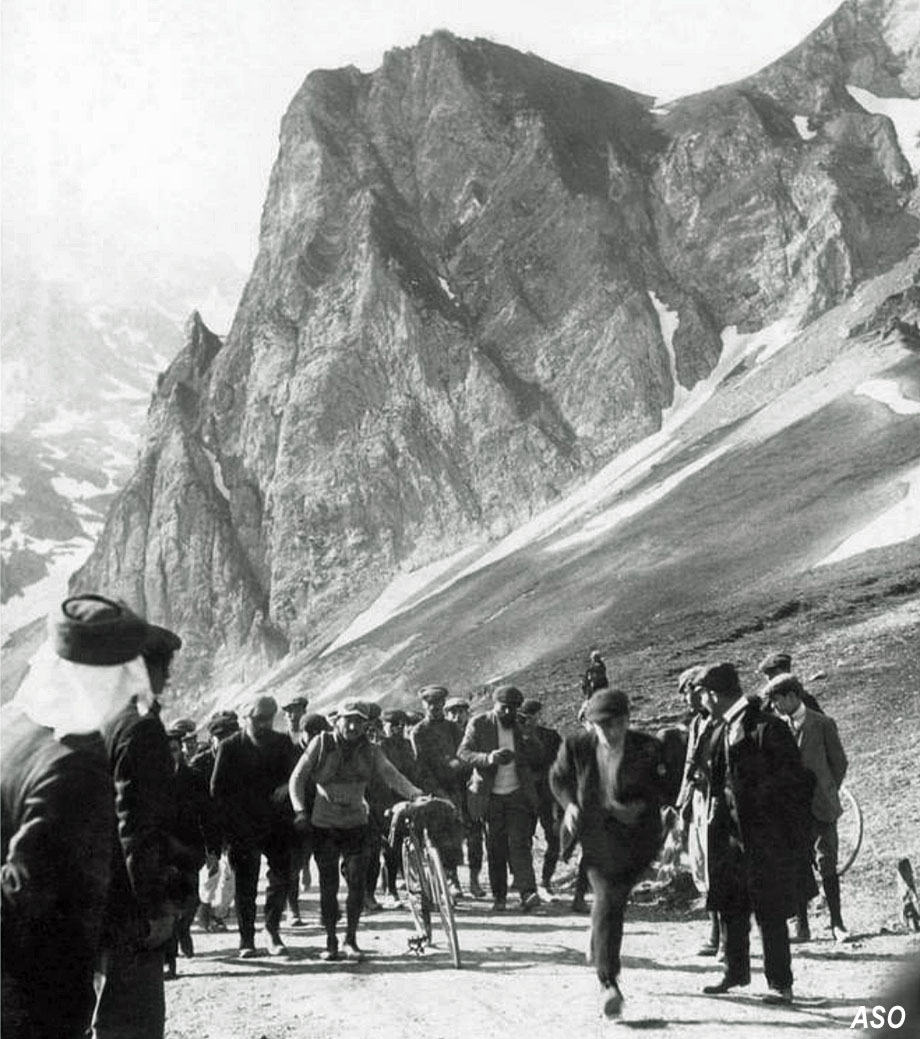 The Tourmalet was first used in 1910, when Oscar Lapize was the first rider over – and shouting “Assassins!” to the Tour organizers.

But there I was – for two week in July during what was one of the hottest summers on record – it was around 40C degrees most days – and people were literally dying across Europe from the heat.  Aside from my limited writing credentials, I also had even more limited funds – so every expense was cut back to the bone – I rented the cheapest car I could – the model without a/c – so chasing le Tour across the Alps and Pyrenees with the windows down was like living inside a giant rolling blow dryer – hot, noisy, and exhausting.

Watch this rare video of my first foray as media at Le Tour – and tiny car I chased the race in.

To further save on expenses, I’d traded advertising space on my small website with two companies offering cycling trips to Le Tour -and since I didn’t even own a road bike back then, I slicked-up an old mtb frame and off I went.

Lance was at the height of his powers back then, and North Americans were just starting to discover cycling vacations at Le Tour.  To further set this stage – this was also a time when daily Tour coverage at home was still hard to find – and daily tv coverage in North America – Fuggettaboutit. 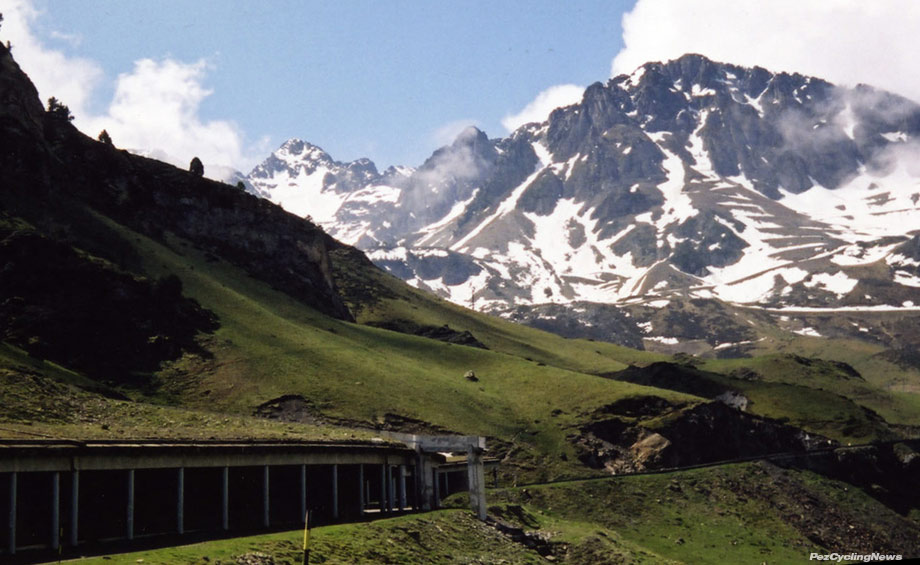 The tunnels on the east ascent signal you are getting into the high country.

So I’d prescribed my own mission as one of covering a side of the race no one had seen before – that of the fan’s perspective.  And PEZ ‘Roadside Reporting’ was born.

I’d joined the race in Lyon – heading straight to a stage finish upon landing from my overseas flight and a 9 hour time zone change, then drove straight to Grenoble and a few days in the Alps and a stop at L’Alpe d’Huez – but that’s a story for another day.  From there it was south to Provence, and then east to the Pyrenees, before point the car east again for a 3 day journey back to Lyon for my flight home. 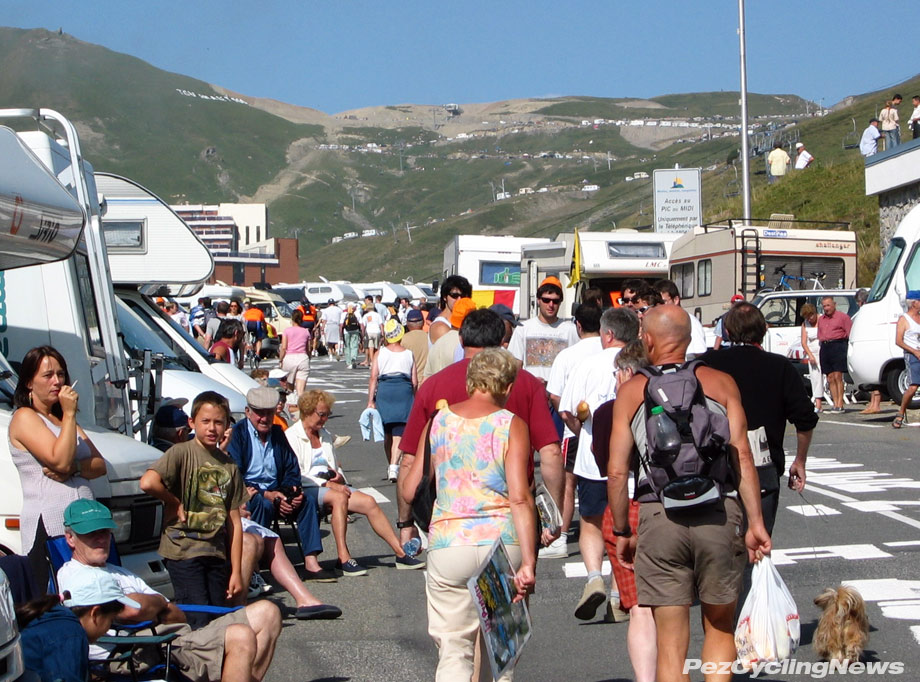 Fans in La Mongie, with the summit in the distance.

The queen stage of my swing through the Pyrenees was a ride up and over the col du Tourmalet, from east to west.  Although we were staying in Lourdes – perhaps the weirdest place I’ve ever seen – we van shuttled over to Bagnere-du-Bigorre to make a 70km point to point ride for the day and see the race go by. 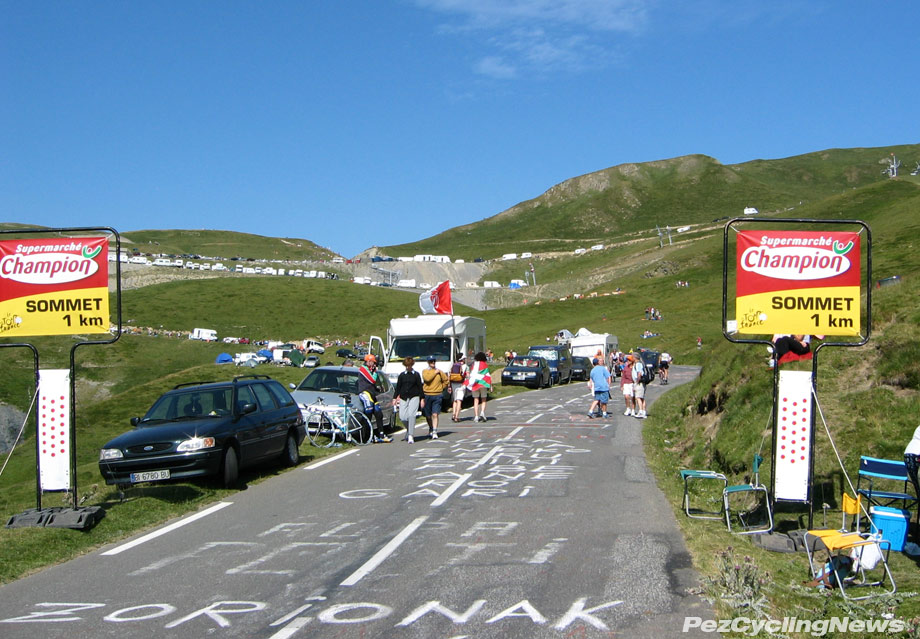 The road to the Tourmalet from here is uphill all the way – albeit it very gently for first 15km, with the final 11-12km to the summit getting into the 8-9% range to the summit at 2115m above sea level.  While the Tour has climbed the mountain from both sides, I consider this the easier of the two, as the descent from the summit to the west is long – around 19km to the bottom proper then another 20km of gentle dropping along the valley floor to Lourdes. 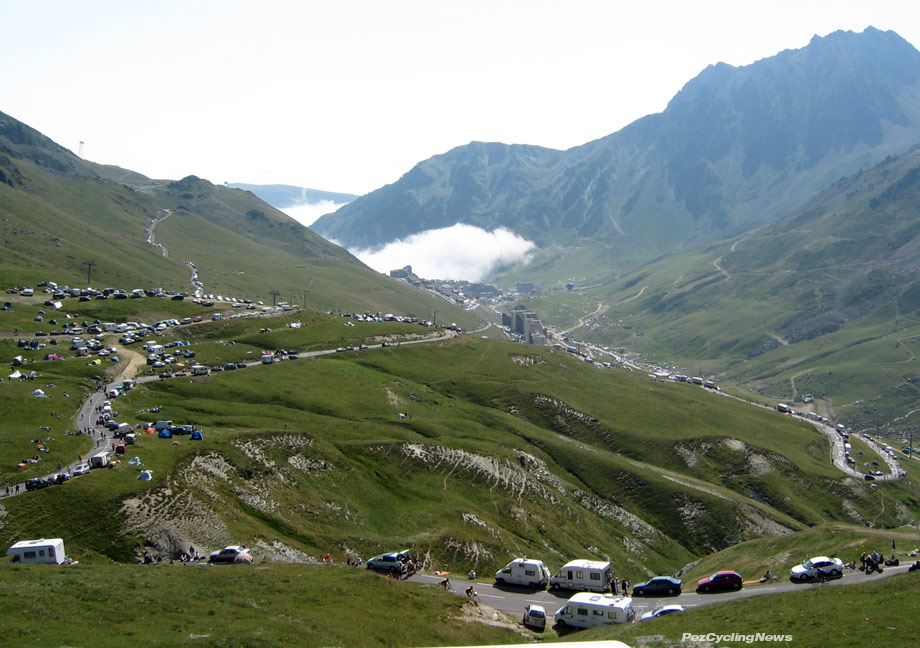 View back down to La Mongie from the last kms of switchbacks.

Long climbs tend to be epic because of their length – but the fact that so much of the Tour has played out here over so many years, that pedalling the Tourmalet is as spiritual a connection one can have with our sport.  The lower slopes from the east are through the forest – with no views  that I recall – except that you are riding through rural alpine France – which is view enough for many. 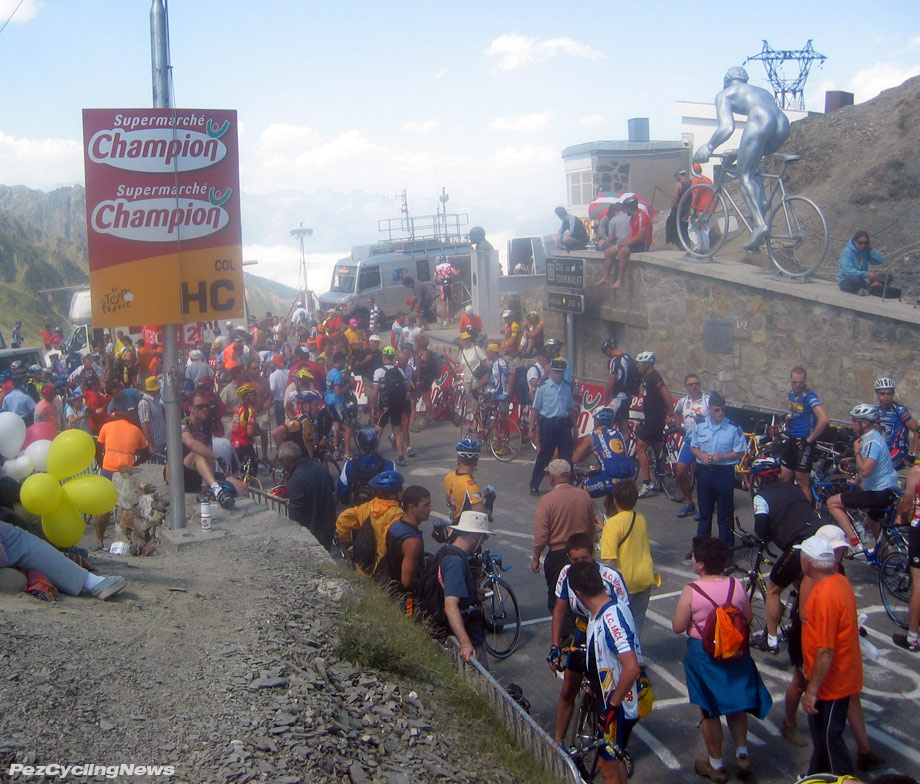 Made it to the summit – and dig that “HC” marking on the banner.

There’s a left-handed switchback about halfway up where the grade picks up and the terrain starts to change.  A couple kms later and the trees thin as you climb into the high alpine, and then come the snow tunnels a couple kms below the ski station of La Mongie – a typical European ski resort built up in haste in the 195o’s and 60’s  – ie: ugly communist block looking buildings, and a distinct lack of character. 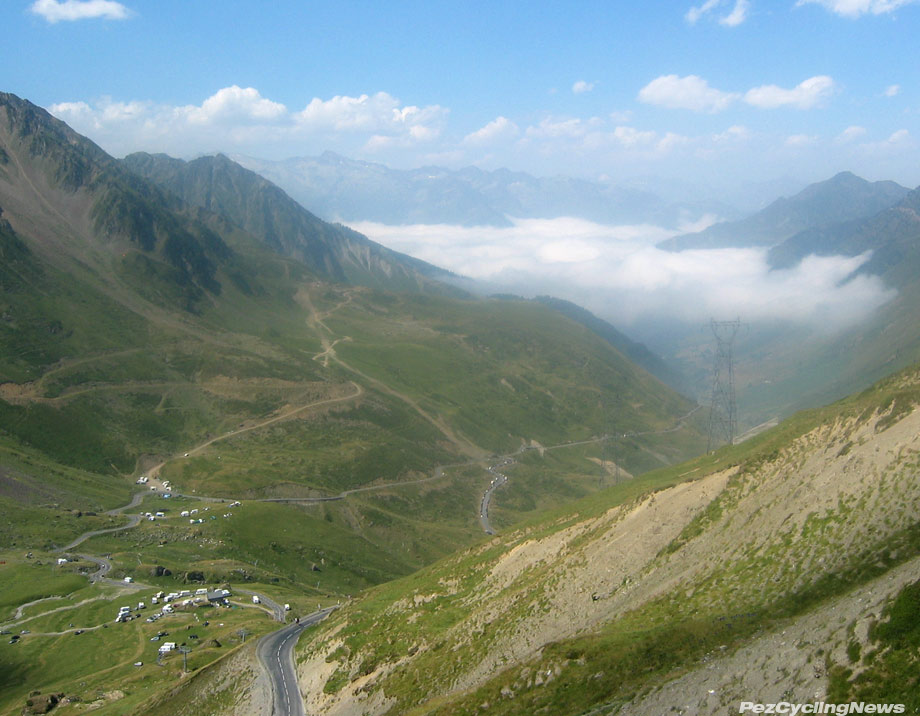 Looking west with much of the descent layed out before you.

But from here you can see the summit some 5km off in the distance, and the road ribbons and switches its way higher.  The road this day was crowded with fans arriving early to see the race, and there was a strong wind closer to the top.  The last kms reward with some gorgeous views back down the valley to la Mongie, but you need to keep moving because the weather can change fast. 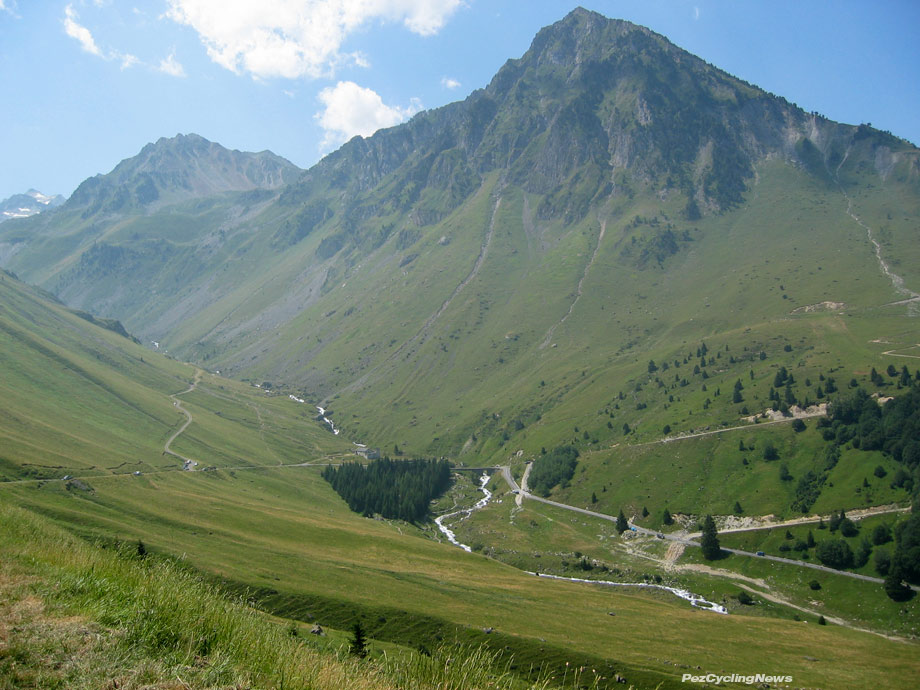 I made a point of stopping on the way down to snap some pics – not knowing if or when I’d pass this way again.

It’s not uncommon for the summit to be shrouded in misty clouds – and in fact my day was one of changing conditions from sun to clouds and back.  It was for sure a lot cooler up here, and the summit was crammed with fans clamouring over each other to get the obligatory shot undo the statue of Oscar Lapize at the top. 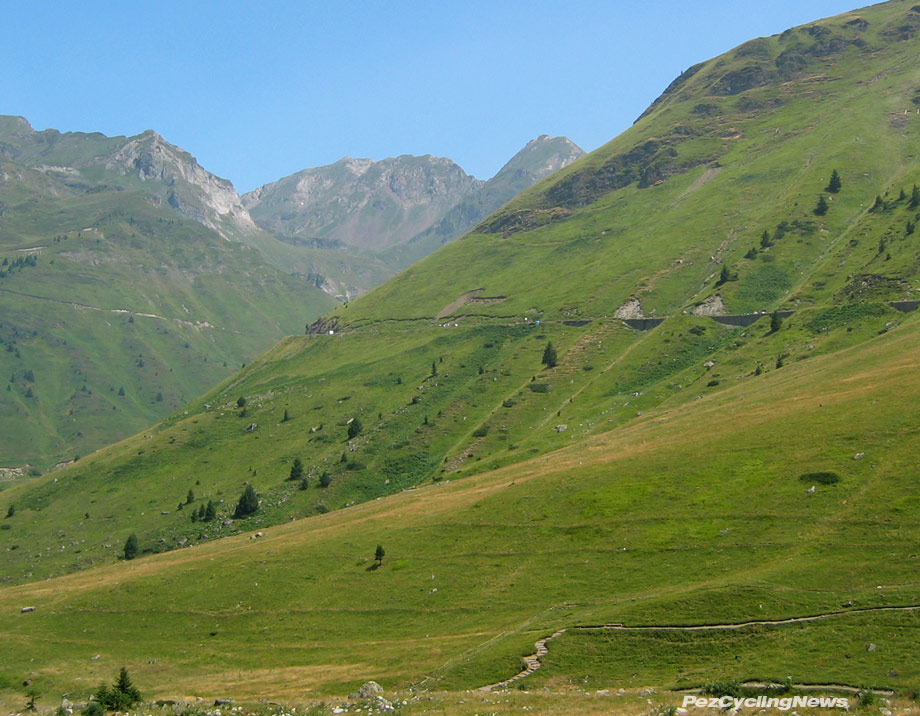 I highly recommend a stop in the restaurant there too – we stayed for lunch and I recall a delicious plat du jour – my favorite of all the French meals – that warmed me up – along with a cool beer – as I anticipated the descent ahead with my group.

Jackets were donned, and we set off to take in the descent on the now closed roads, looking to see the Tour pass after their own ascent and drop in the same direction as us. 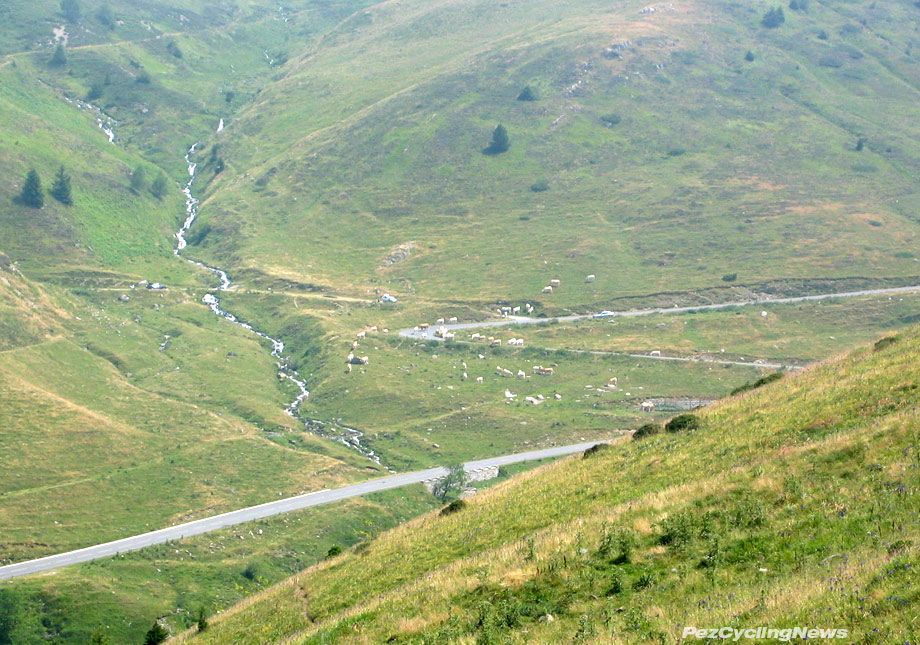 The descent is fast, and with no guard rails – there’s real danger at hand, as one PEZ fan noted on our Youtube page.  It’s really a great descent, much more interesting than the climb up from the other side, as the road twists and turns, switches back a few times, and passes through a few postcard perfect French towns and past disinterested cows.  It’s typically Pyrenean. 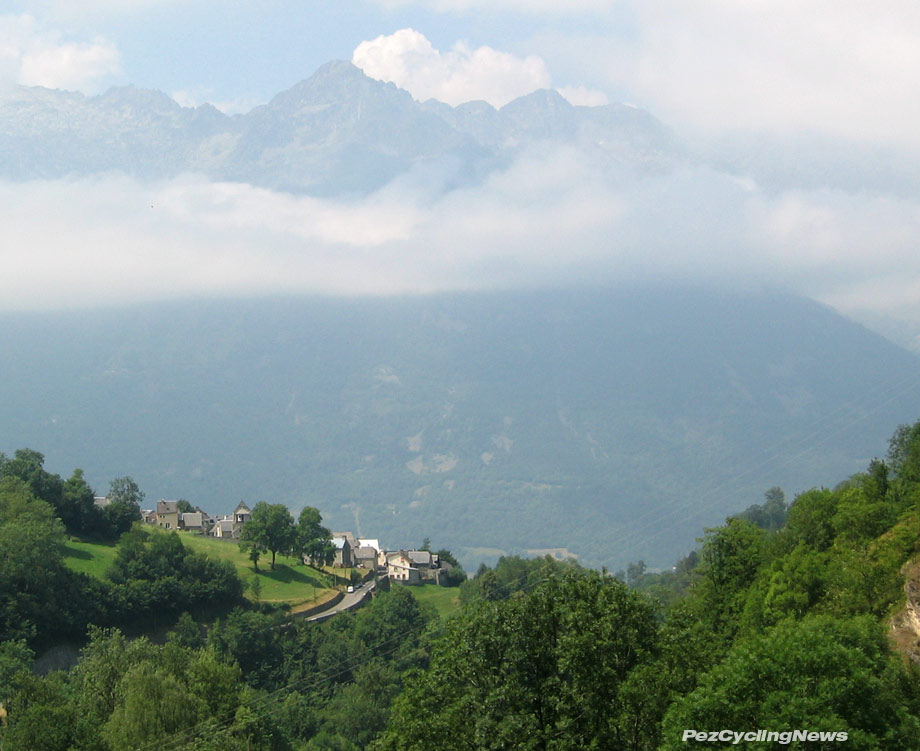 The road is fast, the views are stunning, and riding it your self is the only real way to appreciate it’s grandeur, beauty, and danger – but that’s what make life worth living – doing things the remind me thatI’m still alive.

Riding in the region is bucket-list material for any self-respecting cyclist.  Consider a guided and supported trip with a company like FranceFromInside cycling tours.  Owner and lead guide Allan Reeves was born in France, but grew up an American citizen in California – and knows his way around the region probably better than many locals. 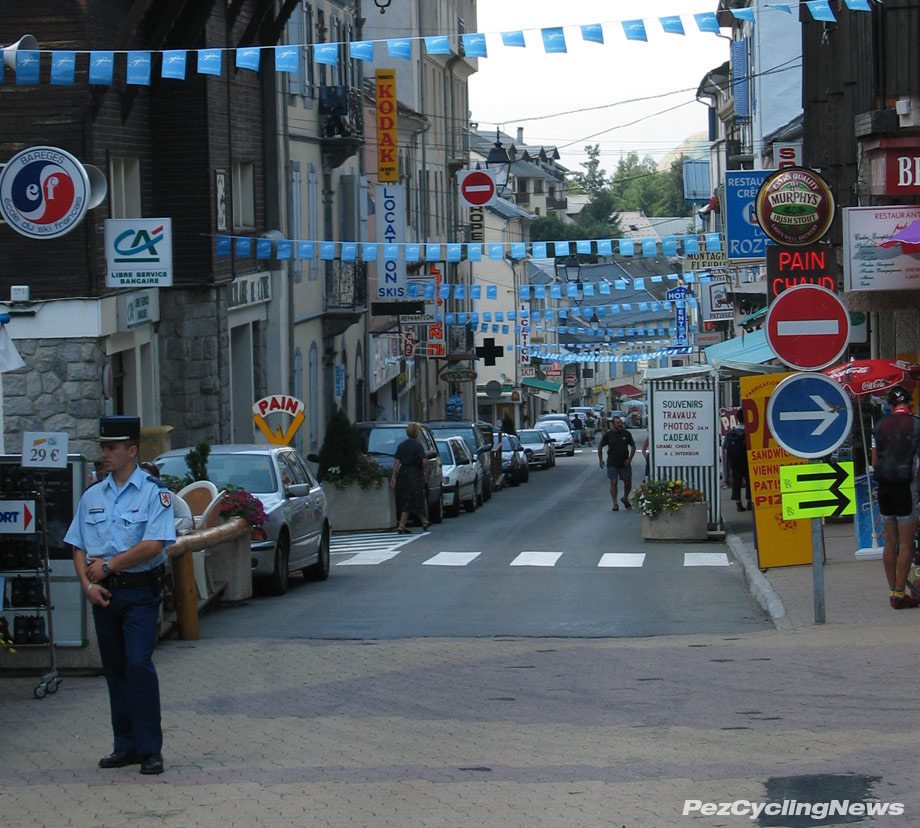 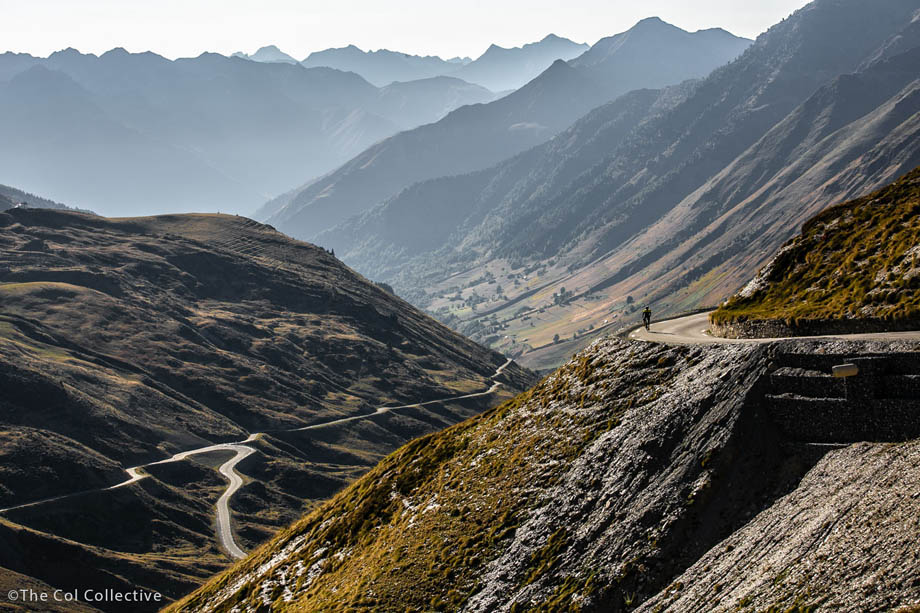 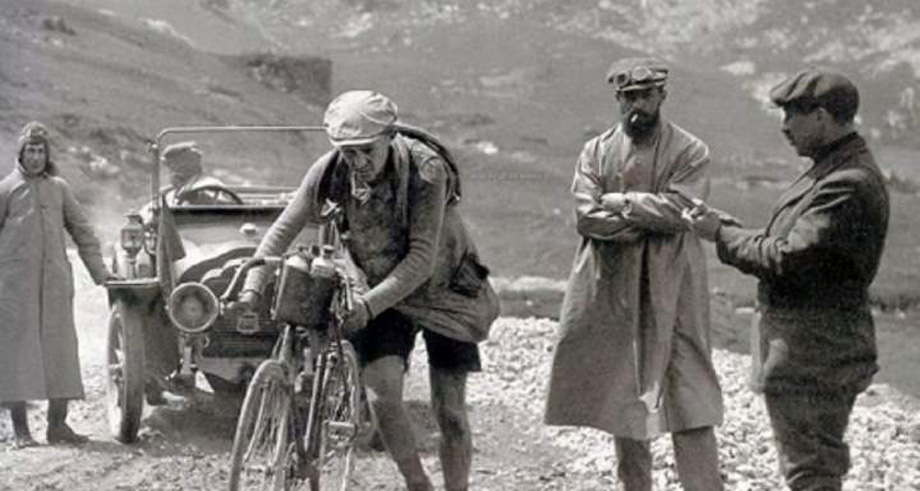