The guys at DeFeet love their music (founder Shane Cooper has been playing in rock bands for years). They also love looking at cycling and cyclists beyond the surface – because you gotta look a little deeper to see the really cool stuff. So they made a short film with Tom Boonen, Brian Holm, and musicians Michael Ward, Mike Dimkich & Mike Malinin talking about how music weaves into riding our bikes.

RIDE. RUN. PLAY. Athletes and musicians sharing common bonds.
DeFeet is passionate about sports like cycling and running. We also like to combine them with music. So much so, in fact, that we soon realized we were surrounded by athletes and musicians. The surprising part was not that these people were crazy about their chosen careers. That was obvious. We discovered they were just as mad – if not more so – for the other pursuit. Athletes playing music and musicians doing athletics. Everything suddenly became even more interesting.

DeFeet Films went in search of answers. We followed these athletes and musicians as they went about their business. Follow along with us and get to know some of these characters. We’re sure you will find some common bonds, too. We hope you will share what they are with us as we go along.

Celebrating a great epoch of cycling history.
Episode 1 includes some time with a very special person. We say person, because while he’s a cyclist by profession, Tom Boonen is a world class gentleman first and foremost. Even in the face of a massive growing stardom, his kind demeanor toward others never wavered. DeFeet had already been stomping to victories in the Spring classics for nearly a decade when our socks first landed on Boonen’s feet. Since he began as a professional in 2002, he took us along for the rides. What rides they were, too.

When Boonen puts his 16 year pro career to rest on April 9, 2017 at the end of Paris-Roubaix, he finalizes one of the greatest careers witnessed in cycling. Were he to win this last Paris-Roubaix, there would be no debate about the greatest cobblestone rider of all time. To us, it doesn’t matter. Boonen is the quintessential modern master of the classics. Year in and year out, he applied himself the entire season. For many years he was able to put in shockingly brilliant Spring racing, and still come away with the green jersey at the Tour de France in July.

Racing will bid farewell to Tom Boonen in April, but we doubt Boonen will hang his wheels and head to the pub in Belgium. No, that’s not how the next 20 years will go down. He will be there, somewhere. Probably in the background, but still strong and dapper as he heads into middle age. This Classics man will always show the class. 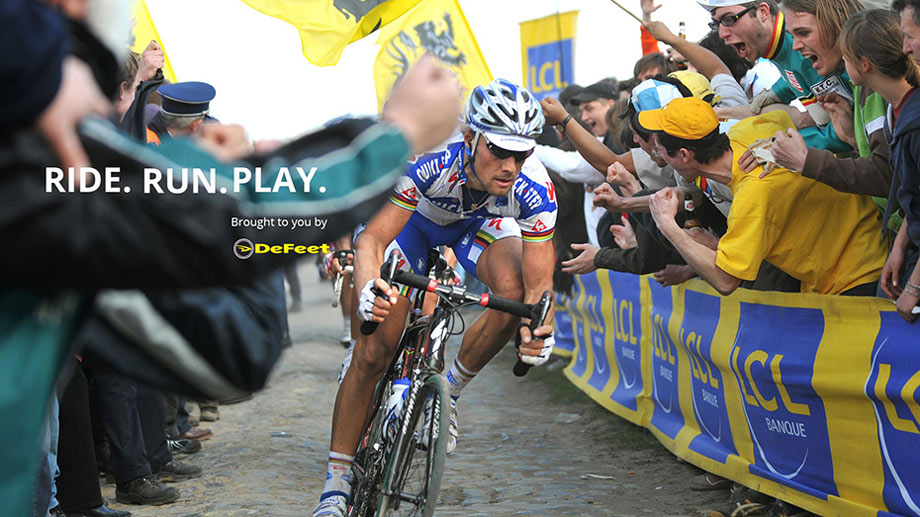 Tom Boonen sluicing through a section of stones in the 2008 Paris-Roubaix. We love this photo because it captures the chaos and passion pulsing through this corridor. Boonen’s face showing calm, chiseled determination. Imagine the noise. The roar, the horns, the bells. Just look at the expression of those fans as the gendarmes on the left cave in to the power of this moment. The Lions of Flanders wave overhead. This is it. This is crunch time and the type of pressure applied by Boonen at these sections in Paris-Roubaix has been enormous. Monumental.