After an exciting World Cyclo-cross Championships battle and the start of the Ladies’ Tour of Qatar yesterday (Tuesday), Gordan Cameron takes a look at the ‘Top Ten’ women for the 2015 season. Marianne Vos is not at the top of his list, so you might be surprised with the line-up.

Not that long ago, some would argue, the ability gap between the top women’s riders, especially between Marianne Vos and the rest, was so vast that it was best measured using zip codes. Vos is still, arguably, the best all-round rider there is, but now the margins are narrowing. As the Tour of Qatar begins, here’s a personal and arbitrary look at the top women’s performers of 2014, and a few pointers about what to expect this season.

1- Pauline Ferrand-Prévot
Notionally employed by the French ministry of defense, PFP had one of those miracle seasons where almost everything she touched turned to gold … or rainbows. If you factor in that she escaped more or less unscathed from the Rabo Women’s horror World’s TTT crash, she had a little bit of luck go her way, too.

Would you be happy with a year like this? French national road and TT champion, French cyclocross champion, a solid trade team season alongside Vos, Van Der Breggen and Van Vleuten for the Rabo women, and topped off with a canny World road title. Yeah, you probably would.

Add the above to winning La Flèche Wallonne on the Mur de Huy and holding off a stellar field to take the Emakumeen Euskal Bira, and she can do pretty much anything.

Oh, and she just won the Cyclocross worlds. The bright new star of women’s racing? Yes, and selfishly for us, she’s not yet 23 so we can look forward to many more epic performances. 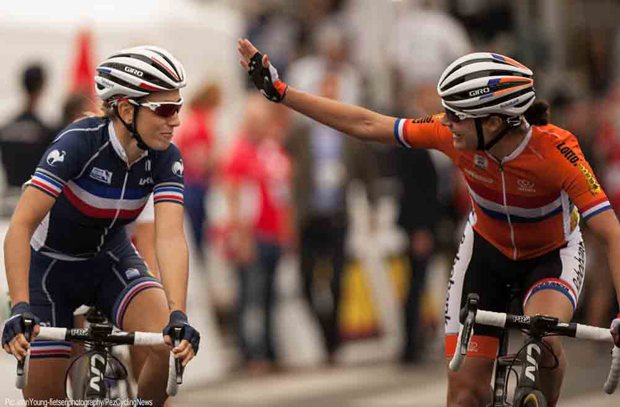 2 – Lisa Brennauer
The popular and genial German missed a golden sweep of World Championship medals by a hair’s breadth. She was one of the key motors in the Specialized-lululemon TTT squad, then backed that up with the ITT win before coming up just short against PFP in the road race.

Any time there’s a battle against the clock, Brennauer is right in the mix and she took eight wins in the discipline in 2014, including her World’s results and the German national title. Sticking with the rebadged Velocio-SRAM squad, the challenge will be to apply her against-the-clock prowess to the most suitable World Cups. 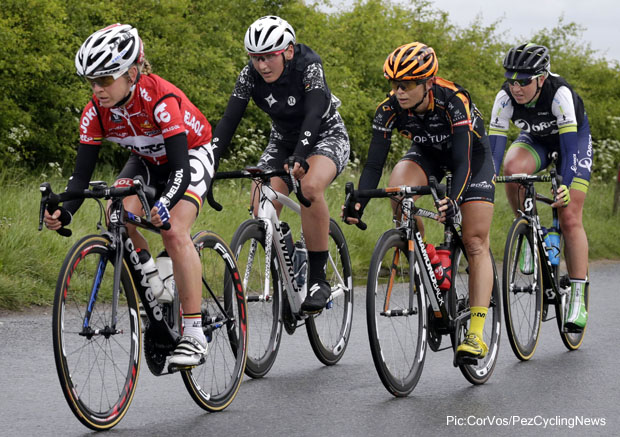 3 – Marianne Vos
Does it seem harsh to relegate Marianne Vos to only third place for her 2014 season? Yeah, it probably does. She’s still the beast and the best on the bike, but when she sets such high standards for everyone else to match, the slightest glitch reads like a failure.

She still took a staggering number of road victories (26 if my maths is right) and finished as world number one, but tenth in the World’s Road Race leant the season a disappointing color.

However, there was a major caveat in that Vos was doing so much away from the road: mountain bike, winning the cyclocross world title again, and getting involved in the political machinations which are belatedly towing the women’s sport to where it should be. With scores to settle in 2015 and the Rio Olympics not far away, Vos should not be written off. 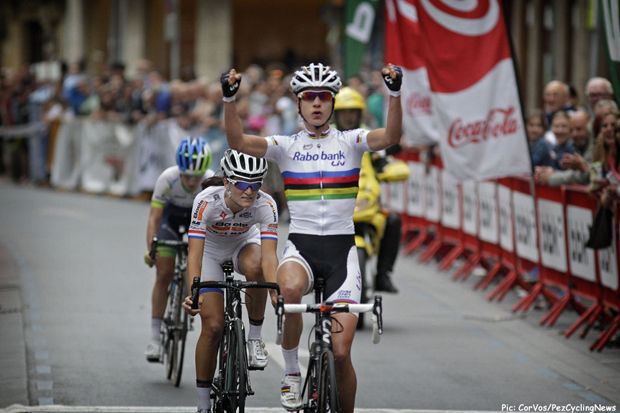 Another win for Marianne Vos

4 – Emma Johansson
It might be suggested that Emma would swap a little of her phenomenal consistency over the last few years for a couple of really big wins. There’s no doubt that she is a class act over pretty much any terrain and 2014 was – measured against the average – a super season. A World Cup win at the Trofeo Alfredo Binda, a national titles double, stage and overall at the BeNe Ladies Tour, the Boels Rentals Classic.

But there was Worlds frustration, with a bronze after her late, star-studded four-up escape was swamped on the line. Lizzie Armitstead pointed the finger of blame at the Swede for not working hard enough to avoid a sprint. Ultimately, that was unfair criticism, and neither of them got what they wanted. So, for the Zingem-based Emma J, 2015’s targets are probably the same as last years – Flanders and the Worlds. 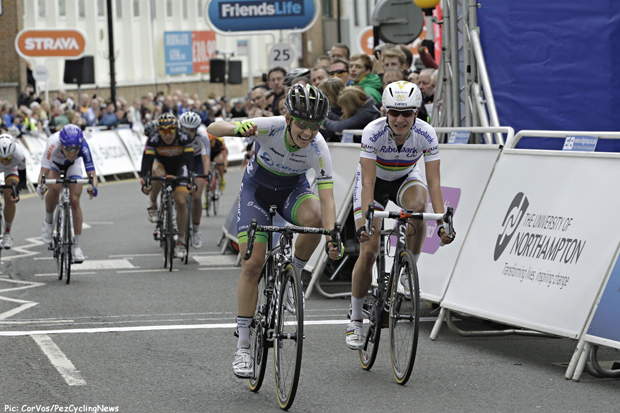 Emma Johansson winning stage 1 of the Ladies Tour of Britain

5 – Lizzie Armitstead
A 2014 season of phenomenal consistency saw Lizzie cement her place in the front echelon of women’s racing. She led the World Cup from start to finish after winning the Ronde van Drenthe, and then going 2nd, 2nd, 2nd, 3rd, 8th, 8th in the following events.

Under pressure, more from herself than from anyone else, she made a decisive winning move to take the Commonwealth Games gold in August. However, what could well spur the Yorkshire woman to greater heights in 2015 and beyond are last year’s misses. Eight other second places, and an especially frustrated fifth in the World’s road race should give her the fire to add to her palmarés. Still backed by a firepower-stacked Boels-Dolmans squad, we’re looking for more from Queen Elizabeth this season. 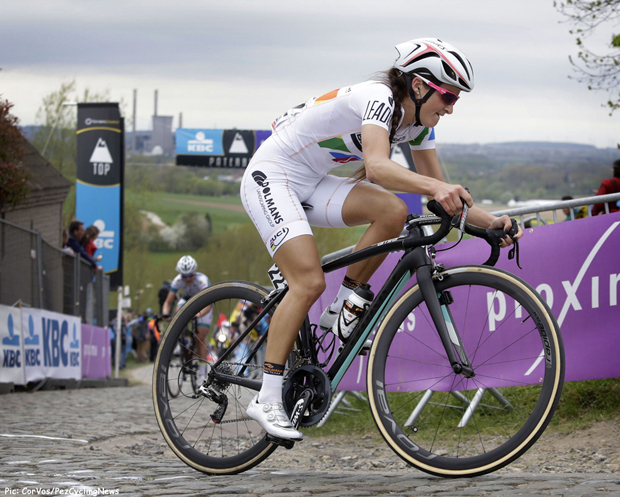 6 – Amy Pieters
The daughter of former Paris-Tours winner Peter Pieters made a breakthrough at the Tour of Qatar with a solo stage victory and second overall. Alongside her rampant team-mate Kirsten Wild, that was a damn good showing.

From the desert wind and heat to the chilly Belgian spring and the win at Omloop Het Nieuwsblad, Pieters went on to have a busy and consistent season right through. The challenge now is to step up with Kirsten Wild having moved elsewhere: Pieters has to take her own chances, help even younger talents like Garner and Mackaij, and support Claudia Lichtenberg when the need arises. 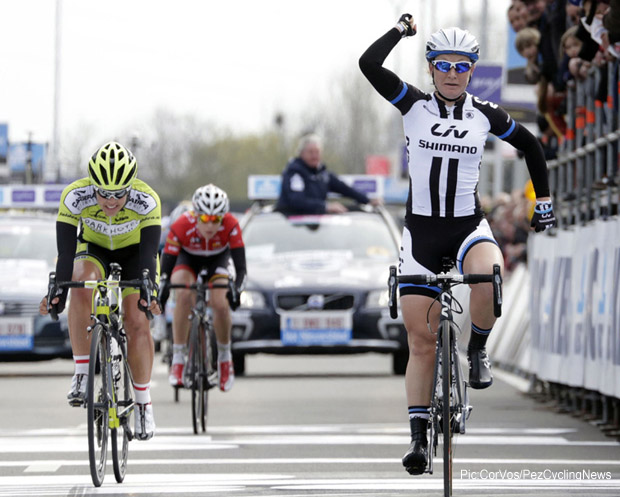 7 – Alison Tetrick
A guest spot with the Astana-BePink ladies led to the Californian ending up on the World’s podium with a TTT bronze. After a solid start results-wise with Twenty 16 squad, she went on a late season run against the clock with 5th at Chrono Champenois and 2nd in the Chrono des Nations.

Tetrick has already started her road season with a guest ride in the Tour Femenino de San Luis, taking a road stage and fifth overall. She’s smart, funny and media savvy, so follow her on Twitter. Hopefully, more results will come in 2015 and maybe the UCI might remember to get her name right. 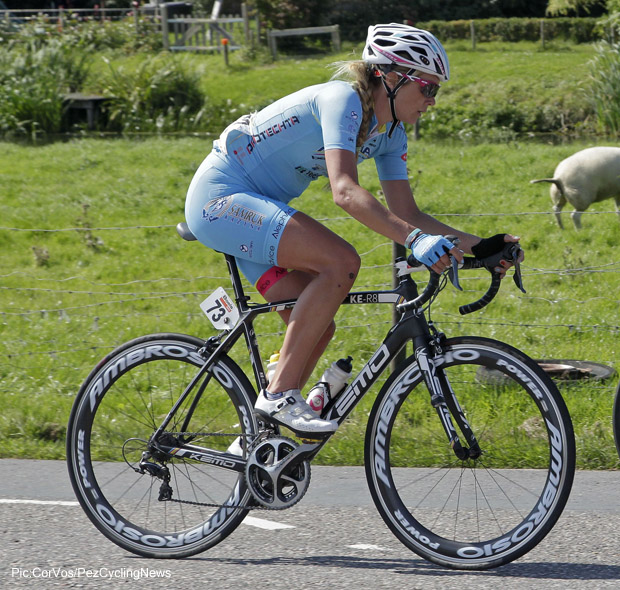 8 – Ellen Van Dijk
If you’re only going to score one really big win in a season, you might as well make it probably the best individual performance of the year. On a crisp, clear Flemish day, Holland’s Ellen Van Dijk gave a virtuoso recital to reduce the competition to a chasing rabble, coming home over a minute clear at the Ronde van Vlaanderen.

Ellen jumped approaching the Kruisberg inside 30kms to go, and when everyone else looked at Emma Johansson to chase, Van Dijk was gone. Pulling out the lead over Brand and Cromwell, she was solo over the Oude Kwaremont and suffering. The gap concertina’d in, and out again once over the top. Van Dijk just ripped it, through the noise on the Paterberg, and all the way to the line. A mighty win, well worthy of a top ten place for 2014. 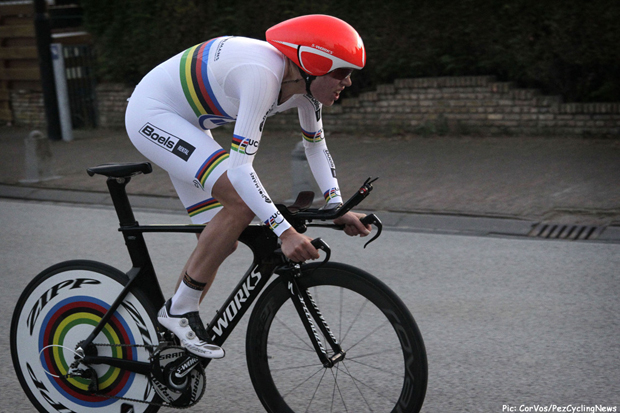 9 – Leah Kirchmann
A huge leap up the rankings for the Canadian, courtesy of road, TT and criterium national titles, and a great Redlands – two stage wins and a stint as leader.

But the major result was a break-through podium in La Course by Le Tour de France in front of a well-deserved audience. Her Optum p/b Kelly Benefits Strategies squad just missed a TT medal at the road Worlds, and it looks like there could be a lot more to come from Kirchmann in 2015. Still only 23, she crashed out of the Worlds last year but has time on her side as she looks to the Rio Olympics in 18 months’ time. 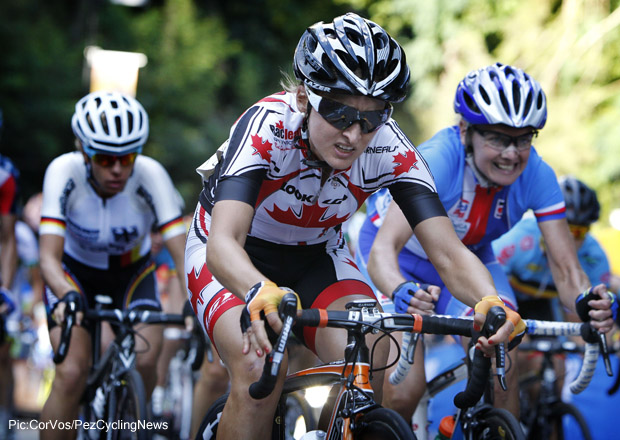 Leah Kirchmann racing for Canada in the 2012 World championships

10 – Emma Pooley
I was in Glasgow to watch Pooley steam to a silver medal in the Women’s Commonwealth Games TT behind Linda Villumsen. Roadside for the men’s event a couple of hours later, I saw Pooley politely wait for the road crossing to open between competitors, wheel her bike across the road and disappear in the direction of Glasgow’s Merchant City. Completely untroubled by any fan attention. This situation needs to change: Pooley’s been one of the most successful and influential female racers of the last decade, and has made probably a greater contribution in the corridors of power. She and others deserve the recognition.

Also in 2014, Pooley won the national ITT and three stages of the Giro d’Italia Femminile, including holding off most of the Rabo Women single-handed. And the crazy thing is, even if she’s now a successful duathlete/triathlete, she could conceivably turn up on a suitable road World’s course and still challenge any time in the next three or four years. Yep, she’s that good. 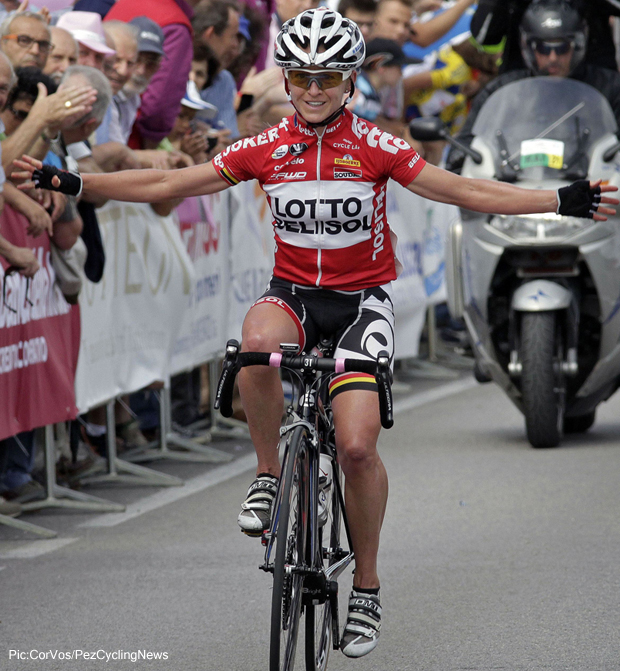 That is Gordan’s Top Ten pick for 2015, but with the growth of women’s racing at the moment there are bound to be some new names in the female peloton. 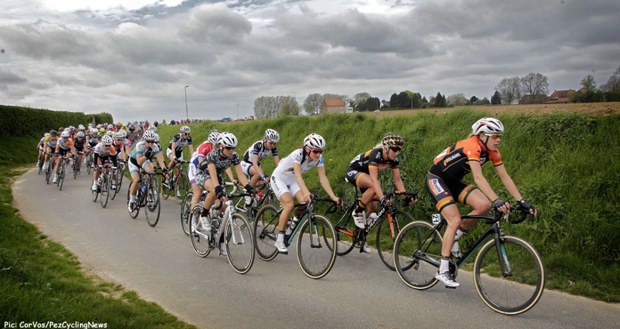