2018 World Track Championships Round Up!

World Track Champs’18: Between Ed Hood’s trips to Belgium for Het Nieuwsblad and watching Strade Bianche on TV, he has also had time to keep one eye on the UCI World track championships in Holland. Ed gives us the full run-down on who was hot and who was not and the equipment at the ‘Rainbow’ championships on the boards of the Apeldoorn velodrome. 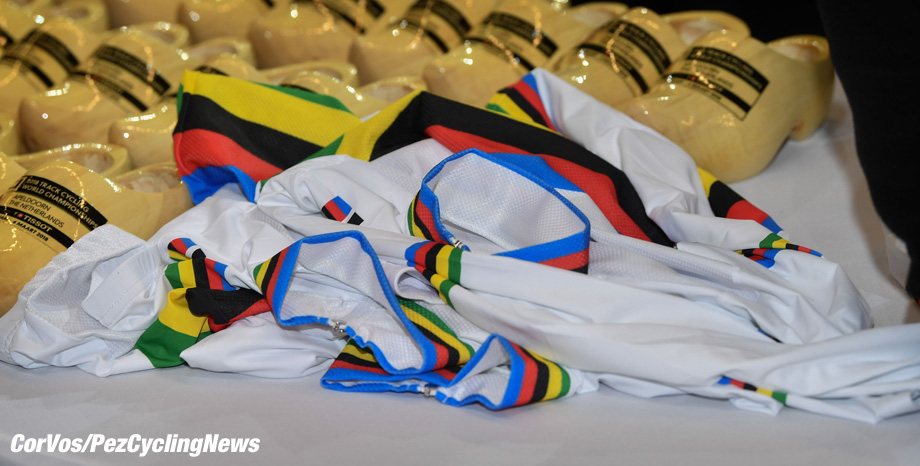 Lots of ‘Rainbow’ jerseys on offer

The World Track Championships, no longer do we anticipate the road ‘greats’ riding the pursuit or points – or the pro sprinters battling for the rainbow jersey which would bring big start money on the Grand Prix circuit. You’ll never see a GVA or Sagan on a track in this era and there’s no Grand Prix circuit – the World turns. . . 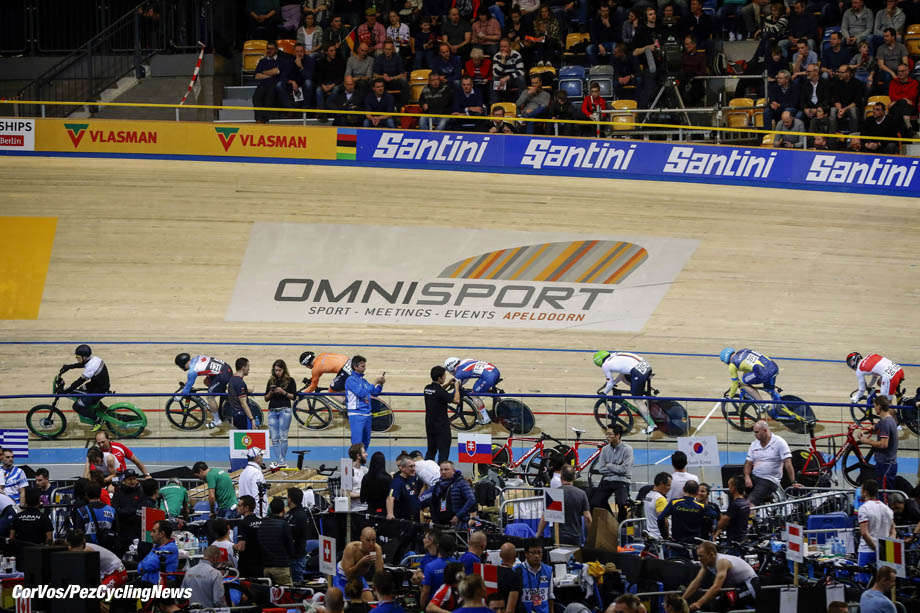 But if you love track racing then the Worlds is where it’s at; held this year on the neat – but not renowned as quick – bowl at Apeldoorn in The Netherlands. Despite its reputation as not being the fastest, the male sprinters were qualifying sub 10 seconds, Chloe Dygert broke the world record for the ladies individual pursuit and the kilometre podium was out of this world with all three medallists going under the magical minute. 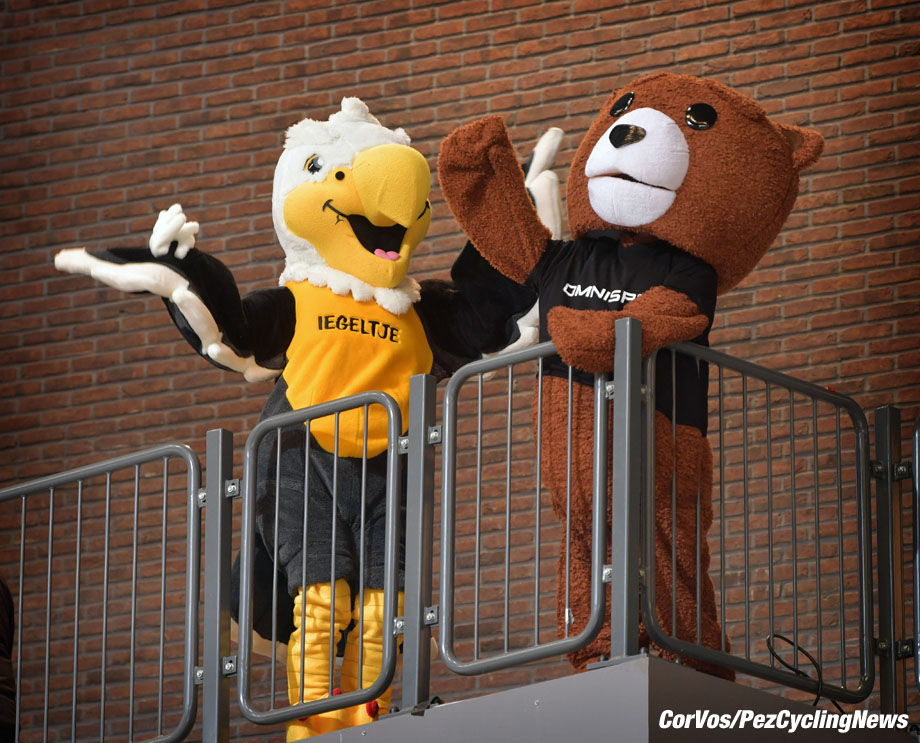 Not only Dutch fans

Before we think about who did what, let’s look at the ‘tech.’
The GB team pursuiters have moved from those UKiS (United Kingdom Institute of Sport) ‘stealth’ bikes, the brain child of Greek engineering maestro Dimitris Katsanis and into a collaboration with Cervelo. It’s hard to get anyone to say much about them – official secrets act and all that – but all agree that they are stiff, aero and fast. There were rumours that there all manner of sensors built in to them to aid British Cycling in their never ending hunger for data – but we didn’t tell you that. 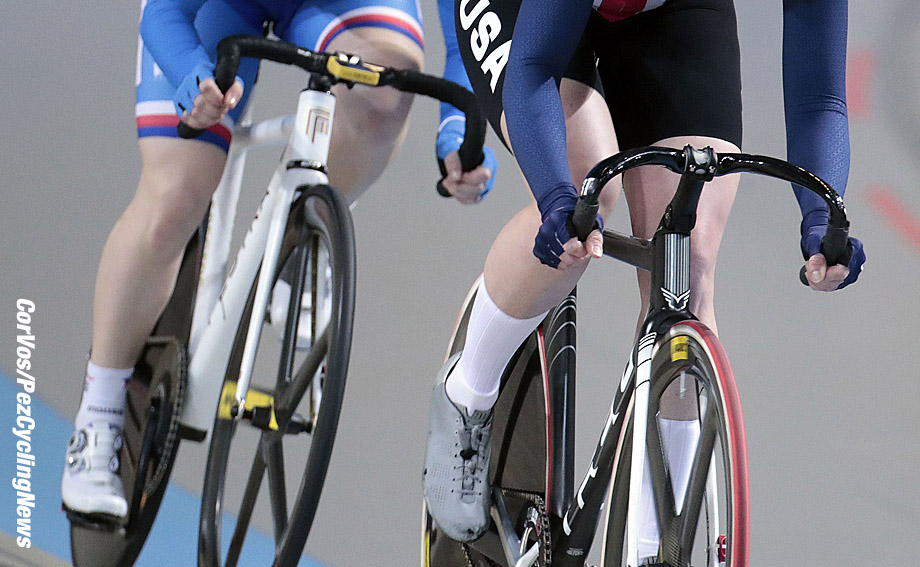 Wide forks on the Felt

The USA too have gone into collaboration with a major ‘aero’ pioneer, Felt – who have ‘thought right outside the box’ and placed the chainset on the left hand side of the bike. There’s aerodynamic theory behind this but the bike isn’t just about a left hand side drive train, the frame is asymmetrically designed to take best advantage of the perpetual ‘turning left.’ The hubs are narrow, the seat stays come in very low and the chainset is a Metron ‘solid’ model – all in the interests of wind cheating. Felt claim a huge 3.5 second advantage over a four kilometre team pursuit. 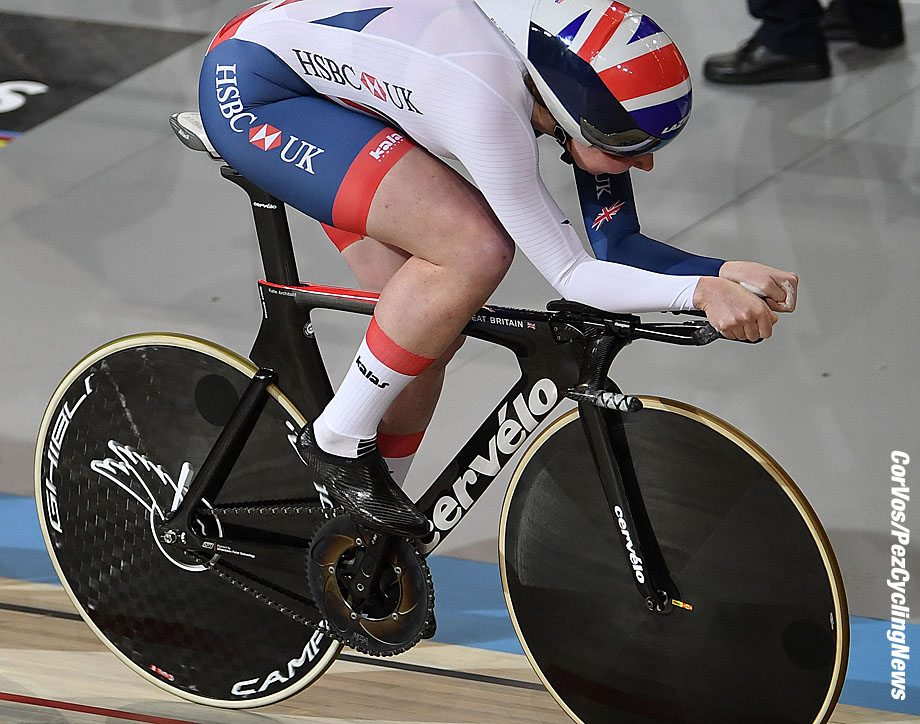 Both bikes also support the trend towards ‘super large’ chain rings, again it’s a feature no one wants to engage about but once the bike is rolling there’s certainly a ‘flywheel’ effect coming in to play with the big rings. We did notice however that Felt have gone away from their ‘over size’ fork crown design which allowed the air to pass through the crown rather than encourage it around the crown. It’s hard to keep up in the ‘aero arms race’ – Tokyo 2020 will be fascinating.

Many were using strange shape bars

Handlebars we note get ever narrower on the ‘aero altar’ – back in the 70’s and 80’s we all rode wide bars to ‘open up our chest for good breathing.’ Many bikes display very shallow ‘bars whilst GB have those super-expensive carbon ‘cranked’ jobs on their sprint and bunched bikes which place the wrists behind the ‘bar. 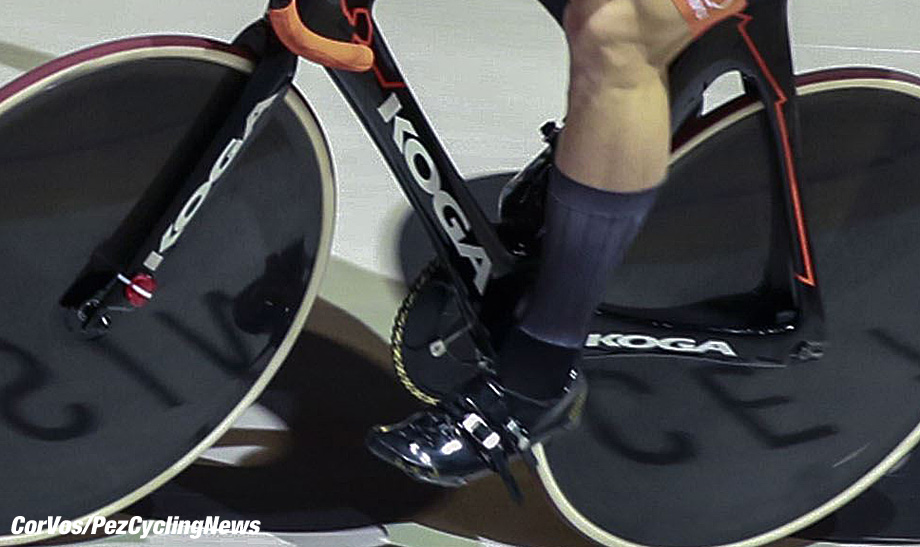 Those socks must go!

And it’s because new fabrics are better at cheating the air than skin that we have all those ‘soccer socks’ – when I head the UCi tech committee those are the first things I’ll outlaw. The wind tunnel may say, ‘fast’ – I say, ‘ugly !’ 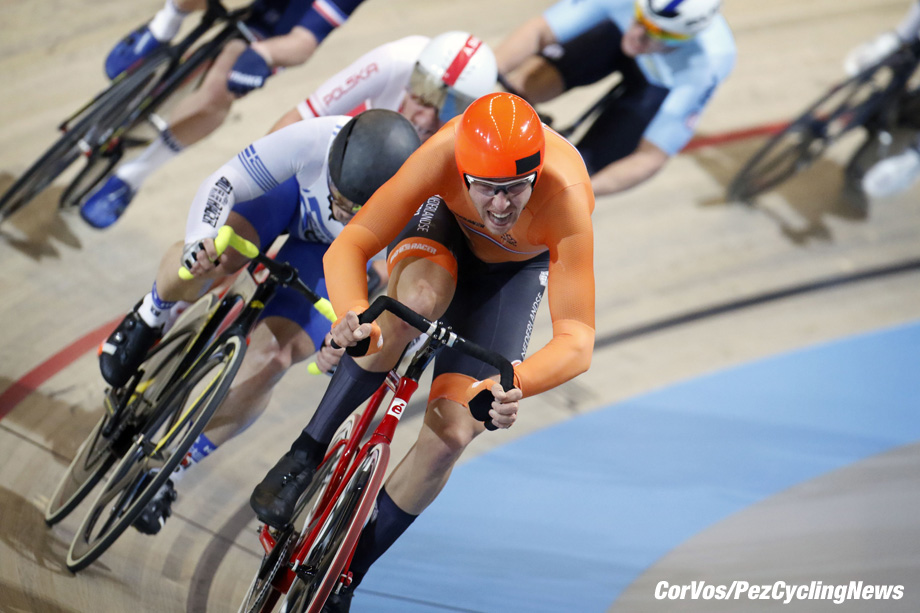 # Bad Luck and Disappointments:
Big Aussie, Matthew Glaetzer and Germany’s Joachim Eilers in the keirin 7th to 12th place ride off? Like that morbid song from a year or two ago said; ‘I wasn’t expecting that.’ And Jan van Schip of The Netherlands must be ruing that rogue bike which bounced across the boards after a crash, decked him, made him miss out in one of the sprints in the omnium points race which may well have cost him a gold medal. No gold then for the big Dutchman but he took home two silvers, one from the omnium and one from the points race. 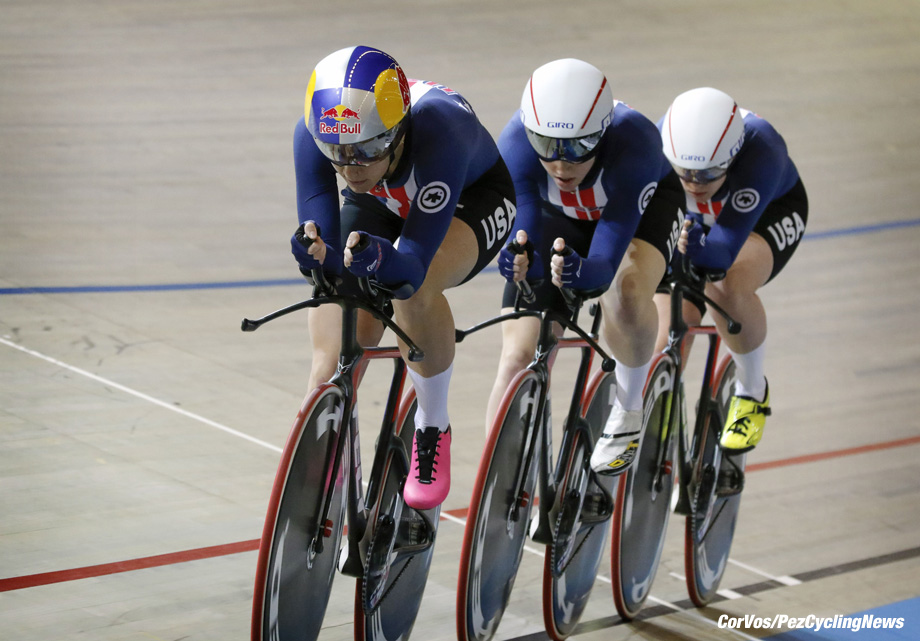 USA team with chainset on the left

# Business as Usual:
Those USA girls took full advantage of the fabulous Felts mentioned above to win the team pursuit, carrying on from their 2017 win. With team pursuiter supreme, Ed Clancy at the helm GB captured another wardrobe full of rainbow jerseys but they’ll have noticed that both Denmark (silver) and Italy (bronze) rode 3:54 during the competition to their best of 3:53. And bear in mind that for the Aussies, who didn’t field a team for whom – ‘it’s all about the Commonwealth Games on the Gold Coast next month.’ 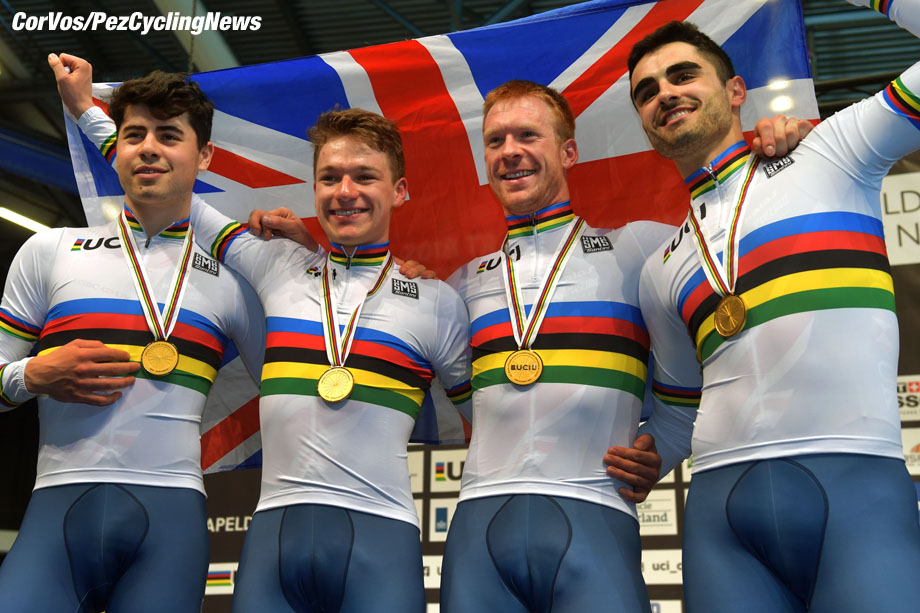 Ed Clancy and the boys

Germany continued their domination of the ladies’ sprint events with multiple medallists Miriam Welte and Kristina Vogel pairing up to win the team sprint with Welte winning the 500 metre time trial and Vogel the individual sprint. 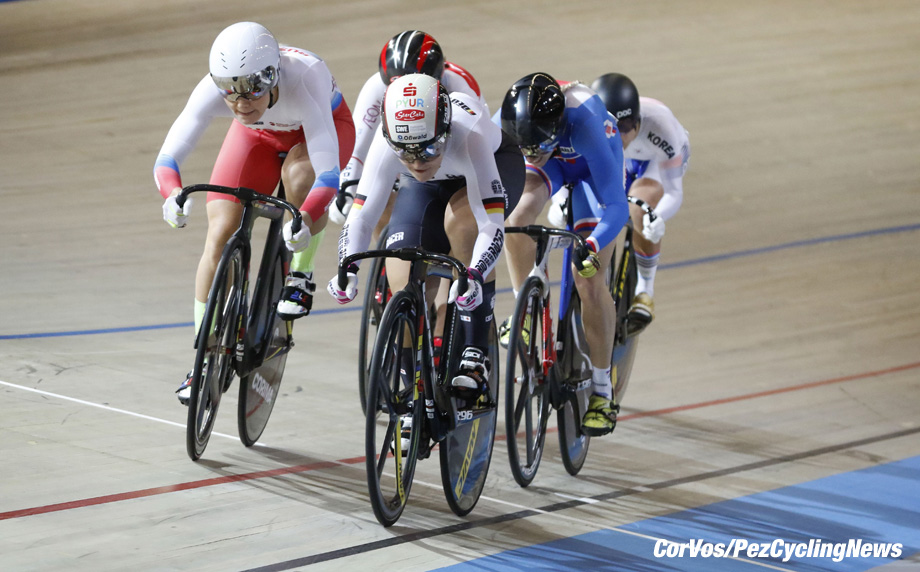 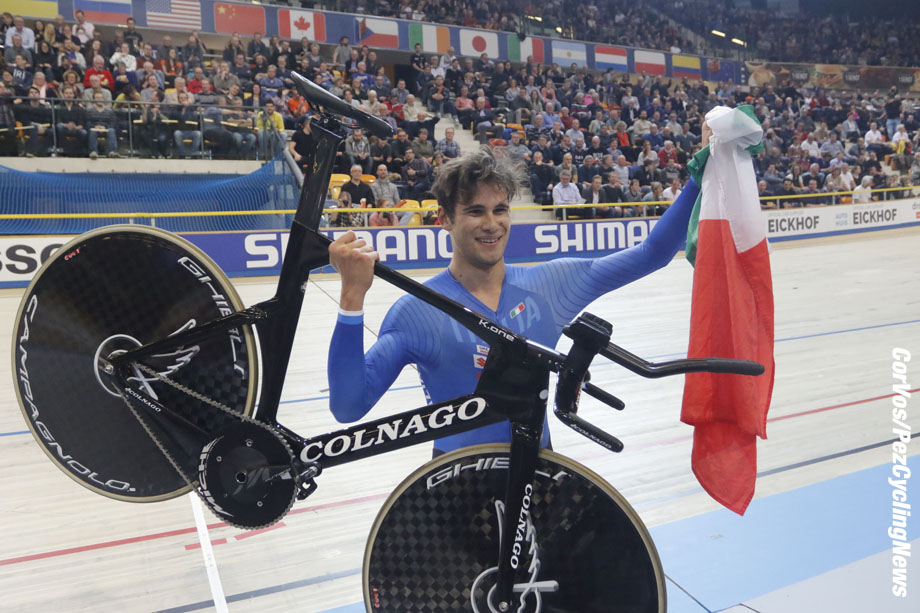 Filippo Ganna made up for last year’s ’silver stumble’ to take back the individual pursuit title he won two years ago; but as with the team pursuit – ‘no Aussies.’ There are few superlatives left for Scotland’s very own Katie Archibald, she may have ‘only’ taken silver in the team pursuit with the GB squad but teamed up with Emily Nelson to win the ladies’ Madison. 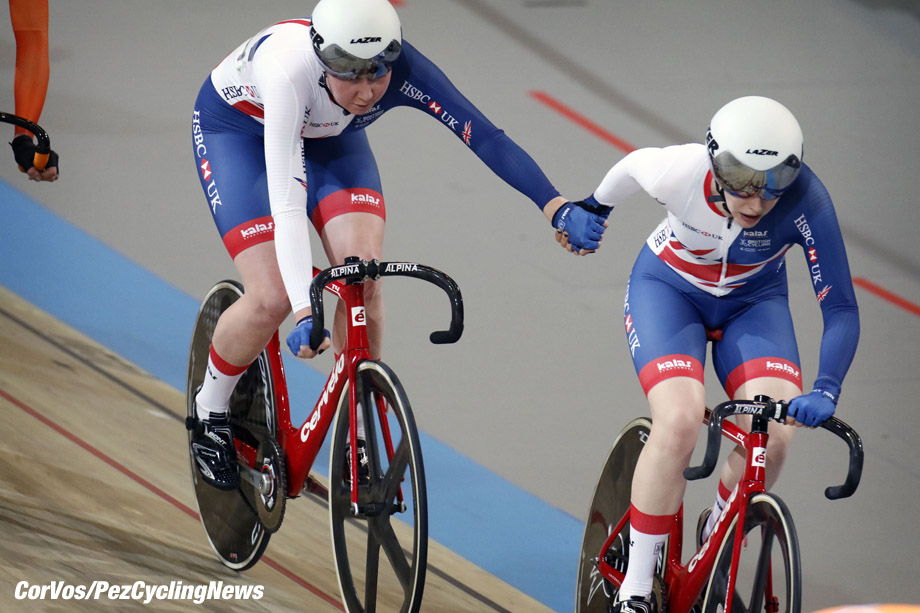 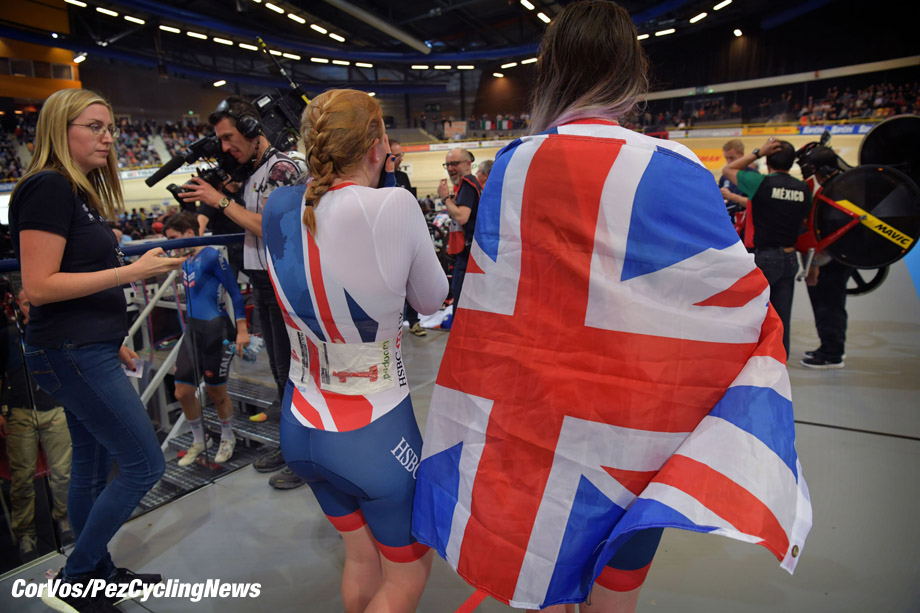 # Surprises:
Non bigger that Colombia’s Fabian Zapata winning the keirin, little to say except, ‘Viva Zapata!’ And maybe we shouldn’t be surprised given how quick Sen. Gaviria is? 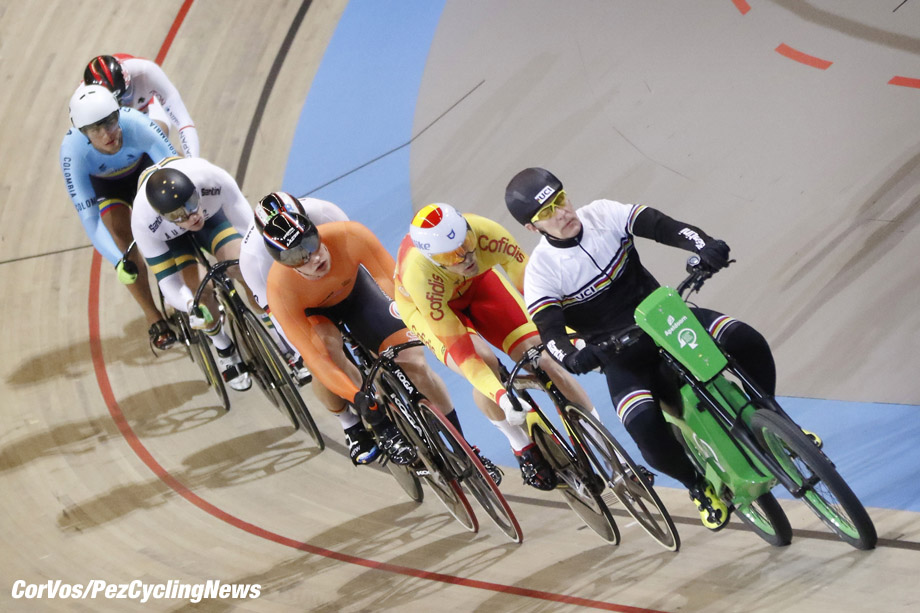 The keirin had a surprise winner

And few would have expected Poland’s Szymon Sajnoc to lift the men’s omnium – some may say that he was lucky that Van Schip tasted pine but luck is all part of the big picture of becoming a champion of the world. 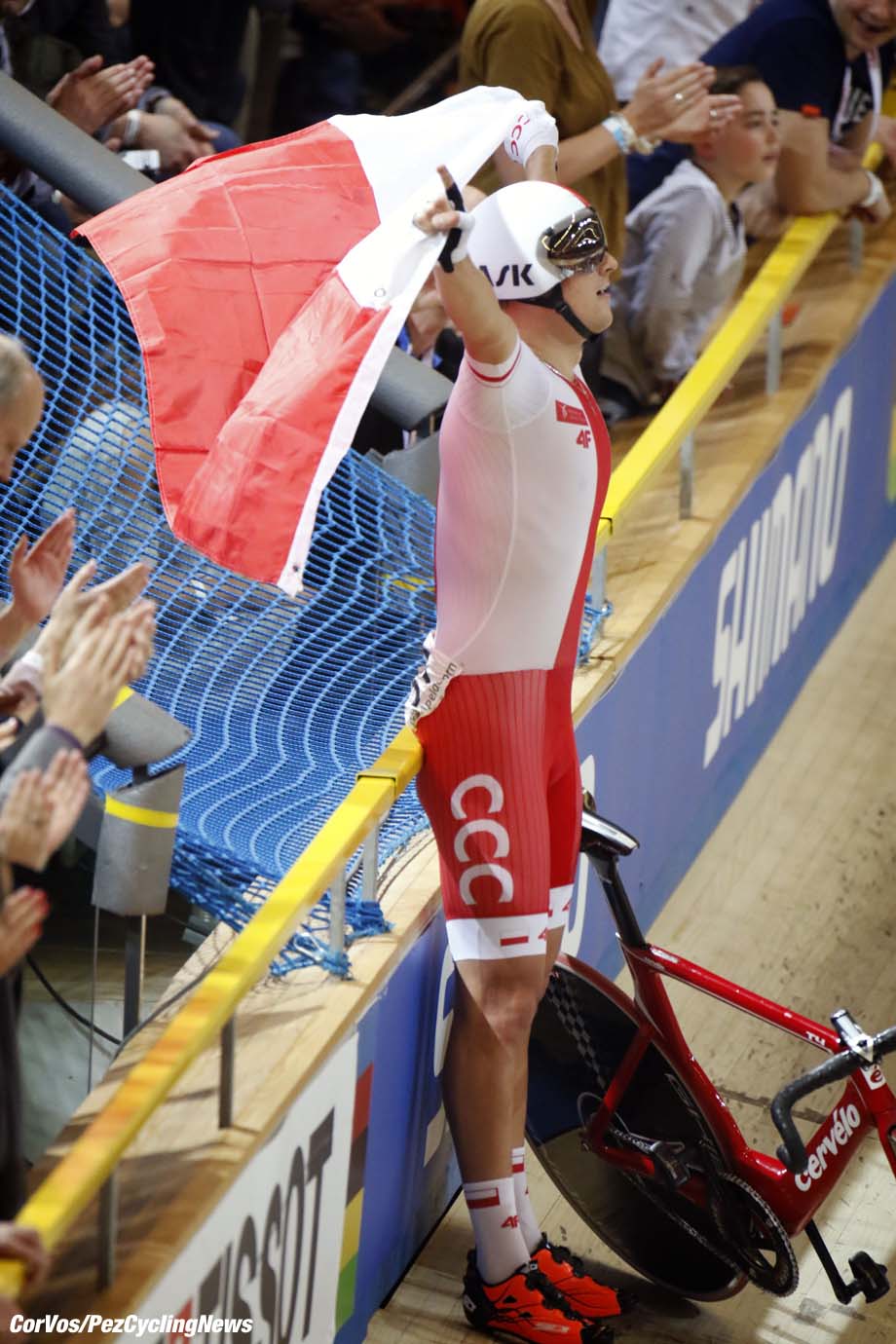 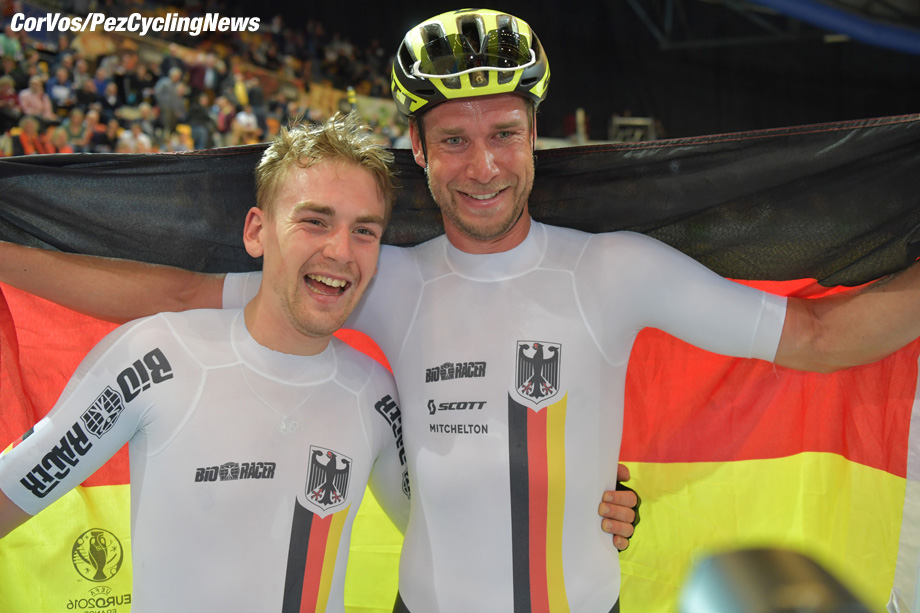 Most of us expected Belgium, Spain or Australia to take the Madison, not many would have expected Germany to win; but ‘Big Roger’ Kluge and Theo Reinhardt repeated their third place pairing from the Berlin Six Day to win with GB boys Mark Stewart and Ollie Wood missing bronze by one point. And whilst Belgian girl Nicky Degrendele could do with losing a kilo or two, she was plenty quick enough to win the ladies keirin with Kristina Vogels last in the final. 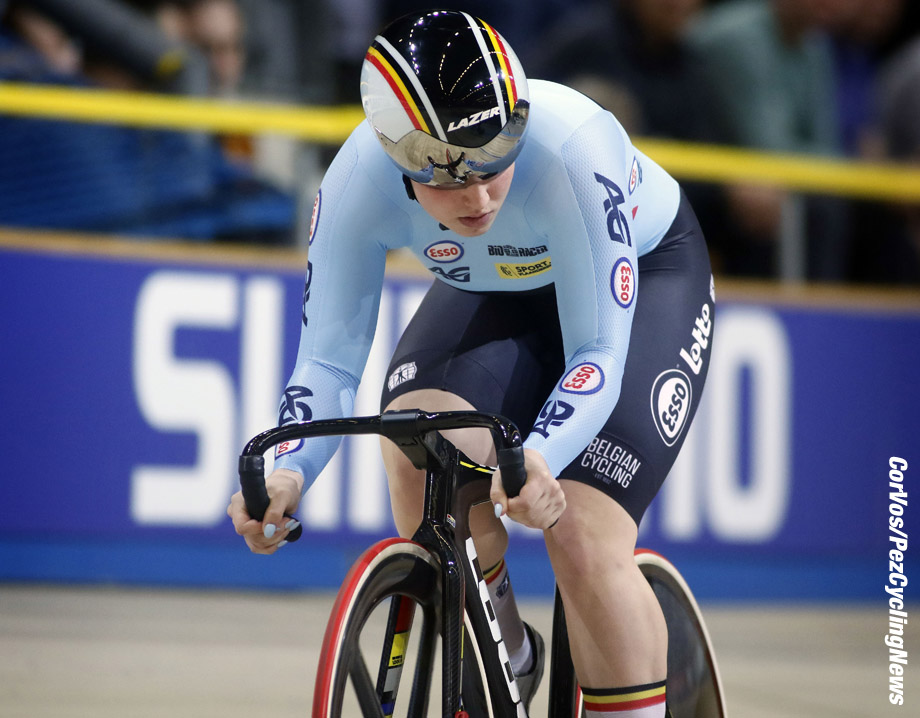 # Different Class:
Big home girl Kirsten Wild was on fire, taking three titles – scratch, omnium and points – outstanding. We had seen her race at the Bremen Six Day where she was in a class of her own so we weren’t surprised. 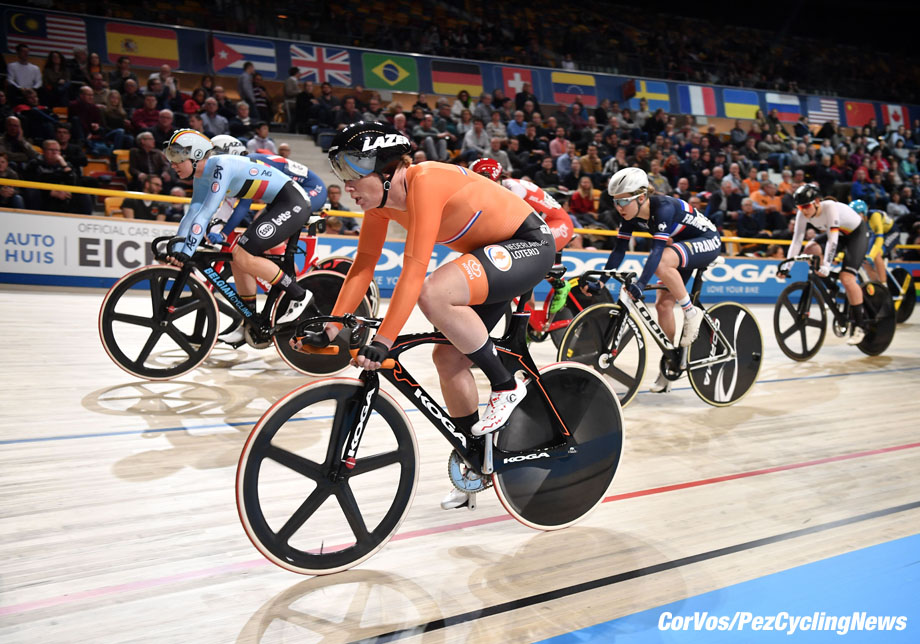 Australia’s Cameron Meyer took his fifth world points title, when he needed points he grabbed 20 by lapping the field – remarkable. 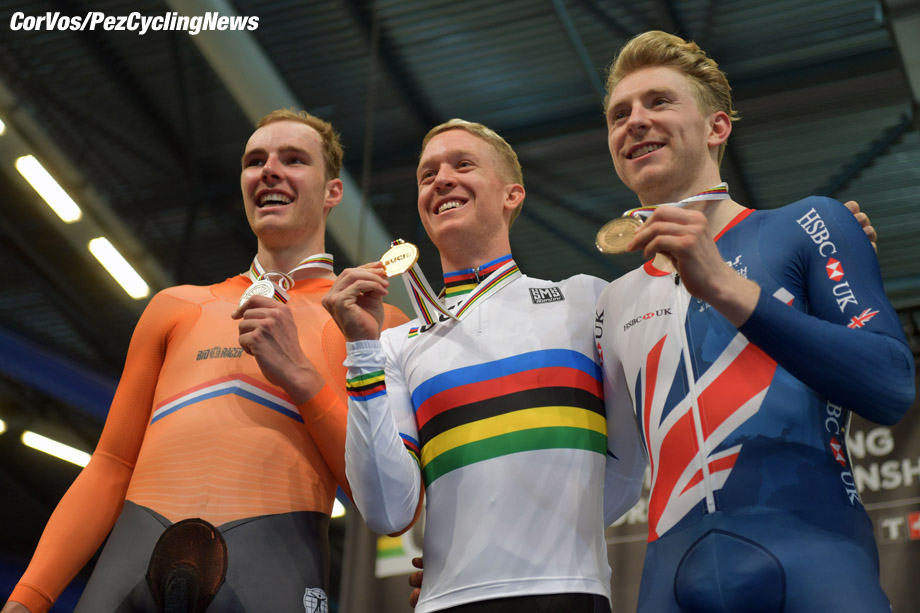 Chloe Dygert was in a class of her own in the ladies’ individual pursuit adding to her USA team pursuit gold – her times were announced as world records but world records can only be achieved with one rider on the track – they’re actually, ‘worlds bests’ but hugely impressive nonetheless. 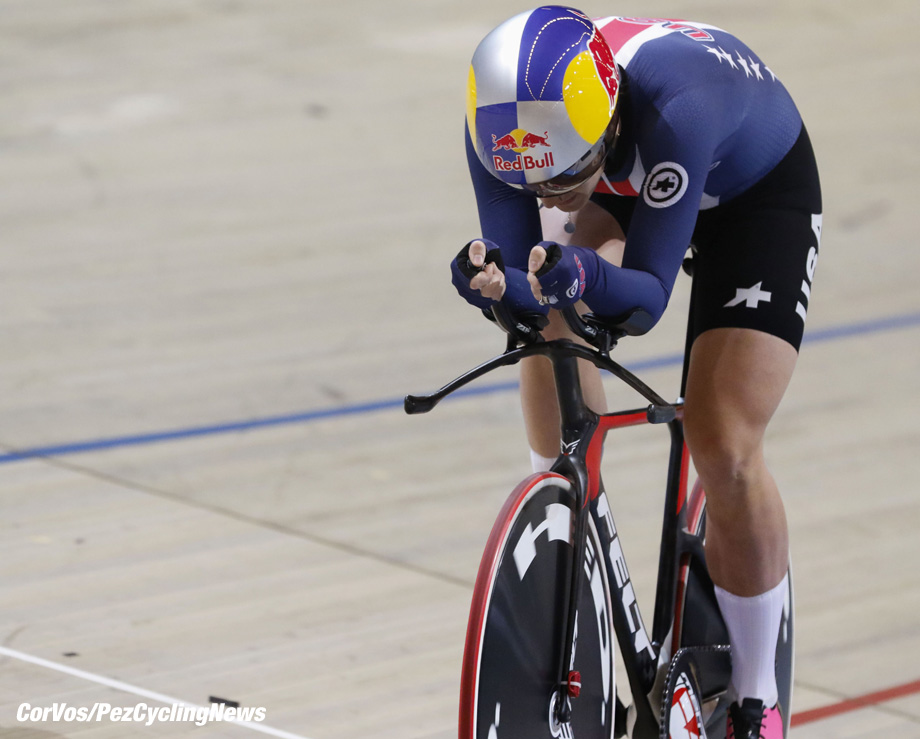 Jeffrey Hoogland won another orange gold in what was a remarkable kilometres competition with the medallists all under 60 seconds. Hot favourite, Aussie Matt Glaezer brutalised a huge gear – some were saying 124” – to silver but the Dutchman’s super-fast start on a lower ratio saw him take gold. And good to see big Theo Bos back on a sprint event podium for bronze after all those road adventures of his. We make Hoogland’s 59.459 a world record time, some third of a second ahead of the big Aussie’s 59.7. 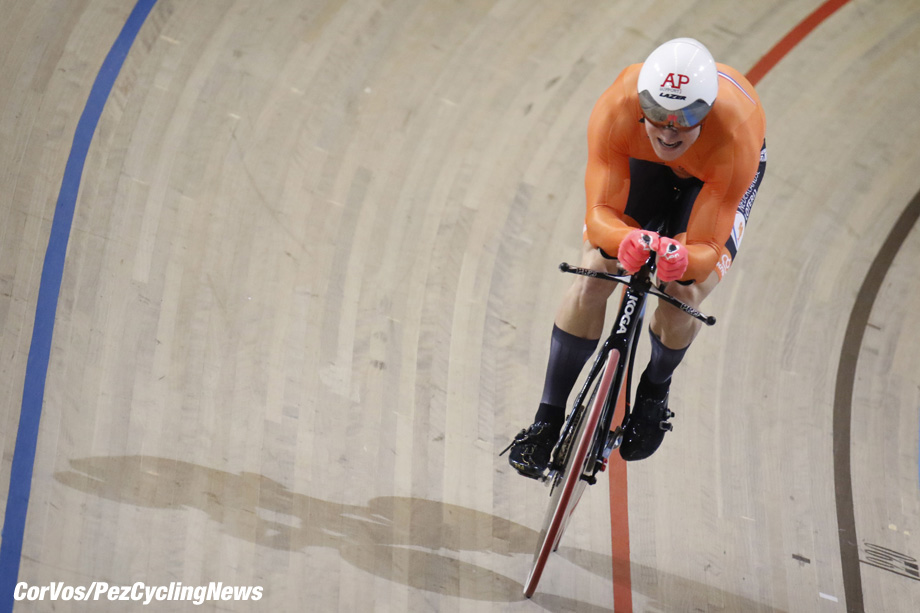 Jeffrey Hoogland and his socks

# Coming Good:
Strongman Matt Glaetzer may have been disappointed not to win the kilometre but he took a fine win in the individual sprint, his first individual world title, he has been in a gold medal team sprint team in the past. 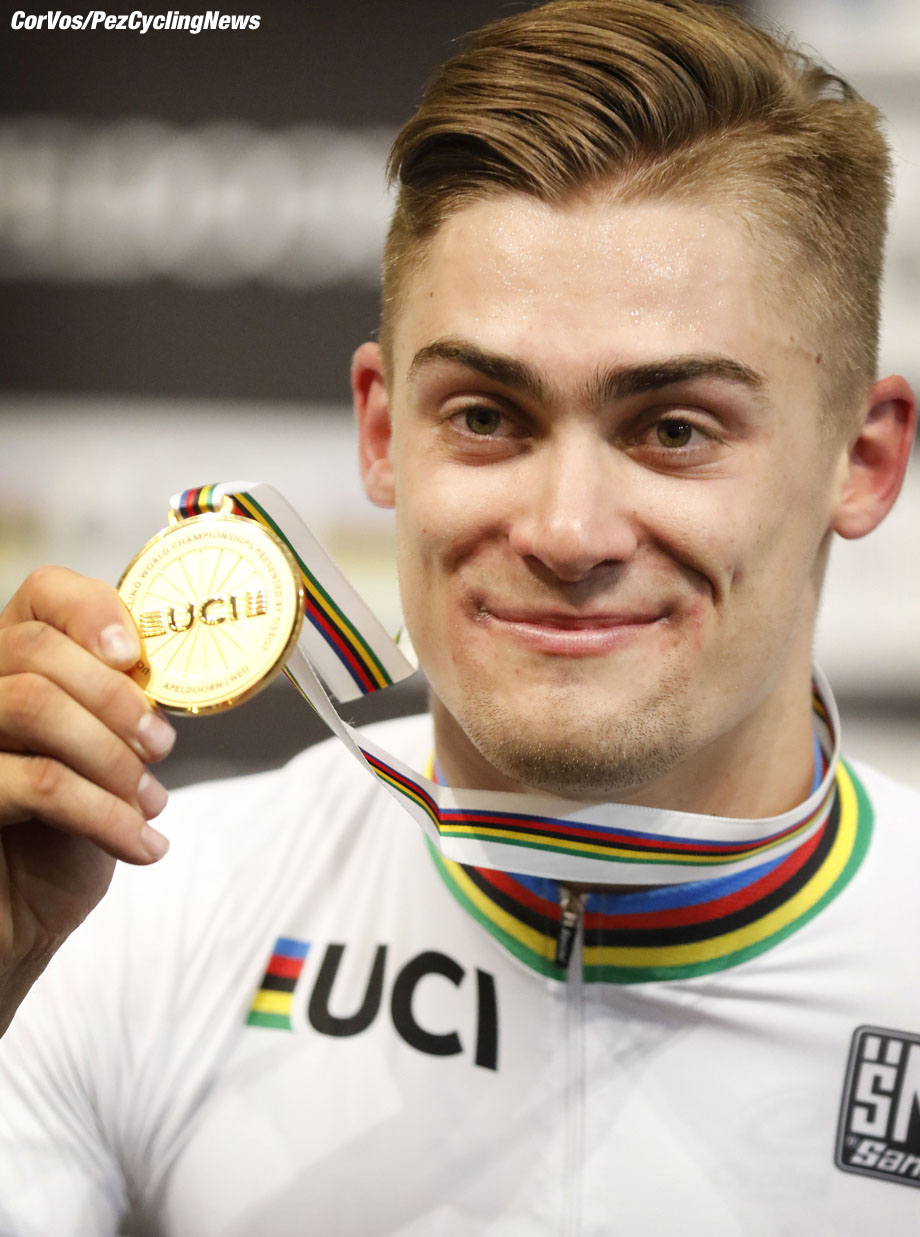 Home boys, The Netherlands took gold in the team sprint after silver the last two years, with no need for Hoogland or Bos in the line ups, showing the in-depth strength of Dutch sprinting. 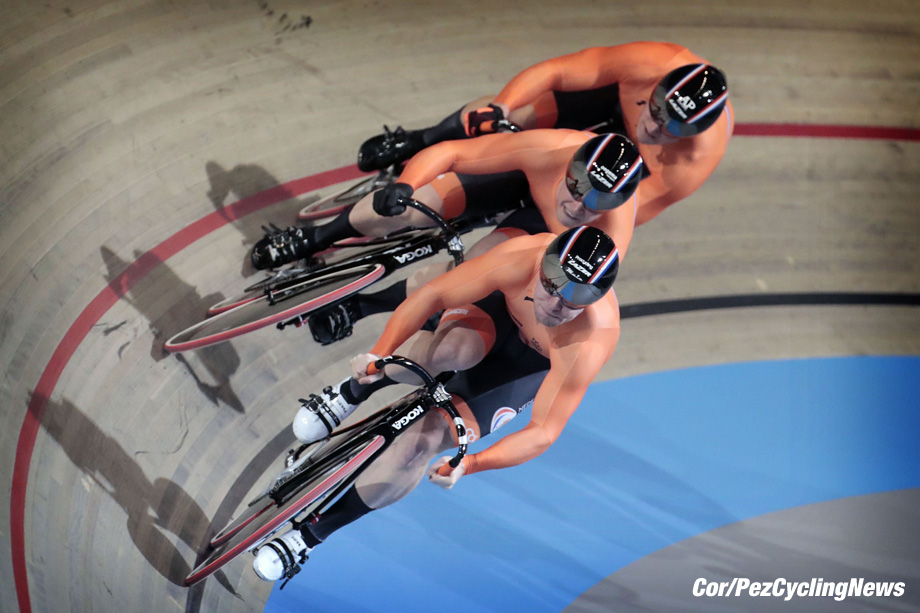 # The Future?
I have to start with my young countrymen; Jack Carlin from Paisley took silver in the team and individual sprints and was particularly impressive against Glaetzer in the final using some proper ‘old school’ sprint tactics, taking as many liberties as you can now without the commissars getting involved – a joy to watch. 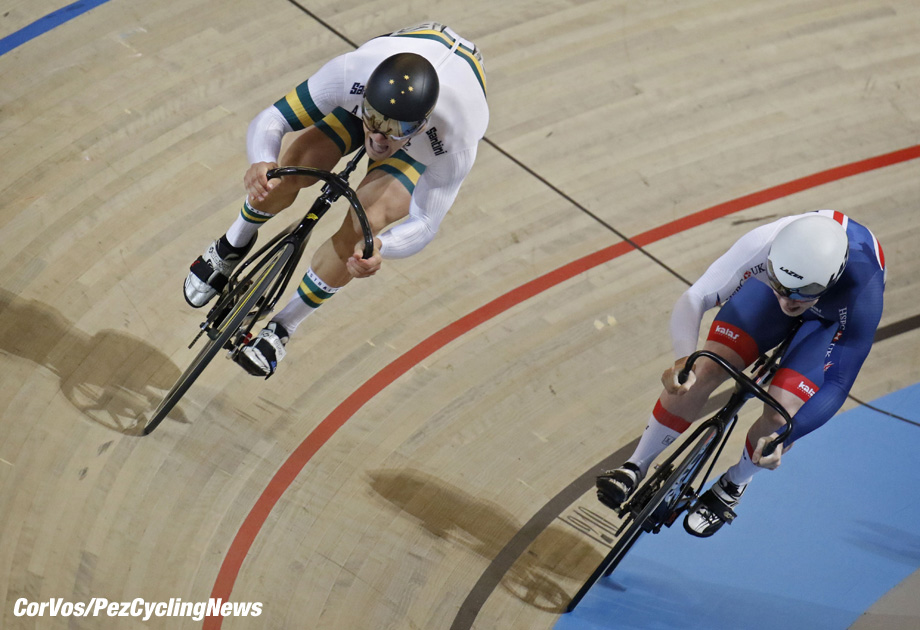 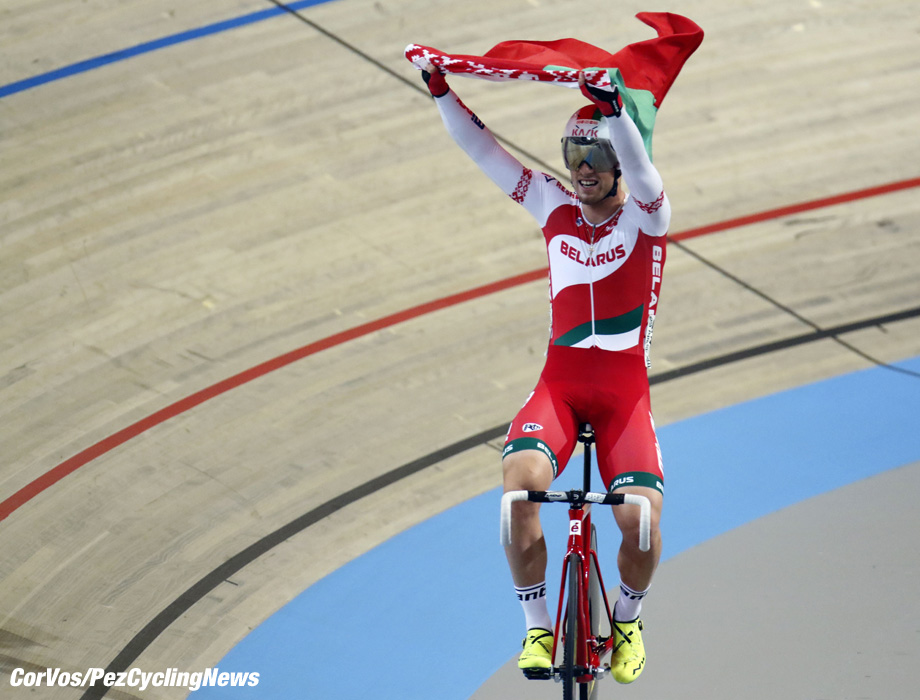 And then there was Dundee’s Mark Stewart taking bronze in the points race behind the invincible Meyer and missing Madison bronze by one point. Yauheni Karaliok of Belarus moved seamlessly up from 2017 u23 European Scratch champion to 2018 scratch champion of the world – one to watch, for sure. Amelie Dideriksen of Denmark has been a ladies world champion on the road as a junior and senior but has mean track legs too taking bronze in the scratch and silver in the omnium. 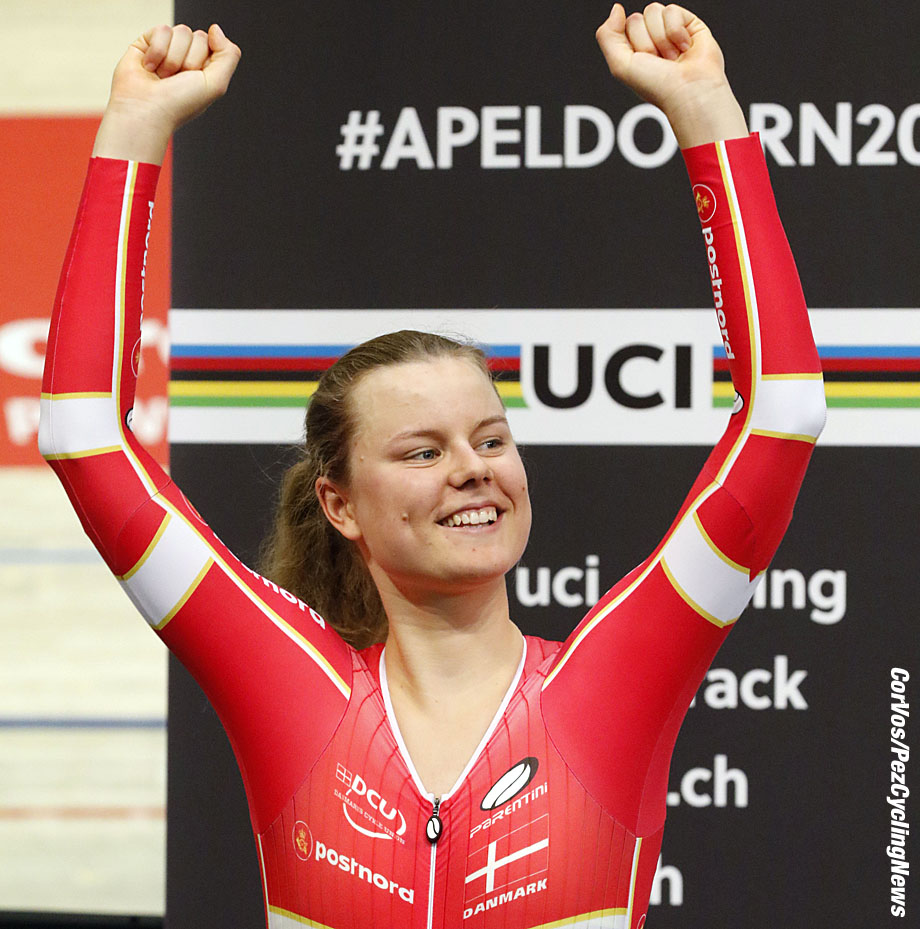 A good Worlds we’d say and appetites well whetted for the Gold Coast in a few weeks with all those from Her Majesty’s Commonwealth who did well in Apeldoorn now having to nurse that form to the other side of the world.