The pack is on the way of the 150 km "Strata" Third stage of Abu Dhabi cycling race from AlAlain to Jebel Hafeet, UAE, 22 October 2016. ANSA/CLAUDIO PERI

Media impact on the rise makes event ready for the WorldTour

The numbers of the second edition of the Abu Dhabi Tour are impressive – and this year’s event won by Astana’s Tanel Kangert saw a growth in many respects one year on from the inaugural edition. That growth includes a promotion to the WorldTour for next year; the third Abu Dhabi Tour will take place from 23 to 26 February 2017. Here’s the story of the second edition, in numbers: 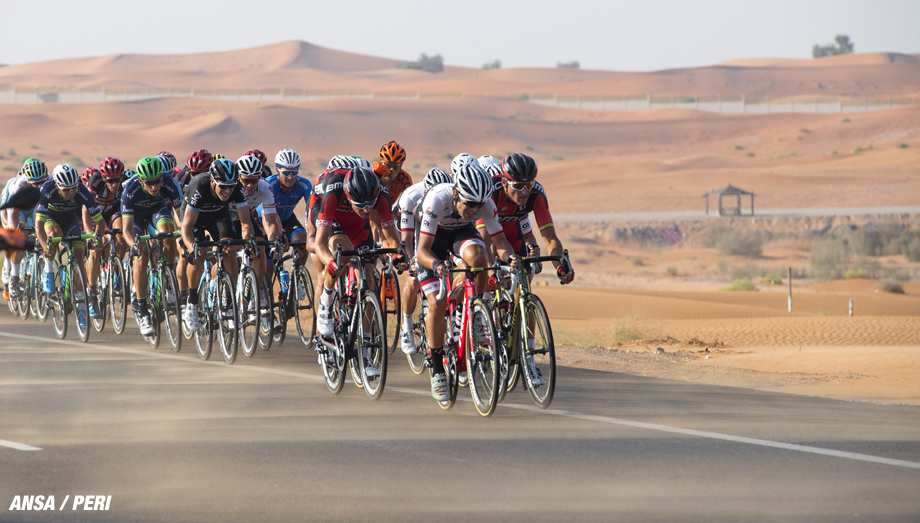 1 – for the Estonian Tanel Kangert, winner of the second edition
2 – editions of Abu Dhabi Tour so far
3 – stage winners: Mark Cavendish won two stages, then Giacomo Nizzolo and Tanel Kangert
4 – stages, with a total of 555km
5 – the continents represented by the athletes
6 – riders from the UAE, only Italy (18), Great-Britain (10) and Belgium (9) had more
12h27’34” – the total time raced
14 – riders that shared their data with Velon across the four stages including Rio Olympics road race champion Greg Van Avermaet (BMC Racing Team), Mark Cavendish (Dimension Data) and local hero Yousif Mirza (Nasr Dubai)
18 – the age of the youngest participant, Alan Banaszek (Poland)
19 – TV production cameras: 9 at the finish, 4 at the start, 1 in each of the two helicopters, 4 on the motorbikes during the race
24 – the age of best young rider Julien Bernard whose father Jean-François finished third in the 1987 Tour de France
28 – hours of live coverage on the Host Broadcaster, Abu Dhabi Sports Channel
33 – nations represented in the bunch
44.534km/h – average speed
45 – the age of the oldest rider in the peloton, Davide Rebellin (Italy), from the same team as the youngest man, Banaszek
45.703km/h – the average speed of the fastest stage
50 – press releases since the workshop in April
63 – Mark Cavendish’s average speed (in kph) in the last kilometer of stage 2 with a maximum at 71.7km/h
107 – riders at the start
102 – riders at the finish
147 – vehicles in total including cars, vans and team cars
177 – countries providing TV coverage
384 – the average power (in Watt) of Nicolas Roche – second in stage 3 – monitored by the Velon data tracking devices on the Jabel Hafeet climb. The maximum was 648 Watts
686 – the number of rooms booked for the whole Abu Dhabi Tour
882 – the power (in watts) developed by stage 1 winner Giacomo Nizzolo in the last 500m at Madinat Zayed
1,974 – articles published online about the Abu Dhabi Tour from 20 to 24 October
2,068 – media accreditations printed
2,700 – kg of ice provided for teams
5,000 – the square metres of hospitality area arranged for the four stages
10,200 – kg of team equipment delivered from 20 different Nations
12,000 – photos taken by the official photographers
28,000 – Abu Dhabi Tour Facebook fans
40,000 – water bottles distributed to the whole staff, including riders
44,000 – Unique Users per day – abudhabitour.com
221,000 – Page Views per day – abudhabitour.com 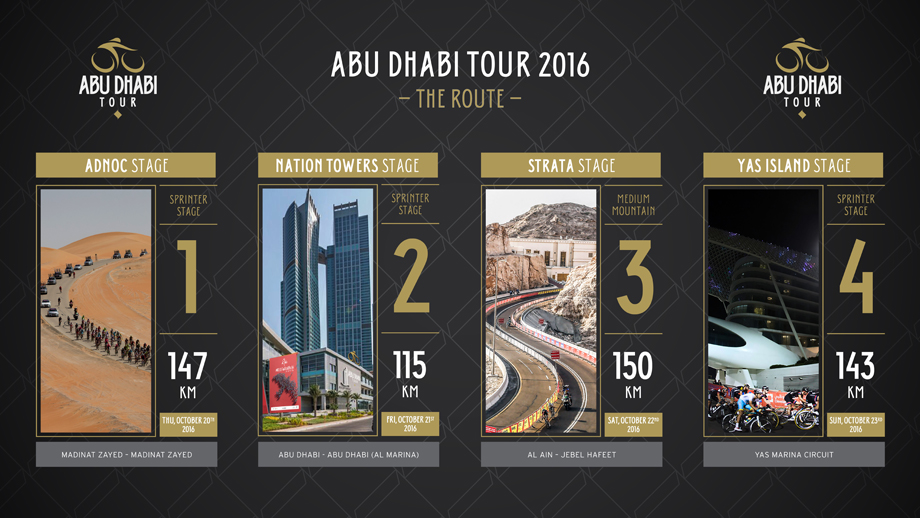