All Canadian Podium at Gastown GP!

History was made Wednesday night at the Global Relay Gastown Grand Prix as for the first time since 1984 as Ontario’s Ryan Roth (Silber Pro Cycling) won the Men’s pro race ahead of Garrett McLeod (H&R Block Pro Cycling) and Will Routley (Optum p/b Kelly Benefit Strategies). Denis Ramsden won the womens’ race at another great night of racing as part of BC Superweek.

Vancouver, BC – History was made Wednesday night at the Global Relay Gastown Grand Prix as for the first time since 1984 when Alex Steida, Brent Mudry, and Bruce Spicer finished 1-2-3, three Canadian men stood atop the podium. 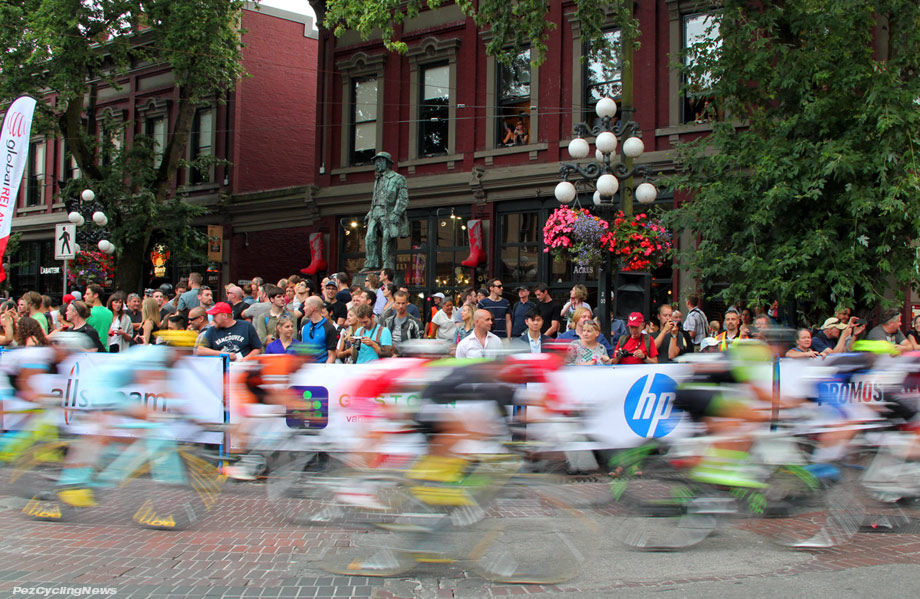 It was also the exact same podium as Friday’s MK Delta Lands criterium, which also saw Kitchener, Ontario’s Ryan Roth (Silber Pro Cycling) win ahead of Garrett McLeod of Vancouver (H&R Block Pro Cycling) and Abbotsford resident Will Routley (Optum p/b Kelly Benefit Strategies). The way the race wrapped up was also similar to Friday’s crit as Roth built a lead with three laps to go and with the help of his Silber teammates, including Matteo Dal-Cin, build more of a gap than the field could make up. 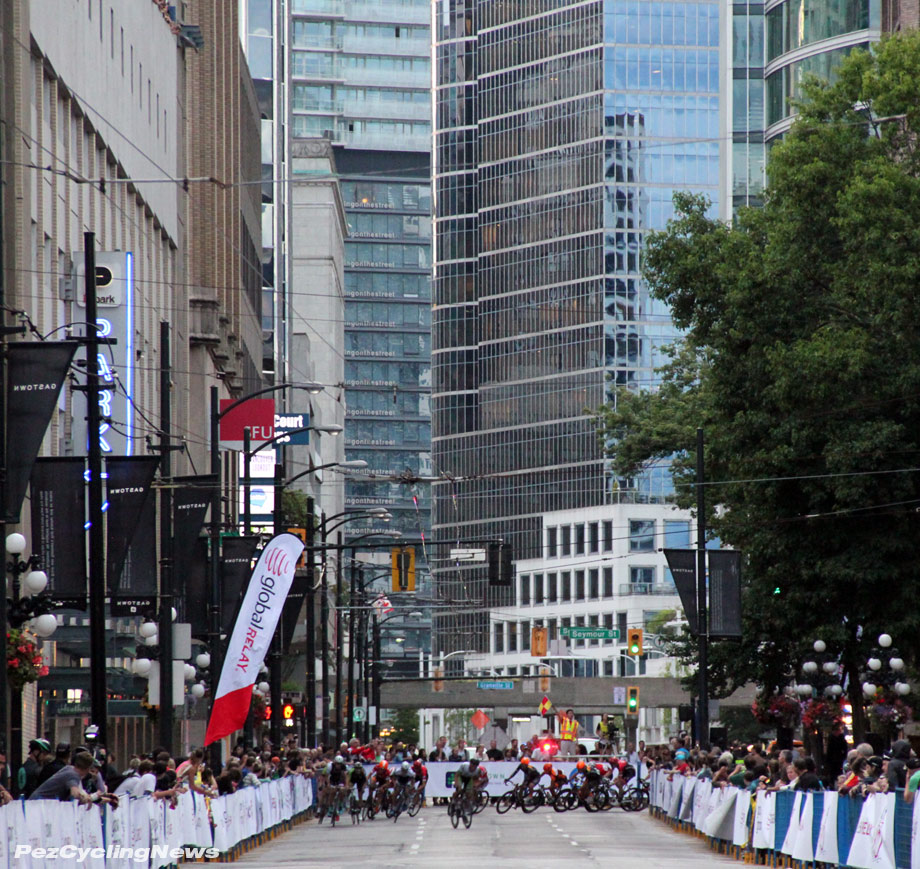 “Really it was just like last Friday night with the same top three in the same scenario. Ryan had his teammate attack and he’s riding so strong. I kept looking over my shoulder to see the break chasing us and then Ryan and Eric Young – two of the strongest finishers in the race – so we were really expecting that would be the play for the finish. I found myself out there so I had to try my best and found the podium, I just couldn’t finish it,” said Routley. 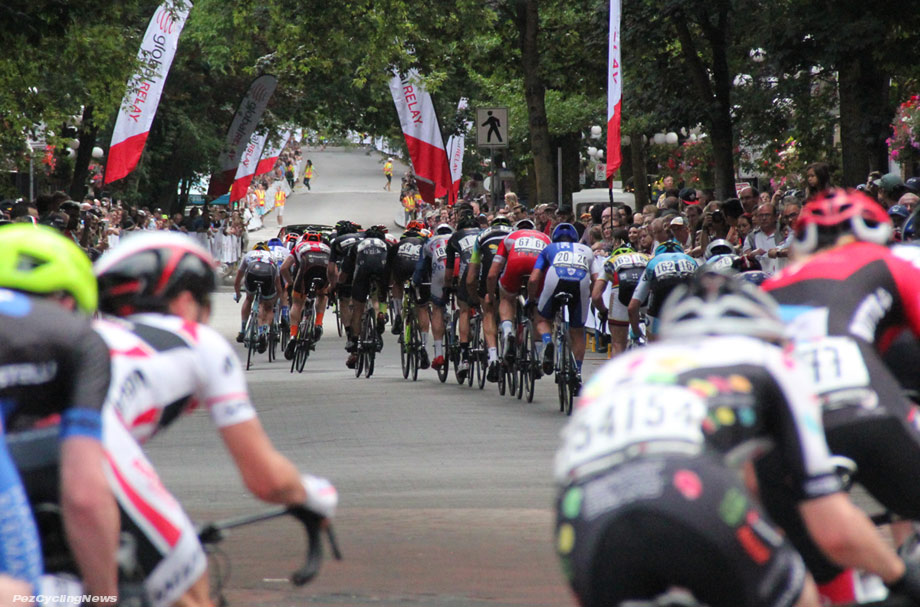 In addition to seeing three Canadian men atop the podium for the first time in recent memory, Wednesday’s was also the first time in a long time that the finish came down to a breakaway as opposed to a sprint, which suited Roth just fine. 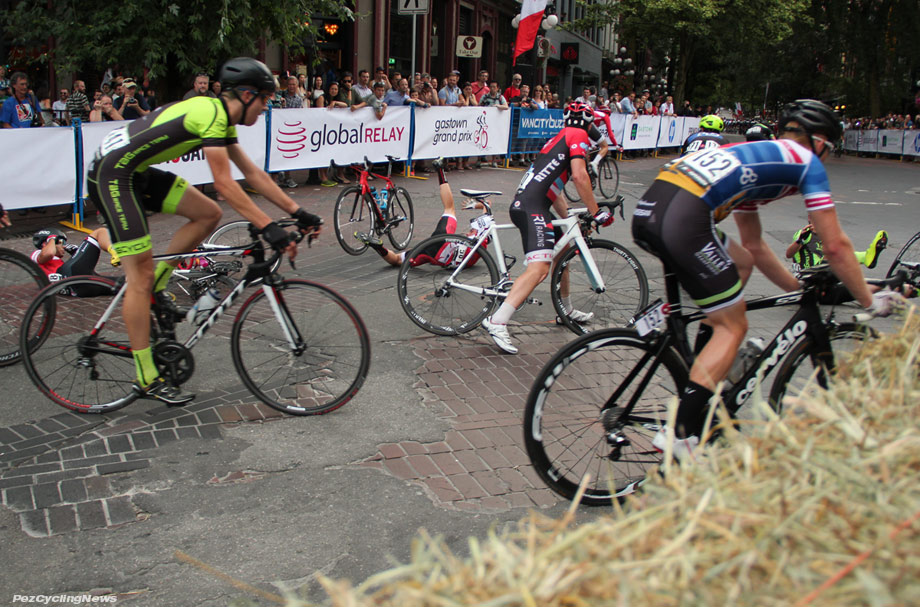 “Being aggressive paid off and we’ll probably keep racing that way because a bunch sprint is always a lottery and right now we don’t have a big, big favourite in those kind of finishes so we’re always going to be on attack,” he said after completing the 50-lap, 60 kilometre course in one hour, 16 minutes, and 50 seconds, four seconds ahead of McLeod. “There was one word I said to Matteo – ‘attack’. With about five to go, I said ‘We’re going to start going, one after another and hopefully one of us gets away’, and it only took two laps, so we can’t complain about that.” 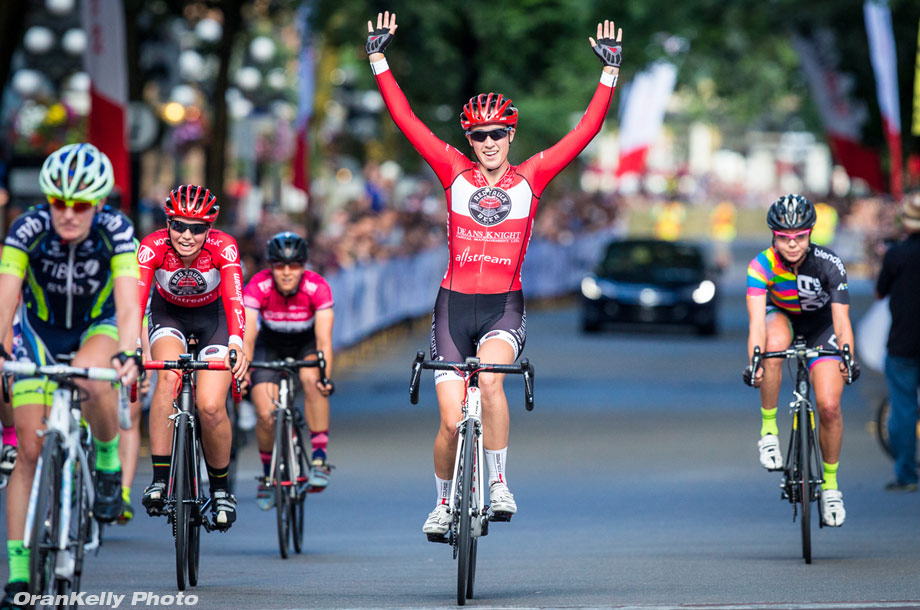 Routley was as surprised as anyone that the finish played out the way it did.

“I wasn’t expecting it to finish in a breakaway either, it hasn’t probably since it was pouring rain here (in 2007). I’m pretty happy about the podium, it’s pretty great, but at the same time, once Roth came across, Silber had two guys and that changed the dynamic,” he said.

With the experience of what happened just five days ago at the Tour de Delta fresh in his mind, McLeod thought Roth might put the race out of reach went he went 45 laps into the race.

“The strong break was up the road for a while and my team didn’t have a guy there, so on the little riser (just before the start/finish line), I hit it and got across with Ryan and then the Silber guys played it really well at the end. Matteo went and I jumped pretty hard to try and close that, but when he was back, Ryan was off right away,” said McLeod, who was the 2010 Canadian National U23 Criterium Champion. “I think a lot of the guys that had been out there were pretty cooked because the group was breaking up and no one really had the legs to pull Ryan back.”

Both the stage announcers and his coach Gord Fraser, who won the Gastown Grand Prix himself in 2003 and 2005, alluded to the fact that the Roth may be a sleeper in Canadian cycling.

“Ryan’s such an incredible leader of the team. There’s a lot of guys getting a lot of ink, but Ryan just produces time in and time out,” Fraser exclaimed. “He’s the most consistent rider we have in Canada and to see him win tonight was just a real pleasure for me.”

For his part, Roth is happy with the decision to join Fraser’s Silber team last year.

“I’m really happy with Silber right now and I think the goal is to just continue to take small incremental steps up and see how far we can go,” the 32-year-old former Canadian National Road Race Champion said. “I think everybody’s happy with the progress and we’re doing a little bit better than people expected so we’re trying to keep that momentum.”

WOMEN’S RACE
With performances like the one she had to win the $12,000 Global Relay Gastown Grand Prix on Wednesday night, Denise Ramsden’s Trek Red Truck p/b Mosaic Homes might encourage her to miss more pre-race meetings. 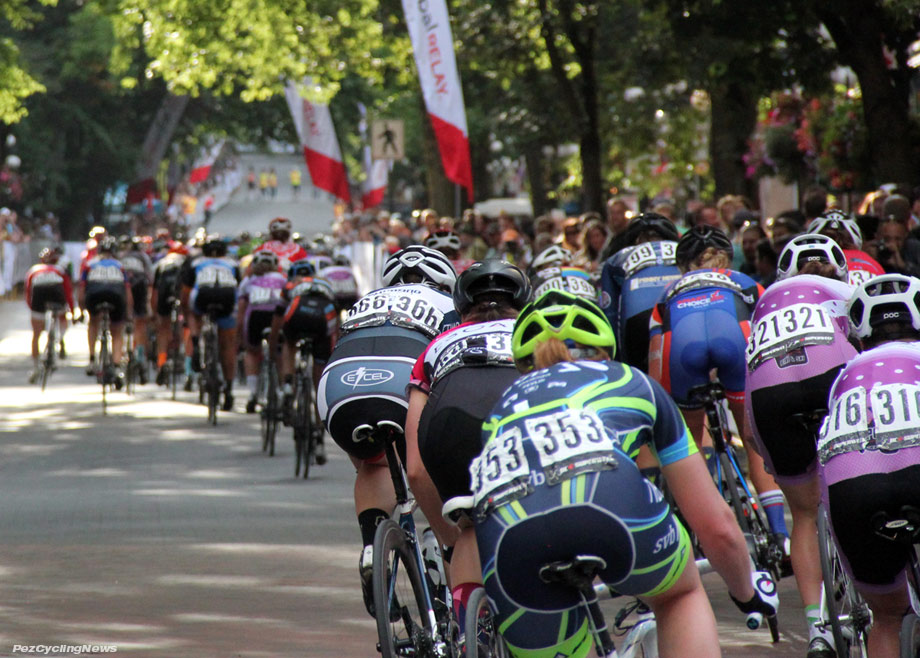 Ramsden wasn’t able to make the meeting because she was with her mother who underwent surgery all day and arrived about 45 minutes before the start gun went off, but it didn’t seem to faze the Vancouver native or her teammates as she put on as dominant a performance in the 35 lap, 42 kilometre course that has been seen at BC Superweek and the Global Relay Gastown Grand Prix. The 2012 Canadian Olympian went away from the pack just ten laps into the race and didn’t look back – at one point having a near 60 second lead and eventually even caught up to the back of the field to cruise across the finish line on the final lap.

Interestingly enough, the dominating finish after an aggressive move on lap ten wasn’t exactly what Ramsden planned for going into the race.

“(My teammate) Leah (Guloien) and I talked about being a little less aggressive and follow moves, but the moment came and it was just a good time to go,” she said. “I felt pretty good out there, yesterday I felt absolutely awful at UBC, so I think (today) was just a good day. My mom’s at home, she really wanted to be here watching but the anesthesia is still wearing off, so I dropped her off and came here and that was my preparation.”

Second place finisher Annie Foreman-Mackey, who races for The Cyclery–Opus team out of Ottawa, had a lengthy lead ahead of the peloton and rode the last lap of the race knowing full well where she would finish.

“Our plan going into this race was to get in a breakaway. I missed Denise’s move… I had some fire and tried to follow that. Lex (Albrecht) attacked and I followed her and then I managed to gap her. I tried not to look back and just kept going,” said the 24-year-old with a bachelor’s degree in health science. “There were a couple of moments with around seven laps to go where I thought, ‘Oh no, they’re hot on my heels!’, so I couldn’t be happier to finish it off.” 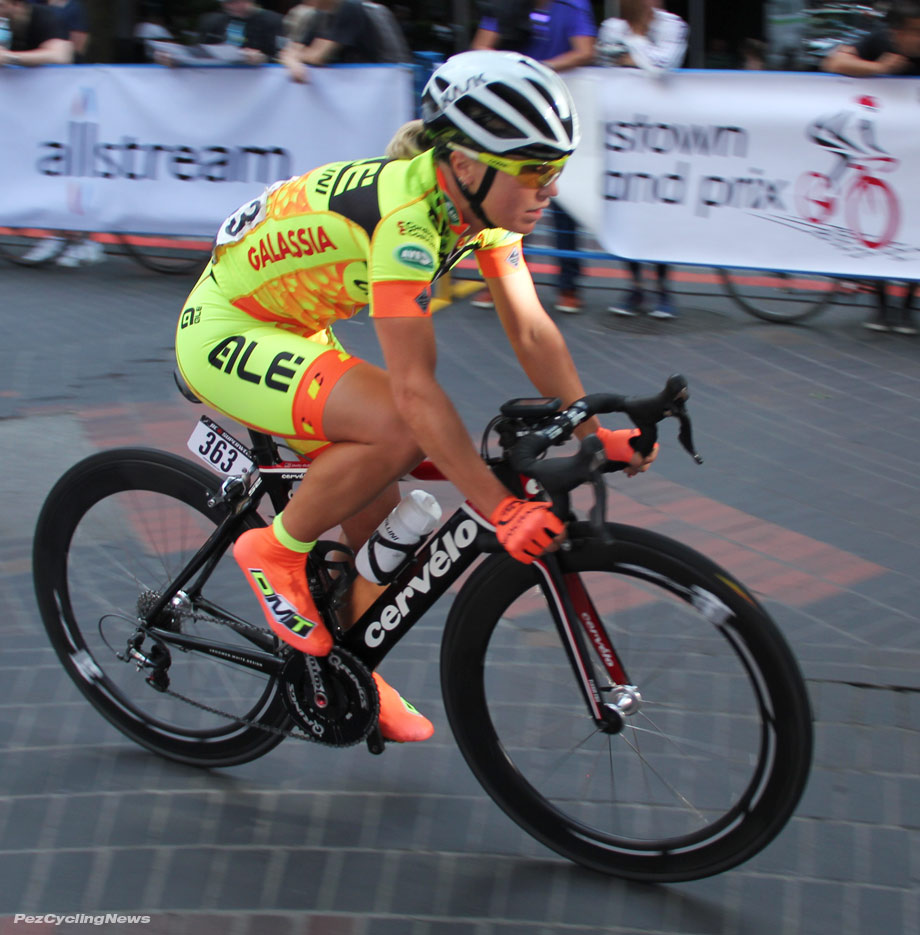 Being on the podium at BC Superweek is becoming routine for Shelley Olds as the 34-year-old finished Top-3 for the fifth race in a row. Despite not having a team with her at BC Superweek, the results – and prize money – continues to pile up as she walks away with $2,000 for her efforts in Gastown.

“Unfortunately I’m riding alone, so I kind of left the responsibility to the other teams that had 4-5 riders, so I took a risk in that sense. Denise is an incredible, strong rider and we know that, so I was trying to tell the girls when she was going that we can’t let her go, she’ll take a lap. I took a risk and was saving for the sprint today,” said Olds, who won the 2012 UCI Road World Cup in China. “Riding the cobble stones in Gastown is definitely not easy! The bike is kind of jumping around on you, so you have to stay low and keep control of the bike, so it’s a different sprint.”