Race Report: The Belgian champion, Philippe Gilbert, has had a great spring campaign and taking his fourth victory in the Amstel Gold Race is another big thank you to his Quick-Step team. The finish came down to a two man battle with Michal Kwiatkowski, but the Belgian had the final kick. 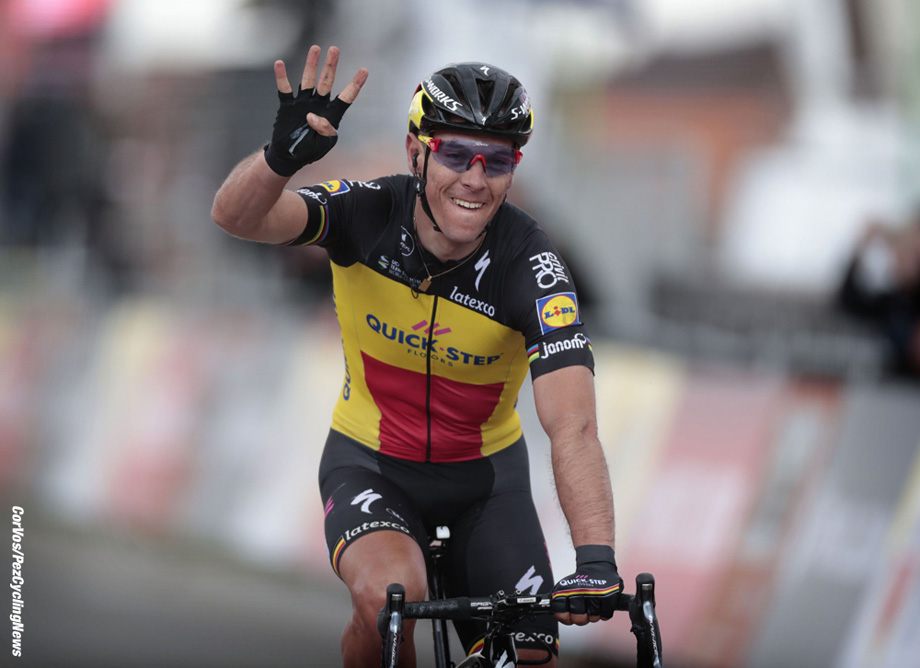 Phil Gil raises the four fingers of his right hand whilst Kiwato can only drop his head in defeat; Philippe Gilbert (Quick-Step Floors & Belgium) has just grabbed his fourth Amstel Gold. But a split second earlier it looked like Michal Kwiatkowski (Sky & Poland) had out foxed him with a monumental jump which put lengths into the Belgian Champion – however, the Belgian Champion kept cool and took another memorable win. Swiss ‘old timer’ Michael Albasini took third from the breakaway group which the Monument Men jumped on the last climb. Another great bike race on a windy day with a great finalé over the new parcours which provided terrific action. 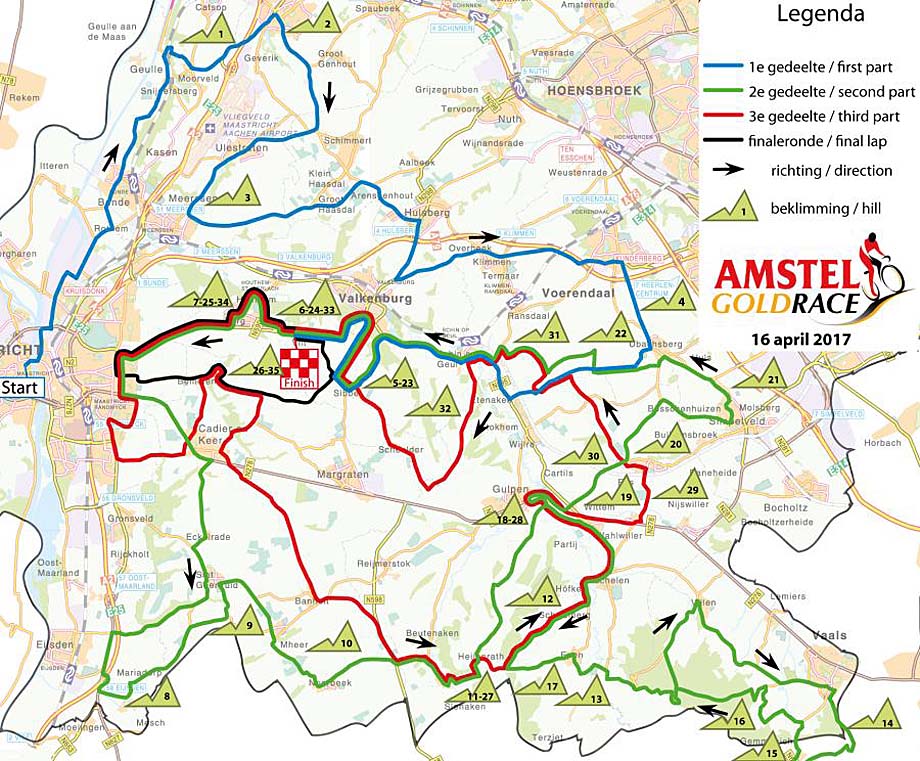 By the time 100 kilometers had rolled under their rubber at around 40 kph, they had 7:30 on the bunch where a little further in Gilbert was one of several to come down in minor crashes – but was soon back on his way. With 100K to go the gap was back below five minutes with the race proper still to commence. But with 90K to go the gap was still more than four minutes, the break working well together as they hung that tight left past the bars and onto the Cauberg with the usual huge crowd. 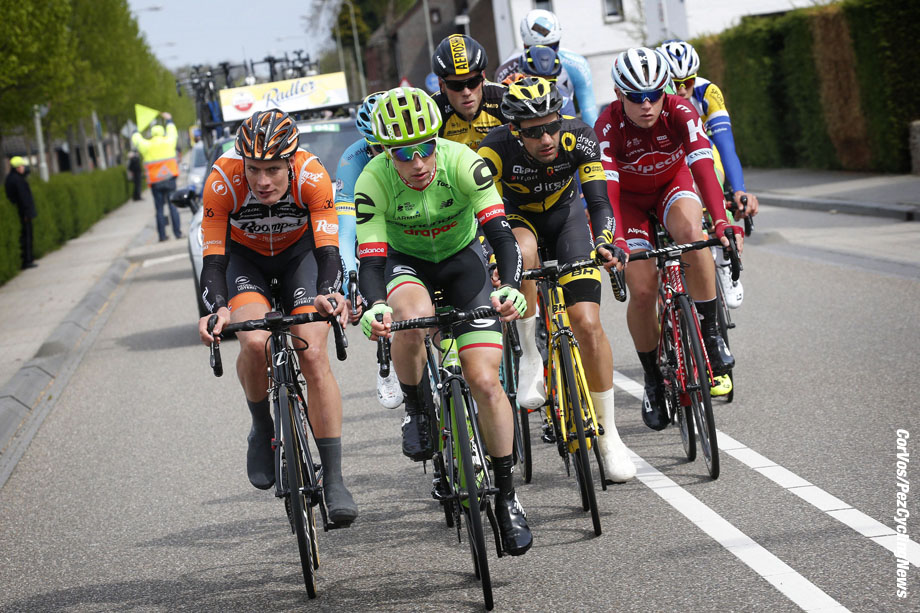 No heroics from the breakaway, tackling it steadily rather than charging into it; not so the huge peloton, riding hard with Sky and Movistar driving things along for Kwiatkowski and Colbrelli. The roads get narrower, so does the time gap, slipping down towards two minutes with 70K to go as BMC mass at the front of the peloton and drive.

BMC automatons De Marchi and Oss drag it back below the minute with 60K to ride, stringing the peloton way out on the narrow Limburg lanes. The Loorberg, climb number 27 of 35 and the break begins to splinter with Grellier jumping clear as ‘the catch’ becomes inevitable with BMC still shoveling on the coals. At 50K to go just five of the break remain clear by a handful of seconds, with Grellier ahead of the other four. 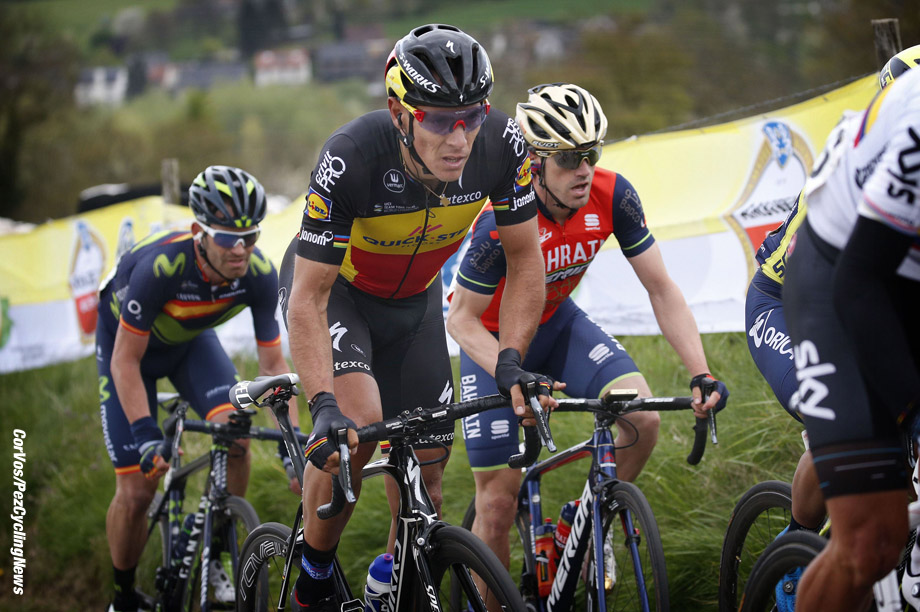 Ronde winner Philippe Gilbert (Quick-Step Floors & Belgium) airs his national champion’s jersey at the front, into climb 28 with 45K to go and just Grellier left solo up front. The Frenchman succumbs with 40K to go as the peloton hurtles round the left hander into climb 29, the Kruisberg with nasty grades on its narrow tarmac ribbon.

Six go clear – Gilbert and Tiesj Benoot (Lotto Soudal & Belgium) are there, another three come across – nine now up front. Climb 30 now with 36K to go and the nine have 20 seconds and more – Albasini (Orica-Scott & Switzerland) is there too, as is Columbian champion Henao (Sky). The peloton is down to just perhaps 15/20 men now, with pre-race favorites Colbrelli (Bahrain-Merida & Italy) and Valverde (Movistar & Spain) in there. 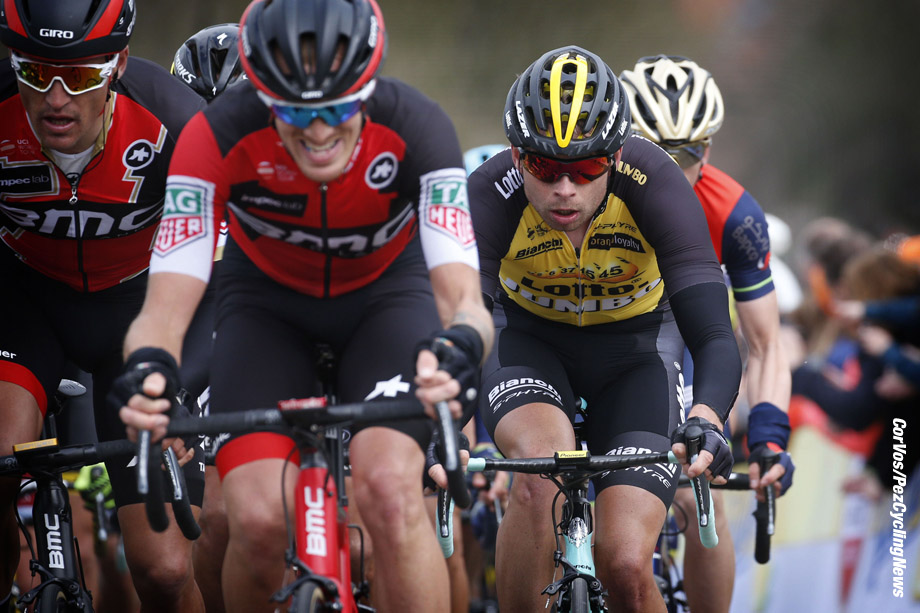 Climb 31 is the Fromberg; Albasini drives from Haas (Dimension Data & Australia) – surprisingly, Benoot has ‘popped’ and just seven are ahead as they hit the Keutenberg (32). It’s one of the steepest hills in the race: we now have up front – Gilbert (Quick-Step) Haas (Dimension Data), Izaguirre (Bahrain-Merida), Sergio Henao (Sky), Albasini (Orica-Scott), Lindeman (LottoNl-Jumbo), Rojas (Movistar) – with Kwiatkowski zooming across to them making seven up front.

Lindeman has popped and defending champion, Gasparotto (Bahrain-Merida & Italy) has crashed out as the wind now begins to play its part with little groups chasing each other across the rolling Limburg farmlands. But it’s beginning to look more and more like the race is the seven man break as they prize the gap out to 29 seconds inside 20K and there’s the plunge into Valkenburg.

The Cauberg for the last time with Henao driving for Kwiatkowski; over the top they have 40 seconds on the chasing group and 60 seconds on the peloton. The group works well, except for Rojas who’s hoping his ‘Capo’ Valverde can get across – unlikely. The penultimate climb, the Geulhemmerberg – inside 15K – for the third time as the leaders’ gap slips a little. 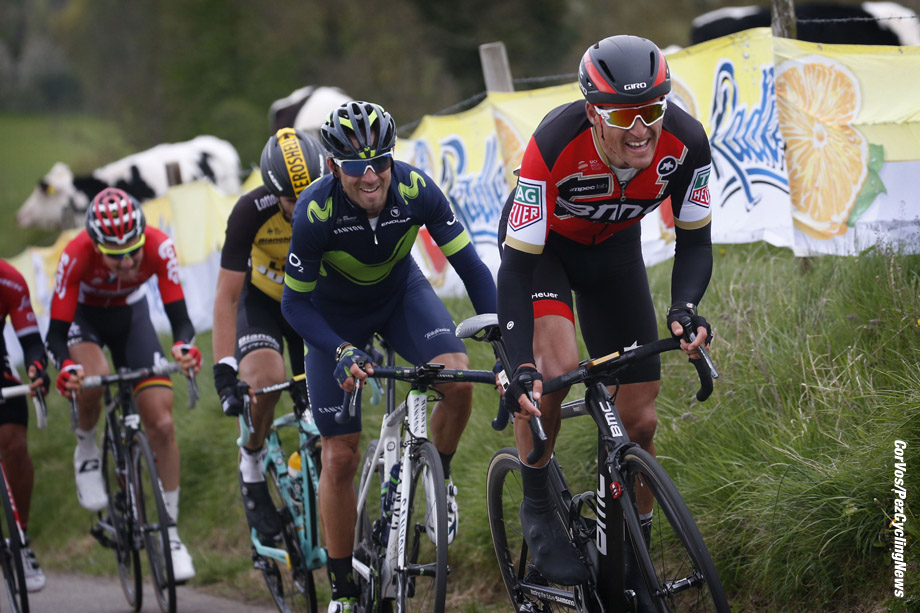 Gilbert looks very determined – behind GVA of BMC leads the chase but it doesn’t look good for the Paris-Roubaix winner and his fellow chasers, Valverde, Wellens (Lotto Soudal) and Jungels (Quick-Step) among them as the leaders spell smoothly onwards.

We’re inside 10K now and the lead is over 40 seconds, so it’s between the seven for sure now. The last climb is the Bemelberg and Kwiatkowski goes immediately – but Gilbert counters as the rest grit their teeth and dig deep to hang on.

Gilbert – and then Gilbert again with Kwiatkowski on his wheel levering open a gap and now it’s Kwiatkowski making Gilbert wince. The Pole looks oh so strong as the gap stretches and it’s between the two former Amstel winners and world champions for the win with their erstwhile amigos now thinking about the sprint for third. Kwiatkowski and Gilbert still spell each other strongly inside two K with no messing around. 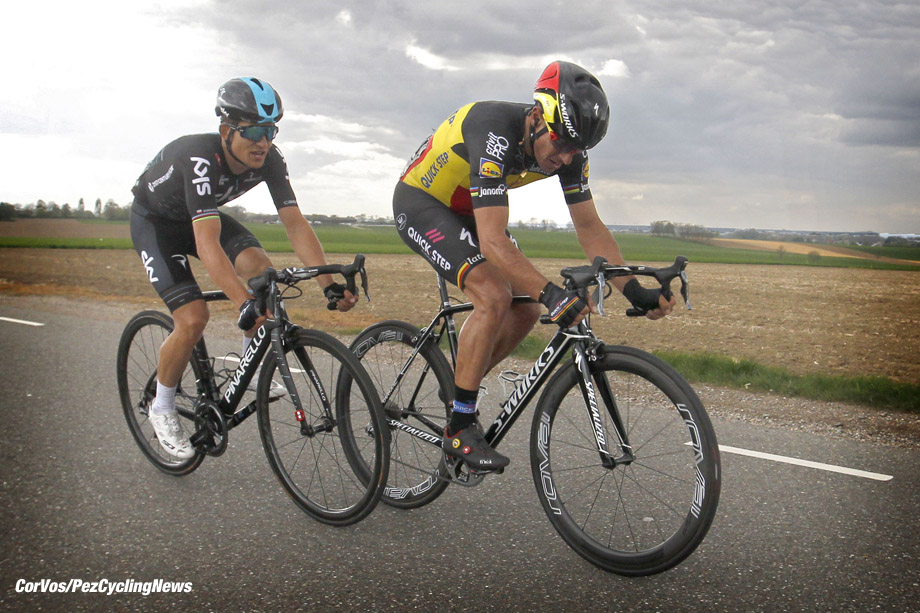 Red kite, Gilbert dials his shoes tighter and now the messing begins with Gilbert freewheeling and trying to coax the Pole through. Kwiatkowski ‘lays off’ track sprinter style – and goes! He opens a big gap but it’s a head wind and the man in red, yellow and black isn’t done yet, he fights hard, pumping those cranks, he draws level, looks to his right, he’s got it!

Meanwhile, Patrick Lefevere calls his favorite restaurant and tells them to get the champers on ice. . . 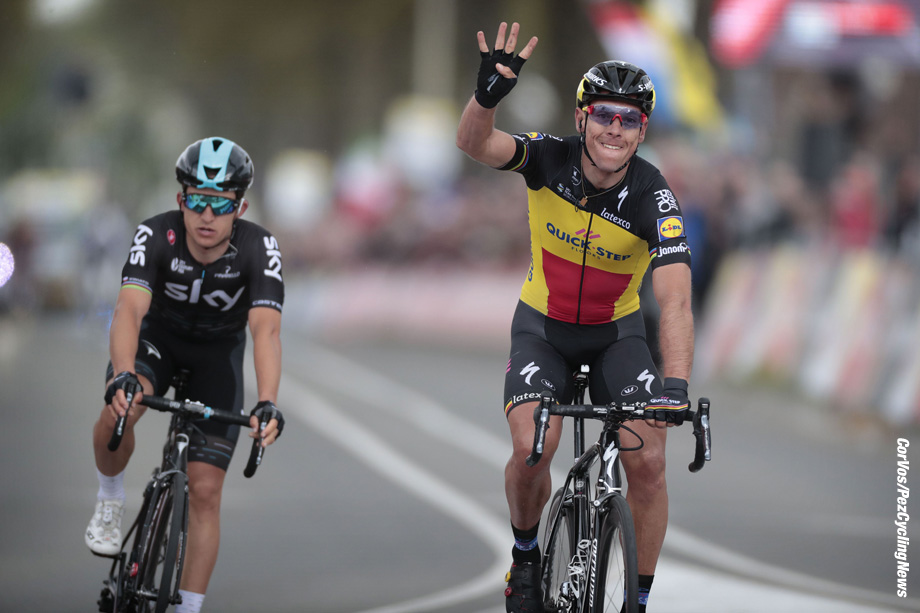