SANTA ROSA, CALIF. (May 21, 2016) – With thousands of fans lining the streets of Santa Rosa, Team KATUSHA’s star sprinter Alexander Kristoff (NOR) catapulted to a stage win, his eighth of the season, by a rim over all-time Amgen Tour of California stage win record holder Peter Sagan (SVK) of Tinkoff, who had spent much of the 109.1-mile day in a breakaway. The Amgen Breakaway from Heart Disease™ Women’s Race Empowered with SRAM also spent the day in Santa Rosa, with cycling’s winningest woman Marianne Vos (NED) cinching the victory for Rabo Liv Women Cycling Team.

“It was a hard stage…I was really struggling on the climbs… at the end, Peter [Sagan] was in front alone, and he had two minutes, and we had to chase hard. And at the end he almost beat me also, so it was an impressive ride by him but I just managed to hold him off, and I’m really happy to win here in California,” said Kristoff who earned a bronze road race medal at the 2012 Olympic Games.

With the men’s main peloton heading together into three downtown Santa Rosa circuits after 8,600 feet of climbing around the veteran Host City, no one gained time over race leader Julian Alaphilippe (FRA) of Etixx – Quick-Step Pro Cycling Team, putting the 23 year-old in good position to defend his Amgen Race Leader Jersey earned on the Gibraltar Road Queen Stage (3), with hopes of becoming the race’s youngest champion when the race concludes tomorrow in Sacramento.

“Today I think for me it was the hardest stage of the week, because I really felt the pressure on my shoulders…I had a lot of enemies today. But I finally stay in yellow for tomorrow, and it’s not finished yet but I’m really, really happy to keep my yellow jersey again today after a really hard stage…It’s not finished, so we will see tomorrow,” said Alaphilippe, who came in second overall in last year’s Amgen Tour of California, just three seconds behind Sagan.

The jersey competitions were mostly sewed up today, with the Lexus King of the Mountain (KOM) Jersey going to Rally Cycling’s Evan Huffman (Elk Grove, Calif.) after what was one of the most mountainous of all the Amgen Tour of California editions. In addition to his World Championship title, Sagan (SVK) has racked up Points classification wins at the Tour de France (4) and Amgen Tour of California (5), and will likely add to his collection with another Visit California Sprint Jersey this year. The SRAM Best Young Rider Jersey looks to be safely in the hands of Neilson Powless (USA) of the Axeon Hagens Berman Cycling Team, who sits in fifth place overall and retains the jersey for the fifth consecutive day.

“Today we knew it was going to be hard, and it proved to be the case. I had to really rely on my whole team to keep the race under control so I could get up the road and score some more points, and I’m really happy I was able to do it,” said Huffman.

Sagan (SVK) rode as part of a breakaway of six until he struck out solo with around 30 miles left to ride, increasing the gap to +1:30” over the chase and two minutes over the peloton at the 20 mile mark.

Sagan, sporting the Visit California Sprint Jersey which he’s held for the entire race, kept a +1:10” advantage over the peloton with 14 miles left to ride, and also picked up the Breakaway from Cancer® Most Courageous Rider Jersey today.
Sagan holds the all-time record for stage wins (15) at the Amgen Tour of
California, with Mark Cavendish (GBR) next with nine. The Team Dimension Data for Qhubeka rider celebrated his 31st birthday today out on the roads of Santa Rosa.

Back together, the group approached downtown Santa Rosa and three 2.5-mile circuits, with the cyclists riding at about 35 mph and the sprinters moving forward in anticipation of a bunch sprint at the end. During the second lap, Team Lotto NL – Jumbo’s Mike Teunissen (NED) launched an attack, but could not hold off the thundering peloton, though he held on to his position toward the front to take fourth place today.

In the final mile of the final circuit, two Team KATHUSA members led out Kristoff, flanked by Sagan, with Team Giant-Alpecin’s John Degenkolb (GER) nearby as well. The young team of Axeon Hagens Berman continued their week of aggressive riding with a couple of riders up front, including Tao Geoghegan Hart (GBR).

On the finishing straight, Kristoff took off toward the line; Sagan came close to overtaking him in the final meters as he launched his bike over the finish, but ended the stage in second by a tire rim. Team Sky’s Danny Van Poppel (NED) took third. Degenkolb pierced the top-10, ending the stage in eighth place as he finds his form following a severe injury. 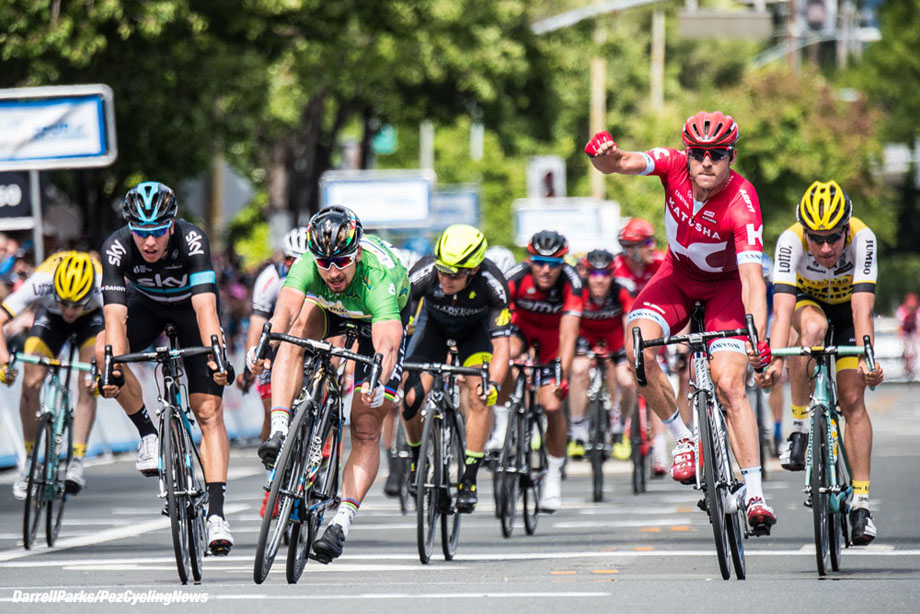 WOMEN’S RACE
The 97 women competing in the Amgen Breakaway from Heart Disease™ Women’s Race Empowered with SRAM also spent the day in Santa Rosa contesting a 64-mile twisting course that concluded with three lightening-fast circuits downtown that were lined with fans.

Stage 3 (of four), saw lots of early attacks that were foiled before a break could get away. Not until the second Queen of the Mountain (QOM) climb of the day on Coleman Valley Road did Wiggle High5’s Mara Abbott (Boulder, Colo.) and Boels-Dolmans Cycling Team’s Evelyn Stevens (Claremont, Calif.) get clear from the peloton. Abbott, the first U.S. cyclist to win the Giro Donne (2010), one of the women’s Grand Tours, quickly took a solo lead, with Stevens, the new women’s hour record holder, falling back into a chase group of seven that also included her teammate and race leader Megan Guarnier (Glens Falls, New York); four-time National Time Trial Champion and two-time Olympic gold medalist Kristin Armstrong (Memphis, Tenn.) of TWENTY16 – Ridebiker; Katie Hall (Oakland, Calif.) of UnitedHealthcare Professional Cycling Team; UCI’s number-one-ranked rider Emma Johansson (SWE) of Wiggle High5 Pro Cycling; Alena Amialiusik (BLR) of Canyon/SRAM Racing and Eri Yonamine (JPN) of Hagens Berman | Supermint Pro Cycling Team. The group caught Abbott with about 20 miles left to ride, and the former National Champion fell back to the main bunch, but not before shoring up the Lexus Queen of the Mountain (QOM) and Breakaway from Cancer® Most Courageous Rider jerseys.

“Mara attacked on the second climb… There was a small group that let Boels-Dolmans chase, so it was on me and Evie [Evelyn Stevens] to bring that back. I’m a little bit surprised it came back because it was a pretty good breakaway,” said Guarnier, the Boels-Dolmans race leader and National Champion.

The rest of the chase group soon was reabsorbed as well, with a main group of 25 barreling together together toward the downtown circuits in the hunt for a sprint finish. Attacks came hard and aplenty on the circuits, with UnitedHealthcare’s Linda Villumsen (NZL) riding up front and shutting them down. Bay area cyclist Ruth Winder for USA Cycling and 19 year-old Chloe Dygert (Bremerton, Wash.) of TWENTY16 – Ridebiker took short-lived leads, much to the excitement of the roaring crowds.

Coming into the final turn, TWENTY16 – Ridebiker and UnitedHealthcare Pro Cycling took over at the front to lead out their sprinters, but experience trumped all else today with cycling’s winningest woman of all time, Rabo-Liv Women Cycling Team’s Marianne Vos (NED) rocketing out from the pack to take the win. She was followed over the line by UnitedHealthcare’s Coryn Rivera and Johansson of Wiggle High5. A star of the junior circuit, Rivera has won 70 national titles, including her first elite level title as 2014 National Criterium Champion.

Vos’ win today puts her into the top-5 in the overall standings with one day left to ride. Guarnier held onto the Amgen Race Leader Jersey and gained three seconds on Armstrong (TWENTY16 – Ridebiker) (+:15”), with Stevens remaining in third place (+:25”), and Voss moving up from seventh to fourth (+:43”), just besting Rivera at (+:44”).

The four-stage, 197.8-mile road race, the first of only two U.S. events on the first-ever UCI Women’s WorldTour, will conclude tomorrow, along with the men’s event, with a 41-mile circuit race (20 laps) around Capitol Park in Sacramento.

Celebrating its 11th year, the Amgen Tour of California is the most esteemed stage race in the U.S. Amgen has been the title sponsor of the race since its first year.

As part of Amgen’s effort to honor and celebrate cancer survivors and to raise awareness of its Breakaway from Cancer® initiative, a Breakaway Mile walk took place today as part of Santa Rosa’s annual Luther Burbank Rose Parade. Led by one of America’s most recognized journalists, cancer survivor and advocate Joan Lunden served as Grand Marshal of the parade and was joined by 200 community members at the front of the parade to honor the millions of cancer survivors millions worldwide.

During Lunden’s battle with cancer she committed herself to being an advocate for those battling cancer. Through her work, she inspired others to protect their own health. Lunden opened up to the public about her personal journey with the hopes that she could offer support and inspiration and provide a better understanding of the cancer treatment process.

“What an honor to be part of Amgen’s Breakaway from Cancer and the Luther Burbank Rose Parade to help bring awareness to the resources available to those impacted by cancer,” said Lunden. “It was exhilarating to lead the parade and honor and celebrate cancer survivors and their families. The excitement in downtown Santa Rosa was remarkable!”

For more information about Breakaway from Cancer, visit breakawayfromcancer.com.

Amgen created Breakaway from Heart Disease™ as a complementary component to the Amgen Tour of California. The collective goal of the campaign is to fundamentally change the future of America’s heart health by helping people to find out more about their family’s history of heart disease and encouraging them to get active through cycling. For more information, visit breakawayfromheartdisease.com

Race fans can catch the May 22 conclusion live on NBC, follow along on the Microsoft Tour Tracker App for mobile and desktop, and connect with the race through all of their favorite social media platforms. Links are available at the Social drop-down menu at www.amgentourofcalifornia.com and fans can use #AMERICASGREATESTRACE to join the conversation.