Roadside California’17: The final stage of the 2017 Amgen Tour of California was another successful day for the Rally team. Two men in ‘The Break of the Day’ and the stage win to top the whole race off. Add to that the blue jersey for ‘Most Courageous Rider’ and a tie for the KOM prize it was quite a finalé. Day seven with Eric and George. 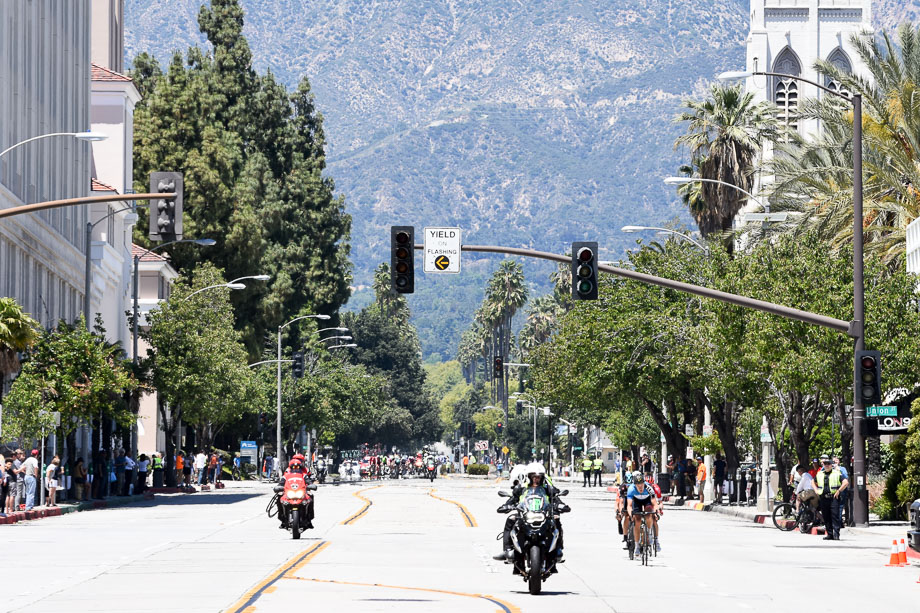 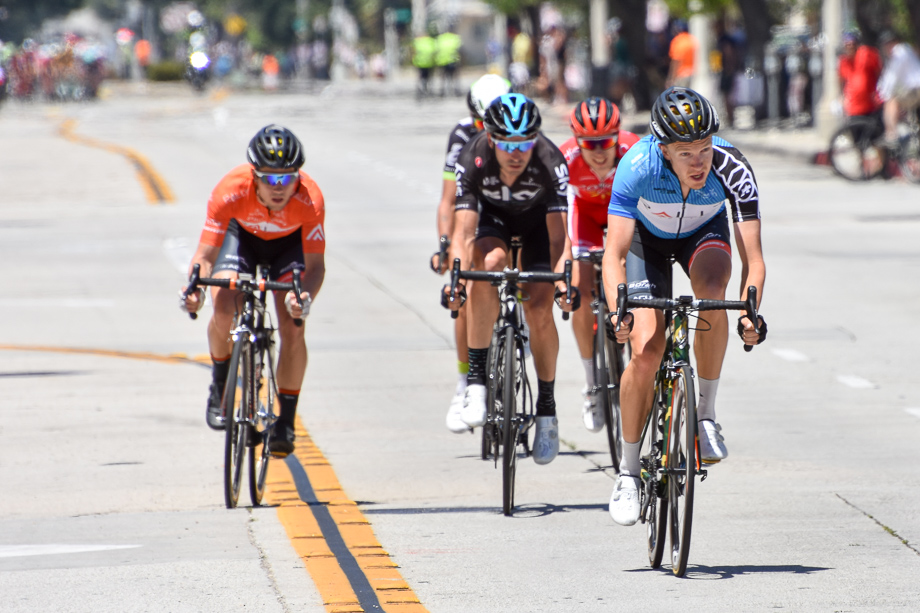 For the last two years Rally Cycling has worked with the UnitedHealthcare Children’s Foundation to create some amazing, one of a kind Diamondback bikes for their team to ride during the Amgen Tour of California. The bike designs, each individually hand-painted, are inspired by input from eight young recipients of medical grants from the UHCCF, and all proceeds go back into the grant fund. One recipient, nine-year-old Nathan, was able to attend the stage finish in Pasadena today and got to see his bike first-hand. He hung out with the team, scooped up some Rally apparel, and generally had an awesome time being part of it all. You could see so much joy on his face as he lifted the 14lb bike, painted like a green anaconda, and said, “It weighs less than me!” It’s great to win races, but it’s also really awesome to give back to the community in such a thoughtful way. 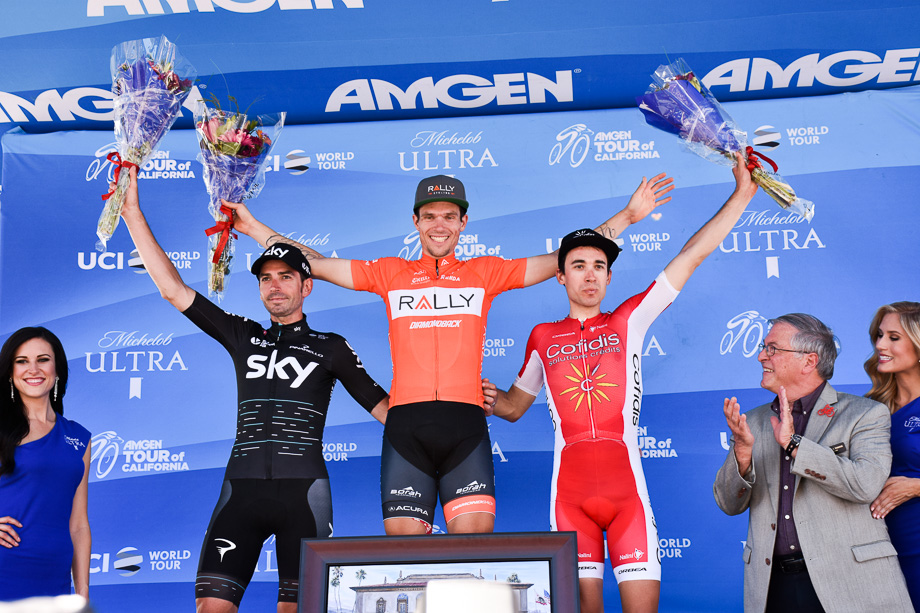 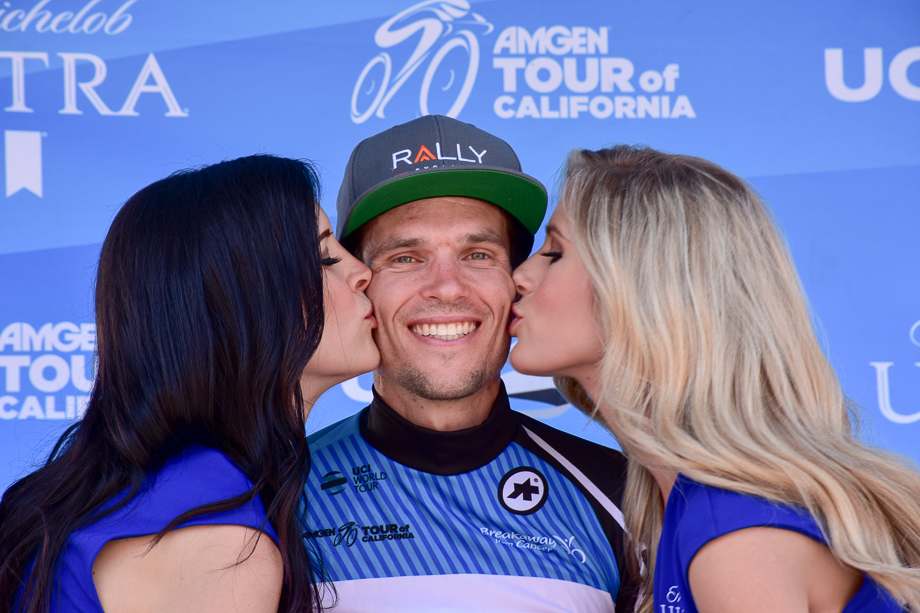 The Rally Cycling team had already seen plenty of success at this year’s Tour of California. The boys had been in every meaningful breakaway of the race, won a stage, drove the race up Mt. Baldy, and put in performances at the Big Bear time trial that most continental teams could only dream of. But, success can so often breed complacency, and nobody could have blamed the team for simply resting their tired legs on the final downhill stage. But as we know from the team’s performance history in big races, complacency is simply not in their vocabulary. And sometimes, a little success can breed a lot of freedom. 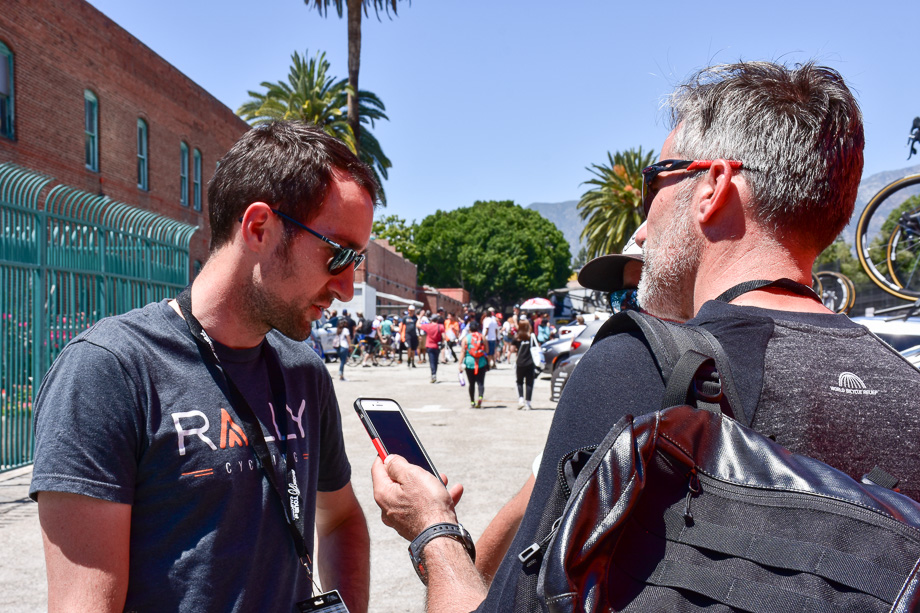 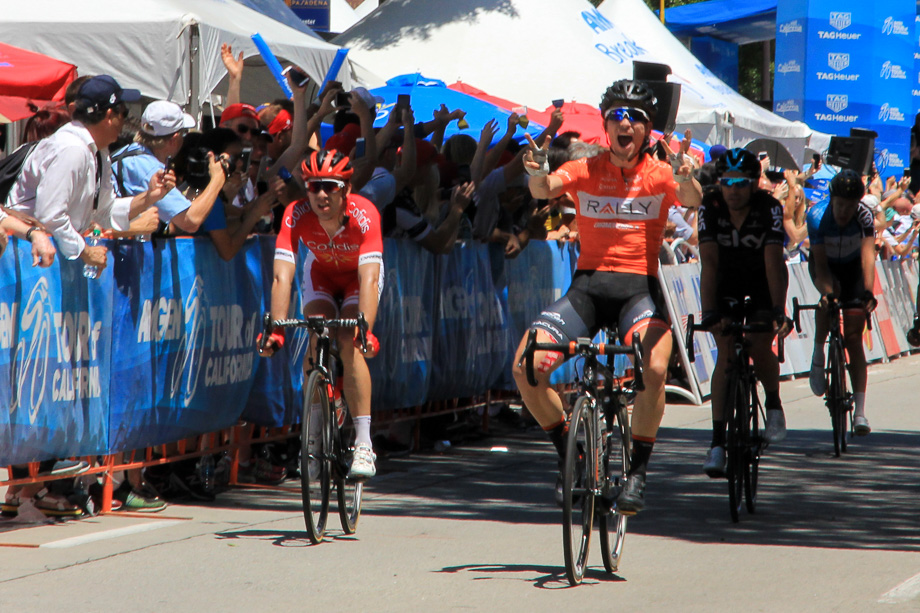 “I told the guys, no matter what, we go all-out”, said director Jonas Carney. “We’ve got nothing to lose. If you annihilate yourself working in the break and get time cut…I don’t care. Get in that break!” 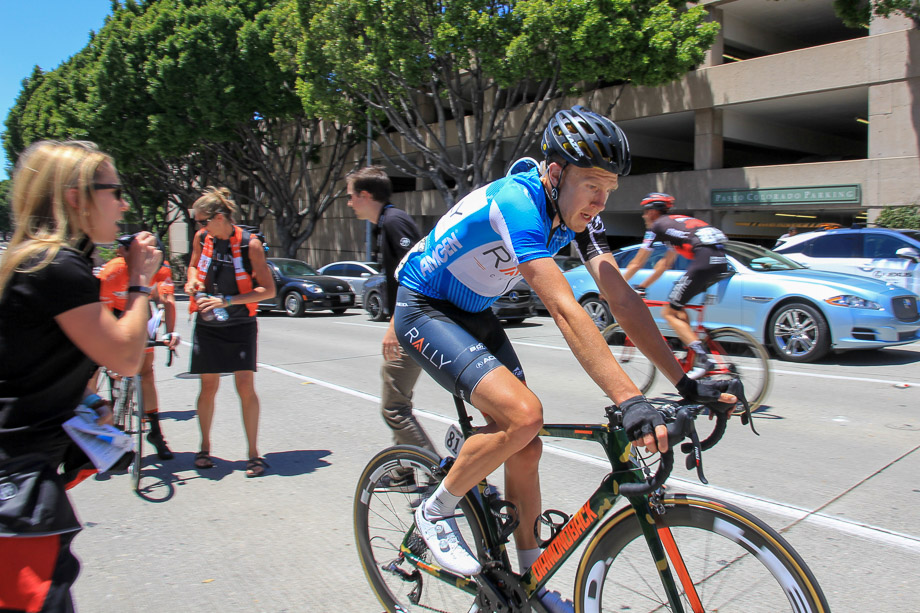 To nobody’s surprise, Rob Britton got in the break. A few minutes later, he looked back to see another rider bridging up. Who could it be? It was none other than Britton’s teammate, Evan Huffman, winner of stage 4 and Britton’s breakaway companion on the last two road stages. 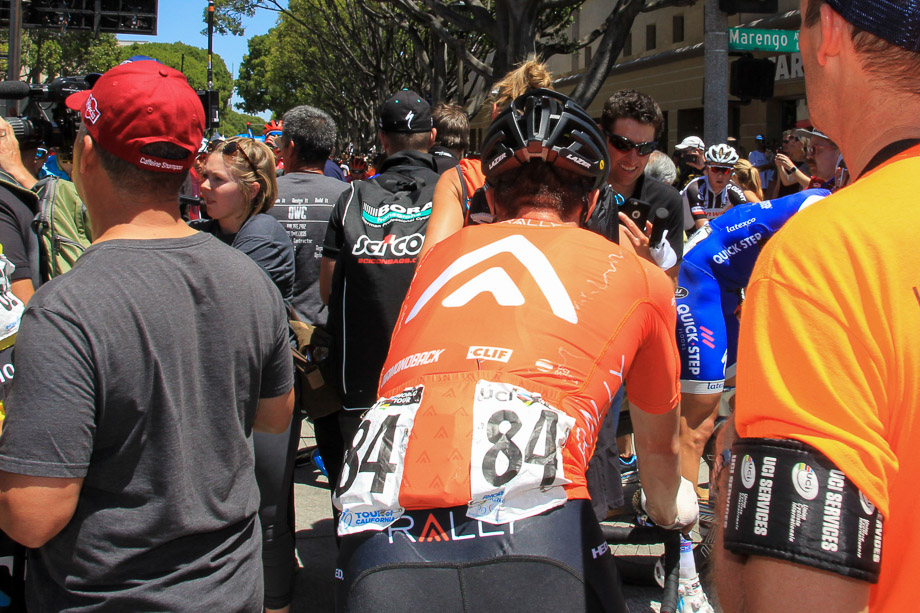 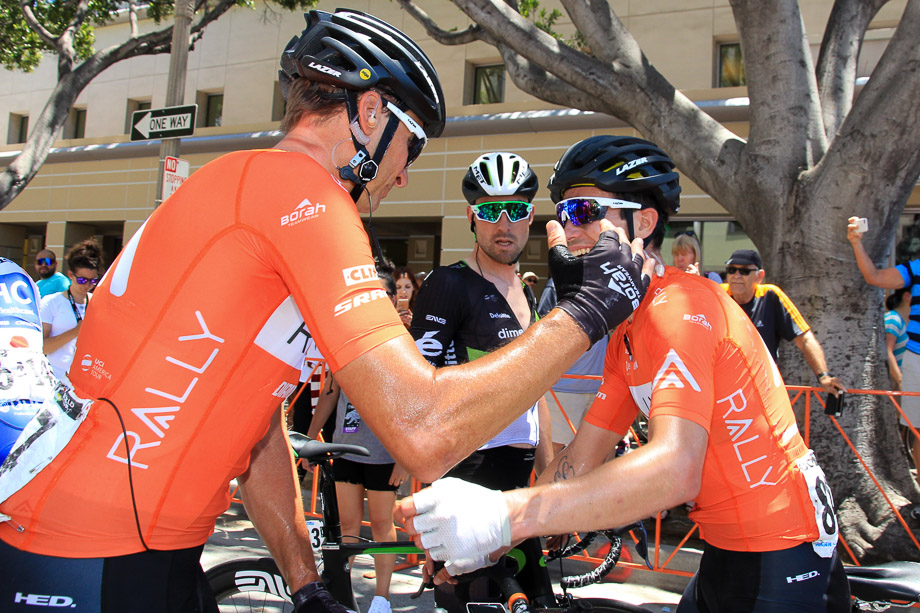 “It was like déjà vu all over again…AGAIN!” said a tired and laughing Britton after the stage.
Britton and Evans quickly went to work at the front to increase the gap, hopeful they could fully establish the break and slow the chase. Also in the move was Lachlan Morton, the highest-placed GC rider to make the lead group. While it’s often a disadvantage to have a legit GC contender in the break, Morton had suffered two dramatic equipment failures in the previous day’s time-trail, losing considerable time and the Best Young Rider jersey. He was not happy, and he was in the break to ride. 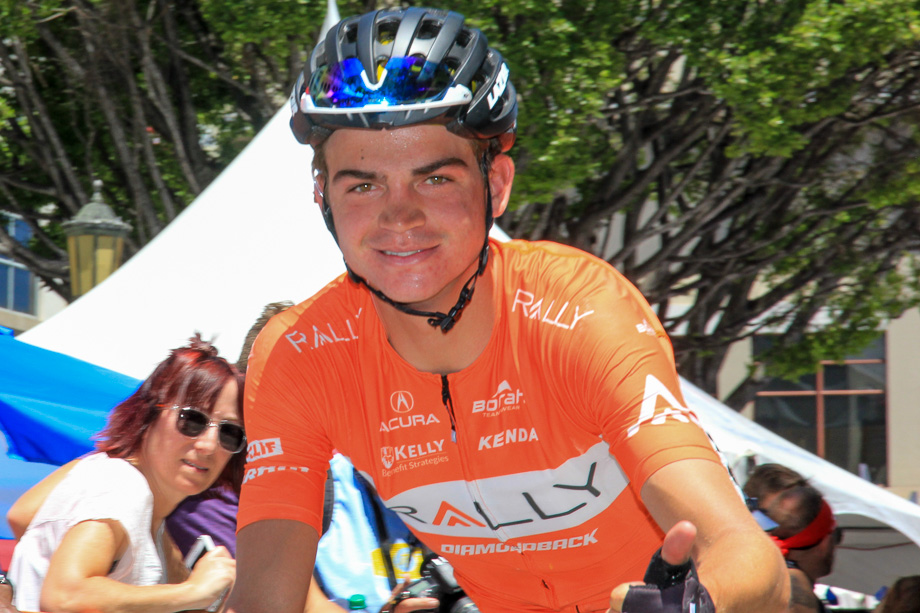 Bike racing tactics can be complex, and today they worked in Rally’s favor. Since Morton was in the break and only a couple minutes down on GC, it was up to the team with the yellow jersey, LottoNL-Jumbo, to push the pace and ensure their leader, George Bennett, wouldn’t lose the overall on this final stage. However, all Lotto had to do was keep Morton close – they had no real interest in working for the stage win. Once the breakaway was brought back to a manageable distance, they pulled on the reins, comfortable with the situation. The unintended consequence of Lotto’s hard pace on the climbs – and for a stage billed as a downhill run to the finish, it certainly had a lot of climbing – was that most of the sprinters had been dropped. Both Peter Sagan and John Degenkolb managed to hang on, but their teams were either unwilling or unable to bring the race back together. To make things more interesting, Rally had bridged young climbing ace Sepp Kuss to the break to aid in the pace-making. With the overall jersey secure, most of the sprinters dropped, and the motivated breakaway group working well together, the chase was simply not concerted enough to succeed. 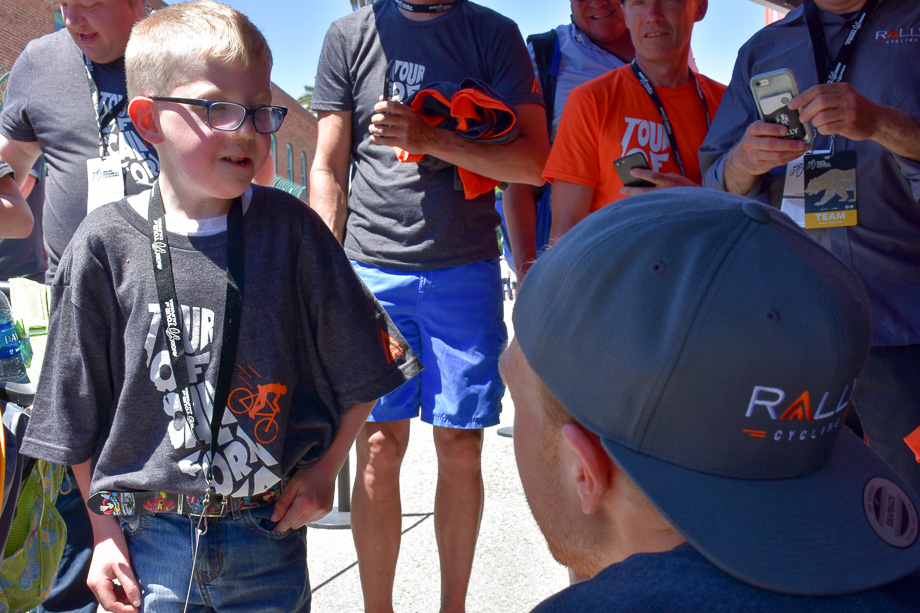 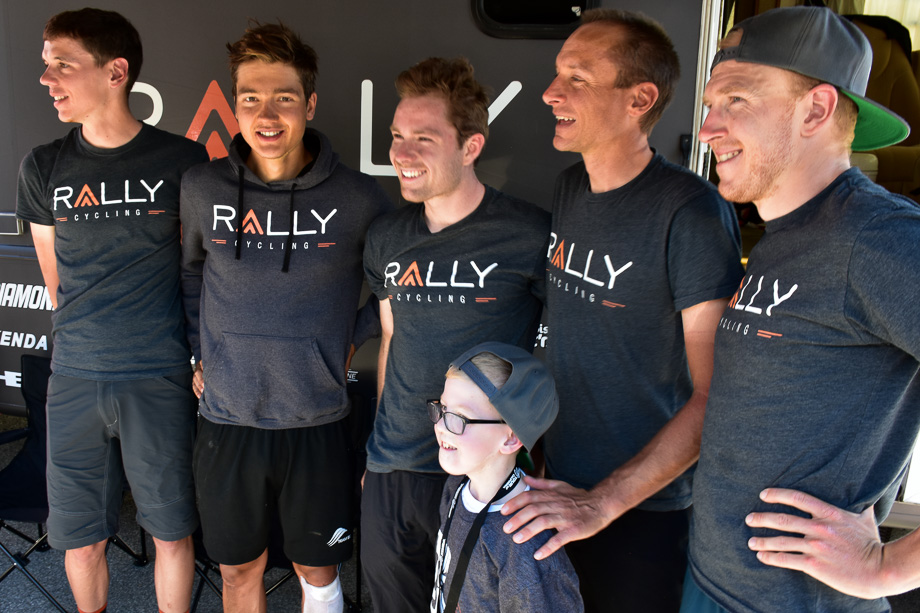 As the breakaway riders stormed into town, Britton and Morton wanted to squash any chances of a cat and mouse game, and they drove the pace hard down the long straightaway on Los Robles Avenue. Strangely, the race result seemed like a foregone conclusion, as if it were Rally’s destiny to win the on the day. They forged the break, they put three riders in it, they pushed the pace. Now all they had to do was finish it off. And they did. Britton gave one last effort as they headed past the 1km-to-go sign. Sky’s David Garcia Lopez lead it out around the final turn but couldn’t hang on as Evan Huffman came around him for his second stage win! 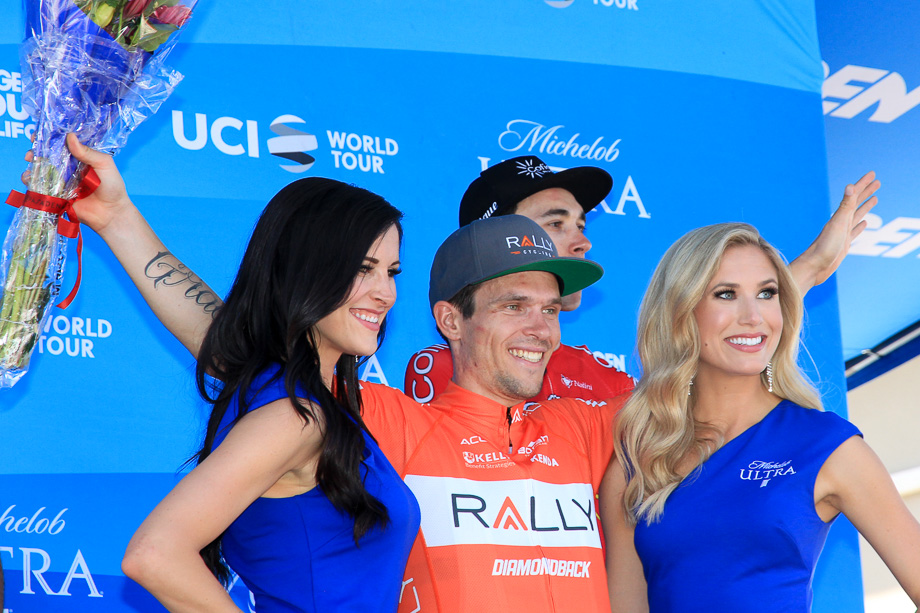 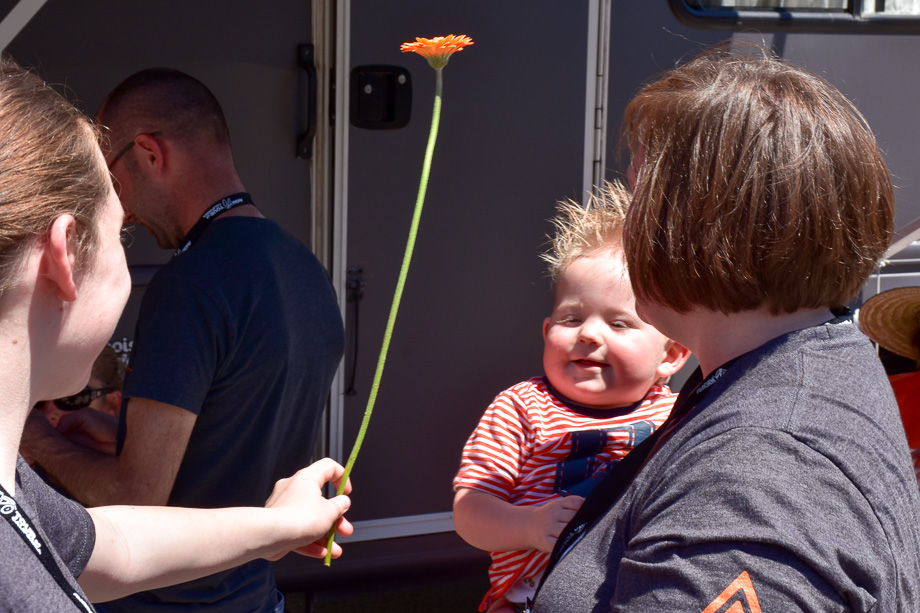 Phew! What a week! While hanging with the team in New Mexico as they dominated the Tour of the Gila, we wrote that the World Tour teams had better not underestimate the Rally boys in California. However, we never dared to dream they could win two stages and animate the race the way they did. What an amazing accomplishment for the all-North American continental team. Look out Utah and Colorado!
Oh, and what was young Nathan’s favorite part of the day?

“When the Rally team won!” Of course.

Today was a good day. 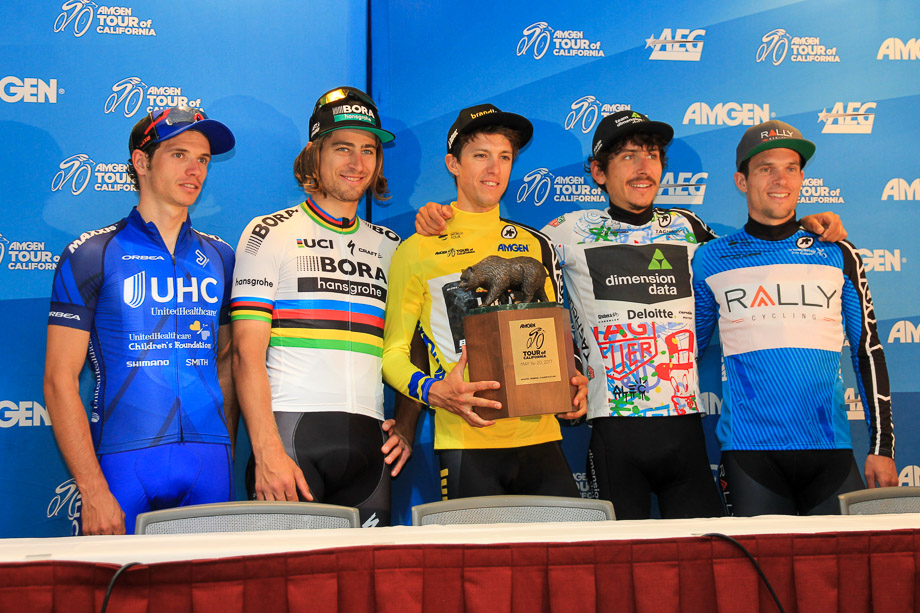