Part two of Ed Hood’s ‘night job’ in Berlin at the velodrome and the action was full on for days’ two and three of the German ‘6 Day’. The big motors were out as were the sprinters, the beer, the flowers for the winners, plus a Berlin bear!

It’s hard for the old dude, he really needs both hands to get down them stairs safely but that would mean abandoning his fifteenth Schultheiss beer of the night – no dice! 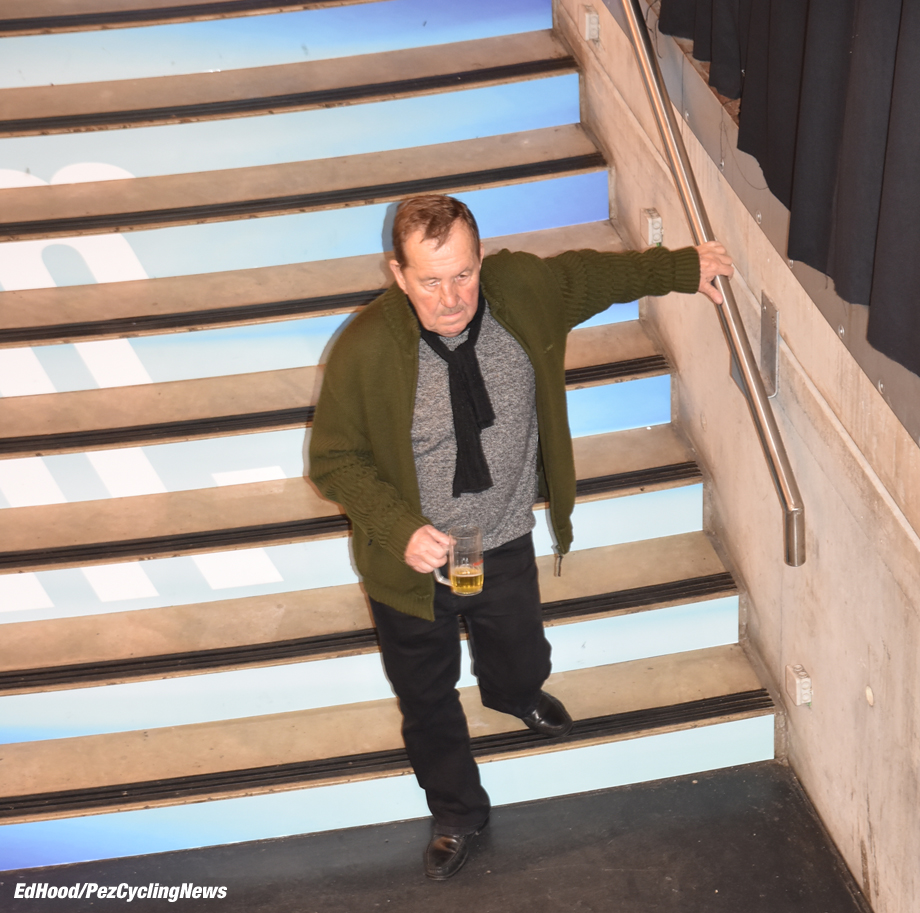 God knows how he got back up the stairs to the exits. 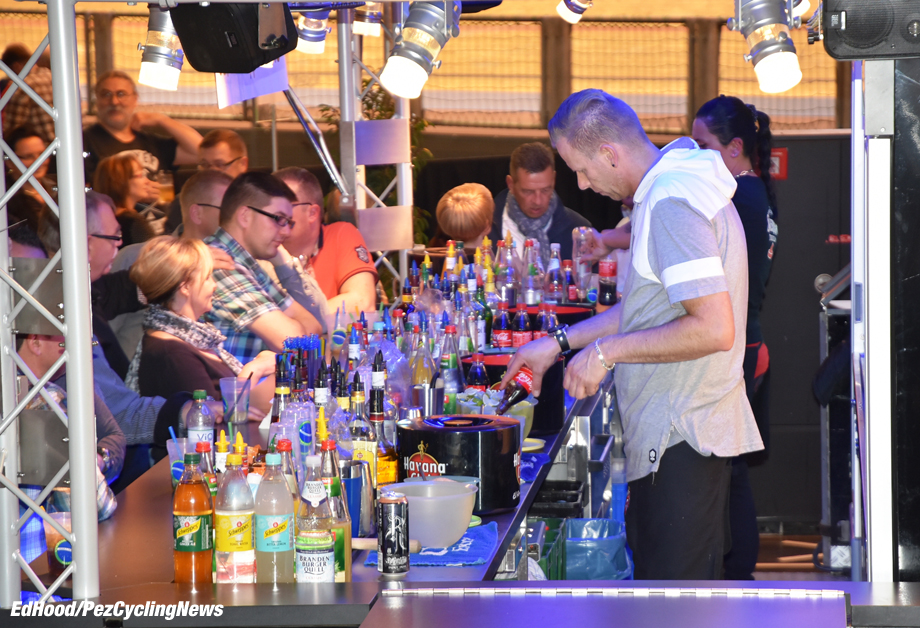 Night two ended as it should with no one watching the final sprint series or Derny, just the hard core drinkers in the track centre in little huddles and the security guys huckling a nutter out. Meanwhile, Kris had started the washing as I was on my nightly trip to the toilet to empty and clean the “you know what” pails at chasing 02:00 am. The Six Days – you don’t do it for the money, that’s for sure.

Night one is already a bit of a blur – it always takes a bit of time to get in the groove. The time table; the grub, the drinks, the clothing routines, the washing, the sleep deprivation, the noise. . .

I’d forgotten how many decibel them big motors produce – it’s not just the actual race, they spend 10 minutes getting the Bee Emm Beasts into the correct line astern formation before the gun goes and the mechanics try for a heart attack as they push start their riders; who have to get on top of those big gears as quickly as they can without going into the red too early. But the Berliners love their ‘steher’ racing. 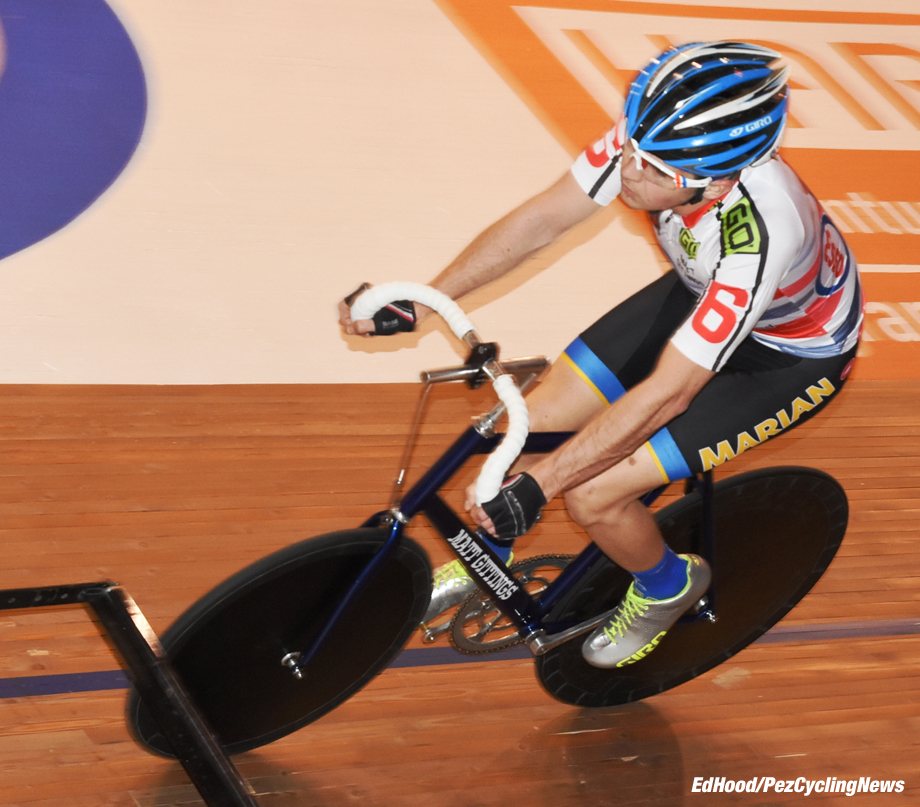 English man, Matt Gittings is making a fist of it but it’s hard to win here if you’re not from Germany. . .

And somehow our cabin became the social hub of the Six Day; there was Pete Jacques – of course – Spokes Cycles’ Craig Grieve who Mark Stewart rode for back in 2014, Mark McKay from Scottish Cycling and Scottish ladies Charline Joiner and Neah Evans who are riding the ladies’ races. No chance of getting bored – or a seat – on this gig. 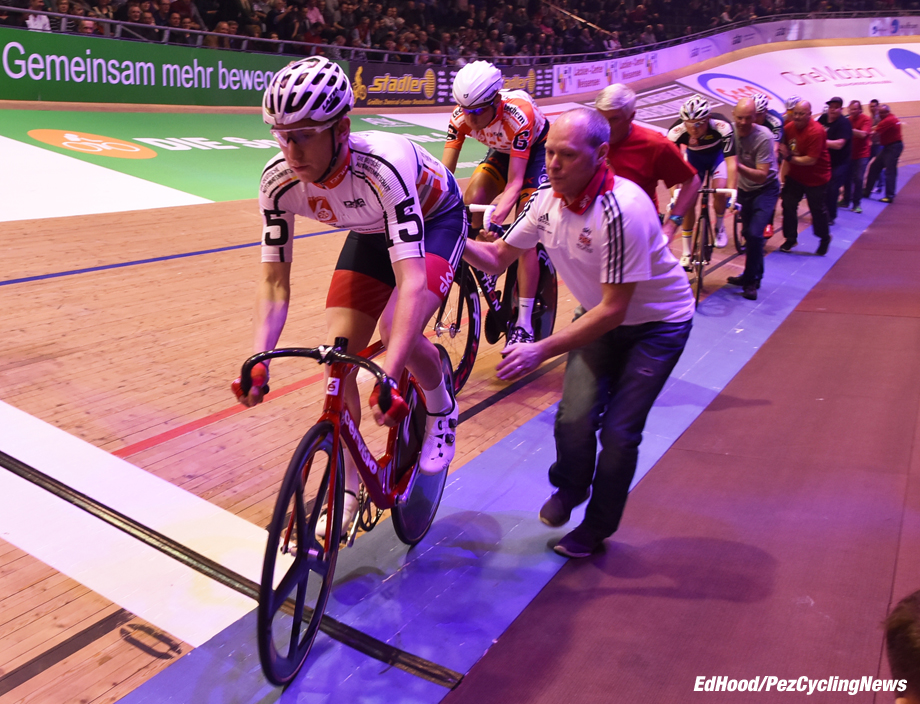 Craig tried his hand at pushing off in the Derny; you’ll need to ask Craig how he did – my first effort didn’t have any of the Derny Kings queuing up to sign me either. . .

Night two started with the sprinter’s flying lap. There’s something in the German psych which attracts them to big men dropping like stones off the banking in search of ever quicker lap times. One of the East European sprinters looks like he’s just been plucked off a building site – you’d think twice about hooking that lad. Down in the track centre the middle-aged guys in their Slayer T-shirt and ponytails roar their approval as Forstemann goes top, again. The other guys get AC/DC, Status Quo or Queen: Robert gets Rammstein – no contest! 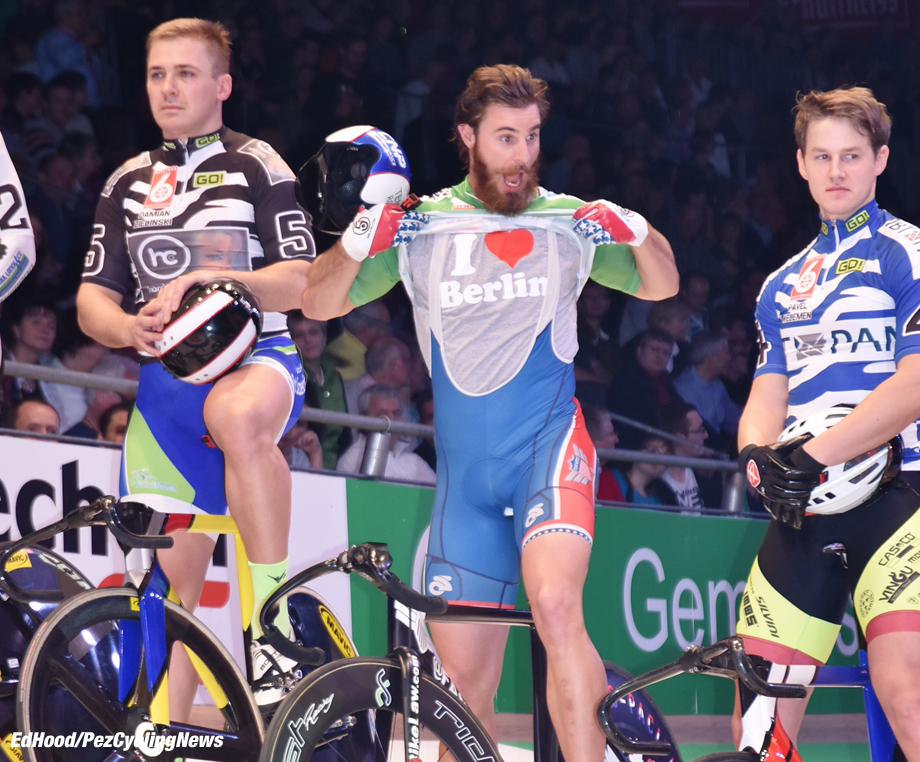 California’s Nate Koch may not be the quickest sprinter on the planet but they just love that dude in Berlin – maybe the T-shirt helps? 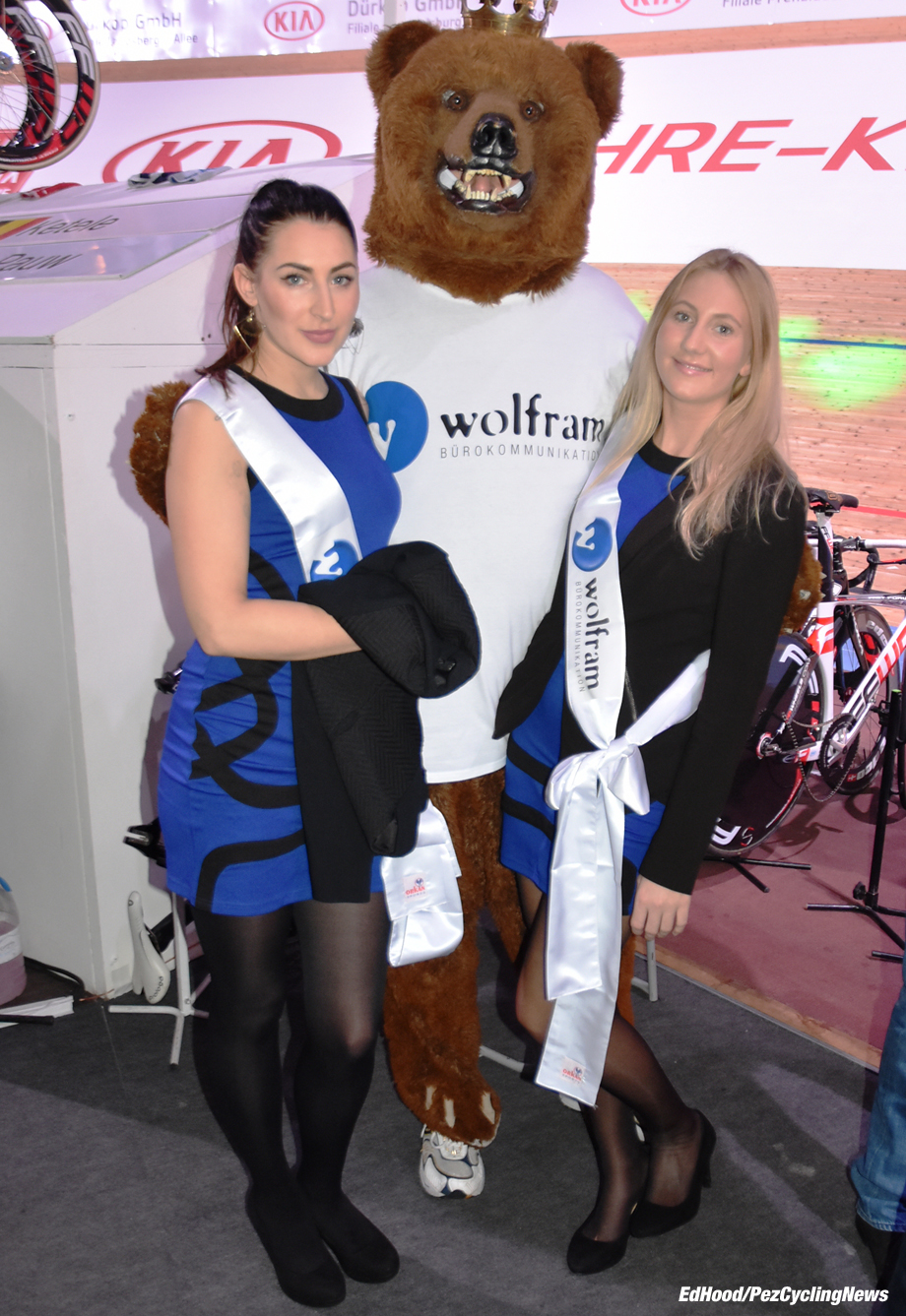 But the girls here have strange tastes, the best looking girls in the place are dating a damn bear! 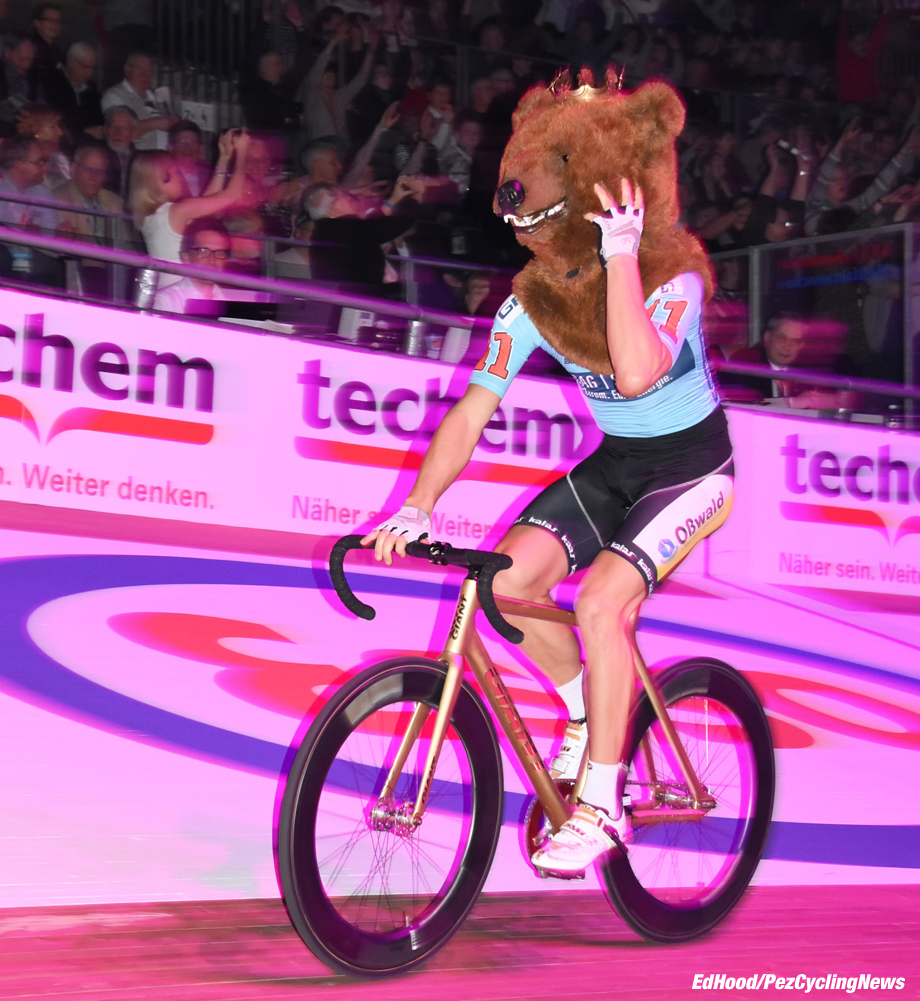 Mark you, being a bear seems to be the cool thing in this city with Marcel Barth going for the “grizzly look” in ‘La Ola’ – the ‘balustrade’ they call it in other sixes where the riders track the fence and generally mess around prior to the last chase. Mean times the classment is starting to gel, now with five teams looking like the top of the board. 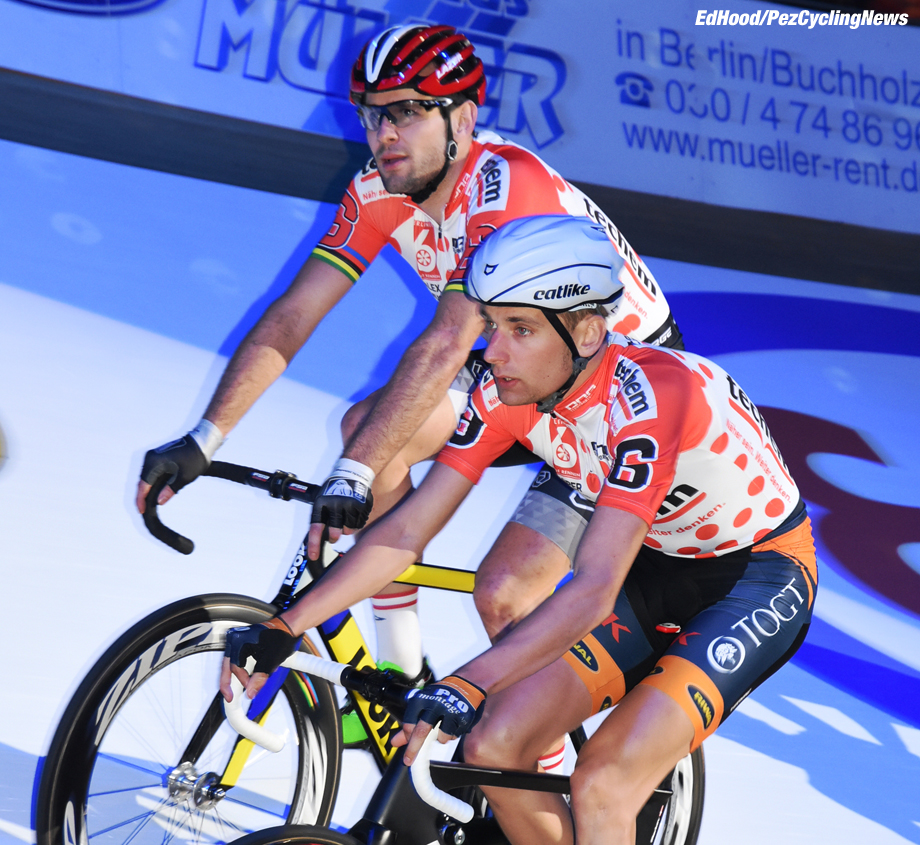 Jesper Mørkøv and Alex Rasmussen (both Denmark) on paper looks like a fair bet; Jesper is no longer ‘Michael’s little brother’ he’s matured in into an accomplished six day man but the Alex Rasmussen who won this race in 2010 with Mørkøv Senior isn’t the one we see here. . . 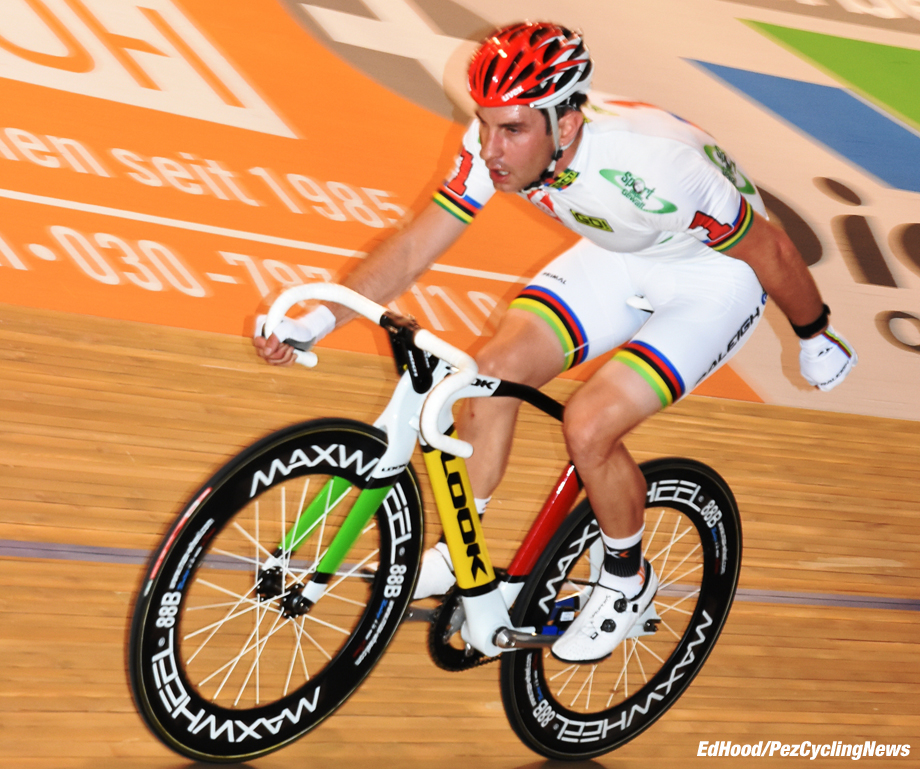 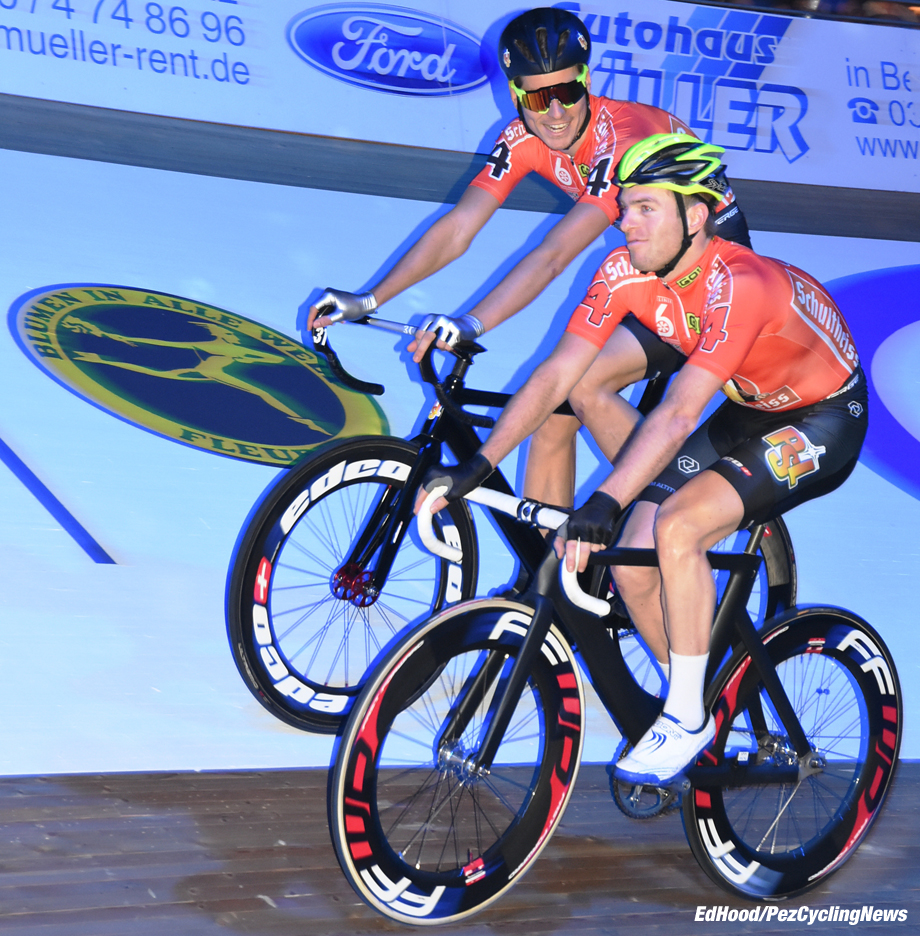 Yoeri Havik and Nick Stopler (both The Netherlands) are a solid pairing – Havik on two wins off 23 starts and Stopler on one win off 25 starts – they look like third to us. Second? 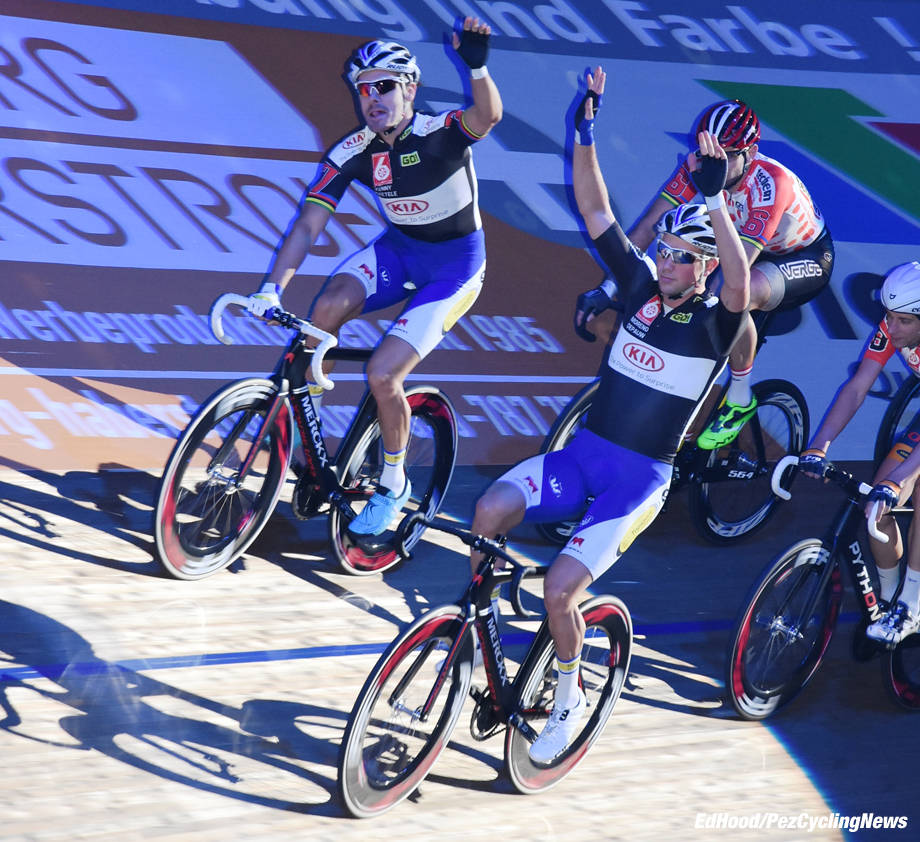 Belgies Kenny de Ketele and Moreno de Pauw; Kenny is as close as you’ll get these days to a Risi style ‘Capo’ – he’s won nine off 60 starts. London fell to the pair with de Pauw taking that one win he boasts off his eight six day starts. The young Belgian is quick, very quick – he holds the lap record for Gent and paired with ‘big diesel’ Kenny they’re a formidable coupling.

Kenny has won here before, in 2014; the ‘but’ is a big one, he was paired with Berliner Andreas Muller. If you want a Belgian on the podium prior to Kenny, you have to go all the way back to Etienne de Wilde in 1999 when he won when paired with – Andreas Kappes. Yes, you guessed, Old Andy is German, too. The last all Belgian win was 1977 when – bow your head – Eddy Merckx and Patrick Sercu won. Standing room only for that one. Given those stats we think there’s only one team going to win here. 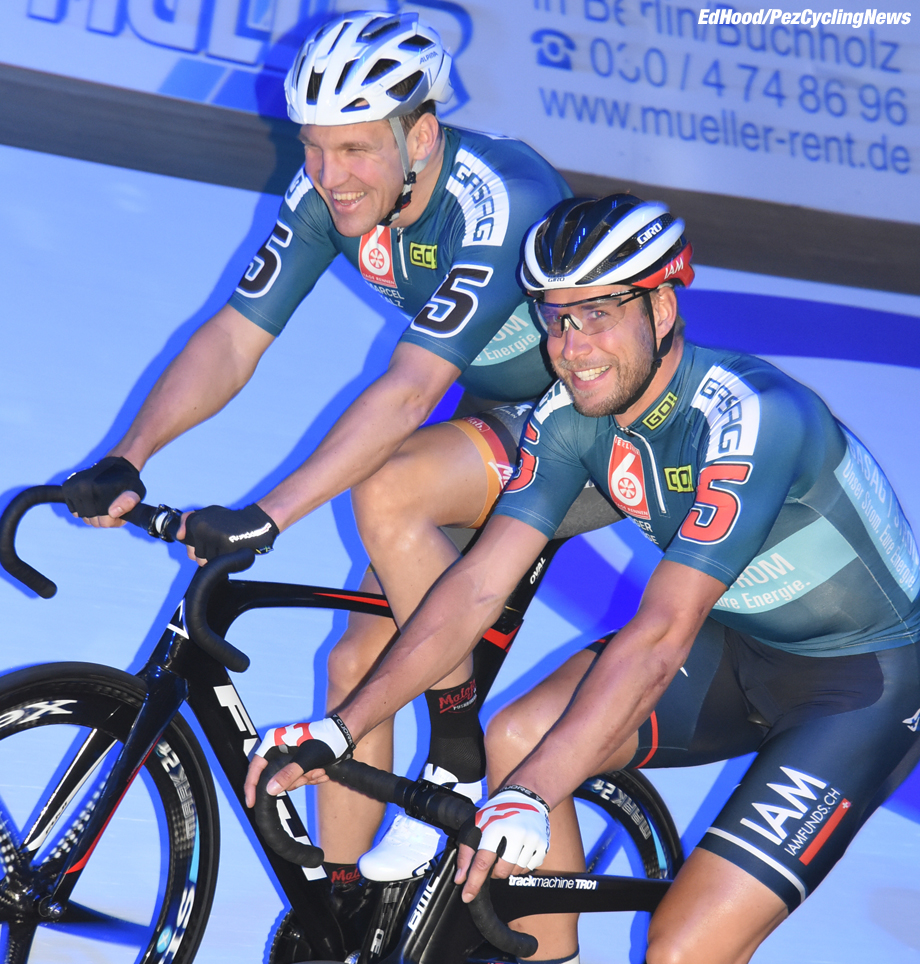 Home boys, Roger Kluge and Marcel Kalz both have four wins; Big Rodge off 20 starts, ‘just as Big’ Marcel off 25 starts. They’d be my bet for the win, Rodge has won here twice before, with big Bob Bartko in 2011 and ‘Flying Dutchman’ Peter Schep in 2013. You know, I once tried to place a bet on a six day result. But my amigo, ‘Big Pete the Bookie’ explained; “they won’t take bets on six day races, they know that those boys are all dodgy b**tards!’ Oh well. . . 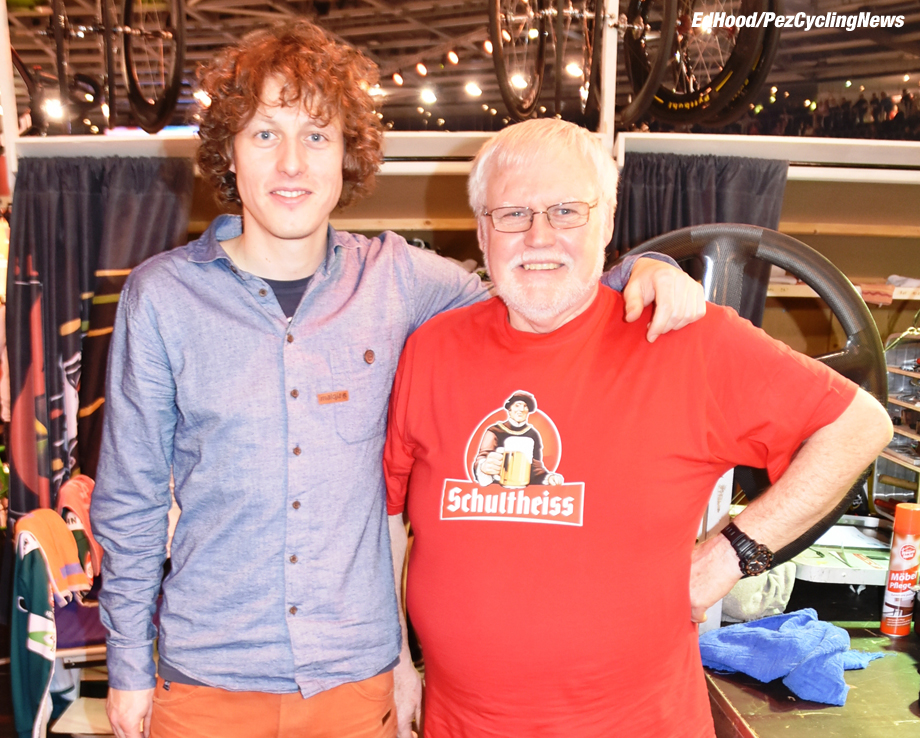 We had one final guest, a former client of ours, Czech road and track rider Martin Hacecky. He’s on the mend after a bad crash and will be picking up his commentating career with Czech Eurosport for the Tour of Valencia. Day Three and Germain gets a bit tired of people saying; ‘I knew your father, he was a good six day rider.’ Like I said, it could be worse, his dad could have been a serial killer. . . 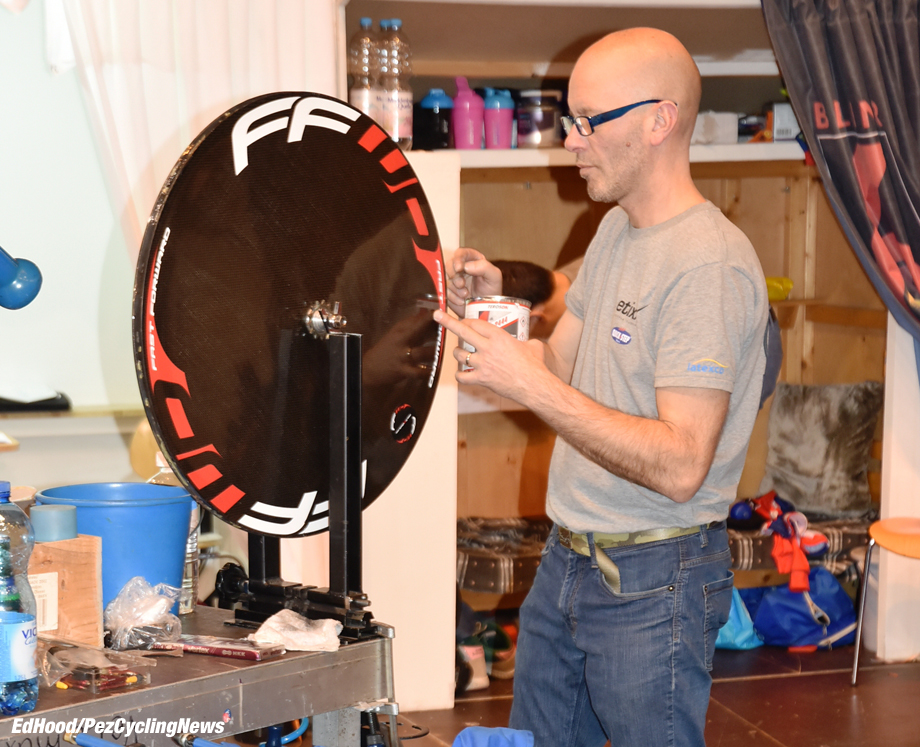 I was chatting to Dirk Dekeyser tonight, six day mechanic par excellence. He’s moved on from Topsport to Quick-Step with his ‘summer job.’ “Like the difference between a decent Belgian football club and FC Barcelona!” But apparently it takes two trained mechanics three hours to assemble a Venge with all the concealed cabling and wiring. As I’m chatting to Dirk, Alex Rasmussen hurtles in and is violently sick in his cabin – that’ll be the end of him for tonight – neutralized ’til Sunday.

And to go with the ‘motorized doping’ scandal from the X Worlds, we have our own scandal – the winners of the U23 race here have been DQ-ed. One of the young lads punctured and his mechanic gave him a wheel with the wrong sprocket, consequently he failed the post-race gear check. . .

Mark Stewart wasn’t chuffed with how some of the other teams were riding against him and Germain – being a forthright young man he asked to speak to Kenny de Ketele. 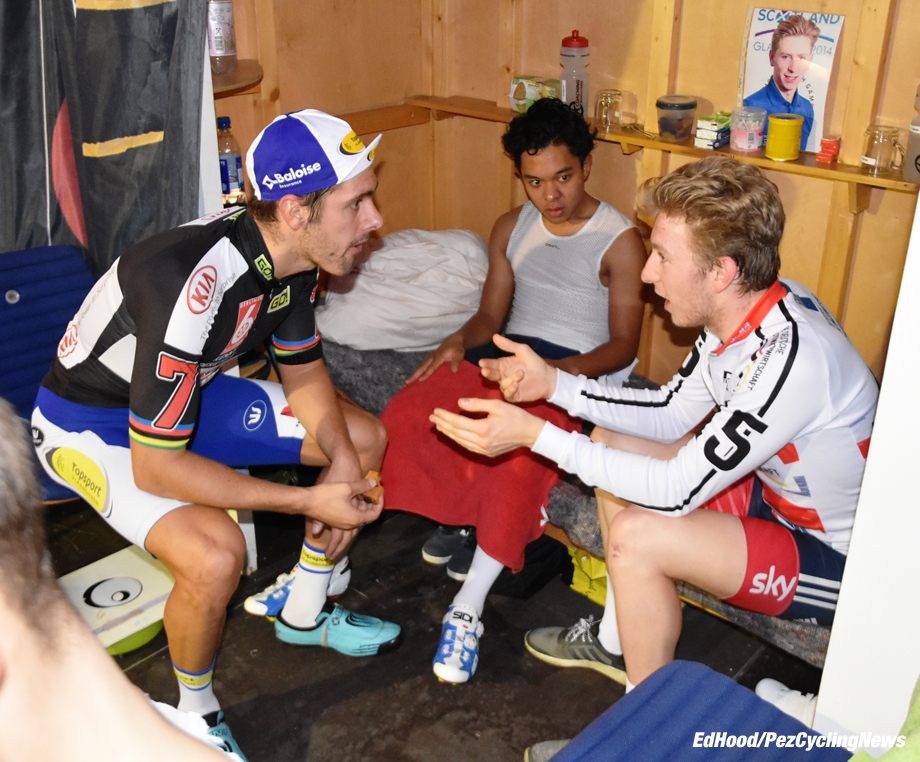 Kenny duly arrived and the air was cleared – ’til the next chase, at least. 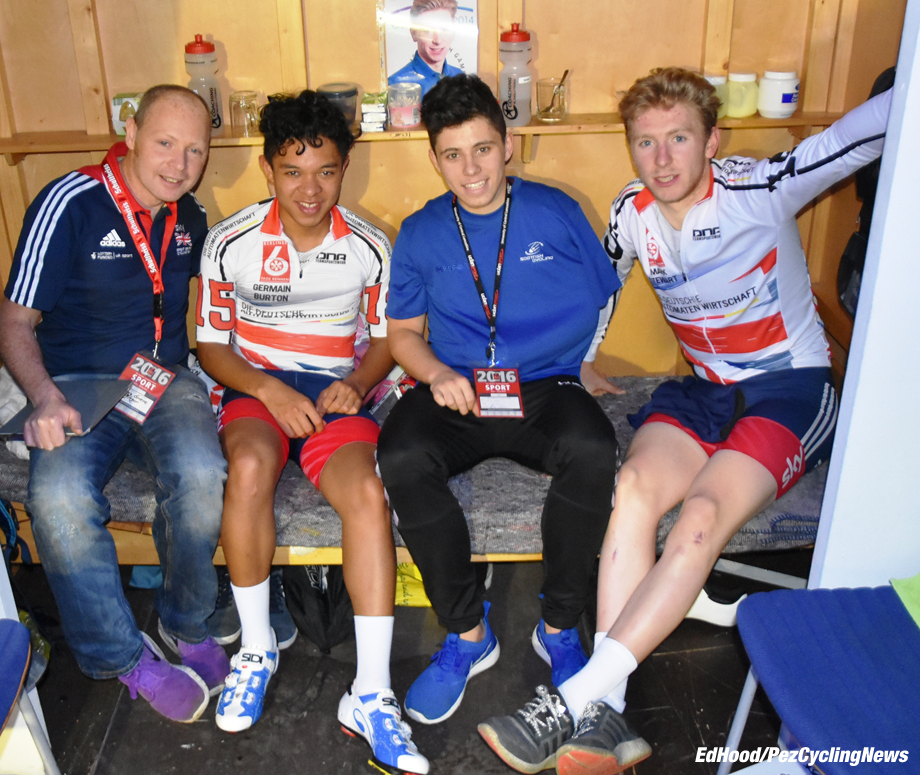 Ruari Yeoman came to call too, he was riding the U23 race for Scotland but came down heavily and broke his collarbone – he’s young, he’ll be back. 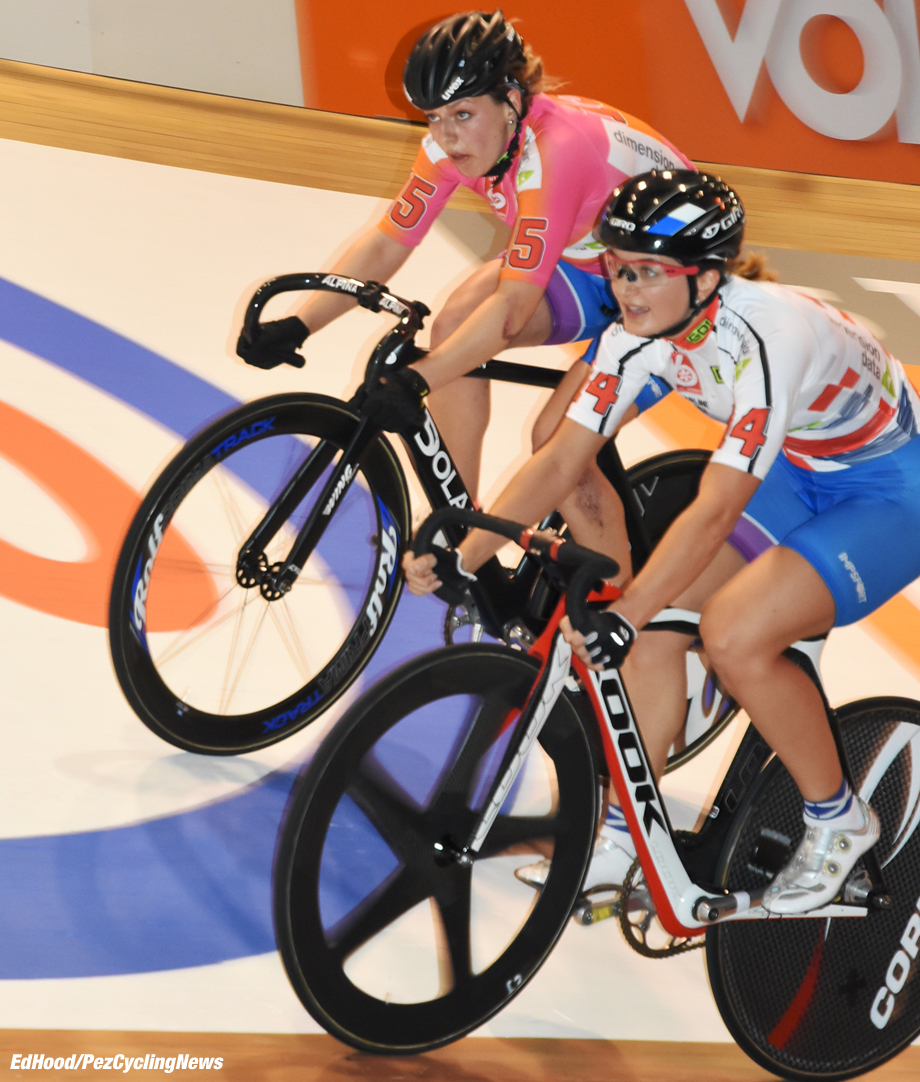 As well as the U23, ‘stayers’ and sprinters there’s ladies’ racing on the agenda with Scots girls Neah Evans and Charline Joiner both riding well. 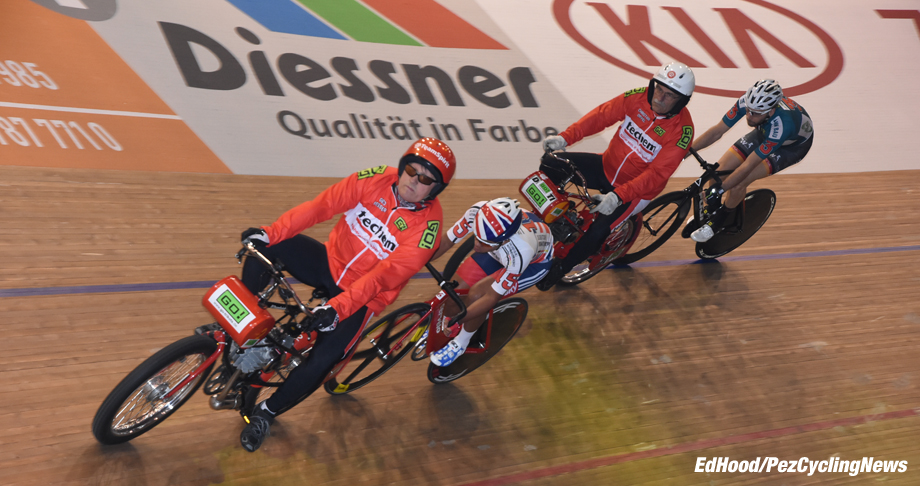 Derny time and Germain’s pacer takes him out the gate like a ferret – always a bad sign. And sure enough, our boy ends up waaay back with Big Rodge winning by a street – surprisingly. . .

Despite the sad predictability of the Derny, the music is good – Alcazar, ‘Crying at the Discotech’ a six day classic tune. The big chase is early, before the stayers and the programme rather peters out after that with just Daniel up for the last Derny. 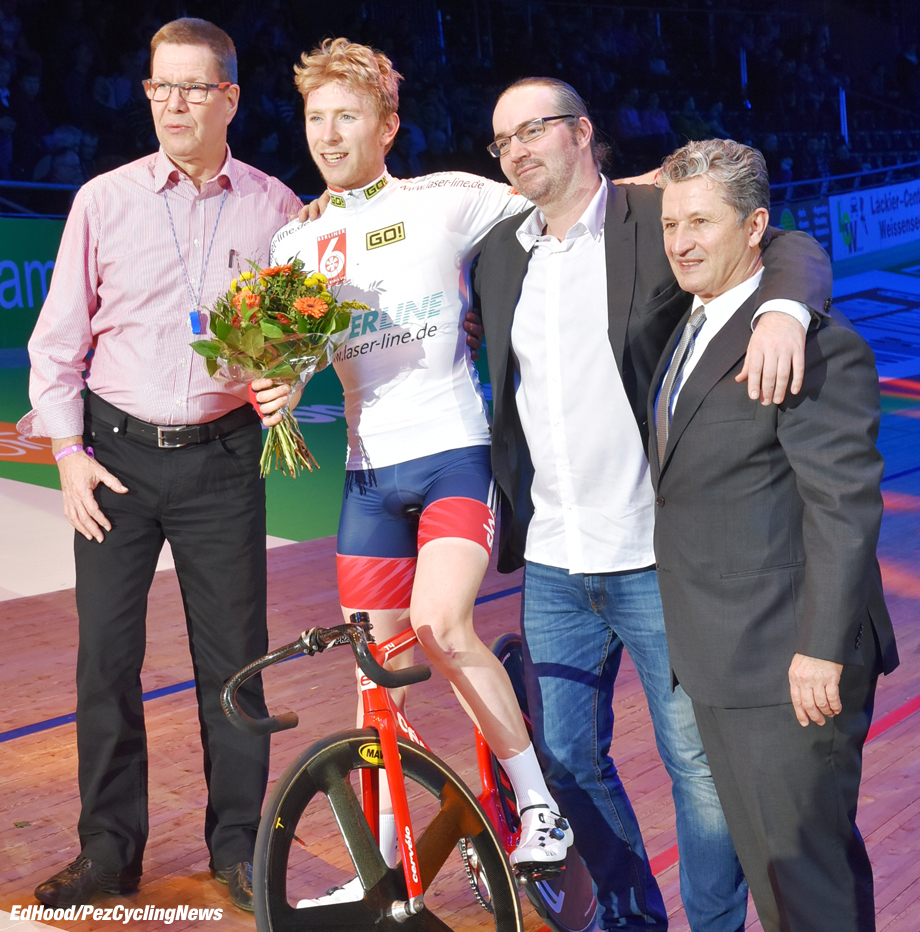 But Mark wins the scratch; then chucks the flowers to some German Lovely – those young boys!