It’s Six Days season in northern Europe, with racing ’round the boards keeping riders fit & fans entertained for days on end.  Ed Hood’s pulling his annual shift working for two teams in Berlin, and filing the action for PEZ…

Robert Forstemann tracks the fence, the crowd whistles approval, German heavy metal legends Rammstein pump from the PA as the chunky German sprinter dives for the line; it takes him just 12.746 seconds to thrash the 250 metres – fastest of the night and the crowd APPROVES! 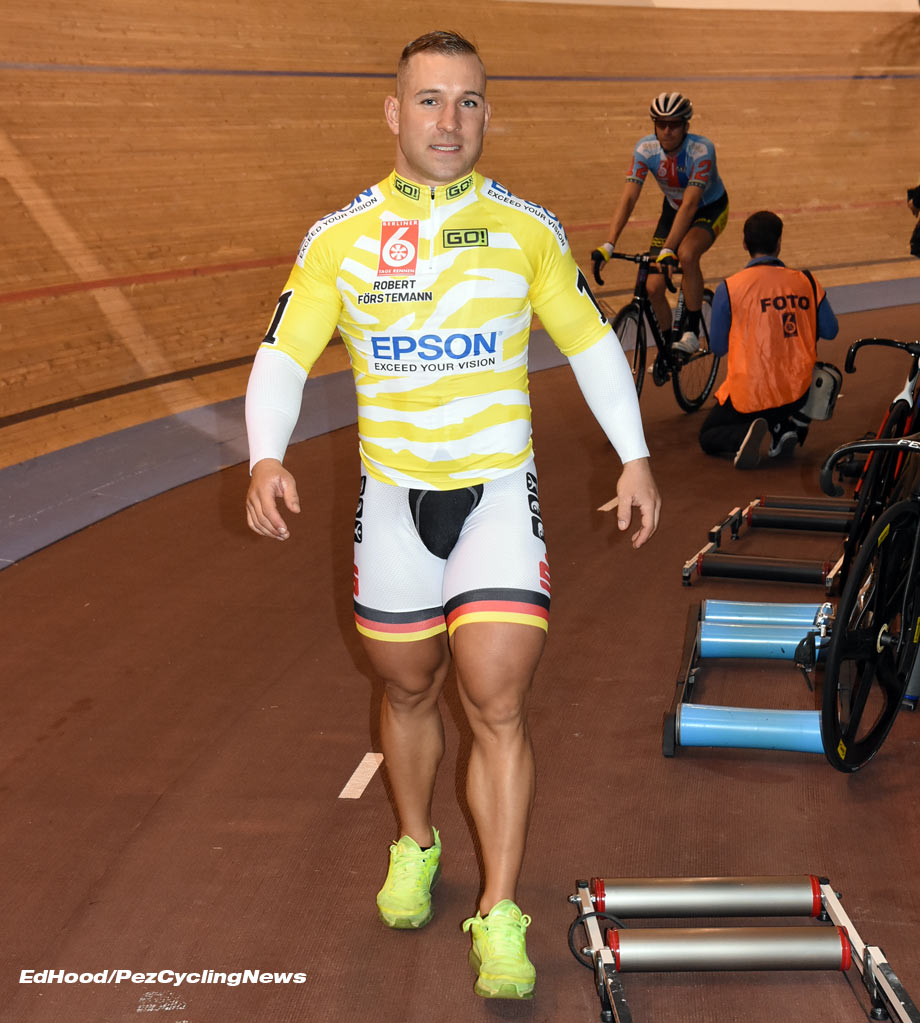 Big Bob Bartko, Erik Zabel and Didi Thurau may all just be memories now but it’s still pretty cool to be in the velodrome on a sell out first night with the music, the lights, the people, the beer and the speed.

The first night of the six day was actually pretty cagey with the teams keeping their cards close to their chests – it’ll become clearer as the week goes on. We’ll be here in Berlin for the duration and at the final race of the winter season, Copenhagen next week. 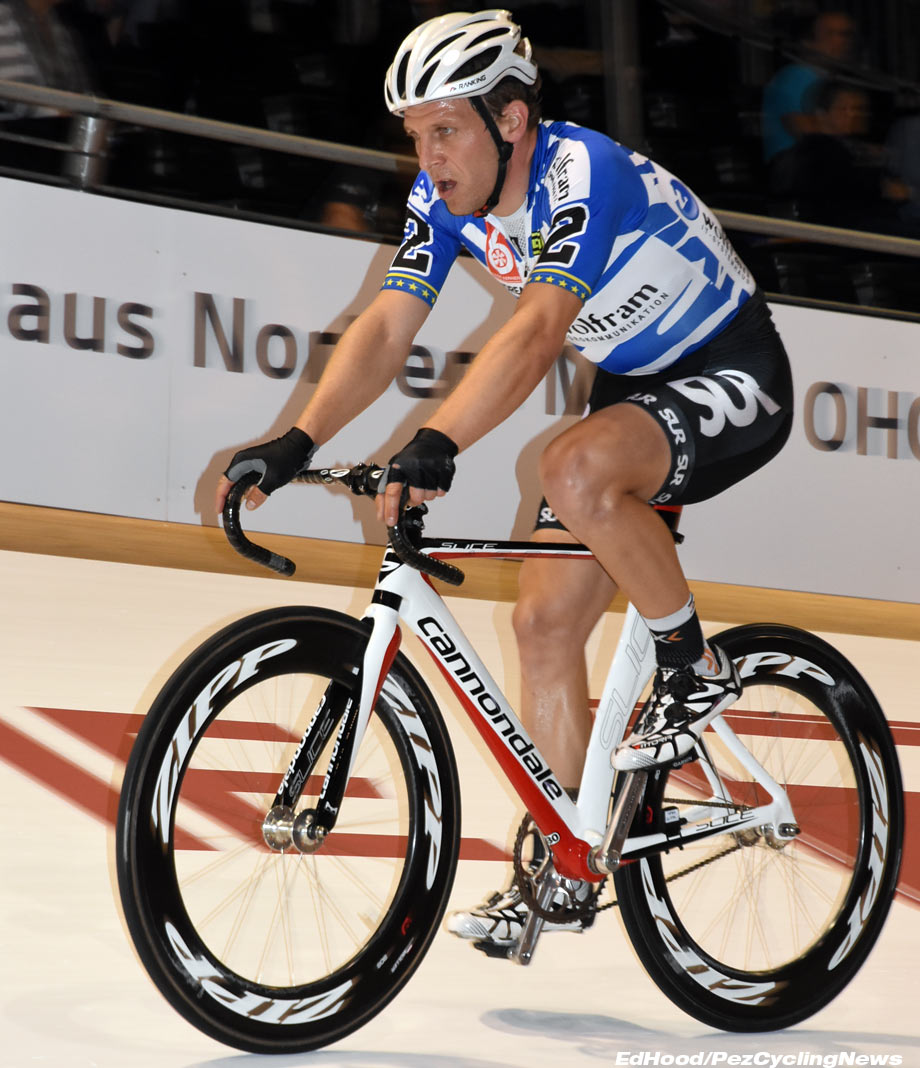 But let’s get started with a recap on the season so far through the eyes of soigneur, Kris. A man who’s as much a part of the European six day scene as Andreas Muller on 88 starts, over-priced beer, hamburgers, Euro-pop and bad haircuts.

Let’s start with London…
“It was good to see the race back and despite the logistical teething problems it was a glitzy show they put on. The 250 track and short races meant that it leaned towards the GB National Squad guys on their big gears. The promoters were brave to take it on – but maybe for next year they should take a wee bit more advice from folks who know the six day scene?

The races are the easy bit of a six day; it’s all the other stuff which goes with it. One thing I would say is that they should revise the track centre layout to let the public closer to the riders and mechanics – like it is at Gent. 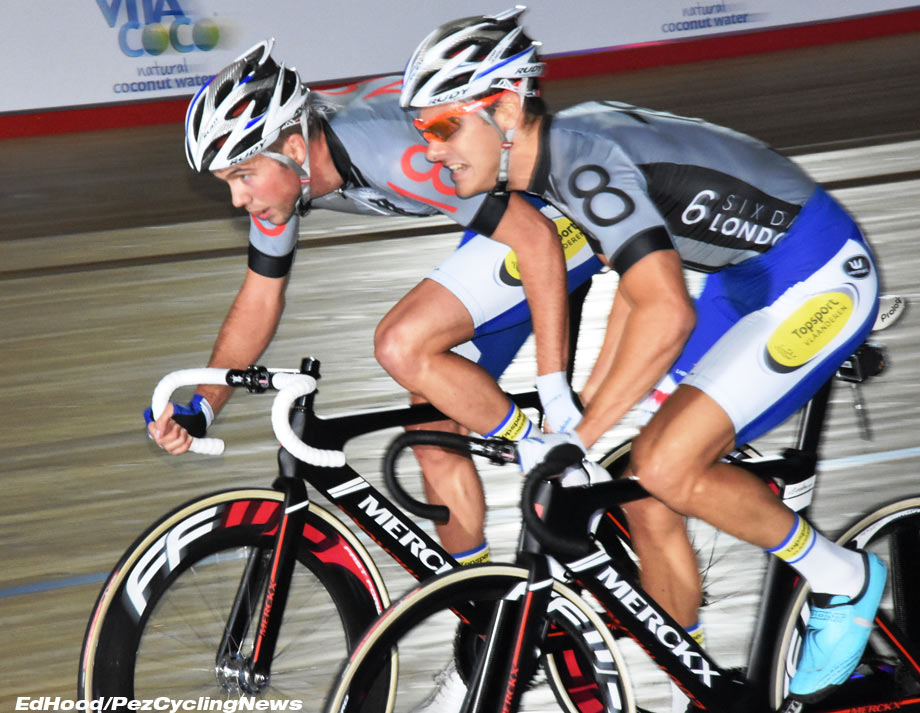 Of the actual racing, there’s no doubt that Kenny De Ketele and Moreno de Pauw were worthy winners.

Gent was next up…
“The first five days were good racing, the sixth day less so – the trouble is that you really only had two teams in the final picture, Iljo Keisse with Michael Morkov and Kenny de Ketele and Gijs van Hoecke. Jasper de Buyst has won the race twice but this year he was with Otto Vergaerde who’s still a young lad – they took third.

The atmosphere is still the same but not the field quality – Bartko, Risi, Marvulli, Betschart, Stam, Slippens, Schep, Zabel – all retired. And one of the current top six day guys, Leif Lampater has forgone the circuit to ride with his national team pursuit squad and shoot for the Olympics in Rio. 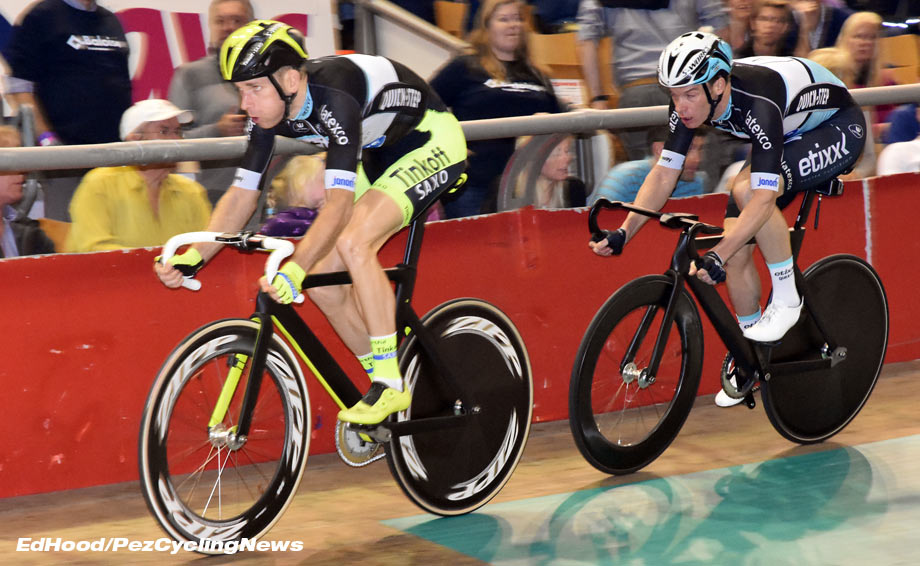 But the tradition is there, the student night, the VIP entertainment – it’s such a huge feature of the city’s social calendar.”

It was 2016 before the circus came to town again, Rotterdam this time, Kris says . .

“It was a good race, well organiZed and whilst you might say it was a surprise that the Spanish guys Alberto Torres and Sebastian Mora won, you have to remember that they’re quality riders – Spain has provided European and World Madison Championship winners in the last few years.

They’re very strong, riding big World Cup gears which a lot of riders can’t handle. The crowds were big every day; it was just like the old days – a decent crowd makes all the difference.”

Bremen saw the ‘squirrels’ return to the spiritual home of the six dayS in Germany, with Kris delighted to see the home of Becks Brewery reclaiming it’s reputation as the ‘Party Six.’

“I was a wee bit apprehensive about this one but it was well organised and the crowds were great. It wasn’t perhaps as wild as it used to be but Monday night saw huge crowds for the racing and for the other halls where there are bars, restaurants and discos. Next year they’re going to change the format to Tuesday to Sunday a la Gent so as you get big nights on Friday and Saturday then Sunday afternoon. The Tuesday night finale was a tad ‘flat.’ 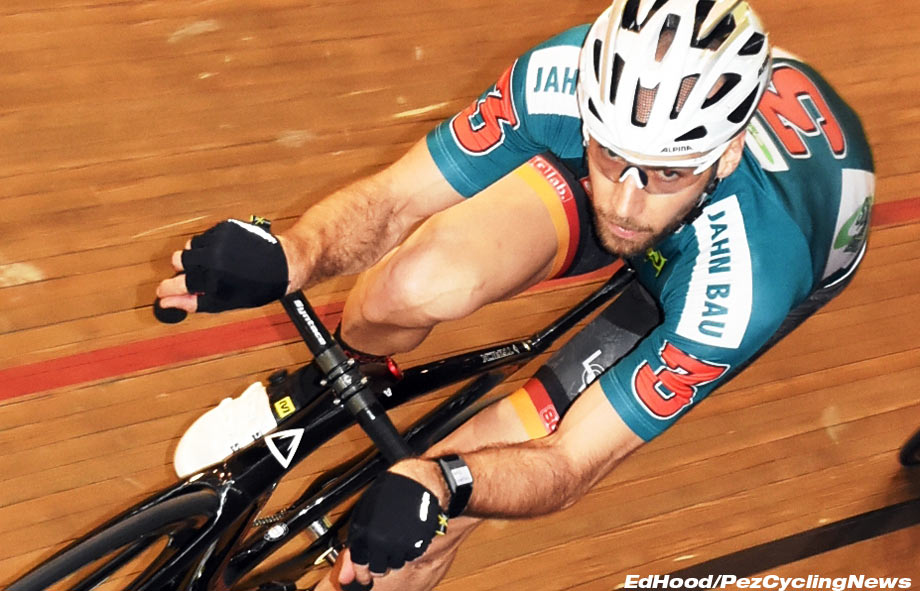 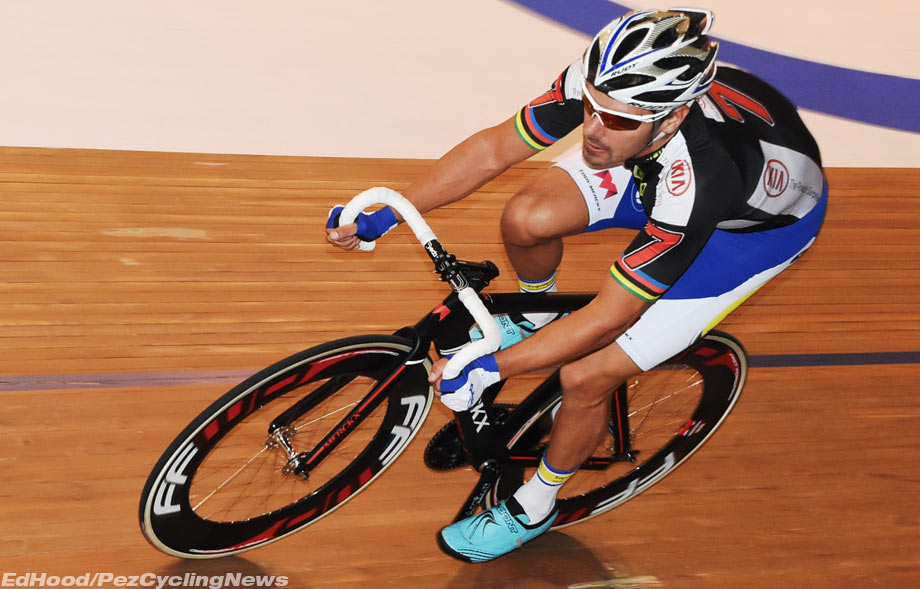 De Ketele won with Christian Grasmann; Kenny is one of the very best and Christian, whilst not one of the ‘big stars’ is going very well and he has 66 races under his belt.”

And that brings us up to date and here in Berlin – for the 105th Berliner Sechstage Rennen. 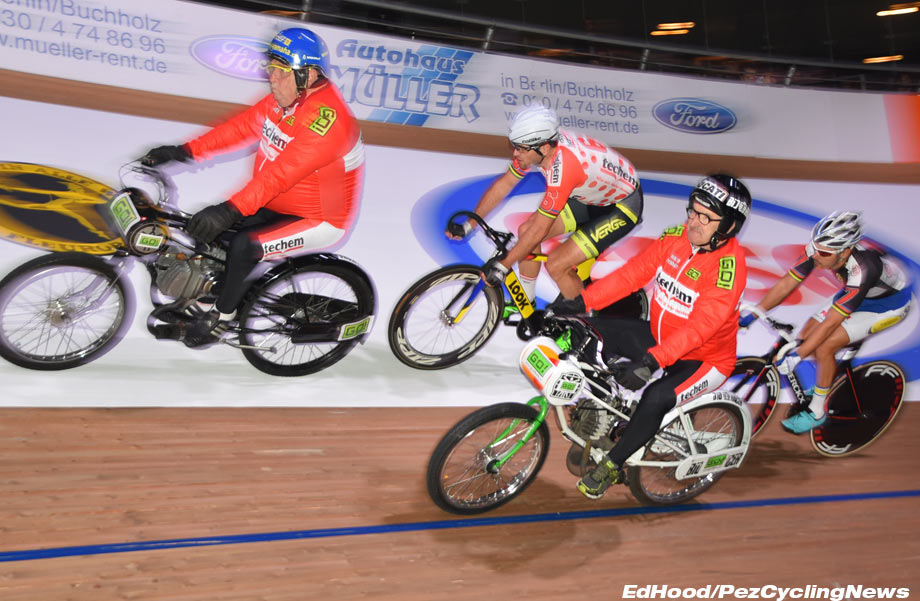 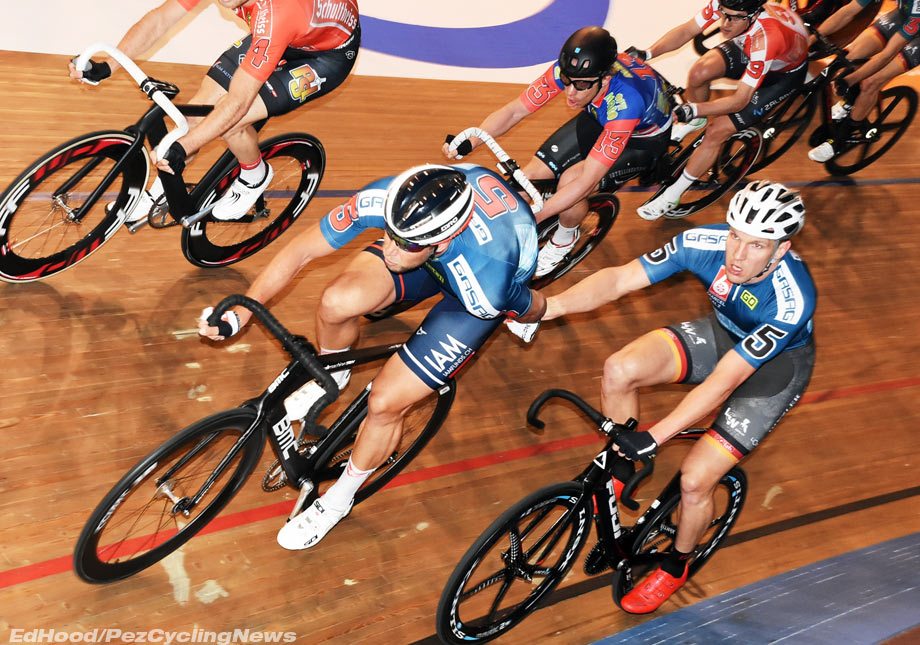 First up, we need STATS!

16 teams are here; Alex Rasmussen is numero uno in the win stakes with 10 wins off 43 starts; Kenny de Ketele with nine wins off 60 starts and Marcel Kalz (25 rides) and Roger Kluge (20 rides) on four wins each.

Most experienced man on the bahn is Andreas Muller on 88 (one win) starts, with Marc Hester on 86 (one win) and Christian Grasmann on 66 (one win).

The rider to start in Berlin most often was Klaus Bugdahl who rode 26 times – but up until 1970 there were two six days annually in Berlin. Bugdahl, unsurprisingly, is ‘record man’ on nine wins with Sercu and Post on seven, Thurau and Renz on six and Clark and Walter Rutt.

On the subject of ‘winningest’ the current German number one is Leif Lampater on nine.

We have four riders ‘on the books: 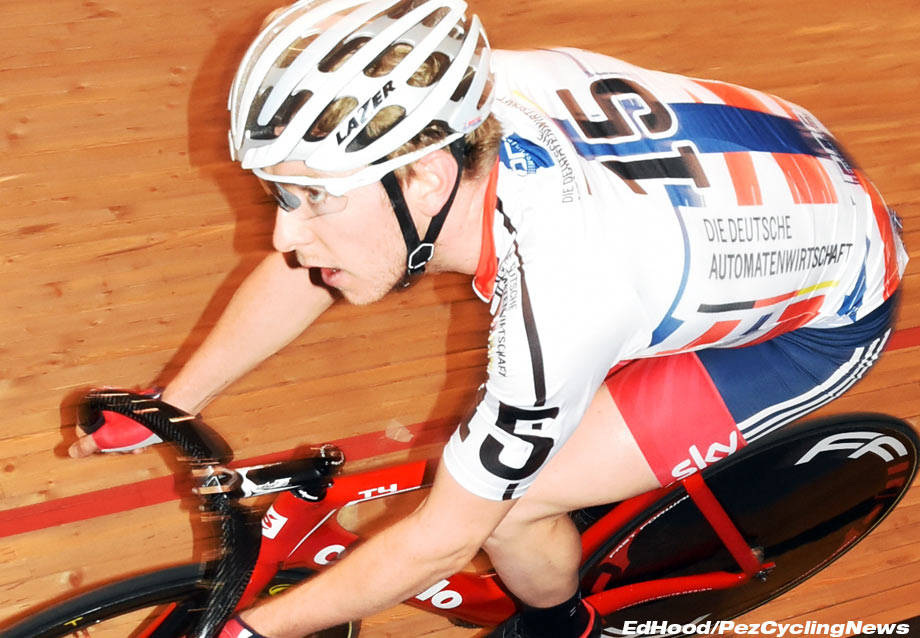 Mark Stewart from Scotland is a rising star on the boards, his latest success being the scratch race in the recent World Cup in New Zealand. 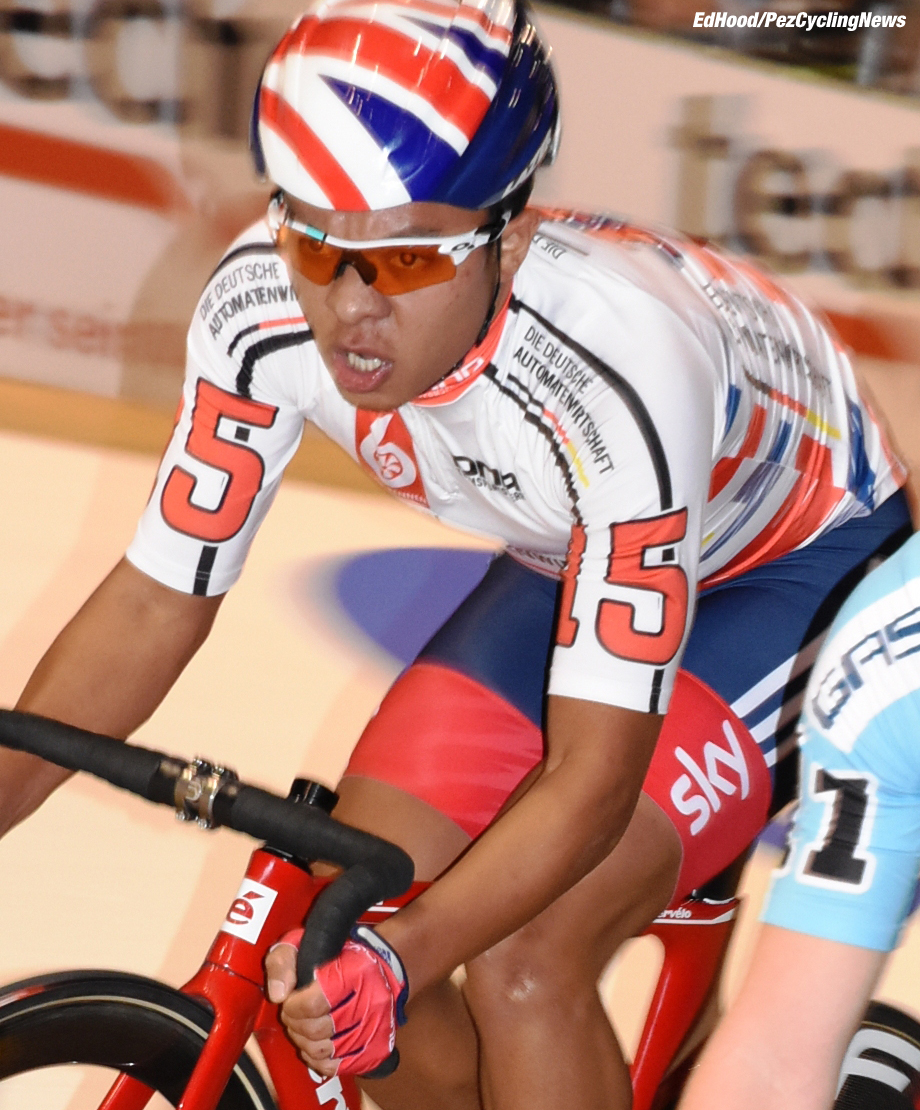 He rides with a man with the best possible genes, Germain Burton son of former 70’s six day man, Maurice Burton. Germain was in the GB team which rode to bronze in the recent Hong Kong World Cup. 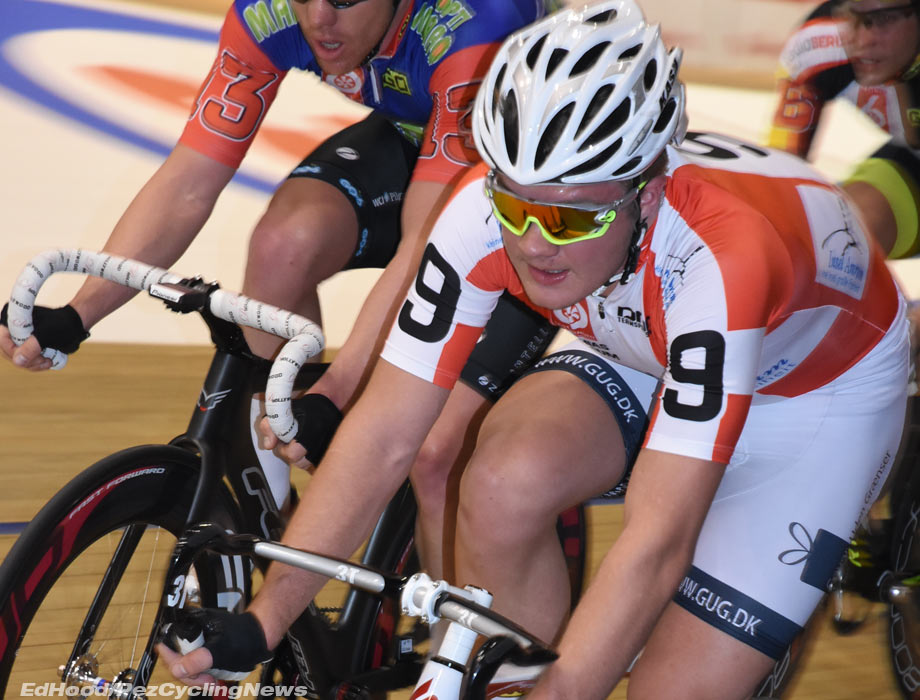 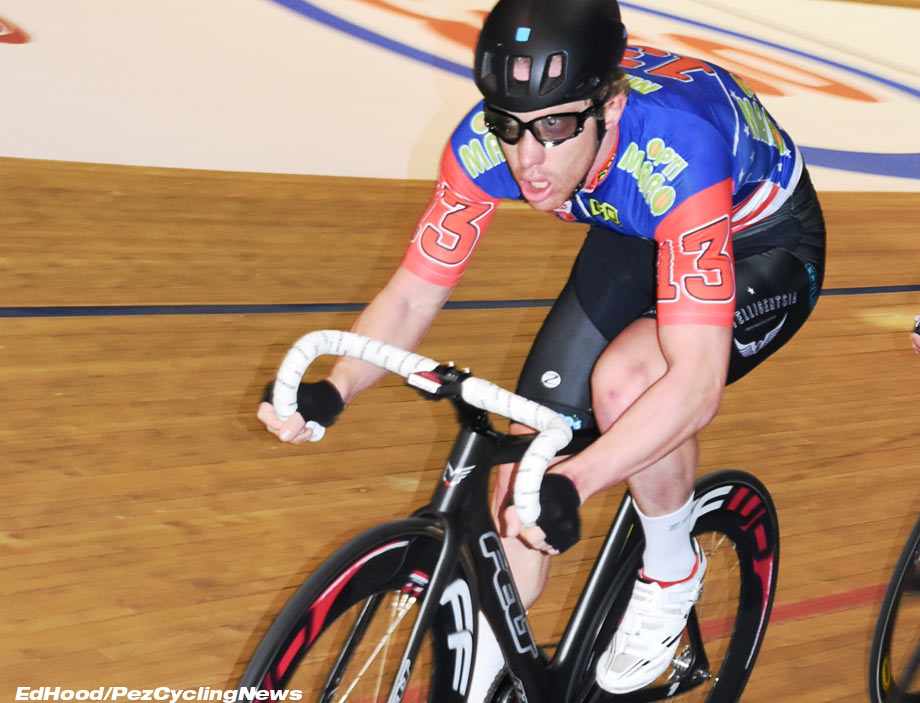 And our fourth man is ‘shrinking violet’ Daniel Holloway, current US Criterium Champion – he’s currently experimenting with a mini flame thrower for the head tube of his bike.

It’s never boring with that dude in the cabin. 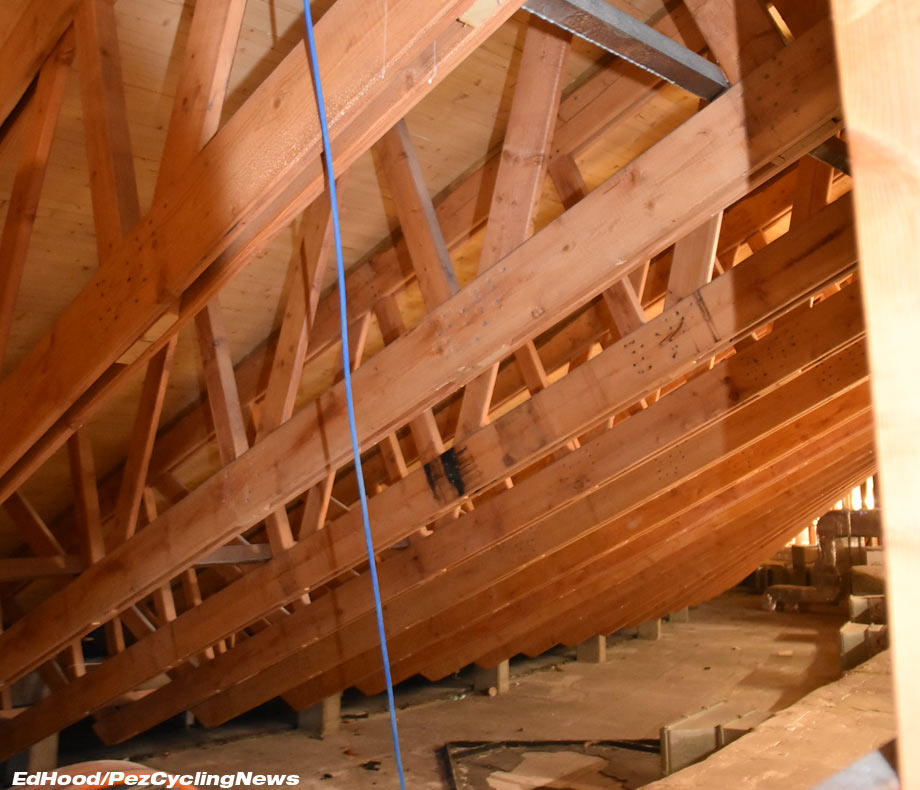 So stick with us as we take you inside the 105th Berliner Sechstage Rennen (and maybe even under the boards) – ciao, ciao. 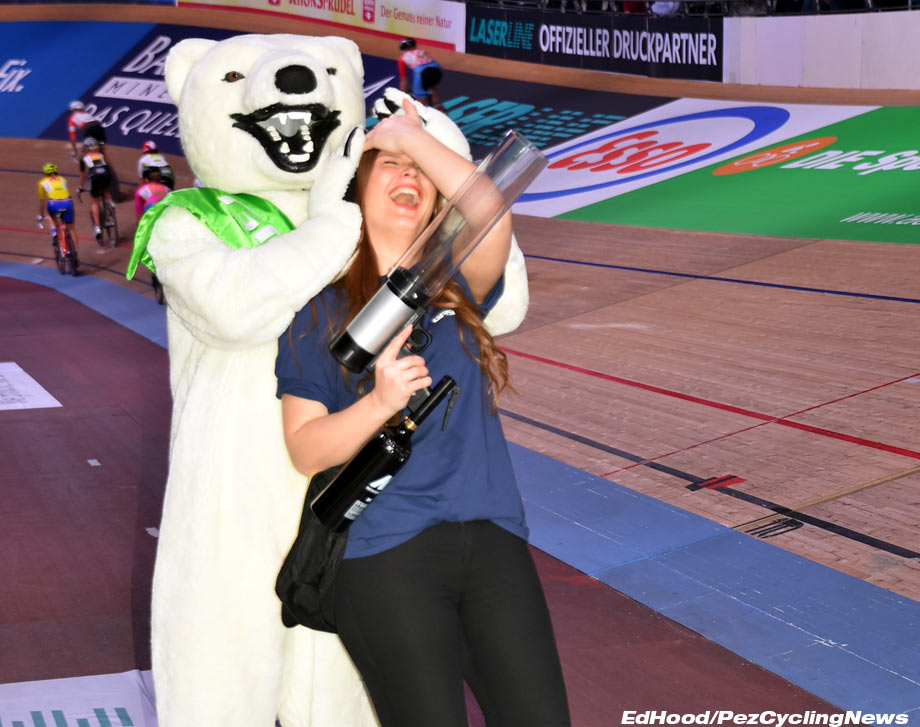